A Year Confined – Deja Vu and back again

A Year Confined – Deja Vu and back again 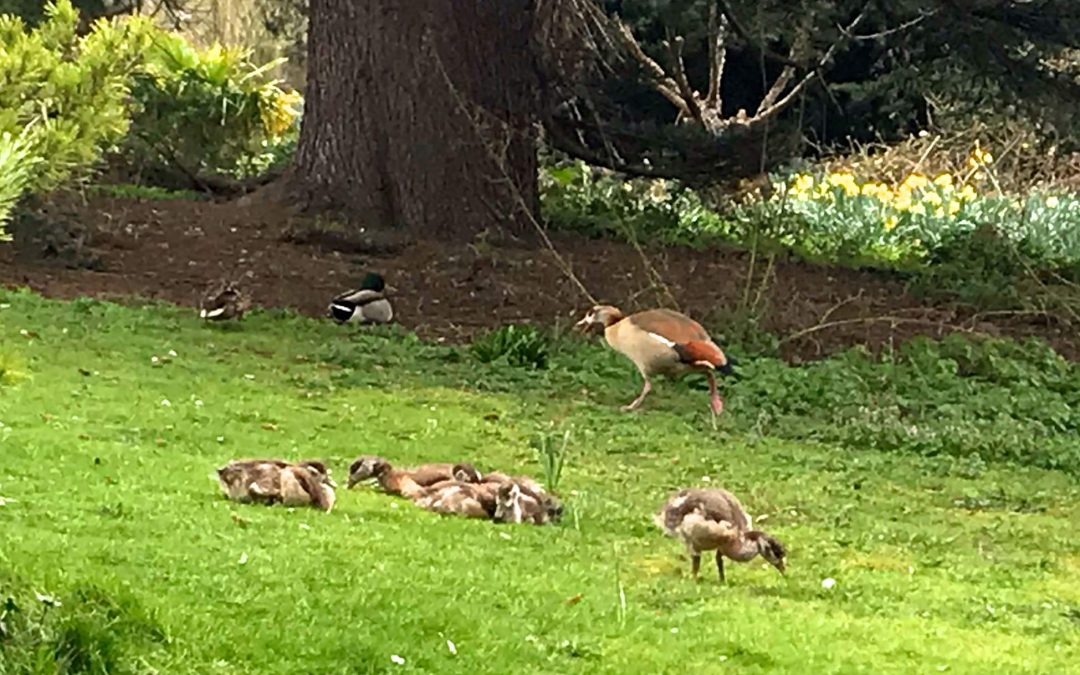 “Looks like nothing’s gonna change
Everything still remains the same
I can’t do what ten people tell me to do
So I guess I’ll remain the same, listen…… “

The Bell Strikes One

So, little did I know exactly a year on since the start of the first Lock Down that I would still be Blogging about my Covid experiences.

I posted just about everyday for the first four months, clocking in well over a hundred blogs. As the summer gave us a little respite I reduced that pace somewhat and including my weekly Chiswick Calendar contribution carried on until we find our selves where we are today. I expect to be posting until at least June 21st and even then, do we really know what the future holds?

My first Blog, excerpts of which are here, seem more than a little naive today……….

“So, like most of you I am stuck at home – or at least we are supposed to be – since BoJo’s announcement of a semi-lock down yesterday evening………………

I am a social animal so like so many of us – you – it is going to be interesting to see how we cope with social distancing, solitude, maybe loneliness, in emotional, psychological as well as physical terms. My normal day would be to leave the flat, just off Chiswick High Rd, at least twice a day, ostensibly to do daily shopping but inevitably to stop in one of my regular cafés/coffee shops either on my own or to meet up with the many friends that live locally. In the evening the walk would often end up in my local boozer, The Raven by Stamford Brook tube. I might take a book and sit quietly on my own to read or I might equally stay at the bar and chat with one of the fellow regulars I have got to know. Reading quietly alone in my favourite café or pub is still a social activity because I am surrounded, can observe and have the choice to engage with the people around me. Clearly, all that has now changed! Nevertheless, current guidelines are that we are allowed to walk out for necessary shopping and to take exercise and while that is still possible – because the shops are still open, the regulations still allow it and I am still free of symptoms – I intend to utilize that option – as I did today.

Up until BoJo’s announcement and despite his repeated ‘requests’ and ‘soft warnings’ Chiswick had been recognisable as itself. Clearly quieter than normal with pubs, cafes and restaurants closed for sitting in but mostly offering deliveries and take-aways but nevertheless busy enough to make physical distancing tricky. For example, the queues in some shops were standing a couple of metres apart but others were too crowded or badly organised. Today (Tuesday) I popped out around 1 pm as I wanted to buy bread and post a book….. There were very few people around, visibly less than the weekend. The pharmacy where last week I queued for 30 minutes was completely empty. Most non- essential shops were shut and had signs of varying quality and clarity taped to the inside of their doors. Obviously the many High Road Cafes were shut though some had tables outside selling their wares for carrying away and others had notices on how to order take-aways and whether they did direct deliveries. There were a few Deliveroo riders lolling around on their bikes in the weak sunshine though I imagine they would be busy later in the evening. It was a somehow ‘discombobulating’ experience to see the popular trendy places such as High Road House, normally always busy, so eerily silent. The few walkers were pretty focussed on keeping a couple of metres apart as they passed and quite a few had masks………….

One of the themes of this blog will be that we all need to remember those traders and services that did give a shit during the crisis and give them our patronage afterwards. Those that are not looking after their staff that price gouge and take advantage should be boycotted thereafter…….

So, I think that is enough for my first ‘Corona Blog’ – I suspect this will be a long season, assuming I have the energy and someone somewhere actually reads it.”

One thing that strikes me is that I clearly realised that my daily ‘constitutional’ would become a life saving element of my survival kit. Before then I may have visited Ravenscourt Park a few times whereas now it is like a cherished old friend. It seems in my head to symbolise the mental ups and downs of this year. The different seasons, changes in the numbers and types of people and the uses they put to the open space: can I walk with one friend socially, less than six, sit down on a bench with my coffee or keep on moving under the watchful eye of a zealous community officer? Sometimes it has felt like I am in a time lapse bubble standing on the path while a world of differences flash past me. I am standing still surrounded by small children on bikes, dogs in little coats, joggers in lycra, huddles of schoolgirls catching up on gossip, mums following toddlers on the loose, dad’s wearily kicking the ball back to four year olds with Chelsea shirts, picnickers, park keepers and policemen while different weather and cloud formations zoom past time lapse fast in my ‘like sci-fi but it isn’t’ head.

Yet despite this the park bird life has ignored the human saga rampaging all about it and carried on its seasonal cycle as it did last year and will next. To close my eyes and focus on the sound of birds and push the people noises into the hum of background…… pauses …… breathes ……. sighs.

I posted just three weeks ago a picture of the early breeding Egyptian Geese and their family. 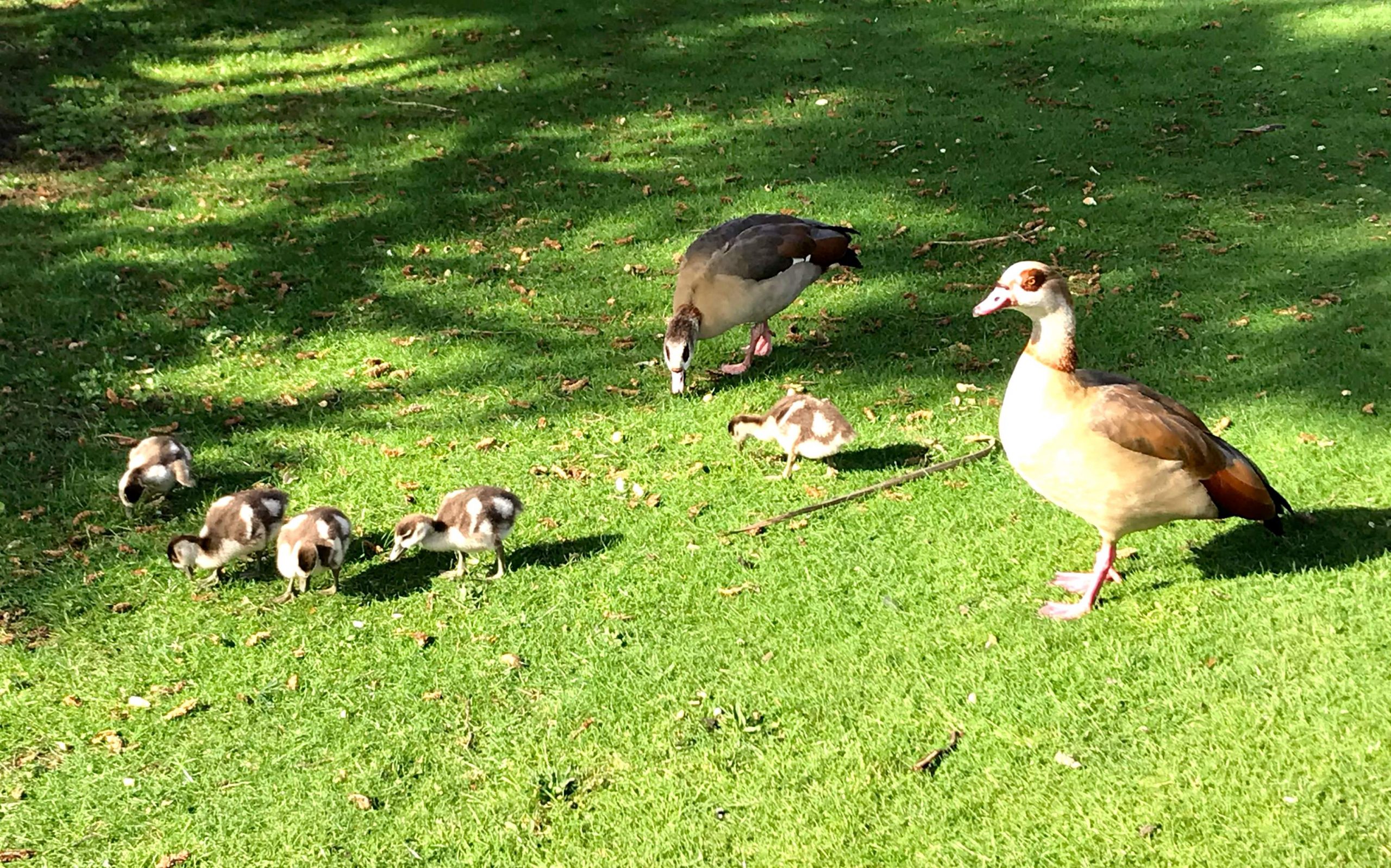 They are certainly growing and Mum and Dad are still chasing away any duck that encroaches on their space. See for your self the difference. 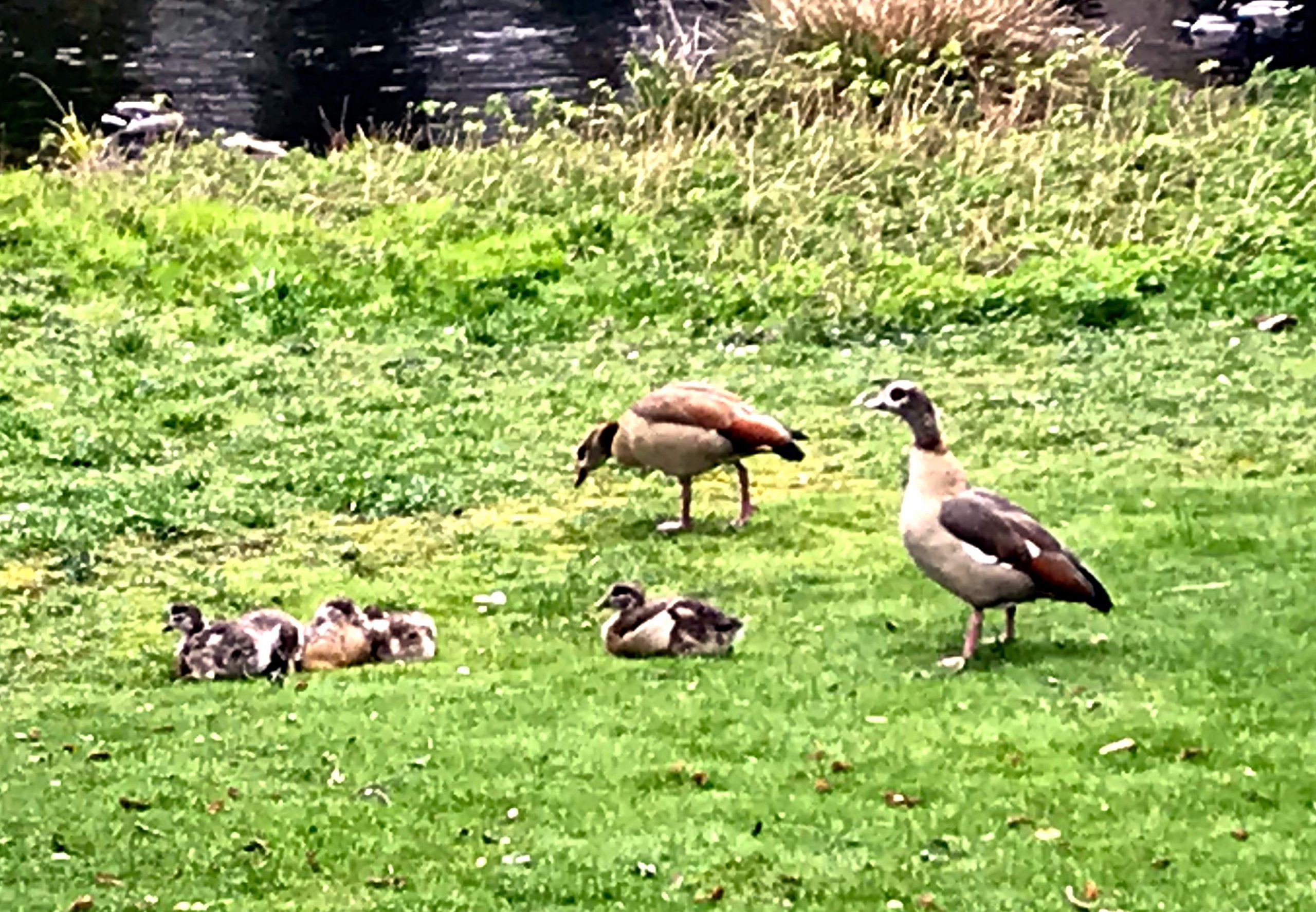 This and the Header picture were taken on 20th of March and they seemingly grow everyday.

I also strolled with some friends into the little ‘wilderness’ and we checked on the pond. There has been some slightly random attempt to hack away some of the undergrowth and clear the accumulated weed but as can be seen the frog spawn is at its cyclical pre-tadpole stage. 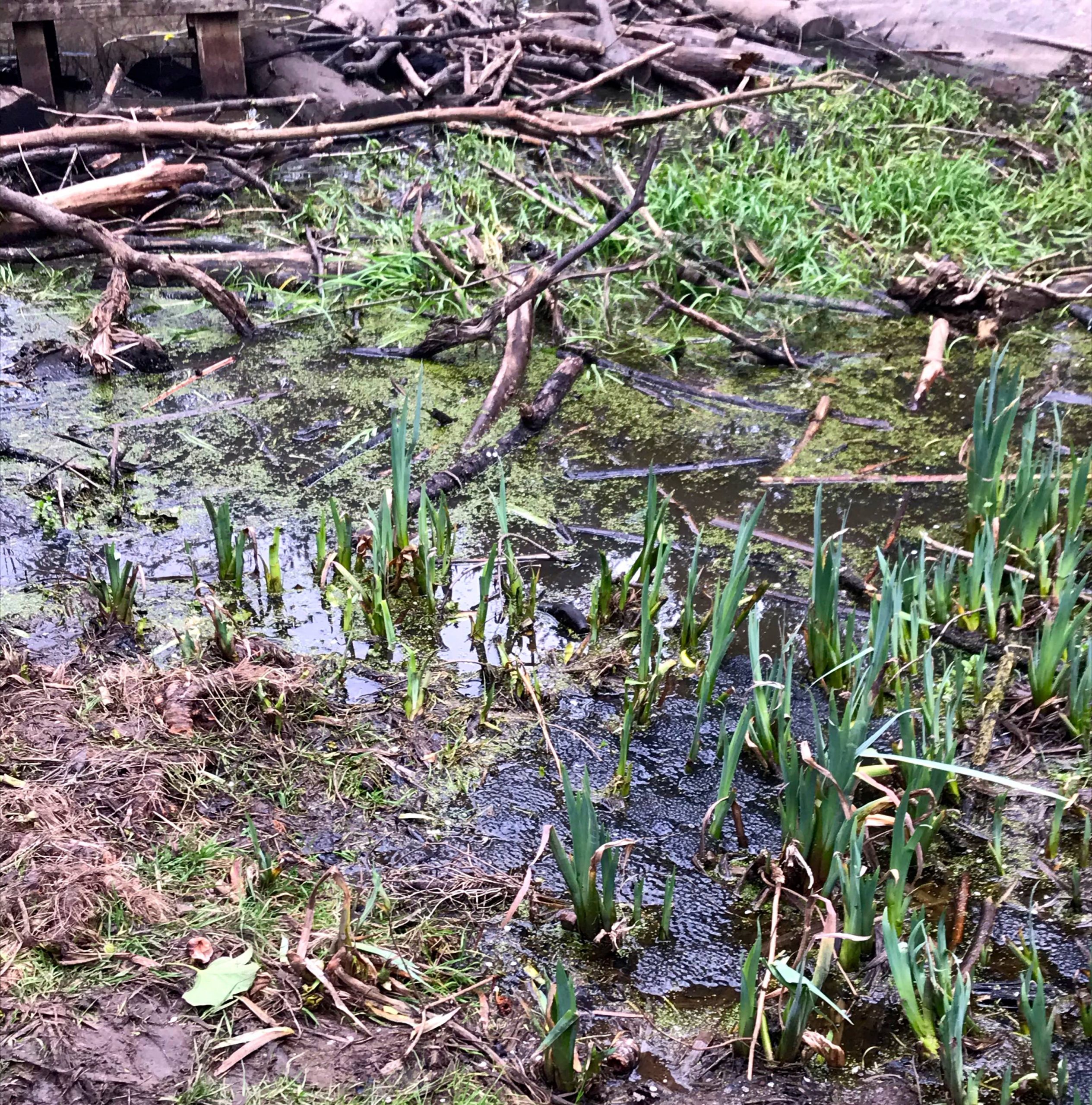 Said friends had in the past stocked their garden pond with some of the same genetic material and years on it looks a great deal healthier in cleaner and better oxygenated water than the natural mud pool. 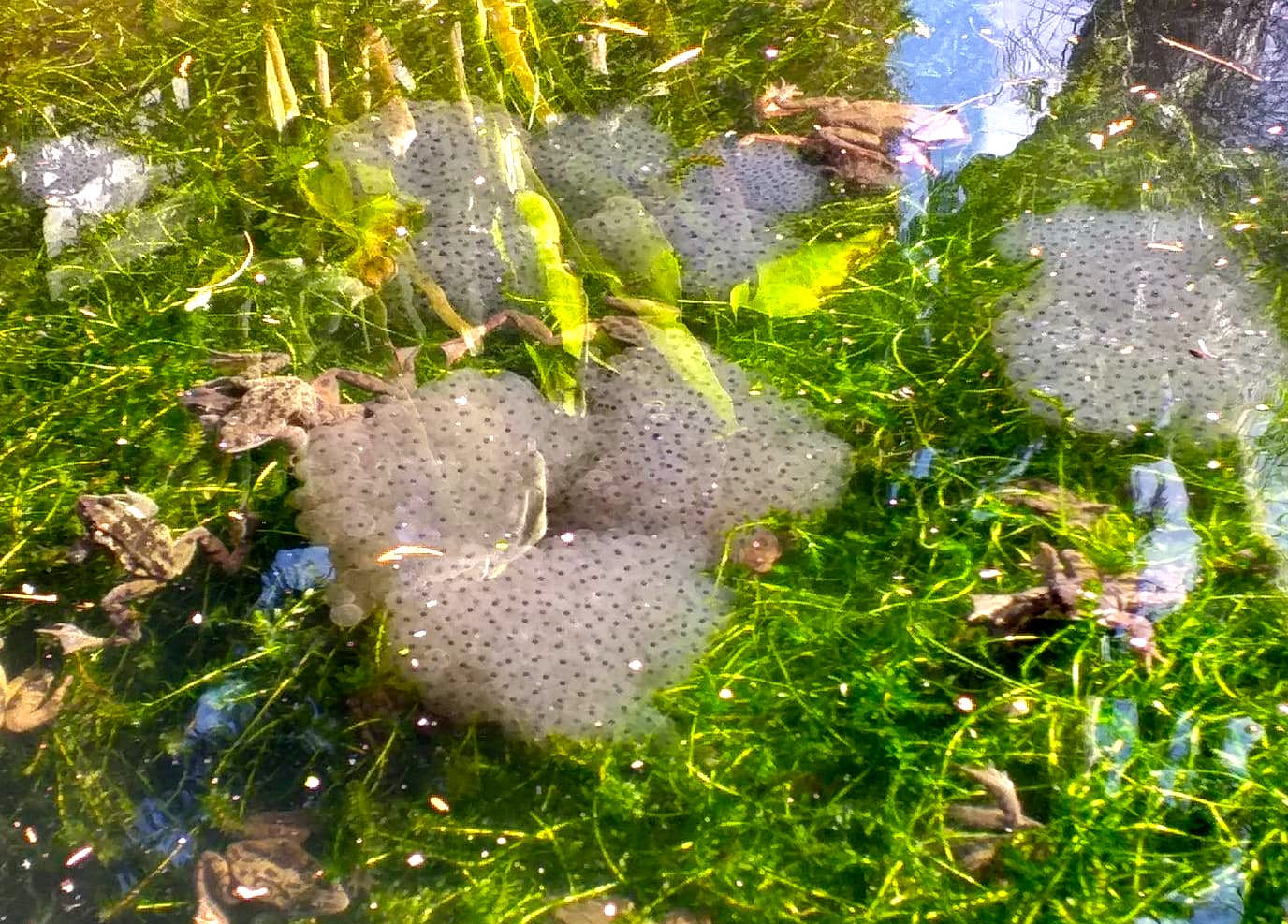 The domestic pond looking somewhat cleaner but I suspect the tadpoles wont care as long as there’s enough water in the park’s wilderness pool.

Memories of short trousered, brown kneed returns home to Mum with my tadpoles in a jam jar or a newt in a match box.

We will be processing our memories of this last twelve months and the whole Covid experience for years to come. What will be the same? What will be different? My relationship with Ravenscourt Park will never be quite as it was. When Dave welcomes me back to The Raven for that pint of my dreams there will be a little Park mud on my shoes as there will be forever in my Lock Down memories. I just hope I am not still writing this same blog in a year’s time.

The song nearest the contemplative mood of today’s Blog, that I can think of immediately but delighted to hear other suggestions, has to be this one. It was written in 1967 and released as a single posthumously in 1968. Listening to it always makes me wish I could whistle.