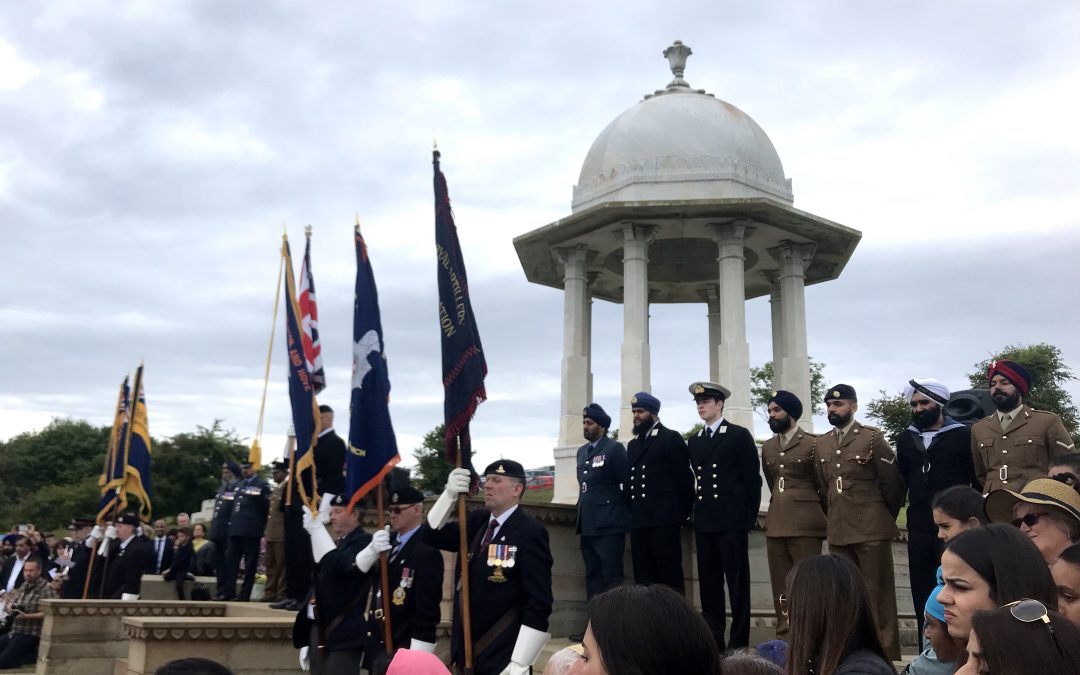 There are some signs of an increased understanding of the importance of the contribution of people of colour to both the UK’s history and, in the case of previously occupied nations where the curriculum is often still a colonial legacy, to that of The British Empire. Champions of Black British History, like David Olusoga, Miranda Kaufman and Akala have managed to bring the subject into the spotlight and into the glare of mainstream media. In the last couple of years Olusoga’s “Black British History: A forgotten History”, Kaufman’s “Black Tudors: The Untold Story” and Akala’s “Natives: Race and Class In The ruins Of Empire” * have been instrumental in furthering my understanding of how we need to revaluate the legacy of racism and colonialism within British History with particular reference to the impact of ‘The Empire’. Even the BBC has given airtime to somewhat watered down documentary versions of these and other programmes that can still be caught on catch up TV.

However, closer to home, I have been taught a great deal by an old mate of mine, Davinder Dhillon. Dhill and I go back to 1973 when we started at the then Brighton College of Education to train as teachers. That path was not for me but Dhill spent a 30-year career teaching in Brighton and it’s environs. That alone is commendable in itself but this piece is about his fight to achieve proper awareness of the role of Commonwealth soldiers in the First World War and in particular recognition of the many Hindu, Sikh and Muslim soldiers who were hospitalised and died in Brighton in 1914 and 1915.

In ‘The Great War’, as it was called, over a million soldiers and non-combatants from the (pre-partition) Indian Army were sent to fight for Britain and over seventy four thousand perished. On 30th September 1914, just six weeks after the declaration of war, ‘Indian Expeditionary Force A’, comprising some 150,000 men and (European only) officers, arrived in Marseilles. Ill prepared, with unfamiliar equipment, a lack of cold weather uniforms and with no supporting artillery they were immediately pressed into service at the battle of La Bassee where the Allied troops suffered over 14,000 casualties, of which some 1,565 were Indian. In fact, at the start of the war, one in three British troops on the Western Front were Indian. Indian troops fought in the Somme, at Ypres, the advance on the Hindenburg Line and at the battle of Cambrai among others. Over 9,000 died at the Western Front but they, along with the hundreds of thousand of Chinese labourers used for digging trenches in appalling conditions or the French colonial North and West African troops hardly merit a mention in standard history texts.

Clearly, as seriously wounded Allied Troops were returned to Britain for treatment there needed to be a place for them and a couple of Brighton’s schools and the Dome and The Royal Pavilion were transformed into hospitals. The recovery rate was actually pretty good as it appeared the treatment was sound and it should be considered that weaker casualties would not have made the onerous trip from the Western Front alive. There was an expectation that survivors would be returned to the front line, a contentious issue amongst the troops. Overall, some 12,000 Indian troops were hospitalised in Brighton at some stage and 72 (some sources say 74) died there. The 53 Hindu and Sikh soldiers were cremated at a spot on Patcham Downs and their ashes scattered in the sea. The 19 Muslims were buried in a Memorial Ground near the Shah Jehan Mosque in Woking. The original suggestion for a permanent memorial to the Indian Troops was from Lieutenant Das Gupta (a Medical Officer) whose idea was supported by the then mayor of Brighton. In 1921, after delays concerning funding, the memorial known as The Chattri was unveiled with the following inscription,

“To the memory of all the Indian Soldiers who gave their lives for the King-Emperor in the Great war, this monument, erected on the site of the funeral pyre where the Hindus and Sikhs who died in hospital at Brighton, passed through the fire, is in grateful admiration and brotherly affection dedicated.”

Unfortunately, arguments about funding the necessary maintenance and through general neglect the site fell rapidly into disrepair. Even after the Second World War (when it had actually been used for target practice by Canadian troops training for the Normandy Invasion) it took until 1946 for the war Office to accept responsibility for repairs.   In 1950 the British Royal Legion took on responsibility for organising a memorial ceremony each June. This continued until 1999 when declining numbers and old age meant they could no longer continue. At this point my mate Dhill, himself a proud Sikh, stood up and took over responsibility.

Dhill took over the administration and organisation with almost no support at first except his wife Wendy and their family. They even invited visitors home and made the tea and sandwiches themselves. Over the years Dhill (who is a stubborn bugger at times!) badgered and harassed various civil society and military organisations and received some modest financial and moral support until at last he achieved the respect that his fallen forebears deserved.

“With representatives of the Undivided Indian Ex-services Association from various parts of the United kingdom present, as well as the Brighton and Hove Hindu elders Group, the deputy Lieutenant of the County, the Mayor, members of the armed forces and police and many local people, a unique yet fittingly dignified yet inclusive, warm and friendly memorial service is maintained.”

This year I was able to attend and was so impressed at what my friend had achieved. The half hour inclusive ceremony included Indian prayers and wreath laying and was attended by local dignitaries and the Deputy High Commissioner of India. Some 500 people of all colours attended the commemoration. An Indian restaurant from Covent garden has also supported the event for a couple of years by providing a full vegetarian meal for visitors that is served up at a local school and now the British and Indian Armies are well represented as well as many Sikh and Hindu organisations. Dhill, though modest, has been honoured with a Buckingham Palace garden party and nearer to home by the Sussex establishment. He was even taken by the Indian Army to receive recognition back in India where he was received in full military tradition. 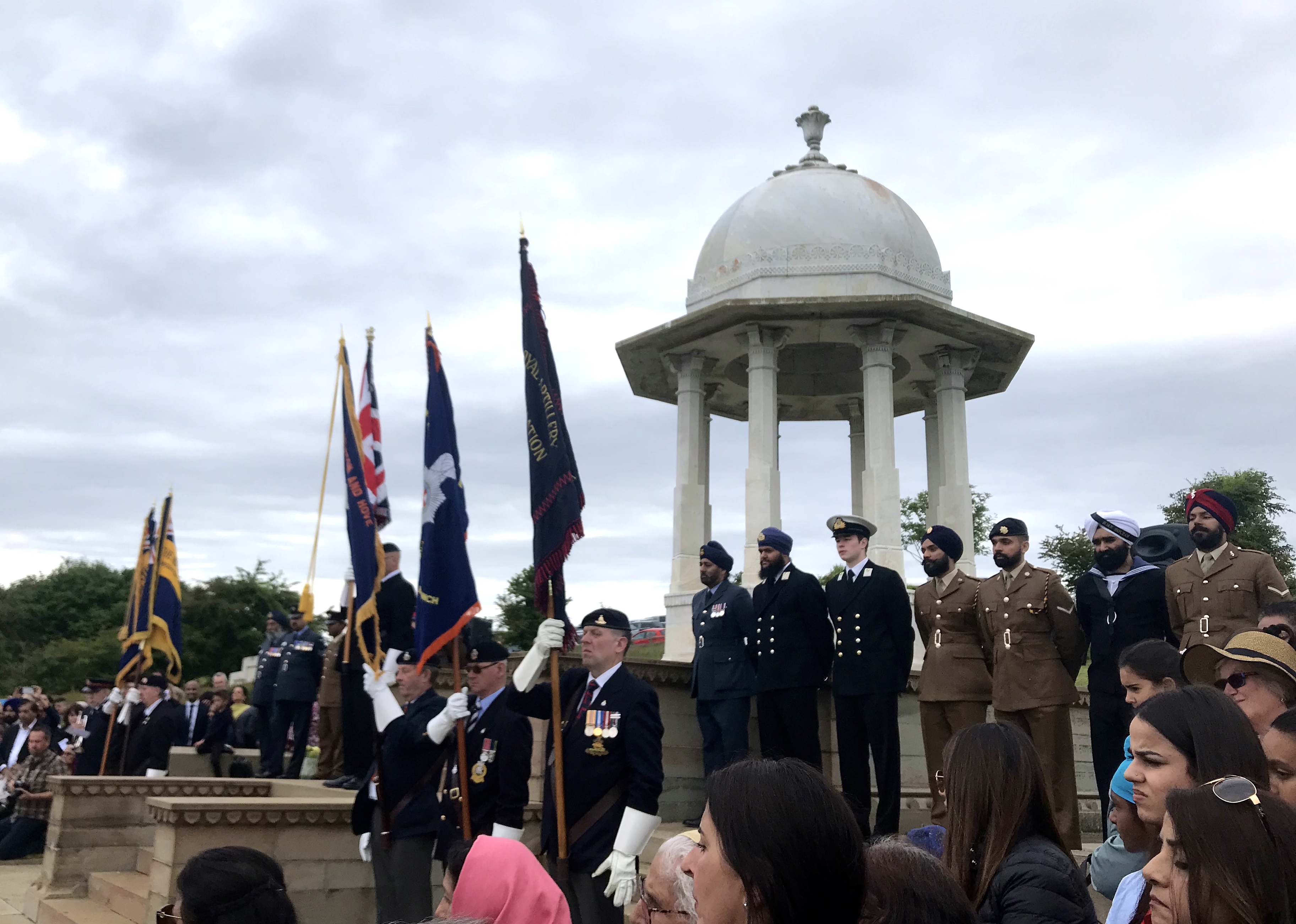 Indian and British Military as well as veterans honouring the soldiers of pre-partition India at the Chattri in 2019. 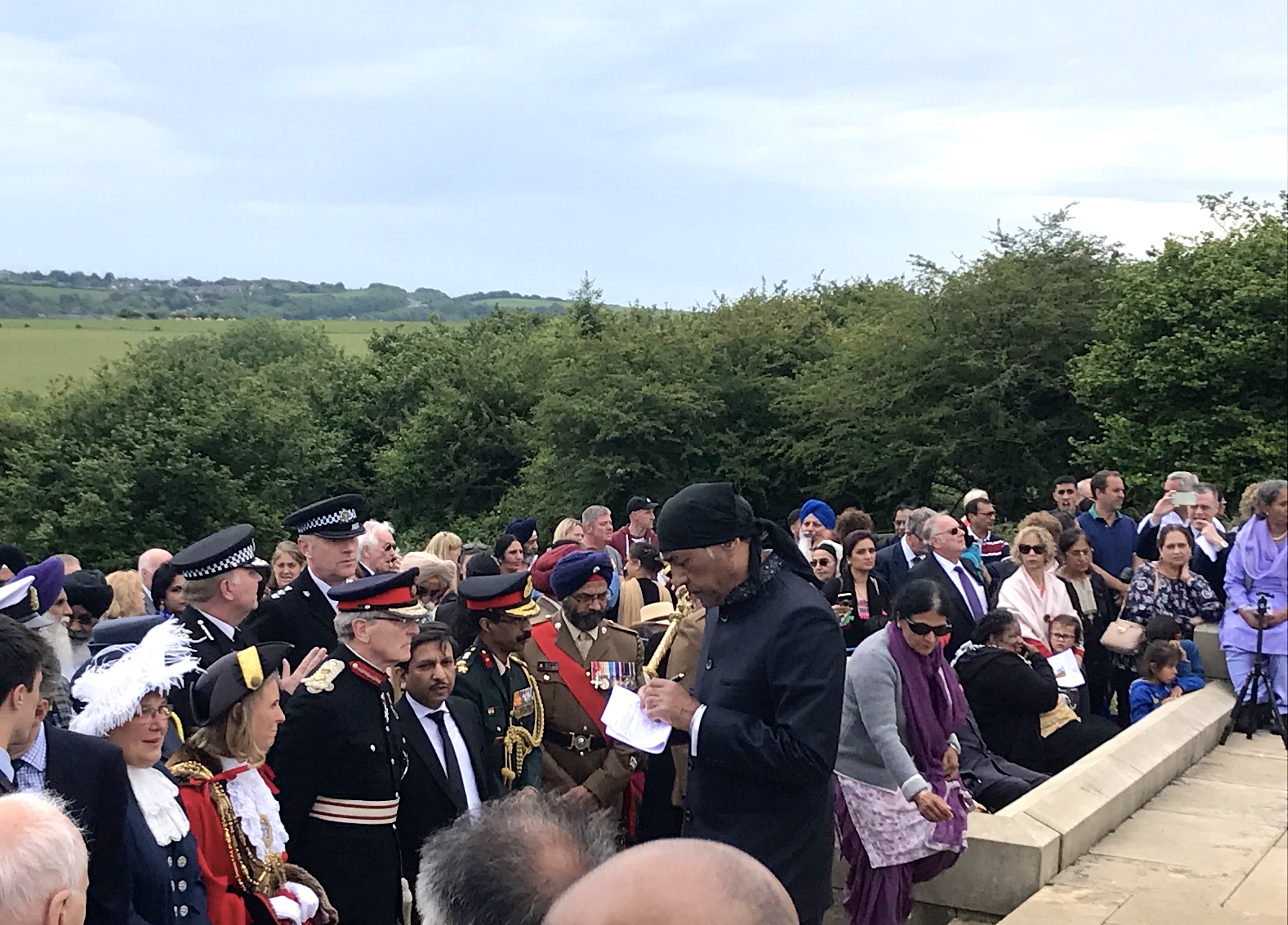 My mate Davinder Dhillon ‘Dhill’ preparing for the 2019 Chattri event with some of the representatives of Military and Civil society on the site overlooking the beautiful Sussex Downs.

However, Dhill has not finished there. While he and his family still shoulder the burden of the Chattri Memorial organisation he is devoting more time in seeking to have another historical Indian Brightonian given recognition. Din Mohammed was born in North India in 1759 but when he was eleven he moved to Ireland with the military officer he served. By 1786 in order to marry his protestant sweetheart, Jane Daly, he was forced to change his religion and his name and he became Dean Mahomed and moved to London, where he opened a “Hindoostani Coffee House” that was effectively Britain’s first Indian restaurant. He also wrote his memoir “The Travels of Dean Mahomet” which was the first ever book by in English by an Indian or from an Indian perspective published in Britain. Around that time he also gave himself the honorific of ‘Sheikh” which was anglicised to “Sake”.

Sake Dean Mahomed arrived in Brighton in 1814, setting up his ‘Indian Vapour Baths and Shampooing Establishment’ close to the Palace Pier, on the site of what is now the Queens Hotel. As Brighton became known as a Spa Resort and the Prince of Wales favoured retreat Sake Dean himself prospered from the fame of his personal combination of Eastern and Western cures. He was even appointed ‘shampooing surgeon’ to both King George IV and William IV.

Such an important character both for Brighton and in the history of Britons of Colour deserves proper recognition and Dhill has instigated a campaign for Sake Dean Mohamed to be commemorated with a Blue Plaque.  Provisional approval has been given but Dhill needs to raise about a thousand pounds to cover the cost and manufacture of the Plaque itself. If you would like to support the campaign or the Chattri event financially please either: