“Not seeing race does little to deconstruct racist structures or materially improve the conditions which people of colour are subject to daily. In order to dismantle unjust, racist structures, we must see race. We must see who benefits from their race, who is disproportionately impacted by negative stereotypes about their race, and to who power and privilege is bestowed upon – earned or not – because of their race, their class, and their gender. Seeing race is essential to changing the system.”

So, I started this blog late Sunday afternoon with the words…….

Don’t know why. Saturday was a reasonable day. Saturday Blog done at a reasonable time. Son George and I went for a walk in the evening after the worst of the rain, brought home Fish & Chips and watched some TV. Pretty normal. Got up, had my usual morning routine cuppas and then did virtually nothing but follow Black Lives Matter protests and the pathetic response to them particularly by various politicians on this side of the Atlantic. Meanwhile, the rain came down some more and followed my mood. Maybe I felt guilty: that I should have been at the protests around London or that my Blogs should have been more overt on the matter. I have tried to make it clear what my views are. Knowing that the Blogs are read in different places with people with different views and interests I try to mix up the topics but even where writing more generally I have tried to use epigrams and music references that speak to the current debates on BLM. There is also part of me that thinks that I do not have the right to lecture anyone – after all, I am an entitled beneficiary of slavery and empire. All white Brits are, of course, because the country’s wealth and position in the world reflects the conquest and the use of resources taken by force. I am the holder of an OBE. That means I am an Officer of the Order of the British Empire. When I collected it from the Queen at Buckingham Palace I took my sons and my father. He was in his mid ‘80’s and told me it was the proudest day of his life, which is a pretty special thing to be able to do for your Dad and just a couple of years before he passed away. But now I think that I should give it back unless the use of the word ‘empire’ is dropped.

Anyway, don’t think that all this means that because I was not feeling my usual positive self it was ‘all about me’ because it absolutely isn’t. One thing I have learned during the journey towards at least partial understanding is that the way to piss off my black mates is to be defensive and take the ‘its not my fault’ stance. In fact, I was still being generally unproductive this morning until I went for my shopping and exercise stroll down Chiswick High Rd and saw this. 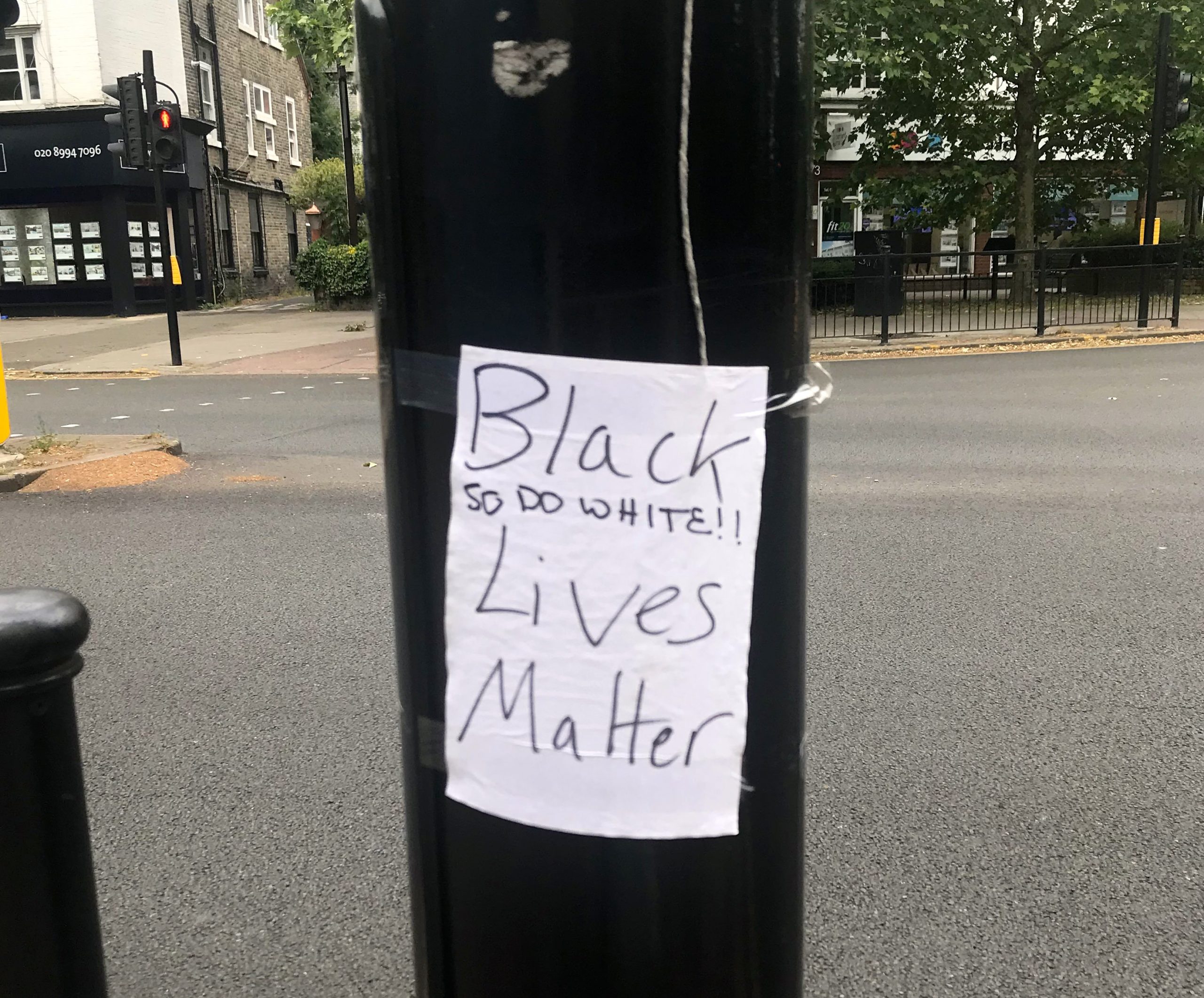 Now, I cannot quite tell if someone had written, “so do white!!” over an existing Black Lives Matter sign or whether they had taken the time to write the whole thing and stick it up. I didn’t see any other signs along the road. So, yeh yeh – we all know that every human matters but the whole point is that if all lives mattered than there would not need to be a Black Lives Matter movement, would there? The truth is, too often black lives don’t matter or at least not as much as white lives. Forget what’s going on in the US – here in the UK there is complete denial. Just listen to Johnson, Patel, Hancock and the other Gammon being rolled out across the media!

Bringing it closer to home and making it real ……..regular readers of my Blog will know I am the Chairman of my school old boys’ rugby club. This past season one of our Black players was racially abused during a match. He complained to our team captain, who complained to the referee who gave the offending player a yellow card (a slightly weird decision but, it is what it is). I was not present but I was informed of the incident and we made an official complaint to the governing body: Middlesex RFU. There was an attempt at an investigation and there was a hearing of sorts but I have to say not happy with the outcome and we are in a process concerning my letter of complaint at how the matter was handled. However, I am proud to say that our player felt his teammates and his club backed him up to the extent that his Mother came down the club afterwards to say thanks. She watched her son play a game and we had a few drinks in the bar afterwards, though she felt our selection of rum was not up to her standard! We had a lively discussion in the bar with a number of the lads who said something like ‘but it (racism) is not that bad these days is it?’ and were then shocked to hear some of the everyday instances that their mate’s family had had to put up with. They are good lads and were shocked ‘but mate, you have never told us about any of this…..’. Of course, our guy just said ‘why would I?’

This is the point. Until there is a recognition of the racism that exists in British society and that will require substantial education on the true history and role of empire and colonisation (of which slavery is a significant part), including how the truth about how much Britain benefitted economically, there will continue to be deniers and people writing ‘all lives matter’. I have recommended it here before but this conversation is exactly why I suggest reading Akala’s “Natives: Race and Class in the Ruins of Empire”. Actually, it was really only when I retired and came back from Nigeria in 2017 that I realised how bad things were – in fact how they had regressed, partly as a result of the Brexit xenophobia. Just in case you don’t believe me here are a few of either my experiences or those that have been shared with me:

None of my BAME friends will be remotely surprised at these examples and many will have experienced worse but I am sure many of my white readers will be surprised or think I am exaggerating. By the way I offered to make formal complaints about the police and the judge or to write them up but my friends just said it would make their case more difficult and asked me not to. All of these have been in the last three years.

So, this entire ramble is to say that I am glad that the statue of Bristol slaver Edward Colson was pulled down. I think it is completely understandable that Black youths kneeled on it for eight minutes. 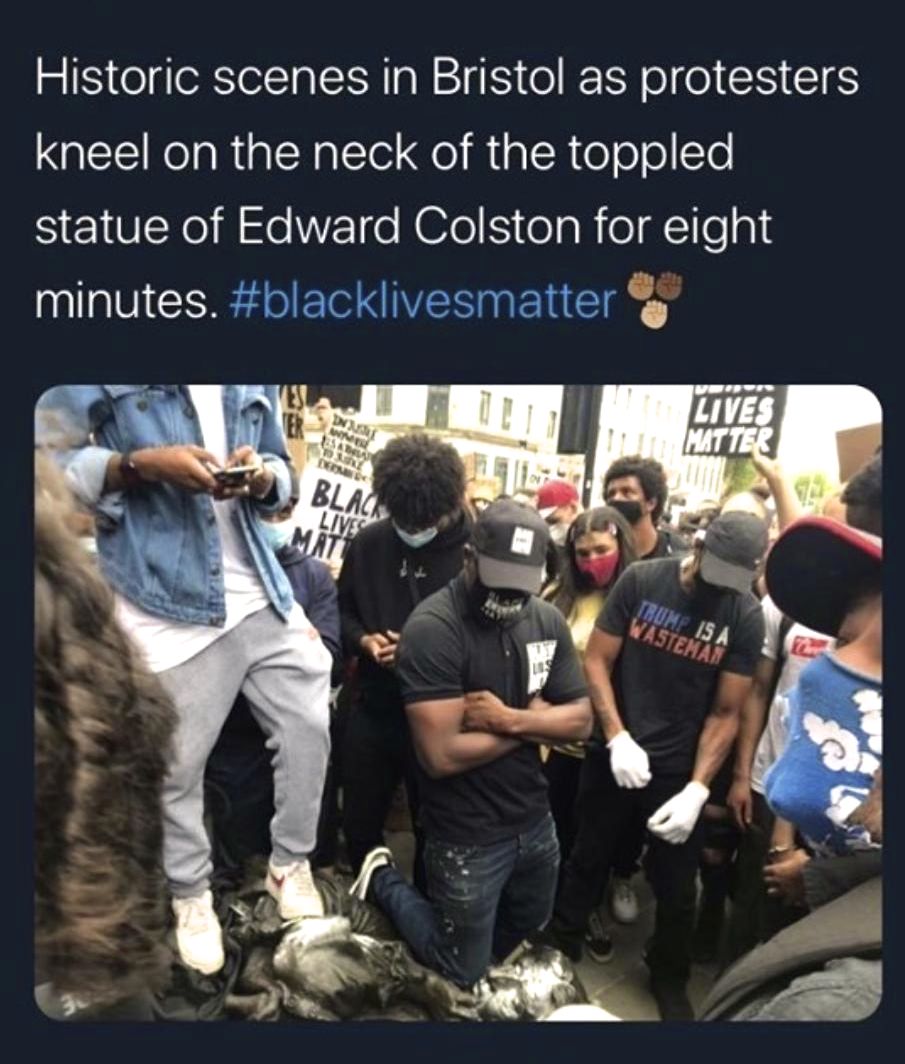 I laughed when I saw the Statue plunge in the water just a few yards from the very docks that slaver and sugar vessels sailed from. Don’t get me wrong – I do not think it should have been necessary but it became necessary when, despite the desires of ordinary Bristol residents, of petitions and complaints, the ‘good and great’ of Bristol had prevaricated and blocked the placing of a plaque that truly described Colston for who he was. Rather than explain all that in detail I refer you to an excellent article in the guardian written by Bristol resident and historian David Olusoga.    https://www.theguardian.com/commentisfree/2020/jun/08/edward-colston-statue-history-slave-trader-bristol-protest

I had previously recommended his book and that of Peter Fisher for more explanation about the history of Black people in Britain and Shashi Tharoor for a summary of the results of empire in India.

“Black and British: A Forgotten History” by David Olusoga

“Staying Power. The History of Black People in Britain” by Peter Fryer

“Inglorious Empire. What the British Did To India” by Shashi Tharoor

Anyway, my view is very clearly that statues are not there for ‘history’ but for the celebration of the person represented and by implication the actions of that person. That is an insult to the memory of those enslaved persons and it is despicable that Black residents of Bristol had to continually walk past an effigy of the very person who may have been responsible for the enslavement of their own ancestors. More people have been taught in a single day about the real history of enslavement and that particular man and his role in the evil trade than in the last century of it standing there. We cannot deny history but we can explain it, and its legacy, in a truthful and respectful manner. Statues and celebration of people like Colston, Rhodes, Lugard and their ilk belong in museums not in public places of honour. Their role in the history of colonisation and extraction should be part of the curriculum and recognised for exactly for what it was: not denied, not whitewashed but articulated truthfully and accurately.