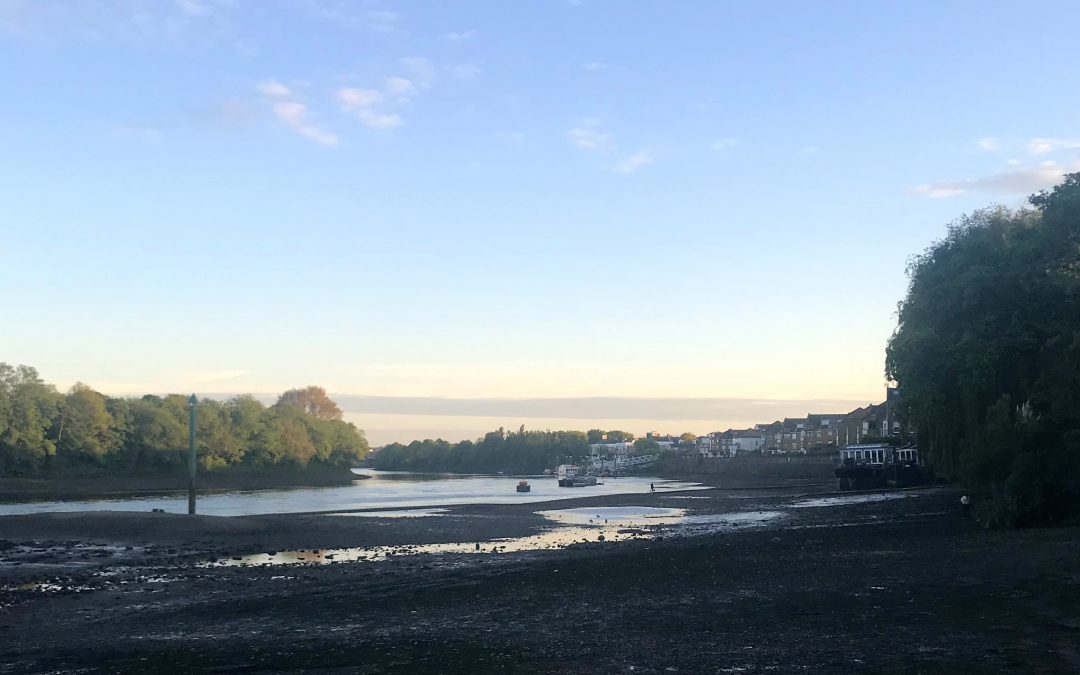 A Tale of Two Strolls

In which your Intrepid Explorer ventures into parts unknown and partakes of various victuals.

“Because the world is so full of death and horror, I try again and again to console my heart and pick the flowers that grow in the midst of hell.”

Tuesday was a balmy evening so son George and I thought a wander down through British Grove, along to Black Lion Lane and down to the river would be pleasant, as indeed it was. My first learning was that there are certainly less people about after 7 pm, which makes for a more relaxing stroll. As I explained to George, the aural environment is directly reminiscent of my ‘50’s and ‘60’s childhood, much of it in this part of the world. Less traffic, less aviation and less people out and about, encourages the birds that have less competition for their auditory space. I have not heard the blackbirds this clearly for decades.

Generally, I found those walkers and cyclists who were out were more chilled and even the lycra brigade on their brand new Fudges’ green machines more considerate, though they are still prone to bomb down the subways under the Great West Road as if it were impossible that a soft tissued pedestrian could possibly be round any corner. I welcome the Council’s attempt to keep the riverside areas safe for the less jet-propelled of the promenaders. 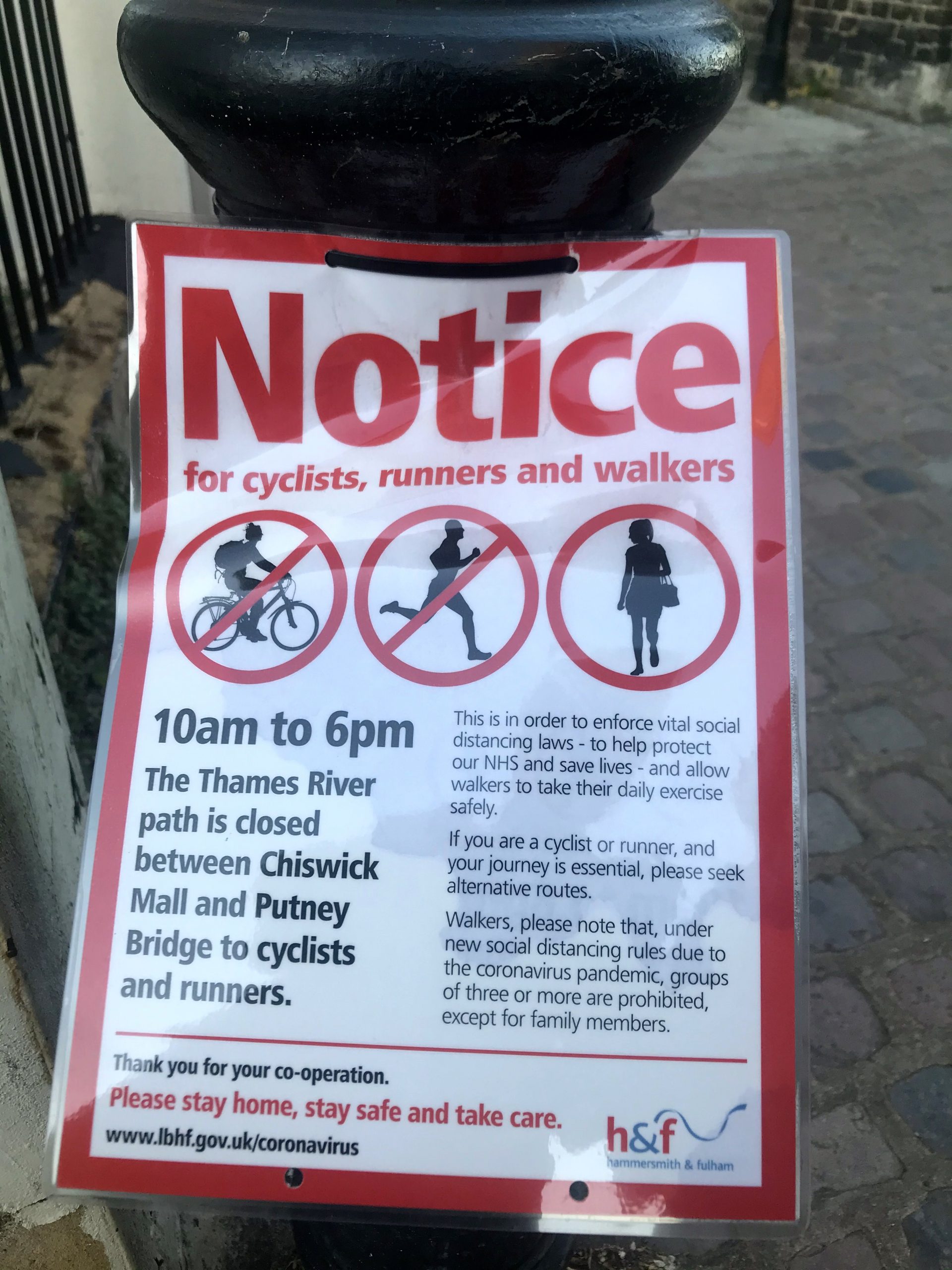 The tide was low and at that time of the evening it is a joy to walk west towards the setting sun and take in the landscape that has caught the imagination of artists over the centuries. It is hard to describe how a few minutes of gentle stroll facing that view can ease the tension on the shoulders and the furrows on the brow.

As the light faded and mindful of Chiswick Park’s closing time we cut up Powel’s Walk behind St Nicholas Church. Along the side of the cemetery, either side of the passage, there are walls that I guess must have been built late 18th century. I wonder how many children had run their fingers along those bricks on their reluctant way to Sunday Service who are now interred behind that very same wall in the soil that contains generations of worshippers from the very same pews. Modern signboards remind us that while they may have been taken by cholera or tuberculosis, the modern medicine that saves us from those perils is yet to protect us from today’s plague. 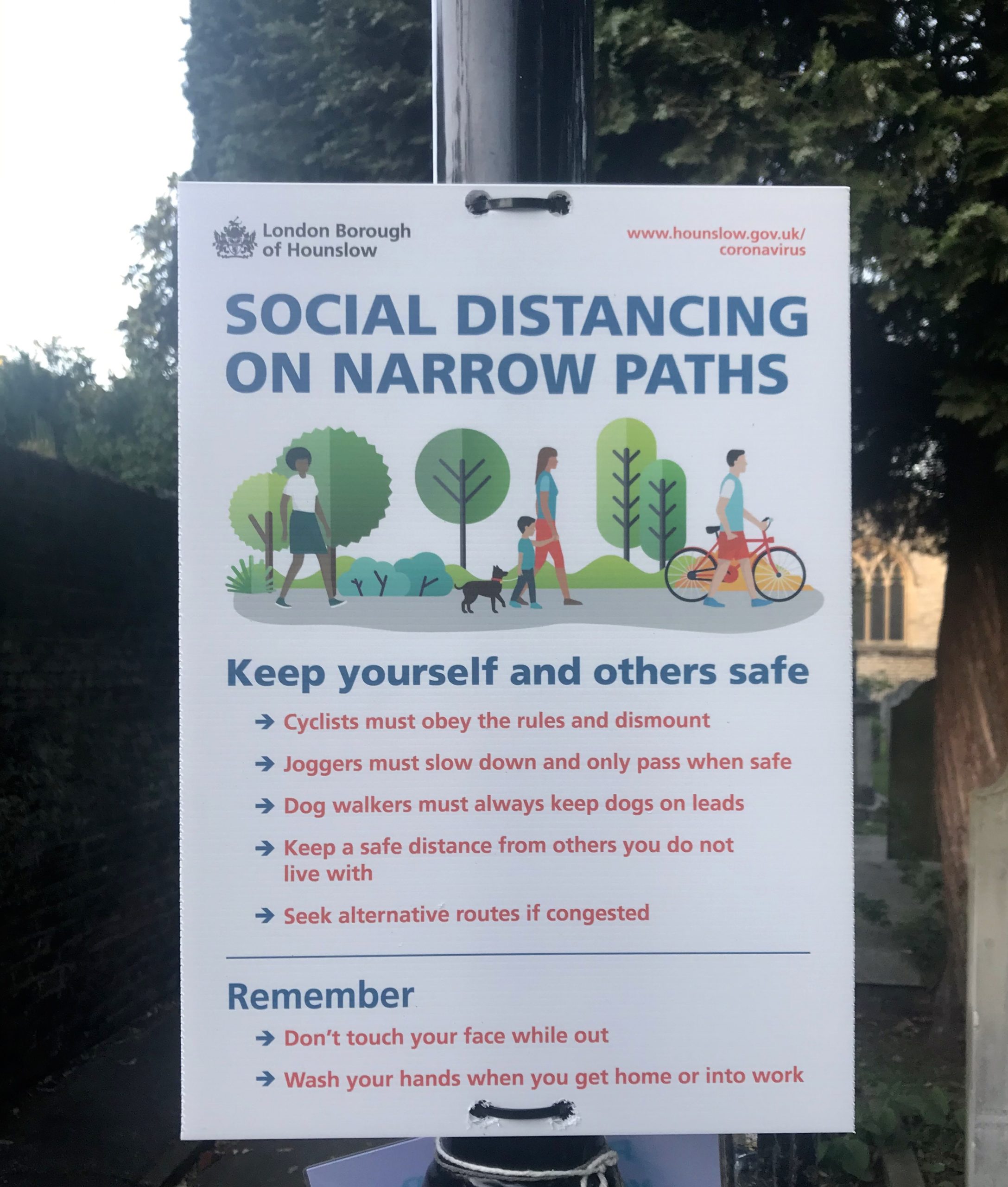 Across the main road and into the park, to linger by the greenhouses where once I am told John, Paul George and Ringo made a video though I am yet to find the plaque I am told is there and then to the High Road. Oh, for the chance for a swift pint in a pub garden! But to our delight Franca Manca is open again! We order and waited in an almost completely empty street, to collect our Pizzas and to make do with a cold beer from our own fridge. That we could dare to complain that our lockdown is tough! 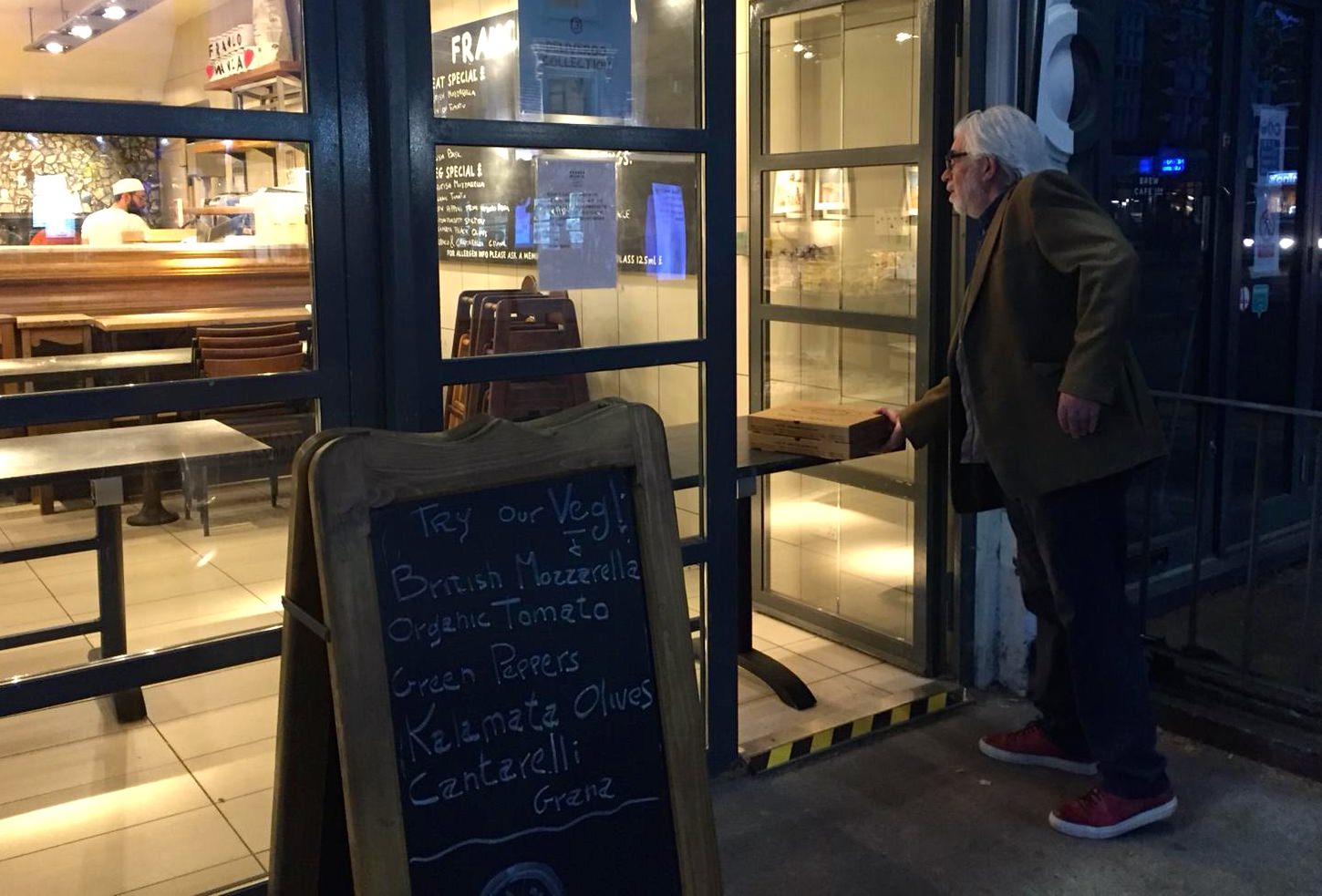 The next afternoon, the sun now higher and direct, we took a walk in the other direction. Up through The Avenue along that Bedford Park architecture to buy a freshly baked loaf from Plum Duff bakery and then to Southfields Playing Fields. I had hoped to photograph the children’s’ paintings about out NHS heroes adorning a bus shelter along that stretch but I assume they had been messed up in the wind and rain recently. There was still a note of gratitude to the staff of London Transport who continue to keep our services going. We were rewarded by a short detour into the little wild area and to take a snap of the little meadow that looks so simple but that must have taken quite some effort. We headed back down St Albans Avenue and physically distance greeted our friends that live down there (such a small but genuine pleasures now), grabbed the ingredients for that day’s evening meal and wend our way home. Grateful for the opportunity for a shopping-cum-exercise walk, it was time for tea. 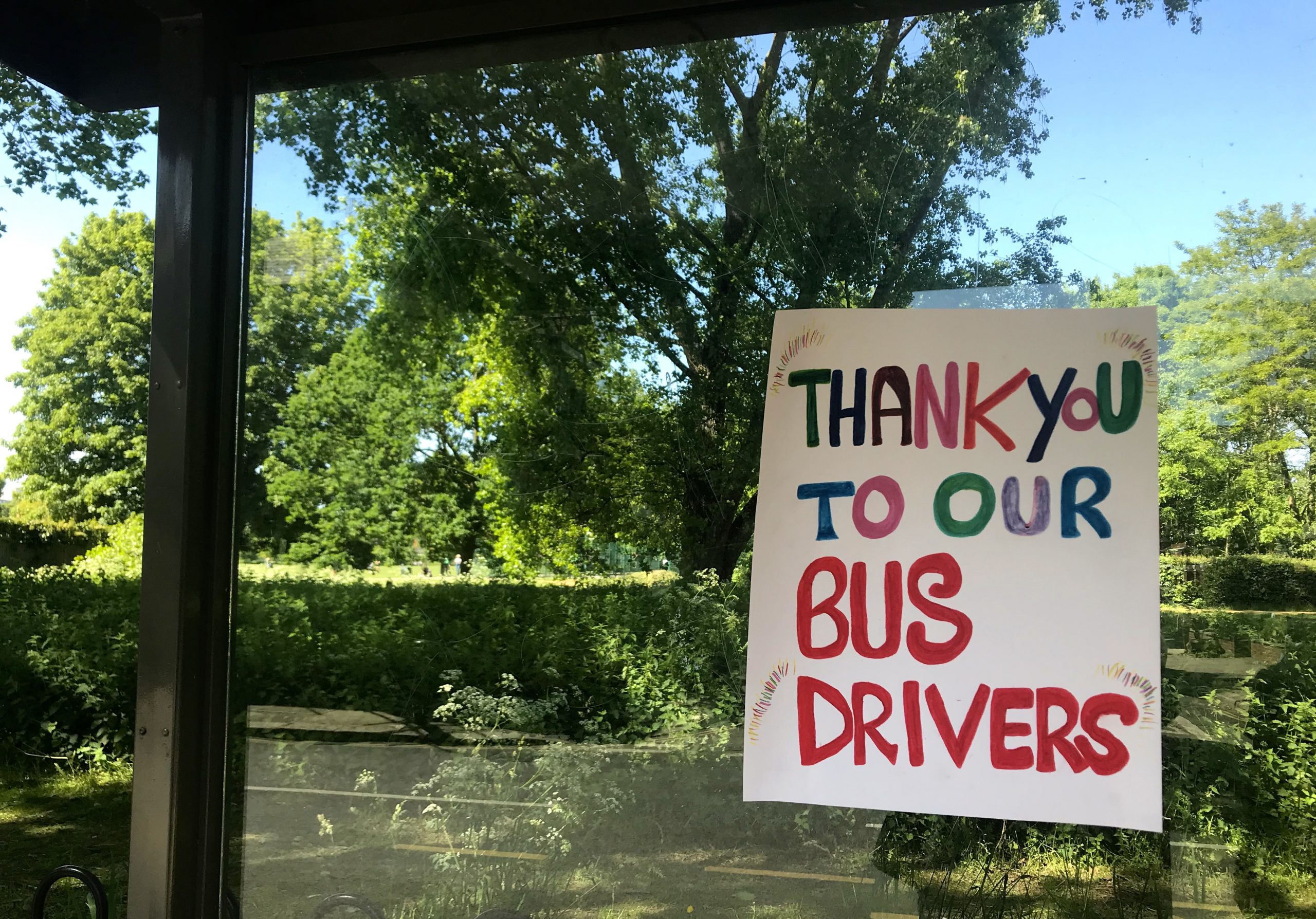 Seeking ideas for imaginative menus, ideally meat free and using ingredients bought in local (not supermarket) shops I tweaked a recipe (actually, its hardly complicated enough to be called a recipe) for baked sweet potatoes. I usually blast them in the microwave for about 7 minutes and then pop them in a hot oven for about 40 more, noting the skins often split so its best to put them on something that will catch the flesh if it does. As these were baking I chopped a couple of good size spring onions and mixed them in a tart yoghourt – sheep’s’ or goats’ milk works well as its sourness provides the perfect contrast to the sweetness of the sweet potato (with a little turmeric, chilli, salt and pepper added). I steamed some fresh spinach – note, not the anaemic tasteless stuff found in plastic supermarket bags but the real dark green bunches of leaves available in several proper greengrocers in Chiswick – and as soon as the potatoes were ready, soft enough for the insides to be mashed up a bit I spread the spinach and then covered it with the yoghourt and spring onion mix. This easy-peasy meal benefits from all the contrasts of flavours and consistency – the crunch of the onions perfectly highlighting the sweet softness of the potato. The intense orange of the sweet potatoes and the deep green of proper spinach also makes this an intensely visual meal. 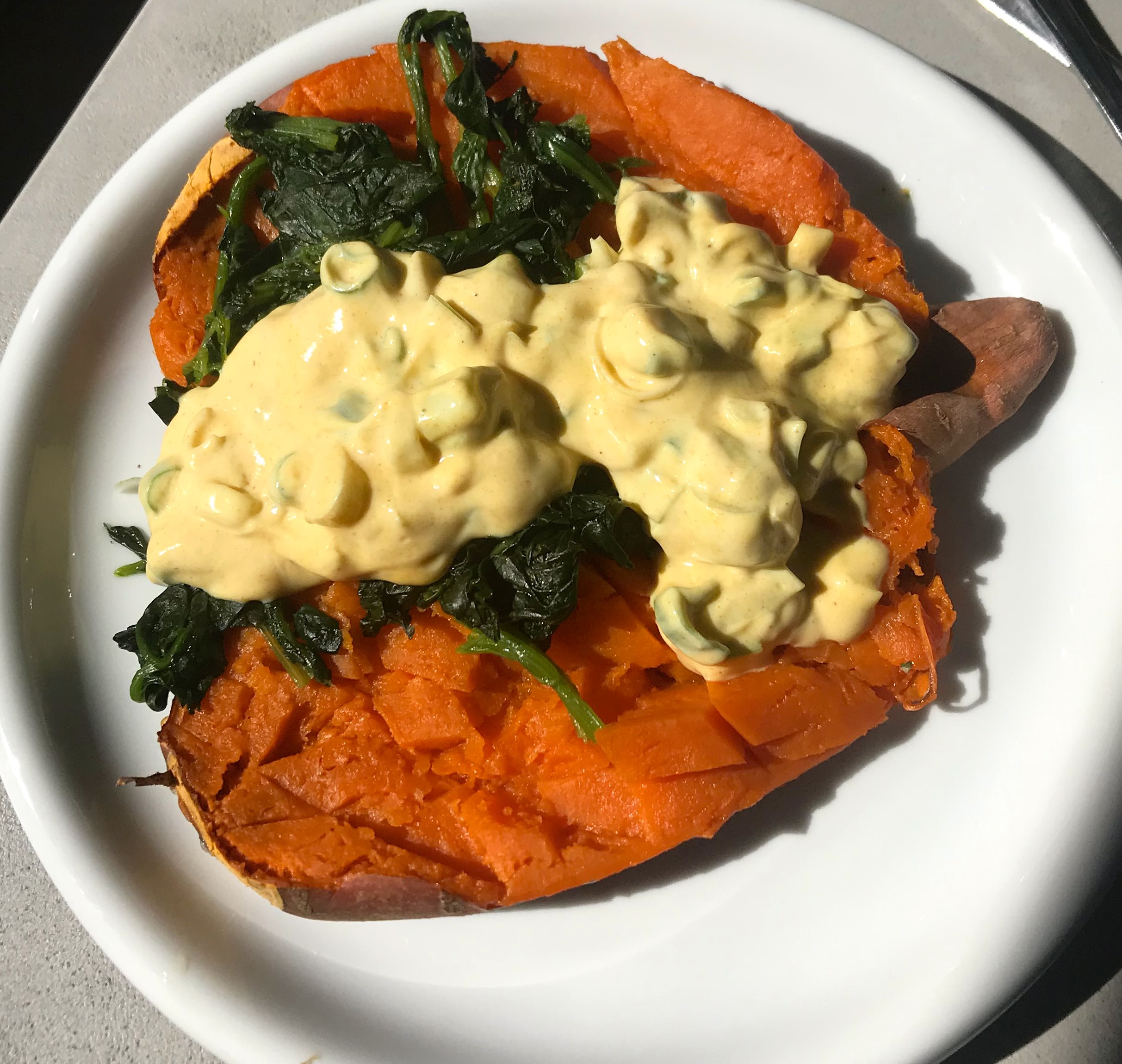 I cannot overstate how fortunate I recognise myself to be. I speak to or message with my friends in Lagos and Kano on a regular enough basis to understand that Covid-19 is not the global leveller that it was first made out to be. It stalks the poor, the vulnerable and the weak disproportionately. In the UK more and more information is coming out about the contrasting impact on areas with higher numbers of BAME Londoners, of lower income areas with the more affluent districts. I am building up to write what I hear about in my old stomping ground in Lagos but I fear to.

So, on a Thursday evening ready to stand on my balcony and bang one of my old drums for the NHS I am listening to something a little more peaceful than my usual fare. 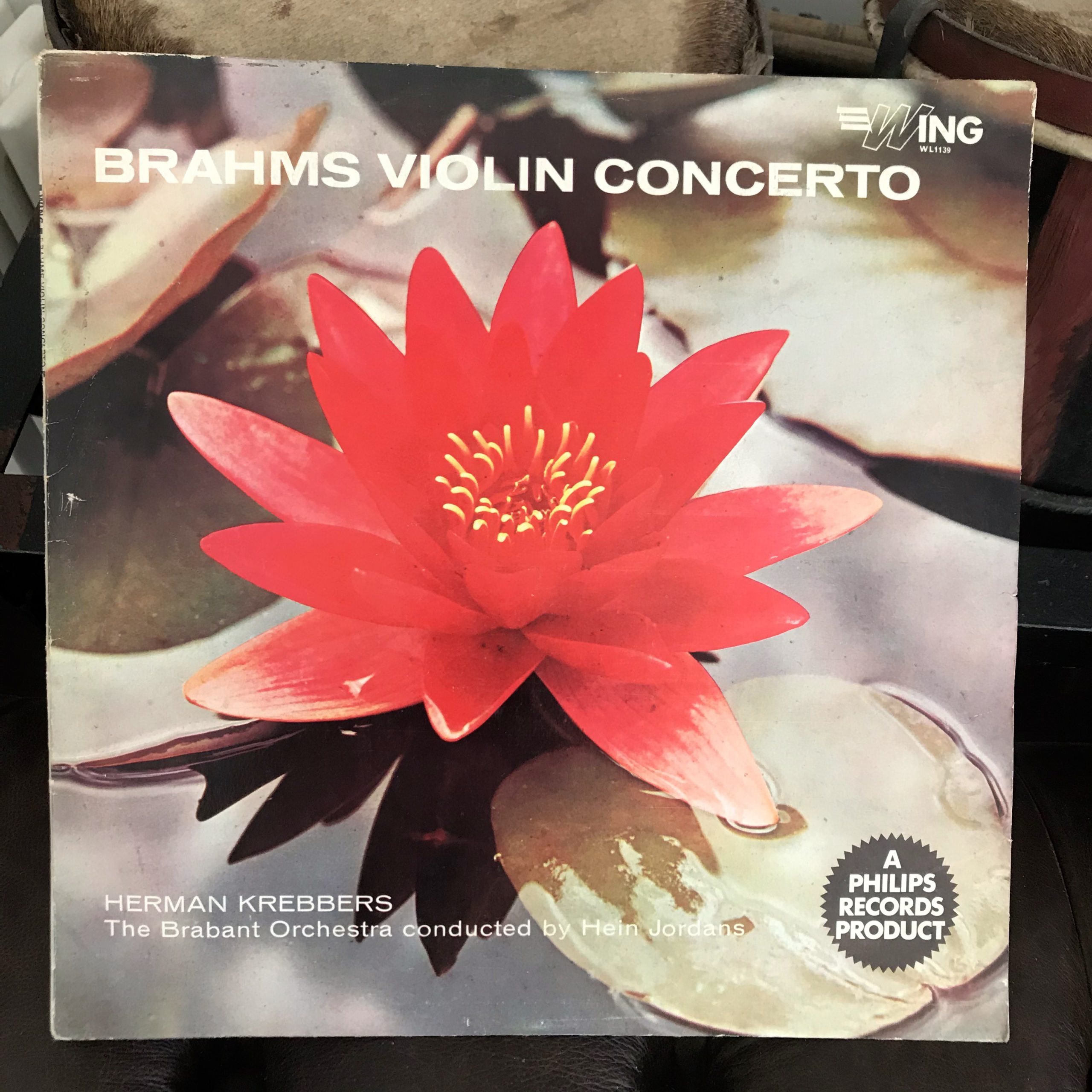 This pressing of Brahms Violin Concerto in D, Op77 was my mother’s. It was my father who championed classical music in the family, predominantly his great love, Opera. However, Mum had a small collection and I remember her playing this and Grieg and Rachmaninoff. My more personal engagement with it was much later when freshly married we played it in the car when driving around the English Lake District, in my memory usually in the rain. There are many better recordings but I have kept this Vinyl as one of my earliest introductions to how peaceful classical music can be. I leave you with Itzhak Perlman and the London Philharmonic. I might actually go and sit in the Southfields meadow or gaze west down the river with this in my earphones right after I have gone an paid a cacophonous homage to the NHS from my balcony.