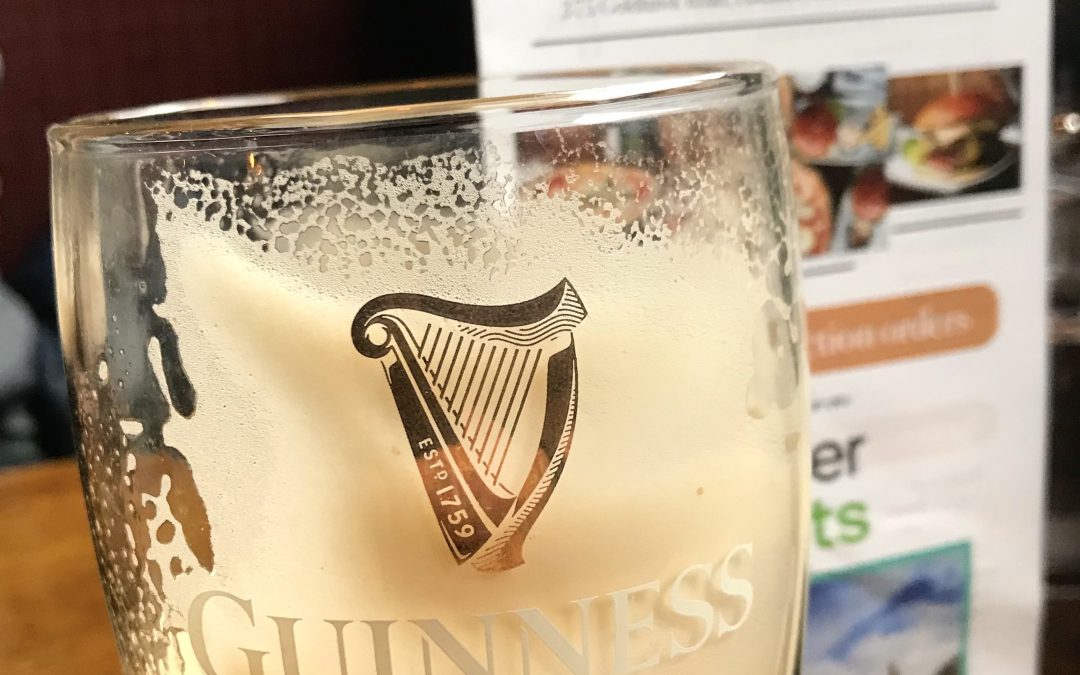 So, yesterday after starting this blog I went down the pub. “How dare you do that?” “That’s irresponsible!” I hear you say.

Well, those that know me at all will also know that my local is the excellent Raven run by landlord Dave Finan and his team. When all this is over do drop in – it’s just opposite Stamford Brook tube. I knew that they were struggling when he told that me on his usual heaving St Patrick’s Day (March 17th) they had about 30% of their normal Paddy’s Day volume – and that’s a lot of pints of the Black Stuff left un-drunk. On Friday 20th the sun came out so George and I took ourselves for a riverside walk along Chiswick Mall. On our way back we just thought if the Raven was not too busy we could pop in for a sensible socially distanced pint. At the very moment we walked in the few locals that were there were glued to the TV screen and Dave did a ‘ssshhhhhh’ from behind the bar with a finger to his lips. It was the actual BoJo announcement that Pubs and Restaurants were to shut from that evening. We felt for a glum looking Dave with a cellar full of un-drunk pints and a kitchen full of food ready for the weekend, so were morally forced to stay – duly distanced from the other regulars who we conversed with from afar – and consume several of those pints and eat what food we could. All of which explains the photo of my last pint for a while as the caption photo of this blog.Which brings me to the point – why I went down the pub yesterday. The answer was to collect some eggs! Dave had messaged several of his locals to say he had so many eggs that would go to waste so we were welcome to pop down and pick up a few. So I did – and I should point out that he came out and gave them to me outside the pub and I was not allowed to sneak in for a quick one. I look forward to an omelette over the next couple of days.

Meanwhile, having deciphered the rubbish Post Office signage I took myself down this morning to catch it before it shut at 12 (or was that 12.30- who knows?). Well, today they did have a proper sign outside (was that because I tweeted a copy of the photo to the @PostOffice twitter feed?) but they also had a queue stretching 50 metres down Barley Mow Passage. Given everyone was clearly 2 metres apart it was probably only 20 people but there was a member of staff telling them that they were closing on time and would not be serving even those people already at the back of the queue. Raise a glass to customer service! I had better go down before breakfast tomorrow.

Overall, the High Road was significantly busier than yesterday with queues outside Boots and the banks – all orderly and socially distanced. M & S had a very well organised waiting system supervised by a member of staff and my local Sainsbury’s (by the junction with Chiswick Lane) had a less well managed and more informal system. As I wanted some milk * I joined the queue. There are always some tossers though, aren’t there? One guy turned up and went to walk in. On being stopped as the queue was pointed out to him he swore at us and marched off. I exchanged glances, bonding with my fellow pavement dwellers. In fact, I did notice generally there was more eye contact between strangers in queues and on the streets than we would normally see in ‘reserved’ Chiswick. Long may that continue.

Talking of supermarkets. Why is everyone rushing to the supermarket and then complaining their shelves are empty when nearly all the small, local shops in Chiswick have plenty of stock? Apart from eggs, which I am told are in short supply everywhere (not for me though, thanks to Raven Dave) I saw just about everything you need in the small businesses that we should be supporting along the High Rd. I leave you with a few pictures and a strong recommendation of where to go for your provisions if you are local. Even the little Italian Restaurant on Elliot Road, Tarantella, is making the best of it and I will certainly try their bread at some point. 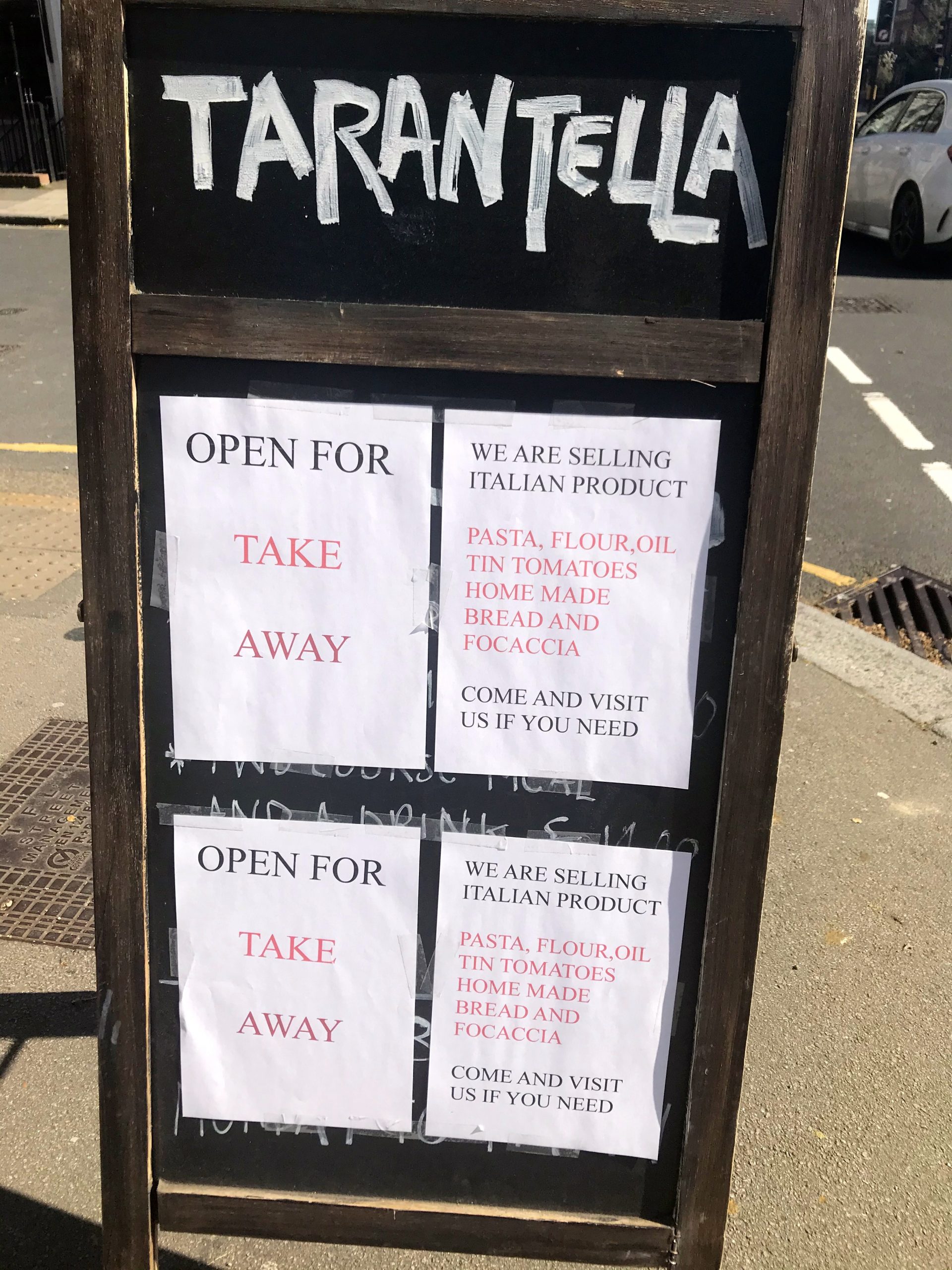 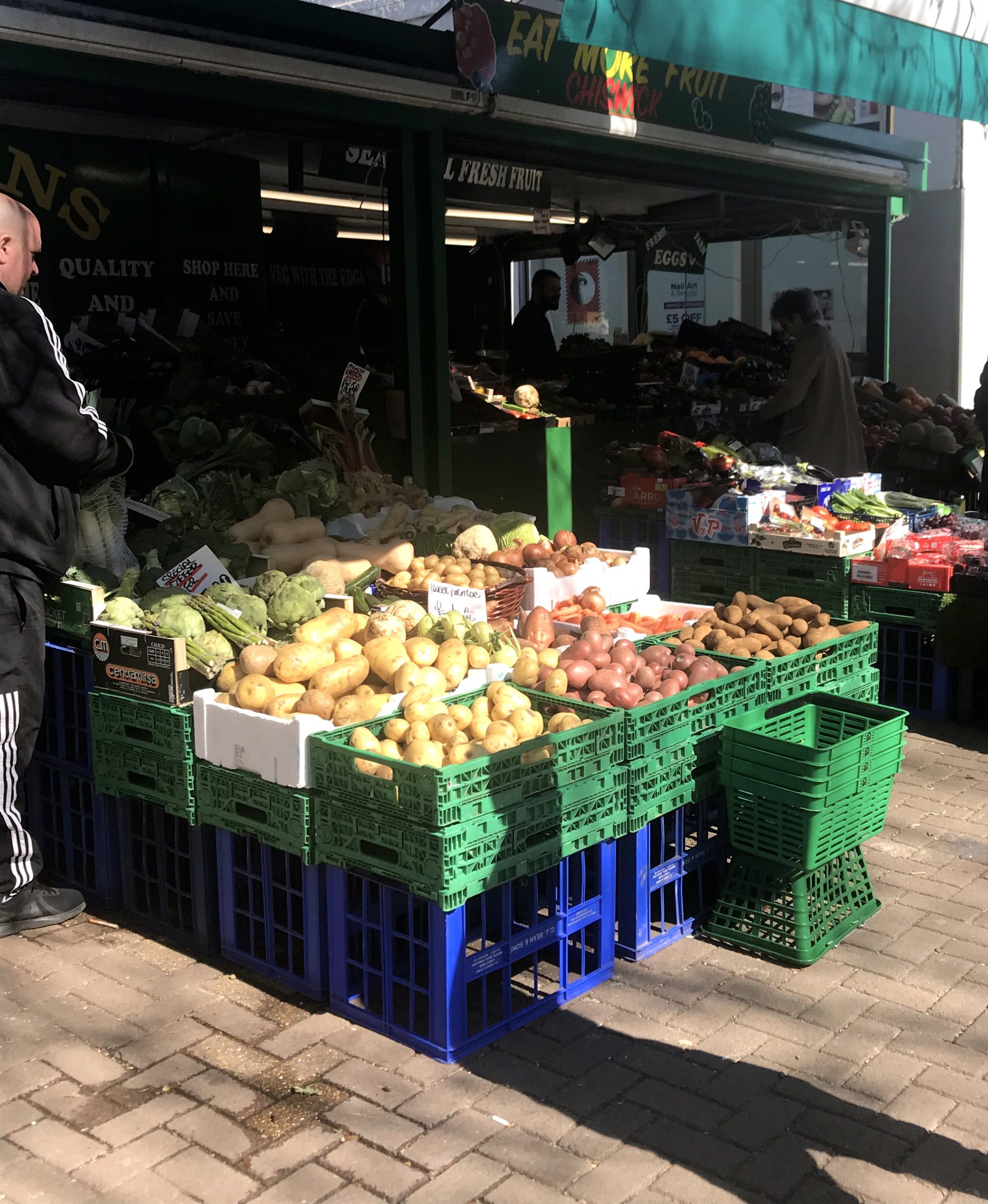 Fresh fruit & vegetables on the High Road street stalls. This one down near Fisher’s Lane 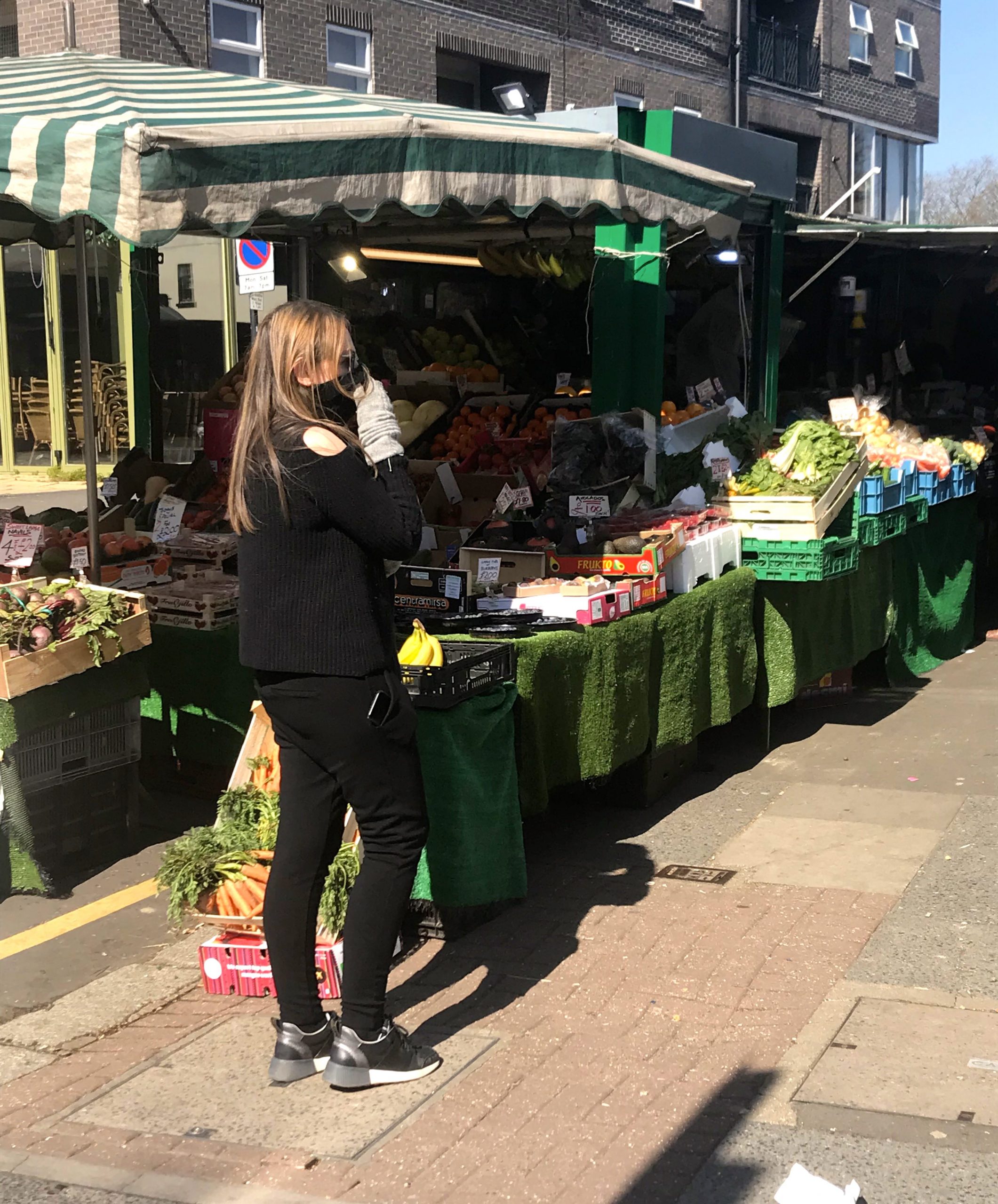 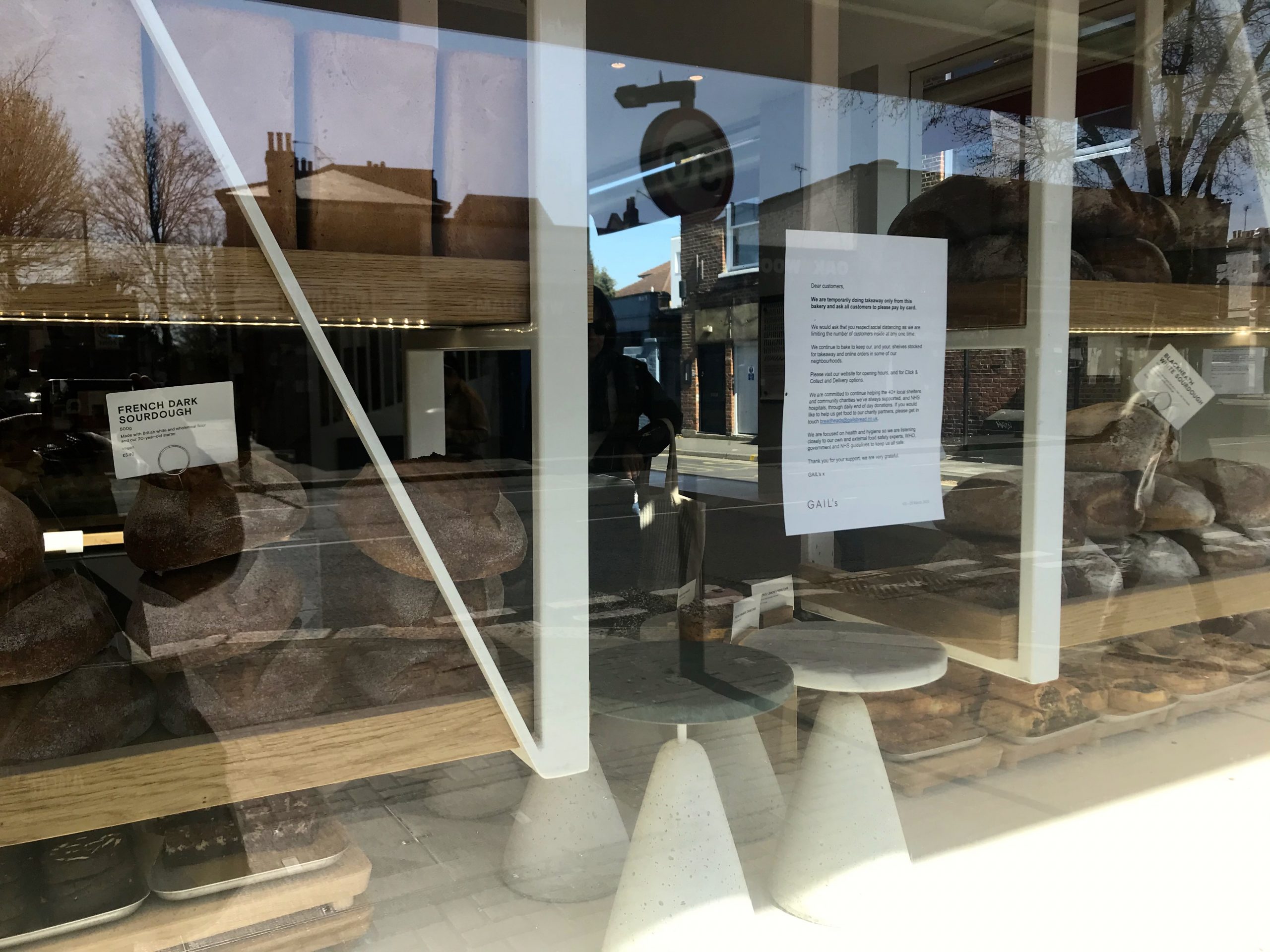 Gail’s Bakery had plenty of bread at Noon today when I walked past – plus a few savouries and confectionaries.

So, this is just my second of this series of blogs. If you are new to my website you may still have noticed much of my writing reflects the many years I spent in Africa, particularly Nigeria. I still have many friends in Lagos and elsewhere, many that still treat me as a member of their extended family, and I am very worried about them as more and more news is coming in of the spread of the virus throughout that continent. Some of my future posts will cover what is happening out there and how that impacts their families here in the diaspora. My sister is currently in Spain where they are in the midst of what is becoming the worst outbreak any where in the world. I am worried about her and her friends as they are now in their second week of isolation. We suburban London dwellers – and lets face it, if you are reading this missive from a privileged member of the middle class you are also pretty much going to be middle class. Remember, for many, if not most of us there are going to be many, many in worse circumstances than us.

Meanwhile, how am I doing isolated from my family ? Well, I will share with you how I am determined to eat healthily – I am mighty proud of my home made soups so you may just get some of my own recipes. I am doing my best not to descend into too regular use of my pretty substantial booze stock (I do have a little bar in my apartment) nor do I want to use up my marijuana chocolate too quickly. On the other hand, as my Nigerian friends would say “Bodi no be wud o” ** and this is just the kind of circumstance that a good glass of wine, a strong bottle of Nigerian Guinness or a puff on my little pipe was designed for. Watch this space!

* In cereal and my porridge I am now an avid user of Oat Milk but in my morning ‘cuppa’ it has to be the traditional cow’s stuff!

** Pidgin. Literally – ‘your body is not made of wood’ an expression that means we are humans and not devoid of emotion, of one kind or another.