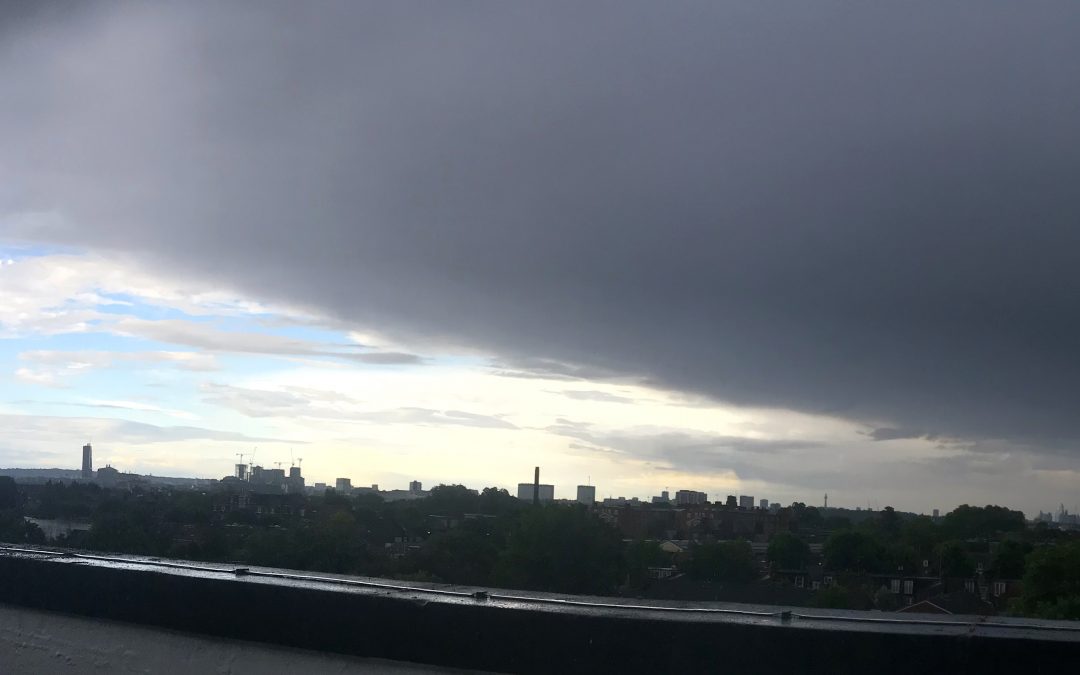 is the most ferocious enemy justice can have.”

It is an awful cliché but watching all the Black Lives Matter protests in the US and here in the UK makes me want to listen to The Blues. It goes without saying that while Hip Hop and Rap provide the musical vehicle for protest by urban youth, particularly African Americans, today – not forgetting Grime here in the UK – it was The Blues that was the voice of the politically and economically disenfranchised Black population from the 1920’s onwards. Prior to the Black activism through the Civil Rights movement, Black is Beautiful and Black Lives Matter music told a very different story than today. On that subject I strongly recommend Maya Angelou’s autobiography that made me laugh out loud and cry real tears almost at the same time while it was educating me. Simply, Maya Angelou was one of the great human beings every to walk this planet. “I Know Why The Caged Bird Sings” is the first book in a seven part series and took its name from the third stanza of a powerful poem by the African American poet Paul Laurence Dunbar (1872 to 1906).

If that isn’t The Blues, I don’t know what is.

One of the earliest influences on my musical taste was Mike Raven’s R&B Show on Radio 1. * In fact Sunday afternoons were a treat as Mike’s show ran for two hours and then it was immediately followed by the John Peel show. John Peel went on to become a ‘National Treasure’; the David Attenborough of rock music, but it was Mike Raven that played proper Soul and Blues. Around 5 o clock, carrying my little transistor radio (the word ‘tranny’ had a whole different meaning then) I would walk into Hounslow and catch the 272 bus to Southall and stand in the queue at the Farx Club. By getting there around 6 I would be able to sit on the floor at the front as soon as the doors were open at 7. The Farx Club’s acts were mostly the blues influenced rock musicians of the late ‘60’s but one of the highlights for me was when one of the all time Blues artists came to play.

I remember standing in the queue one day in 1969 when the ubiquitous white transit van pulled in with a grey haired head resting on a huge black hand leaning out of the window. It was my first glimpse of Howling Wolf. I am sure I don’t have to introduce ‘Wolf’ to anyone but suffice its to say that his songs “Smokestack Lightnin’”, “Killing Floor” and “Spoonful” are standards that have been covered by everyone in the Who’s Who of Blues. He was a huge, intimidating man who vied with Muddy waters as the top attraction at the famous Chess Records. ‘Wolf’s’ backing band on that tour was The John Dummer Blues Band who I saw several times on the circuit and that included a young Dave Kelly in the line up. Kelly has reminisced about that tour and how they often encountered difficulties as a group of ‘long haired hippies’ and a black man travelling around the UK, including having their tyres let down. I remember an imposing presence and a voice that came out at you like a growl. At one point, a couple sitting on the floor near me were obviously kissing because Wolf broke off from his set and told them off for misbehaving! I could not find any live footage of him touring the UK though in 1970 he did record an album with Clapton and a band that included Wyman and Watts from The Stones. Here is a clip with his regular band at Chess records that includes the amazing Hubert Sumlin on guitar who my namesake states is one of the finest guitarists he ever saw.    https://www.youtube.com/watch?v=ZEgGslcXXL0&list=RDHTDjD_UdJYs&index=4

Talking of ‘Dust My Broom’ – on March 8, 1969 I saw Fleetwood Mac perform that and other blues classics at the old Borough Road College, Isleworth now part of Brunel University. Amazingly, they were the support act to The Joyce Bond Revue who were a Ska act that must have been on tour from Jamaica. The line up was then Peter Green, Jeremy Spencer, John McVie and Mick Fleetwood – it may have included Danny Kirwan too. Here is a clip of them playing just that song in 1968. It makes it clear how so many of today’s well known bands and musicians started their careers playing straight off blues. Here they are playing it as one of their regular songs in 1968.   https://www.youtube.com/watch?v=zaF93P5L9ZU

So, if you have read any of these you will know that usually my musical memory meanderings kick off with either an old Vinyl of mine or a friend’s. Although my ramble through my love of Blues did not start with a Vinyl, it will end with a couple.

I am a great lover of Delta and Chicago Blues guitar and not actually a fan of the ‘Big Band sound’ yet, strangely enough, the Blues singer most frequently found on my Spotify playlists was from neither of those areas, did not to my knowledge play guitar and is famous for singing with big bands. Mr “Five by Five” (as he was as round as he was tall) Jimmy Rushing was a originally a musically trained piano player from Oklahoma. In 1924 he was invited to leave his piano and sing a song and he never looked back. He was most famous as a Jazz singer, especially for a 13 years spell he did as the lead singer with The Count Basie orchestra, which gives me a chance to post one of neighbour Lloyd’s Mother’s Vinyls. 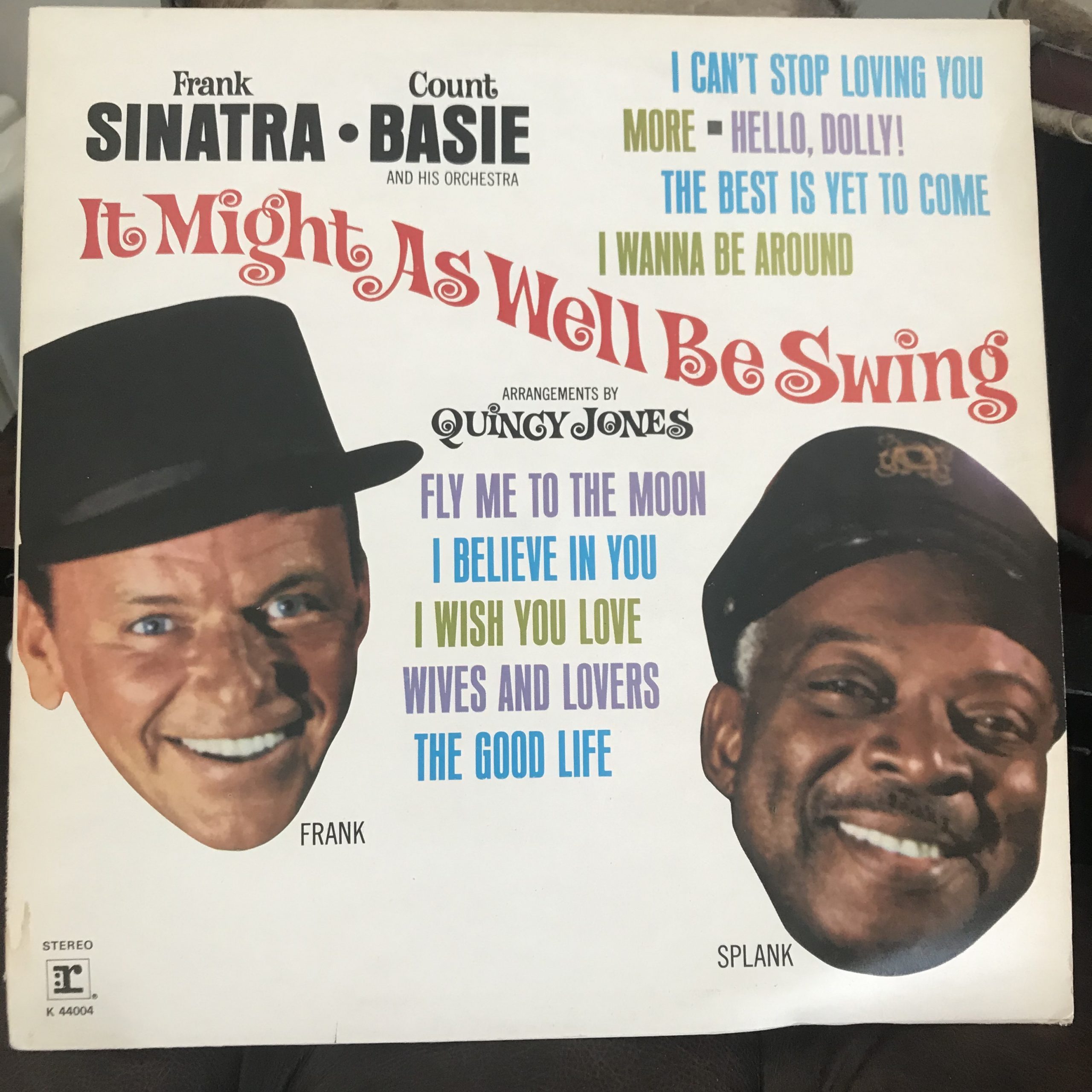 For me his greatness lies not in his Jazz recordings, though he was obviously punching with the best, (he recorded at least one album with Dave Brubeck) but in his Blues voice from the intensity (he was what was known at the time as a Blues ‘shouter’) that apparently enabled him to sing above the sound of the horns without a microphone to a smooth mellifluousity. From that day in 1924 to his death in 1972 he was never out of work and for me it was his Blues recordings in the latter stages of his life that are most interesting. I came across this 1967 album “Every Day I Have The Blues” sometime in the mid ‘70’s in Brighton in a plain cardboard cover. I imagine it had been sitting in the second hand record shop since 1969 (see the sticky label) and I must have bought it for a few pennies without knowing more than a single track. It combines a slickness, probably from Jazz arranger and conductor Oliver Nelson, with a heartfelt Blues quality. It is available on Spotify and I really do recommend a listen to the whole thing. 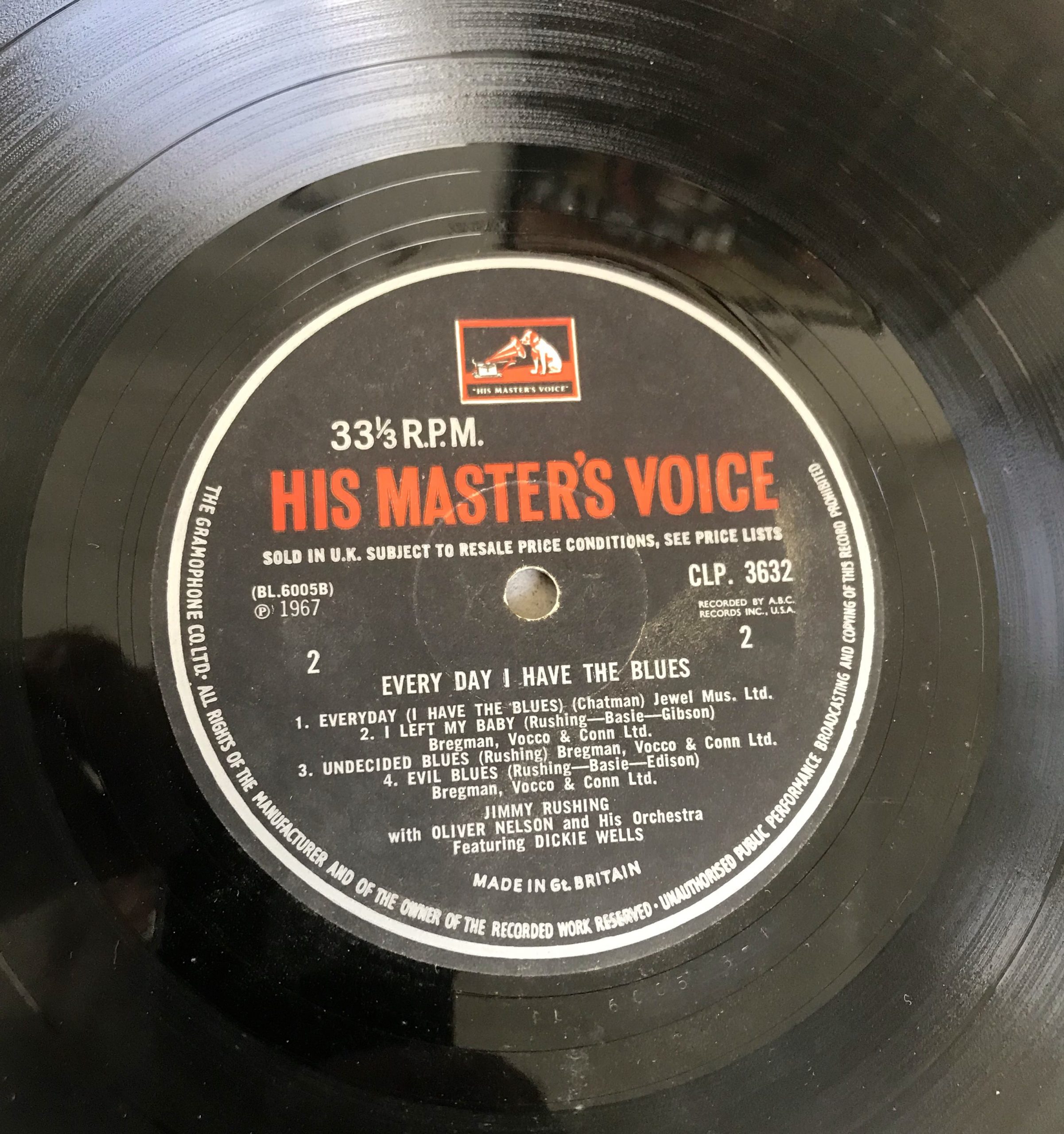 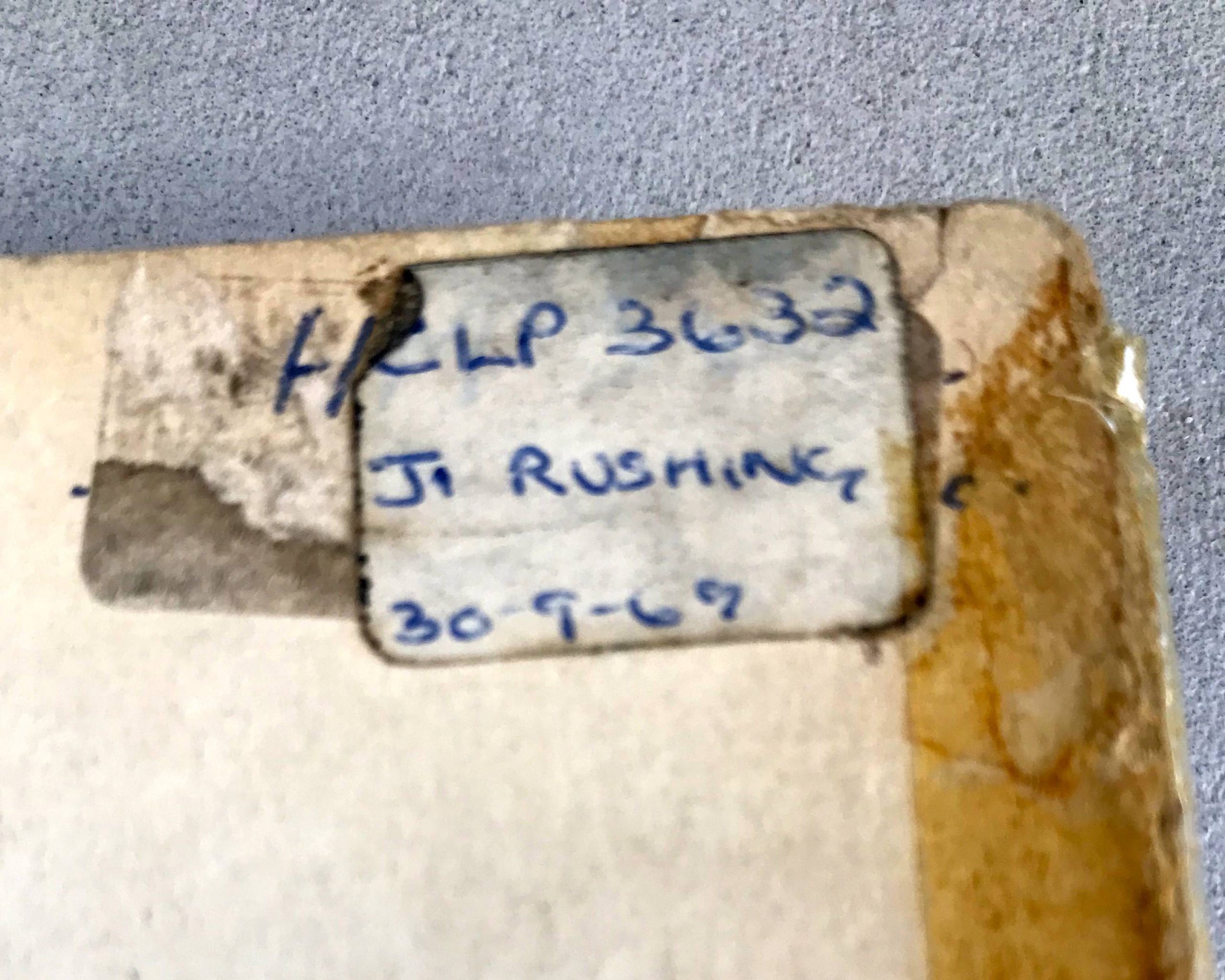 One of my real favourites is a simple song; with the most uncomplicated lyrics ‘Keep The Faith Baby’ has the most delicious Trombone playing by the albums featured player Dickie Wells.

The most well known song is the title song ‘Everyday I Have the Blues’ credited to Peter Chatman aka Memphis Slim and covered by everyone over the years. I also like “I Left My Baby” co written by Rushing with Basie and trumpeter Andy Gibson and this version is an earlier one from 1957 with The Count Basie All Stars.  https://www.youtube.com/watch?v=k8Pzs9U_Z7Q

As I can’t find a Live version of “Everyday I have the Blues” I will leave you with a classic double header of Mean Mistreater/Going to Chicago performed by Muddy Waters and Jimmy Rushing with a few other artists at the Newport Jazz festival of 1960.      https://www.youtube.com/watch?v=KAOLICFKTtA

* I loved John Peel but for me Mike Raven was the best ever radio DJ because he did not talk over records and was about the only DJ to play Soul and Blues in the UK. His real name was actually Austin Churton Fairman and Wikipedia actually list him as a radio disc jockey, actor, sculptor, sheep farmer, writer, TV presenter and producer, ballet dancer, flamenco guitarist and photographer, which is pretty impressive. Weirdly it calls his programme The Blues Show but it was definitely “R&B”. In those days we all listened to the pirate radio Stations like ‘Radio Caroline’ and in 1967 their popularity forced the staid BBC to set up Radio 1 populated by pirate radio DJ’s. Mike left Radio Luxembourg for the new station’s launch in September 1967 and his show ran until November 1971 when he left to embark on some of his other exploits.