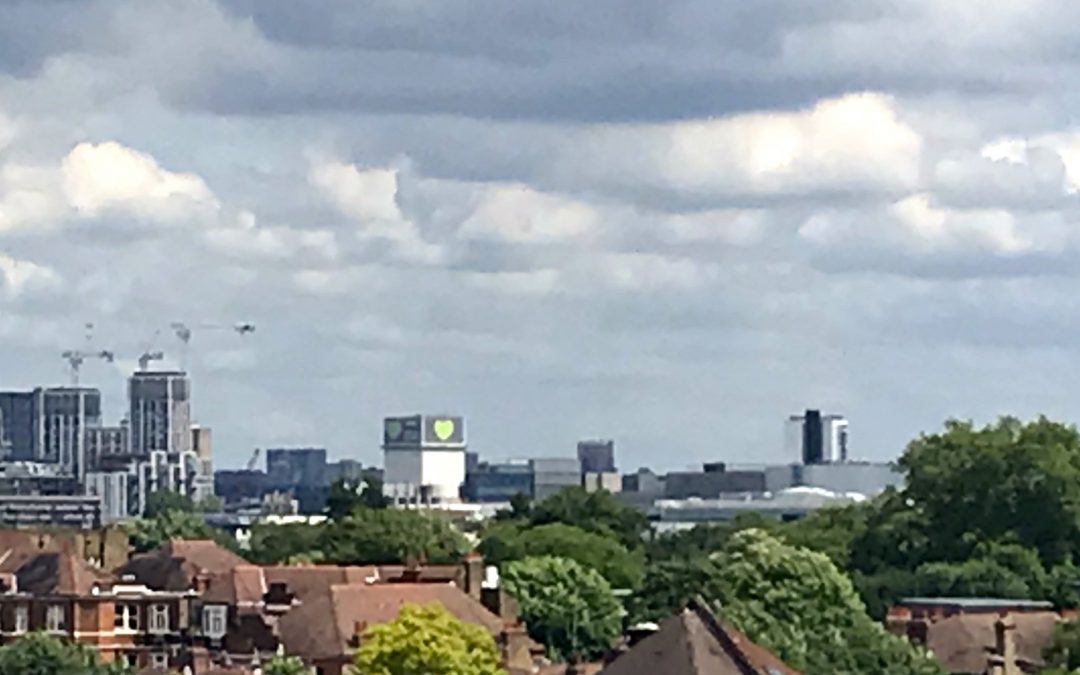 Those who were living are now dead

Those who were breathing are from the living earth fled.

If you want to see how the poor die, come see Grenfell Tower

See the tower, and let a world-changing deed flower.

It’s a warm British early summer Saturday afternoon. Where would I normally be if there we were not in the middle of a Covid crisis or the most significant social upheaval since, well, probably 1968 or even the war? The pub would always be a distinct possibility though it might be a bit early in the day but a decent pint in a pub overlooking a village green in postcard idyllic rural Britain would be to die for right now. My Nigerian mates smile at me with a mixture of condescension and that kind of eye brow raised, ‘oh really’ expression when I jokingly explain to them that God is an Englishman and I know, not for the usual colonial reasons but because heaven is a pint and a ploughman’s in a pub garden where you can hear the sound of leather on willow from the village cricket square. *

This time of year is also about when a group of friends congregate for an annual long walking weekend. The core group all worked at the old British Telecomm and my old mate, ‘Chip’, would invite me along to their beer and conversation evenings if I were back from Nigeria. They also do regular walks and I joined them on the Annual ‘Omnium’ (they gave themselves a name) get together last year on the North York Moors. This year, alas, is not to be though we had already booked a hotel in the Peak district – all now, disastrously for such hotels, postponed. Alternatively, I might have been preparing for a gig somewhere, maybe with my musician friends of the High Life Collective, hanging in the garden of Nky’s West Kensington restaurant Pitanga with Ed Keazor and Muni Keazor-King. I love and celebrate the quality of my middle class entitled but very much multi-cultural London lifestyle. * However, this very weekend I would have been doing something very different, entirely. I would have been on a train down to Brighton.

This weekend I should have been the annual Service at The Chattri Memorial on Patcham Downs to honour the fallen soldiers of pre-partition India who died at the hospitals in Brighton during the First World War. For the last twenty years it has been organised by Brightonian Sikh Davinder Dhillon and his family but this year for obvious reasons it has not been able to hold the event. I wrote about its history in an early Blog in August 2019 and you can read about it here.         https://outsiderinside.co.uk/brightons-black-history-the-chattri/

Given everything that is happening today, especially the counter-demonstrations against Black Lives Matter, monuments such as The Chattri have never been more important. I wish I could have been there this year. However, Dhill has lain a Wreath and the photographs and a recording will be released on Sunday on The Chattri website. I urge you to take a look.

Interestingly, as statues are now a matter for public debate there has been research on how many statues and other commemorations currently exist for People of Colour in the UK. The BBC news website covers this on   https://www.bbc.co.uk/news/53014592

According to the BBC Historic England who manages the Blue Plaque programme say only 4% of these are dedicated to ethnic minority figures and claims one of the problems is the lack of nominations. This seems strange to me, as I have heard anecdotal stories of the establishment’s resistance to nominations of People of Colour. In fact, on The Chattri website there is the story of Dhill’s battle to have a historically important person of Indian heritage recognised. Eventually, the appeal for Sake Dean Mahomed’s plaque was funded and it was unveiled but it was not a straightforward exercise. There is a need in the UK for strong role models for Black and Ethnic Minority youths: people of note that they can respect and look up to. Clearly there is an opportunity, if we remove some of the statues to slavers and put them in museums with an account of who they were, what they did and how and why they were relegated to museum pieces, to use those plinths to commemorate a wider range of statues than we have now. I am not just talking about People of Colour but women are under represented too. Although about one in five statues in the UK is of a female, most of them are scanty nymphs draping themselves adoringly around the feet of old white men. * There are only actually 80 Statues of named women where as there are 534 male statues (oops maybe 533 now LOL) of which 422 are credited as individuals. (BBC news 24 April 2018) The word ‘patriarchy’ tends to pop into mind.

I am leaving this weekend’s blog here.  I am donning my mask for what I hope will be a socially distanced gathering in support of Black Lives Matter in nearby Turnham Green.