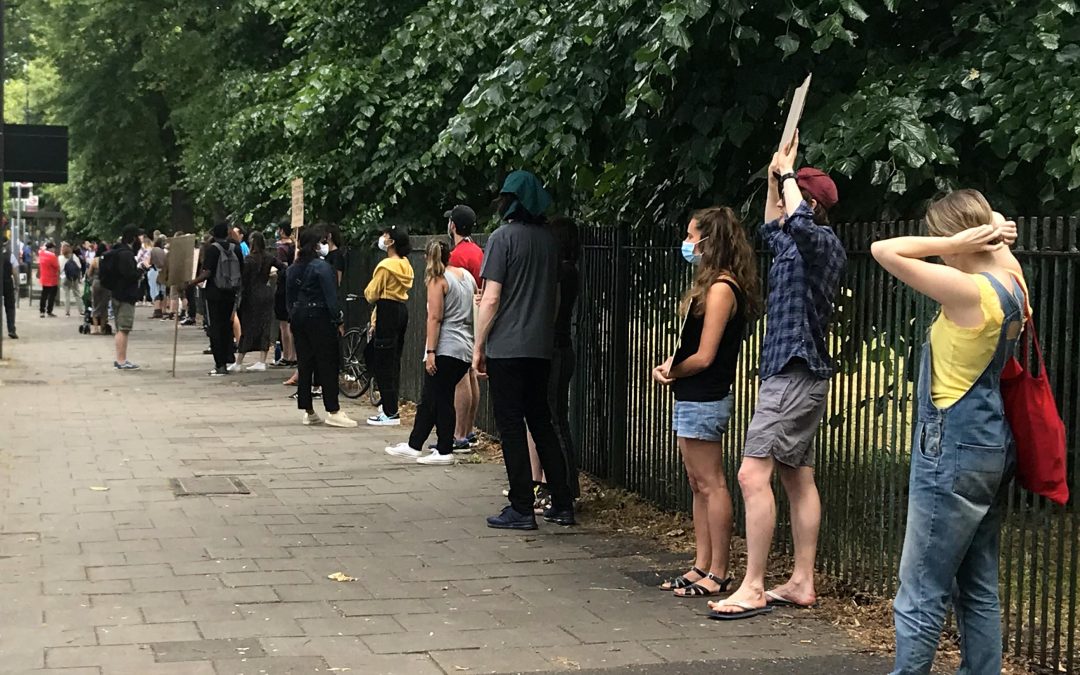 “Thee trouble is that once you see it, you can’t unsee it. And once you’ve seen it, keeping quiet, saying nothing, becomes as political an act as speaking out. There’s no innocence. Either way, you’re accountable.”

I missed the first local Black Lives Matter protests in Ealing and Kew last weekend but when this Sunday’s was announced on the Chiswick Calendar and ChiswickW4 websites I knew I had to don my mask and get along. Organiser Anil Patel had noted that local councillors had asked people not to gather but felt, correctly in my view, that local people would be pleased for the opportunity to express their solidarity. To ensure it was a local event and not to encourage outsiders, particularly those charming gentlemen from various right wing, racist groups, it was not advertised outside local newsfeeds.

I will let my pictures tell the story but though I see 100 people quoted as attending I heard a policewoman say they estimated 200 people turned up. It was relaxed with everyone giving the knee for 8 minutes and 46 seconds as well as periods of silence for victims of police violence and for the Grenfell Tower fire. Many of the cars and other vehicles passing by hooted in support. Police presence was low key though walking home I noted a few vans parked round corners so I guess they were prepared for any trouble. However, the whole thing started at 1.30 and by 3.00 protesters had mostly dispersed. All very Chiswick but if protests like this are happening all around the country it makes a lie of the Prime Minister’s odious suggestions that BLM groups are riddled with violent anarchists. The ordinary people of various ages and complexions I saw told a very clear story that many ordinary people recognise there is a problem and it must be addressed.

The crowd was stretched along the railings to Christ Church Turnham Green. Mostly in masks and observing safe distancing. 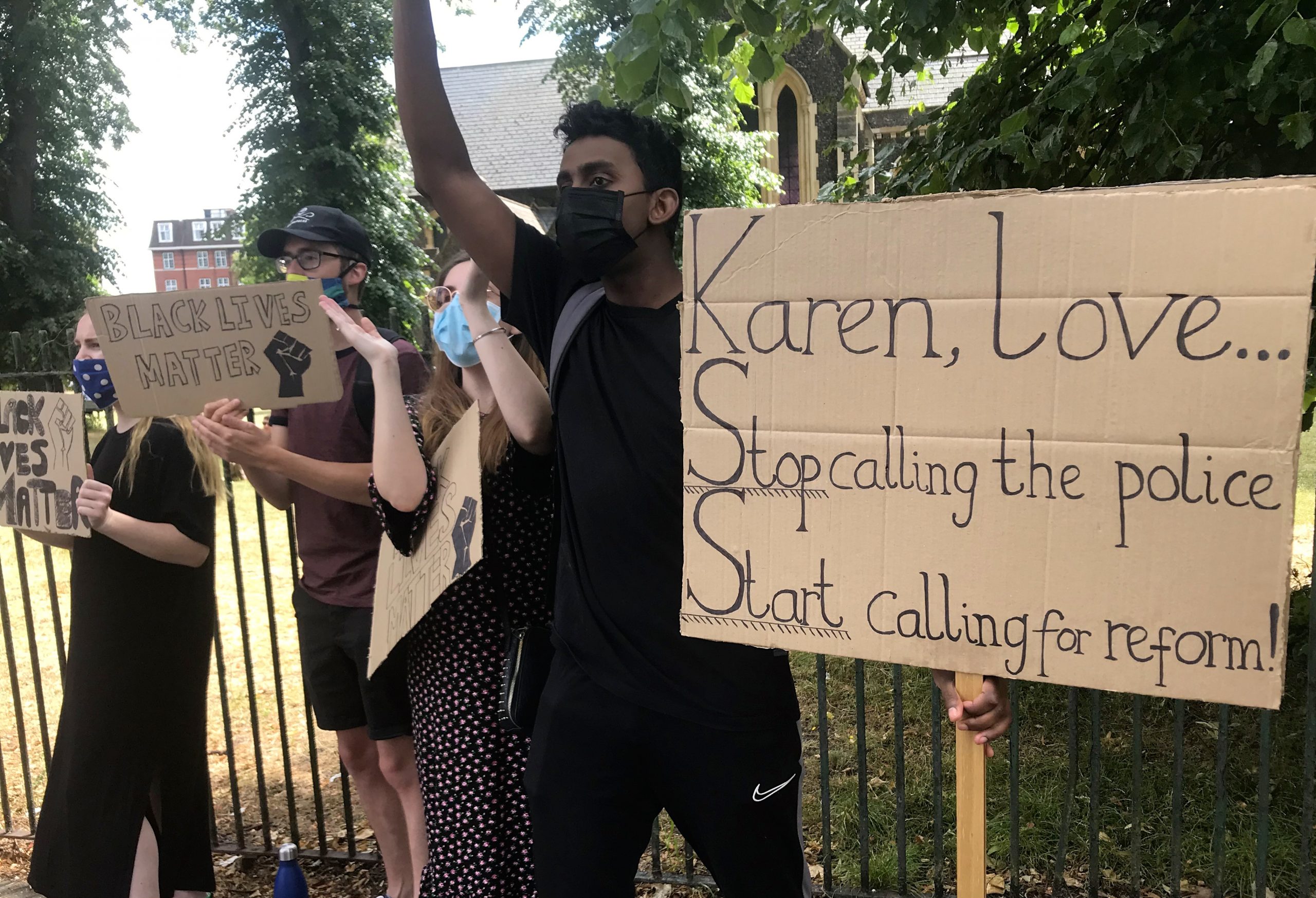 A variety of signs were in evidence. I do feel sorry for the nice Karens of the world tho’ ! 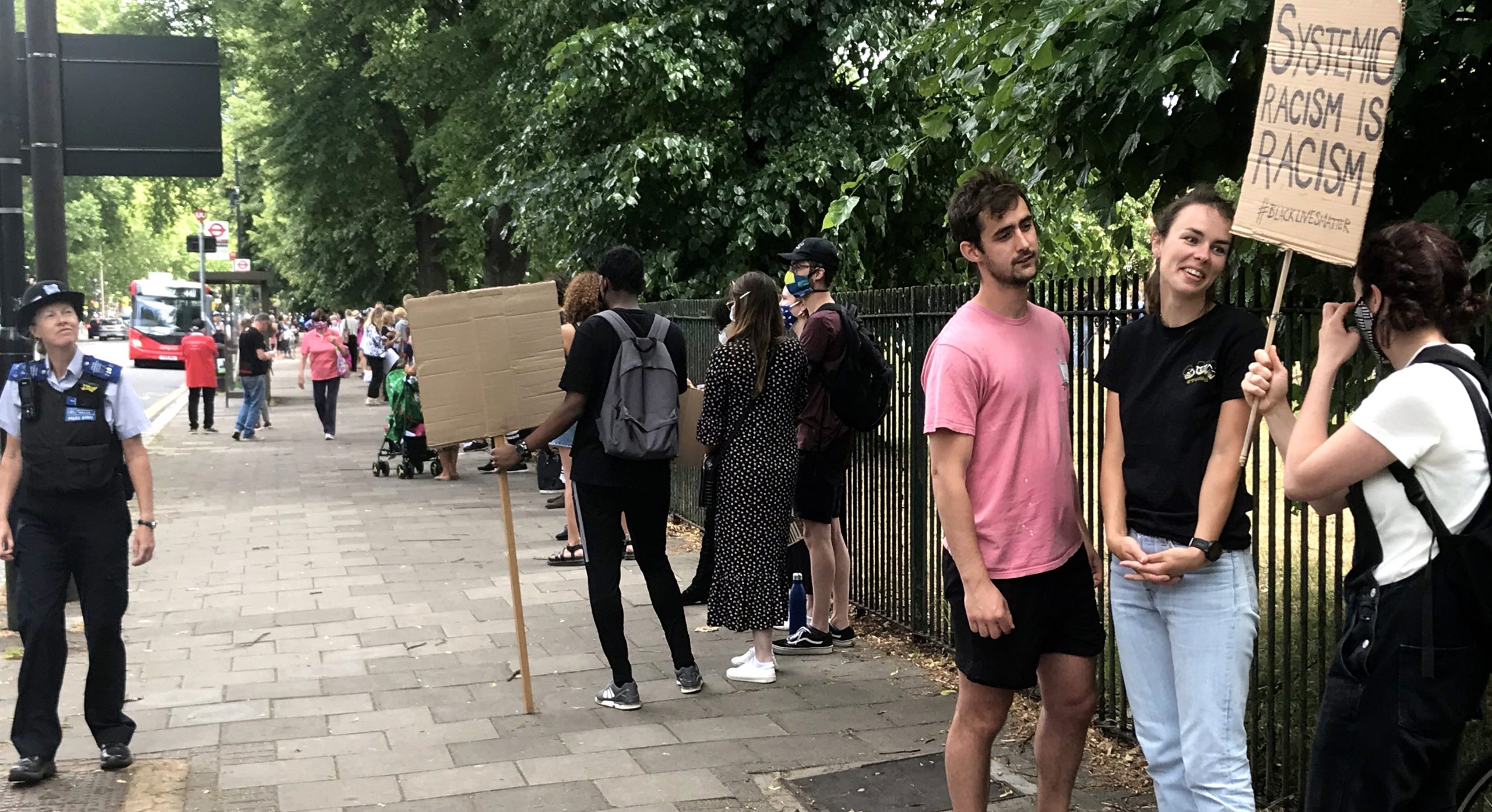 This policewoman was clearly going out of her way to be chatty and the whole atmosphere was non-confrontational. 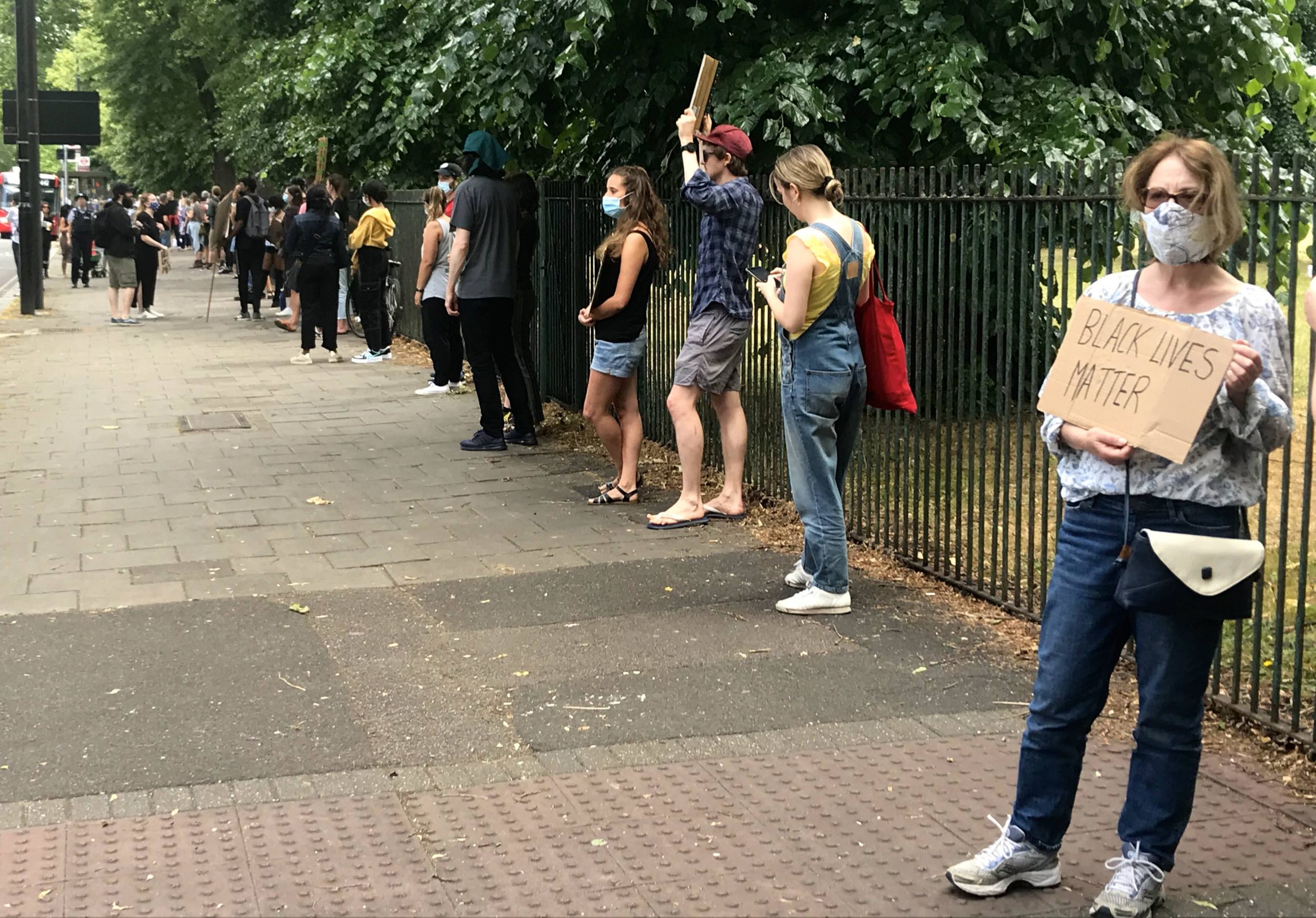 Social distancing made judging numbers tricky – there were more families attached to the protest inside the railings on The Green.

So, walking home I will share my treat of the day. Foubert’s café and gelateria is one of those local businesses I believe we should support. They are a three-generation Italian family business and all their ice cream is home made. Caramel flavour – delicious.

I had to get into some serious slurping as soon as I had taken my pic!

My last Vinyl post was the Bobby Womack vinyl. While he is not as big a name in the UK as many of those that I have talked about, the music attracted quite a few comments. Friend Anne particularly mentioned her memories of the song Harry Hippy. So here is a wonderful live version that shows off both his voice and stage presence. There are two particular things to note. Early on Womack says ‘here in London’ so I tried to work out where and when. I suspect this is from The Jazz Café in Camden when he did four sold out nights from 20th to 24th of June 2011 but I can’t be sure. The second point of note is the mesmerising voice and personality of Altrinna Grayson who toured with Bobby for many years.       https://www.youtube.com/watch?v=RgbymVThS6Q&t=50s

Of course, Womack owed the resurgence of his popularity during that period, at least partly, to his role in the Gorillaz track “Stylo” that was released in early 2010. Womack had done very little since the mid ‘90’s and had suffered from poor health including prostate cancer and diabetes. In fact, during the recording of ‘Stylo’, when he was told he could sing anything he wanted, he apparently passed out for a short period. That and a couple of other Gorillaz songs introduced him to a new younger audience and he released one last successful album in 2012 “The Bravest Man in the Universe” produced by Damon Albarn before he passed away in June 2014 at the age of seventy. I am a great fan of the diversity of Albarn’s work, especially with the recently late, great Tony Allen and I really enjoyed ‘Gorillaz’ especially the videos – so here is “Stylo” featuring the voices of Bobby Womack and Mos Def. Enjoy ! https://www.youtube.com/watch?v=nhPaWIeULKk