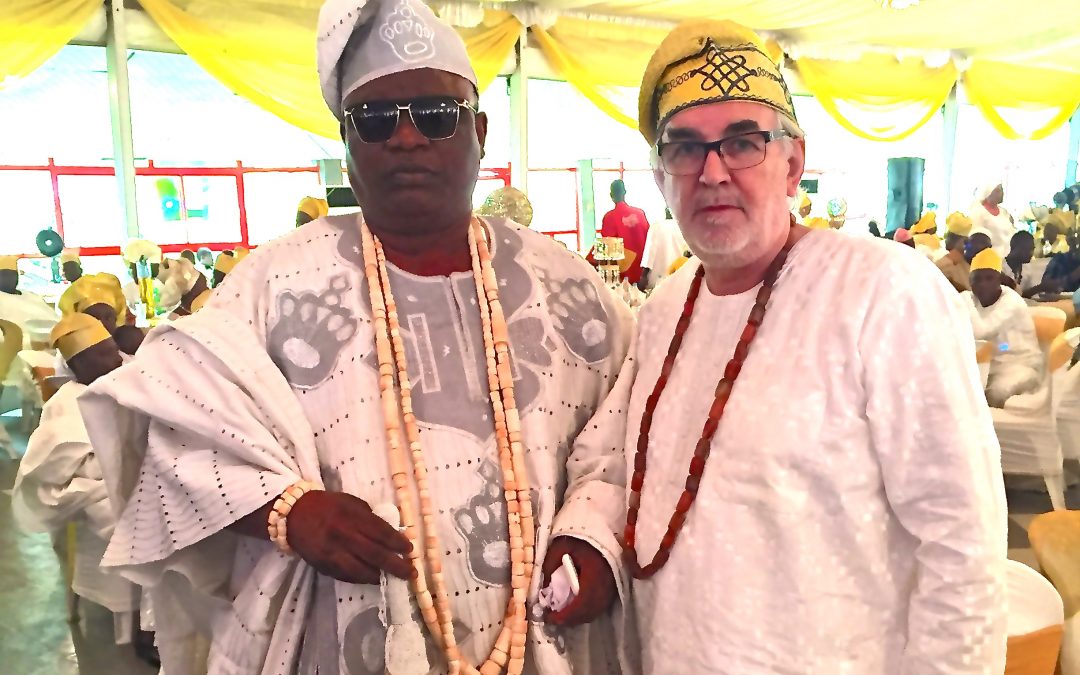 “The colonialists care nothing for Africa for her own sake. They are attracted by African riches and their actions are guided by the desire to preserve their interests in Africa against the wishes of the African people. For the colonialists all means are good if they help them to possess these riches”.

It was in 2005, when I was booted out of Guinness Nigeria/Diageo for being too ‘pro’ Nigeria that my friend Stanley Egbochuku, who was then Editor-in-Chief at BusinessDay (Nigeria’s equivalent of the Financial Times) offered me the chance to write a weekly column. It was a wonderful opportunity for which I will be forever grateful, as it was really that which enabled me to push myself towards my long held aim ‘to be a writer’. In the end ‘Outsider Inside’ had significant traction and though I returned to commercial life after a couple of years the bug had bitten me. The origins of this Blog therefore can be found back in that offer by Stanley (and publisher Frank Aigbogun) to give me the back page of BusinessDay.

The full story is contained in my book “Never Quite The Insider. A Nigerian Memoir”. In fact, now that things are opening up I am delighted to be able to go down the Post Office for anyone in the UK who wishes to buy the book. Please check out this link.    https://outsiderinside.co.uk/books/          To purchase in Nigeria, please check major bookshops or visit Publisher Bookcraft’s Website. http://bookcraftafrica.com/single/view/187       For other countries please message me.

Anyway, returning to the column – at the time quite a few friends advised me against being so public while others just said ‘keep away from politics’. I may have been writing in a predominantly business and economics publication but it was clearly impossible to avoid Nigeria’s social and therefore political context. When people started saying that a particular article was ‘brave’ or ‘controversial’ I knew I was on potentially dangerous ground but I avoided being too personal and, later on, politicians I had crossed swords with admitted to enjoying the column and called me a ‘patriot’. Jump fifteen years later and what was meant to be more of a diary of my personal Lock Down and a commentary of what I witnessed around me in Chiswick has also morphed into something more wide-ranging. I am aware that the balance has moved away from daily pictures of local life and introspective musical interludes towards essays on the socio-political events taking over our media space. However, for me the two are intimately connected. The political and administrative failure of the straw-haired-baby-orange-one’s government’s pandemic management is having a direct effect on my lock down and that of everyone around me. So too, the issues around Black Lives Matter and the debate around British post-colonial racism, are very much part of this suddenly changing world. I believe all these topics are interwoven and our reaction to them has been shaped by the kind of emotional ‘hot-house’ intensity generated by the whole Covid crisis.

I started “My Corona Blog” with my last pint at my much-missed local, The Raven. As we head, whether it makes sense or not, to a forced return to commercial ‘normality’, it is possible in the next two or three weeks that I may get to have a pint at The Raven which would seem the appropriate time to bring this edition to my Blog to a halt. However, as that clearly does not mean I will be any less opinionated and as I seem to have built some group of hardened readers I will continue to Blog, perhaps two or three times a week, at least one of which, will appear in Chiswick Calendar’s Tuesday newsletter. If anyone has any bright ideas for the name of the next edition of this blog please let me know. I am sure I can come up with a suitable prize for any successful suggestion.

I think too that as this blog evolves from being Chiswick and Corona focussed, though while that is my everyday reality it will still form part of the narrative, I will also try to find a way of sharing this space with other voices. I was pleased to see that the two blogs containing the poetry of Niyi Osundare and Kadaria Ahmed had some of the most hits and so I will try to present more original writing or the views of some of my friends be they Nigerian, other African and particularly the sons and daughters of my mates wherever they are. Please feel free to send me suggestions or even pieces of your own work that you feel could be shared. Seriously, please do.

According to the data that comes with the website package, so far the most frequent source of readers is, unsurprisingly, the UK with well over a thousand. The second most popular is Nigeria, which accounts for some 30% of my readership. The restrictions in travel mean that I was last in Nigeria in November for my book launch and the Ake Literary Festival (which will be on-line this year, which opens up new opportunities) and that is my longest absence from Nigeria since the very early ‘90’s. I am aware, particularly since I have a readership in Nigeria (and many of the nominally UK clicks are Nigerians resident here) that I have not blogged a great deal about Nigerian issues. The situation in Nigeria with respect to Coronavirus is very confused, with very poor data. Speaking to some friends there you would believe there is little risk, yet speaking to others I am told of several deaths in the expat community – and I can tell you, if there deaths in that protected group there will be many, many more of ordinary Nigerians. So I feel I should write more on that subject.

The current focus on Black Lives Matter, Colston and other slaver statues and the increasingly public debate about the role of colonialism and empire are exposing massive ignorance about that very subject. That Amazon has just about run out of stock of books on the subject of race and Black British history is testament to some kind of desire to at least understand more about these issues. It is amazing that in Reni Eddo-Lodge we have the first ever-black woman sitting on top of the British best sellers list and this has to be a positive step. Yet, all these stories start at the same place. A massive continent that barely features in our collective consciousness. The enslavement of people was just one example, albeit the most heinous, of the extraction of resources from Africa. An extraction that is continuing at this very moment. An extraction that predominantly benefits non-Africans, including every single one of us who uses laptops and mobile phones or eats processed food or even (despite the only partially effective Fair Trade) most chocolate. An extraction that is decimating the remaining African rain forests and encouraging desertification, the rapid disappearance of species of animals and contributing massively to the Global Climate disaster. A small elite in every African nation, usually with the active connivance of the western legal and banking system and global corporates (plus increasingly, Chinese state owned enterprises) enrich themselves massively at the expense of the hundreds millions of their own people and the environmental health of the planet. Not unlike the increasing number of western billionaires whose wealth has grown exponentially during the Covid crisis. I have no easy answers to the plethora of questions all this poses but I am sure, as important that it is, that the toppling of a statue in Bristol means nothing to a five year old girl begging on the streets of Lagos. A Banksy painting does not help a mother of six feed her kids in the slums of Badia or Orile and whether or not some twat gets a prison sentence for pissing against a memorial will not save a family who has contracted Covid from being turned away from the only medical treatement in Kano because it is full. Of course, some bloke letting off steam on his laptop as he watches the rain from the windows of his fourth floor Chiswick flat does exactly zip for those people too. Yet, my memories of my time in Nigeria and the other twenty or so other African countries I have visited are not the doom and gloom that this post might suggest but are of laughter and colour and music and dance. They are of friendships and vibrant cultures, of late night debate and discussion, of ‘managing’ despite everything and the taste of pepper washed down with warm Guinness.

I would like to share with you a short video I ripped off twitter. After a short search I found out that this is Ama Ata Aidoo. Aidoo is a Ghanaian writer who would be around 80 years old currently. I do not know when this was filmed. I knew her name but confess I have not read any of her work. I intend to correct that failure. There is actually a great deal of strong writing by African women that is gradually coming to the fore.Chimamanda Ngozie Adichie is probably the most well know though Bernardine Evaristo (British but with Nigerian heritage) winning the 2019 Booker prize has put her up there. However, the woman who has been colloquially known as ‘the Mother of Modern African Literature’ is almost unknown. I was introduced to Florence Nwapa (1931 to 1993) and her work when the young ‘cultural hustler’ (his words) Onyeka Nwelue made a documentary about her life. It is a charming portrait of Nwapa, though, to be honest, it could have done with a little more robust editing, that is genuinely worth a watch.  I attach it here but it is about 90 minutes long.    https://www.youtube.com/watch?v=3ZT5_YeTPos

Nwapa’s novel “Efuru” is a mesmerising piece of writing about the life of an Igbo woman in rural colonial Nigeria. Its themes include the importance of children and marriage in Igbo culture and the struggle for feminine independence in traditional society. Published in 1966 it is probably the first ever novel by a Nigerian woman, possibly African woman, in English. It is a forerunner for African feminism and I strongly recommend it.

Anyway, let’s return to Aidoo and the clip I found on Twitter. In fact, I am going to leave you with two videos. The first is that clip which gives an African perspective of the extraction I spoke about. Aidoo is more articulate than I could ever be. The second is Seun Kuti and Egypt ‘80’s video for his 2016 song Black Woman, shot mostly in Brazil. The video finishes with a shot of his daughter Adara and partner Yetunde. I have no doubt Adara will continue the tradition of strong women in the Ransome-Kuti (and Anikulapo-Kuti) family.

here is Seun’s video in praise of Black and African women (listen to the lyrics) https://www.youtube.com/watch?v=nQ2KM78Mkro