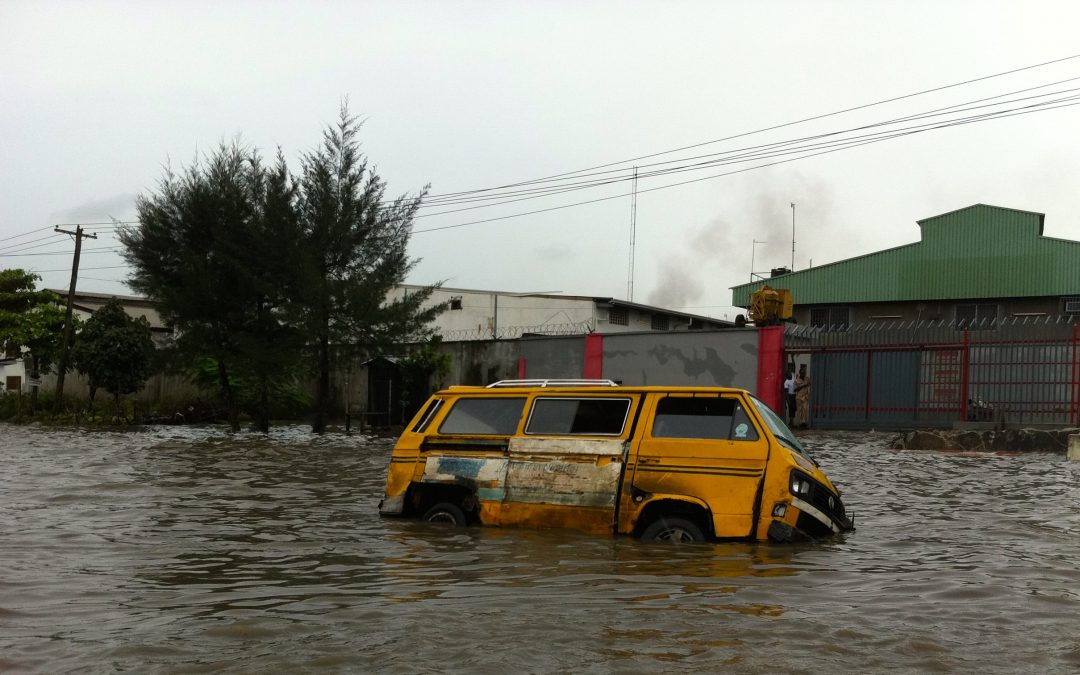 “When you’re drowning, you don’t say ‘I would be incredibly pleased if someone would have the foresight to notice me drowning and come and help me,’ you just scream.”

“The heat and fatigue were getting to me. I was beginning to feel distinctly light headed and the sweat was running into my eyes and blurring my vision. The paddle weighed heavy in my hand, my clothes long since soaked, I didn’t know or care whether my bag was still in the canoe with me. Through the haze of the downpour I could just make out the hunched shoulders of my ‘driver’ in front of me paddling hard against the current. Exhaustion makes a man think many things. The most obscure thoughts spring into mind and out again. The curtain of rain enhanced this feeling of isolation that the normal world no longer existed. I had been in Africa for many years but as a businessman not an explorer. What am I doing here wondering when next I could find relief from the relentless water, the tiredness and aching limbs? And the rain. How noisy it was. I had to shout to attract the attention of the shape in front of me. “Paul, how far now? I can’t take this much longer.” “Don’t worry Oga, I can just see Total Filling Station. We should meet Keffi shortly.”

“Pull yourself together” I thought to myself “You can do this, just a few more minutes. As I thrust the paddle back into the foaming tide and felt the splinters dig further into my bleeding hands my mind slipped back to the fond farewells to my friends at the Motor Boat Club. It seemed a week away instead of a few long hours. “Don’t do it Keith. It’s too dangerous. At your age, even if you don’t get swept away, you could have a heart attack!” “Oh, don’t worry, I’ll call you later.” Call! That’s a joke, as I felt the seriousness of my situation, I tried. ‘Network busy. Network busy’ and then a freak wave snatched the handset from my grasp. That was an hour ago, just before I saw the bloated corpse of an expatriate stuck under the roots of an upturned tree. I later heard it was the owner of a local bar, Havana, who was swept away as he tried to swim from his car to the door of his premises. His staff had grabbed his outstretched hand but the pull of the current was too strong and his wet fingers slowly slipped from their despairing grasp. Either that or they shut the door and waved goodbye.

This may be a slight exaggeration but at this point let me quote page This Day (June 29th) on Dr Dayo Mobereola, The Managing Director of Lagos Metropolitan Area Transport Authority (LAMATA) in which he stated that the “Lagos State Government is giving Lagos World-class transport facilities” (sic). “He also assured that other modes of transportation, such as rail and water, were being developed in order to give riders choices in commuting from one point to another.” Okay, now I understand. Ensuring our roads are flooded by allowing people to build over drains, leaving these same drains to be clogged up and generally making sure there is nowhere for the rains to go is all part of the plan for………water transport! When they talk about ferries, I had thought they meant from Marina to Apapa or across Five Cowrie Creek. But no, they mean ferries down Awolowo Rd, Apapa-Oshodi Expressway and Ozumba Mbadiwe.

Very clever! Think of the advantages. For the ‘economically challenged’, instead of Okada, there would be canoe-taxis (N50 per splash, N100 to be put on dry land). For the very rich, instead of Ako Ashewo we could develop Venetian style gondolas. Imagine the boost to tourism as visitors could glide romantically down Kingsway under the moonlight as the conductor, sorry, I mean Gondolier, softly croons ‘Water no get enemy’ by Fela. Go-slow would have a whole new meaning (float-slow vs. paddle-go?). Certainly it would be safer if you fell asleep in the traffic after three hours on Ikorodu road. Instead of a fender bender in the rear of the car in front and the inevitable katakata there would be a slight jolt. In fact, taking a leaf out of the ancient Roman’s book Third Mainland Bridge could be turned into a giant Viaduct or water bridge to facilitate paddling from Kingsway Canal to Gbagada Lake. That would stop all the accidents where Molue (osa straight) go over the parapet and might save may lives, as long as the passengers were wearing life belts instead of seat belts. Oshodi could be twinned with Venice though Nembe Waterside would be more relevant. 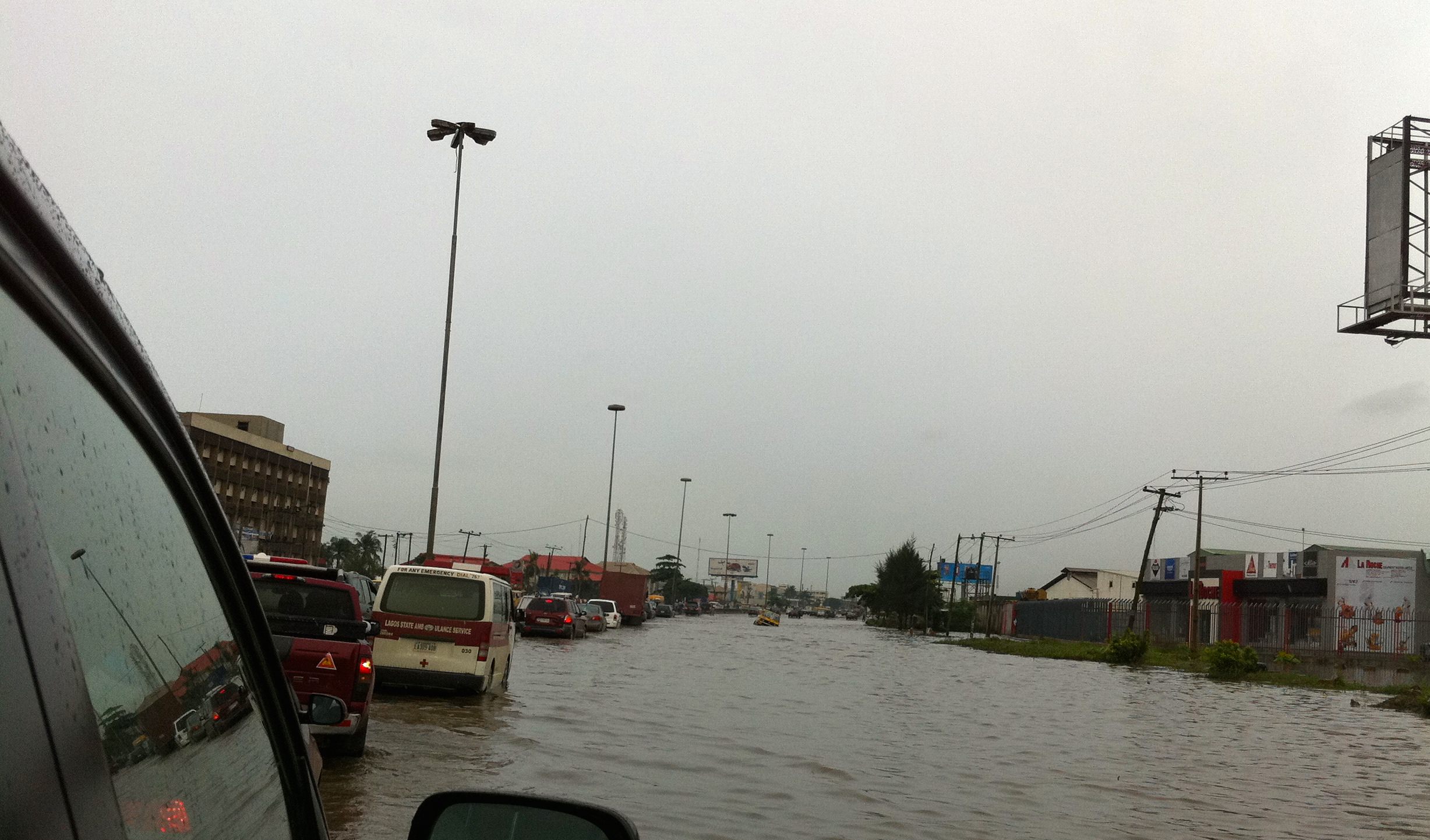 Squeezing to the side of the Apapa-Oshodi ‘Expressway’ to avoid pot holes (since repaired to be fair).

There would be less security problems, at first anyway, as area boys wishing to become armed robbers would need to learn to swim holding their weapons between their teeth like the pirate boys in Peter Pan. After a while they would hire outboard motors to cruise along side all the boats stuck in the float slow. The security agents would have to respond. Traffic cops would have to stand on a box to keep their head above water to direct the traffic. Having said that they would first have to overcome their aversion to water. I am sure hydrophobia is prevalent among them and their LASTMA cousins because as we know as soon as it rains they ‘go disappear’. Instead of the various ‘siren boys’ bashing our cars there would be a new public nuisance of politicians’s escorts in high power speed boats. Instead of smashing your wing mirror with a stick as your ‘instant fine’ they could puncture your rubber dinghy. As traffic calming measures we would replace sleeping policemen with floating policemen.

As with all revolutionary concepts there would be those that suffer from this reversion to water life. Bukkas would have to congregate on little islands to sell their soup or lean out of the first floor windows. Sort of paddle-in, paddle-out fast food. What about the poor barrow boys or omolanke? Or street hawkers? “MTN cards, recharge…glug glug” What would they do apart from stand on tip toe? That would be bearable in the calm but every time an ‘oppressor’s’ speedboat went by the wake would wash them away with your change. Also, I hate sodden Suya. No, the more I think about it the whole idea, though brilliantly conceived, would be more trouble than its worth.

I do have another idea though but no, it would never work. You will laugh at me for suggesting it. How about preventing people from building over the drains? What about actually taking away the piles of dirt and trash after clearing the storm drains so they don’t immediately wash back in them at the start of the rainy season? Or, I am sure you might think this too far fetched, how about providing police and other traffic and security agents with waterproofs so they can stand and control the traffic and prevent crime………even when its raining? No, that’s too silly of me. It will never happen. Flooding the whole of the Lagos metropolis and creating a water state makes so much more sense.”

I wrote this in my Insider Outside column in June 2007. The photographs I took in between 2010 and 2013 on trips to and from work – living in Ikoyi and working in Orile. 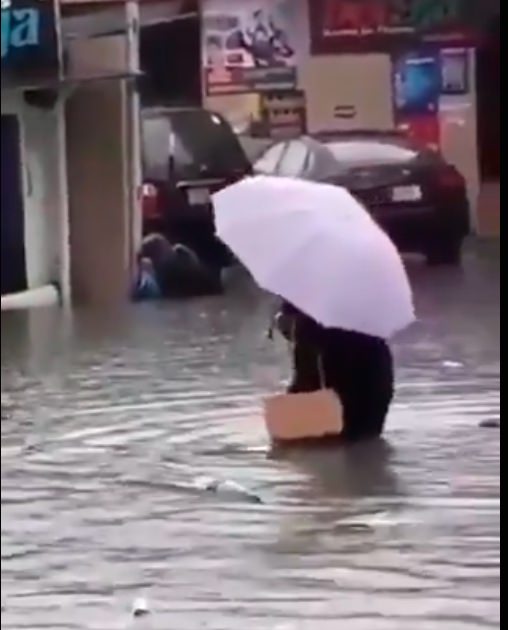 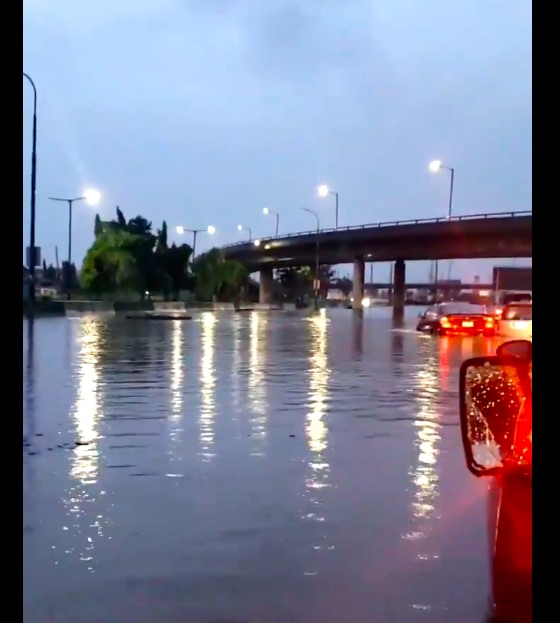 These pictures are from this week and are stills from videos posted on Twitter.  I attach the links that takes you to several of these Videos and which also demonstrate how Lagosians have a sense of humour and are fatalists par excellence.   https://twitter.com/search?q=lagos%20flood&src=typeahead_click

To start to analyse why the flooding today is still as bad as it has been for decades would take another two Columns. Corruption and incompetence at the top and throughout Lagos State are clearly part of the problem. While there has been massive spending on infrastructure it has been nowhere enough for a city of twenty million people. The richest state in the Federation and with huge amounts of Internally Generated Revenue from tax and levies, it should have done more. For those readers who do not know Nigeria, if Lagos was a country on its own it would be something like the fourth or fifth largest economy in Africa. However, much of its worst infrastructure, such as the Port area of Apapa and main arterial highways are actually owned and administered by the Federal Government. Yet, everything is not just the responsibility of government. Irresponsible corporates, multinationals and indigenous are equally the cause of much of the flooding as well as the pollution. This has been one of my constant themes in my columns and even in my books. The people that suffer, of course, are the ordinary people of Lagos. When you see some of these pictures you will understand better that for many of them Covid-19 is just another hurdle and that social distancing is something for foreigners and the elite. That is why the rate of infection is picking up pace and the worst is yet to come on that continent.

So, when I do my daily exercise /shopping stroll down Chiswick High Street and am tempted to rant about two inch deep puddles, cracked paving stones and leaves in the gutter, I remind myself to take a deep breath and count my blessings.

Omolanke – a labourer for hire who has a wheel barrow

Molue – a Lagos bus, also called Osa Straight literally refering to their habit of going ‘straight’ over the side of the bridge into the Lagoon!

Ako Ashewo – Taxi (yellow version) literally call girl’s carriage as they were once the only people though to be able to afford them and they needed to keep their clothes clean.

*Havana was a local bar on Ribadu St (off Awolowo Rd, where expats and Nigerians would mix). The proprietor Ray was often on a diet! When this first came out the regulars saw the joke but he was not particularly amused!