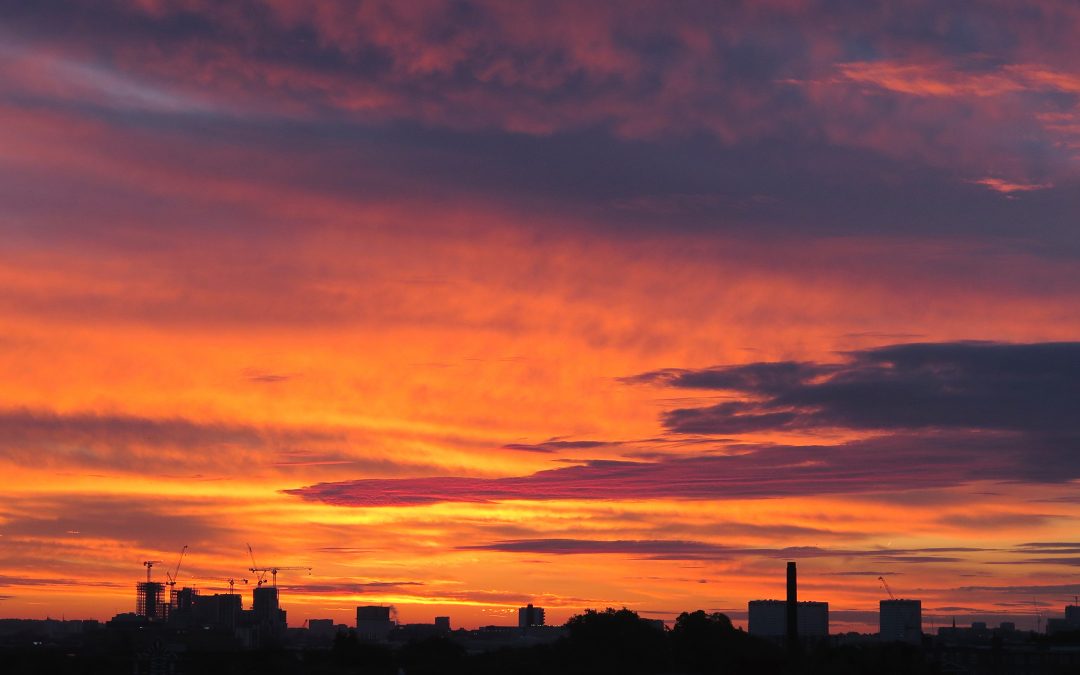 “In the midst of each epoch, I fully realize that a new epoch will dawn.”

Looking east from Chiswick I wonder if there really is the dawn of a bright new post-Covid world on the horizon. Is it a responsible government in Westminster or the financial imperatives of the City that is dictating policy? Every day there is another step towards ‘normalisation’ I wonder if our government is managing this process or whether there is another process that is managing the government. Whether it is from anecdotal conversation or just what I see with my own eyes it seems that the daily briefings just seem to announce ‘decisions’ that just confirm what is already actually happening. The lack of confidence in the official control of the progression just seems to enhance the anxiety that some people feel, while giving licence to those who no longer feel briefings and guidelines actually mean anything. It seems to me that we are in a kind of limbo world that superficially looks as if we are heading to what people laughingly call the ‘new normal’ yet somehow is some distorted half dream, half nightmare. I seldom watch these ‘briefings’. If I catch glimpses on the news or on twitter, posted inevitably to illustrate some new act of insensitive folly, my head superimposes a soundtrack of some maniacal organ grinder in which Hancock is some demented dancing monkey. The platitudes that come out of politicians’ mouths just seem so contradictory to any genuine analysis that at times I feel I am part of some real life disaster movie. The Orange-Kungfluquoting-Klansupporting-spittoonbrained numbskull’s dysfunctional election campaign against a backdrop of BLM protesters and right-wing lynch mobs just makes the moment even more surreal. Sometimes I just feel that I. Do. Not. Know. What. The. Fuck, is going on. Is anyone out there in charge of anything? Is there a driver of the bus that I am sitting in? Or maybe I really am in one of those 1940’s style psychological thriller cum horror movies where the tram is hurtling down the hill and the driver turns round and the face is a grinning skull – except in my movie the face is no skull, it’s a weirdly alternating Trump/Johnson visage.

Bump. Ugh. That feeling when you suddenly dream you are falling out of bed and wake up with a lurch.

I went down the pub on Saturday. In fact, over the weekend I went twice. Now, I have made it clear that this ‘Corona Blog’ started with my last pint in The Raven and it will officially end with my first pint back at The Raven. So these pints don’t count. They are, errm – research! There are so many boozers open for take away pints near parks, public spaces and particularly the riverside and they are booming. Is it a good thing or a bad thing? It is not for me to deny anyone the right to do what I was happy to do. Saturday afternoon son George and I walked along the river and across to Barnes. There were plenty of people out but generally there was reasonable respect for people’s distancing. There were a few cyclists where they are not mean to be but it was relaxing. Walking along there was a mix of ages and of multi-generations of families but once we crossed over and joined the queue at The Waterman’s Arms in Barnes the average age was well down into the late twenties/early thirties. I have to say, the organisation, the sanitation and insistence of distancing in areas within the control of the pub, was excellent. That too is my experience of The Black Lion by the Upper Mall along Hammersmith Riverside. In Barnes, a ‘milk carton’ of four pints of Harvey’s Sussex Bitter between us went down a treat as we lent against the wall along by the river and it was pretty easy to maintain a distance from other ‘pods’ of people. I suspect that as the evening wore on that was going to become more difficult.

This picture is the Upper Mall around 8 pm Saturday. Relaxed, mostly but not exclusively a young crowd but more of a mix than Barnes. However, the closer you got to the pub the denser the crowd. And here is the problem. No matter how responsible the pub is, it was pretty obvious to me there is only so much they can do when their customers are out in the open. After a couple of pints, the inhibitions start to slip and, with it, all those things like distancing, personal space and sanitisation. Then of course, the bladder gets full. Some pubs seem to have opened their toilets. I think that is technically against whatever rules there are but is clearly the right thing to do because I know that some residents near public spaces are suffering from anti-social urinating around or in their gardens and driveways. These issues all illustrate the difficulty of the move to open pubs on 4th of July that the government have been signalling along with a reduction in the required distancing down to one metre. The details on how to order, how staff sanitise themselves and the toilets, how any food is served is yet to be made clear. That the dementedly dancing monkey said on the Marr show that customers could sit ‘back to back’ in pubs showed how utterly out of touch he is – has he actually even been to a proper pub? There are suggestions that people will have to register and I hear some pubs will only allow customers who pre-book a table.

I want to have that pint in The Raven. I want the shops and cafes and small businesses in Chiswick to be able to re-open and to survive the Covid crisis. I want to be able to jump on a bus or a tube and visit friends. I want to meet them in a restaurant in town and compare post-covid feelings over a glass of wine on a clean white table-cloth. I want to be able to take a Euro train or a ‘plane to visit my sister in Spain. But, I won’t deny it – these things make me apprehensive. I do not want to see more of the build up in traffic. I do not want to see the queue of ‘planes on the skyline beyond my balcony. I do not want my rediscovered love for birdsong to be submerged back into the cacophony of urban living. I have enjoyed the sound of children riding their bikes, following their parents like baby ducks and breathing air that is substantial less polluted. I want the NHS to get back to looking after patients whose operations have been postponed or whose cancers have resurfaced. I want all those doctors, nurses and key workers of ethnic minorities who have suffered exponentially so that the rest of us have an NHS to turn to, to stay safe. I want children and students to return to their studies but I want teachers and care workers to stay virus free. I want a government that can consider these contradictions in an open, transparent manner, in the best interests of all residents of the UK regardless of ethnicity, colour, gender and religion and devoid of pandering to the vested interests of an unelected elite. Some chance. I am going down the pub. 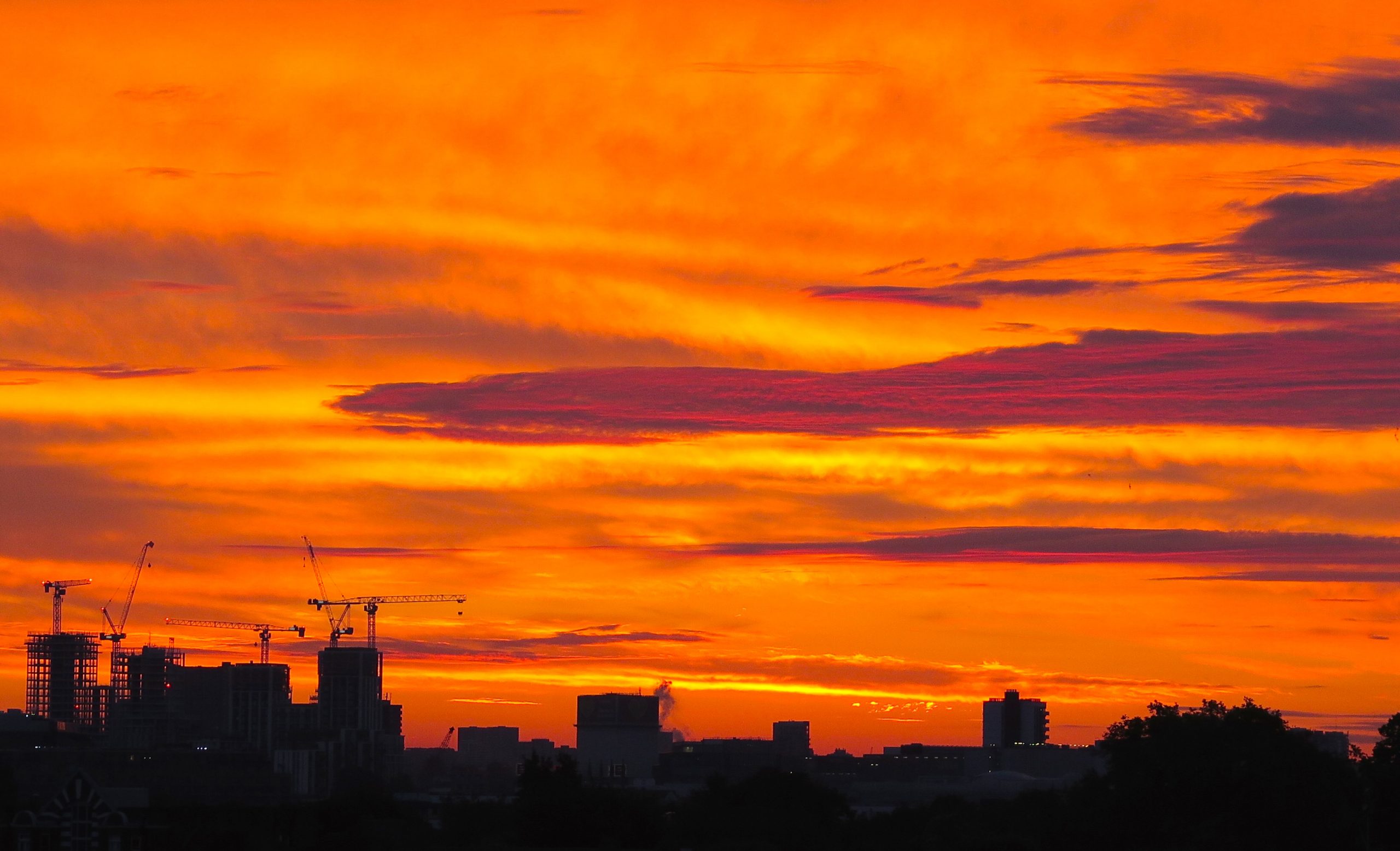 I have chosen today’s Vinyl to share for two reasons. One is simply because it has a track entitled ‘Orange Skies’ and the second is to do with the band’s songs that recognise, albeit in a different era that ‘the time is out of joint’. 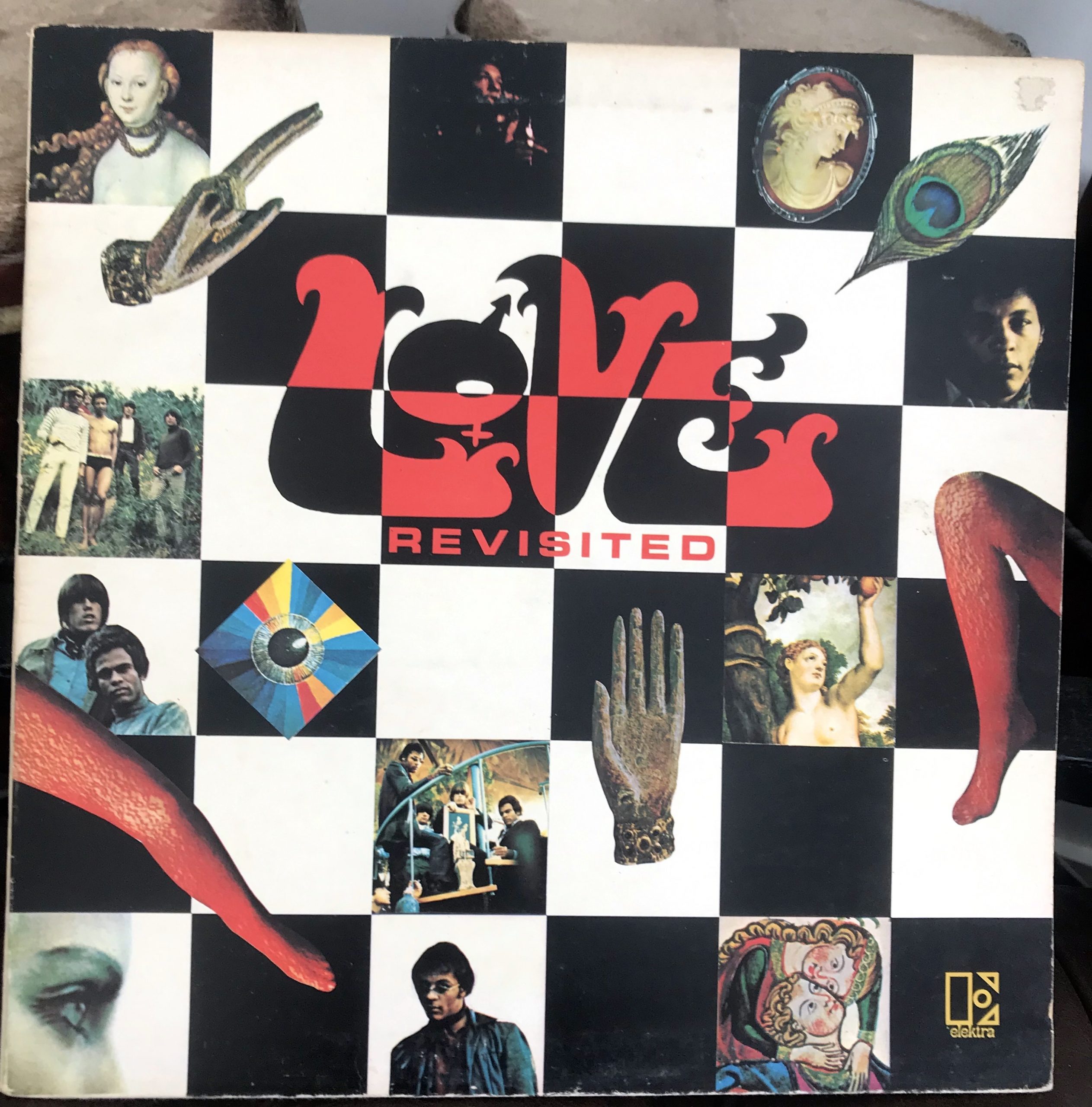 Love were a pure West Coast band and never been massively well known over here. I think I got to know their music from the albums of my housemate, by name Keith Parrish, when I lived in North Carolina in 1972/73. I must have bought ‘Revisited’ when I got back to the UK because I am pretty sure I had it in the small collection I took down to Brighton later in 1973. Love continued recording after this, releasing eight albums if you include the 2012 Black Beauty – which I had not heard of until I researched this piece.   However, their core period was short and covered just three albums in 1966 and ’67. It was from these three that this compilation (strangely missing from their Wikipedia page but appears on Discogs) was constructed and released in 1970. There music was based on folk rock but their eccentric leader Athur Lee brought in a whole range of influences and sounds including Latin rhythms and horns. On one level their music superficially focuses on personal love stories with a strong druggy psychedelic content but there was a strong subversive side to their lyrics with references to the Vietnam War and whether the twin evils of materialism and commercialism represent a healthy mental state. An acid trip or Covid–lock-down fever? They seem pretty similar to me at times.

So, the first clip is actually a Bacharach and David song from the album “Little Red Book’. I am not sure they had this style in mind when they wrote it. This clip from “American Bandstand’ in 1967.       https://www.youtube.com/watch?v=ftO9ClIhFAo

In 1996 leader and principle songwriter Lee was wrongly convicted for discharge of a firearm. The Judge made an example of him, partly because of drugs offences, a domestic violence indictment and his anti-establishment record. In 2001 he was released and the judgement overturned. For my second clip then I chose a 2003 performance from the Jools Holland show.  ‘You Set The Scene’ is on the featured album. A British group called ‘Shack’ back him and I think they do a pretty good job. By 2006 he was diagnosed with and died from Leukaemia so given what he went through I find these Jools sessions quite poignant.       https://www.youtube.com/watch?v=iQFOL8UrRsA

* Dawn Photo Credit – George Richards after all all-nighter to complete a Uni Assignment.