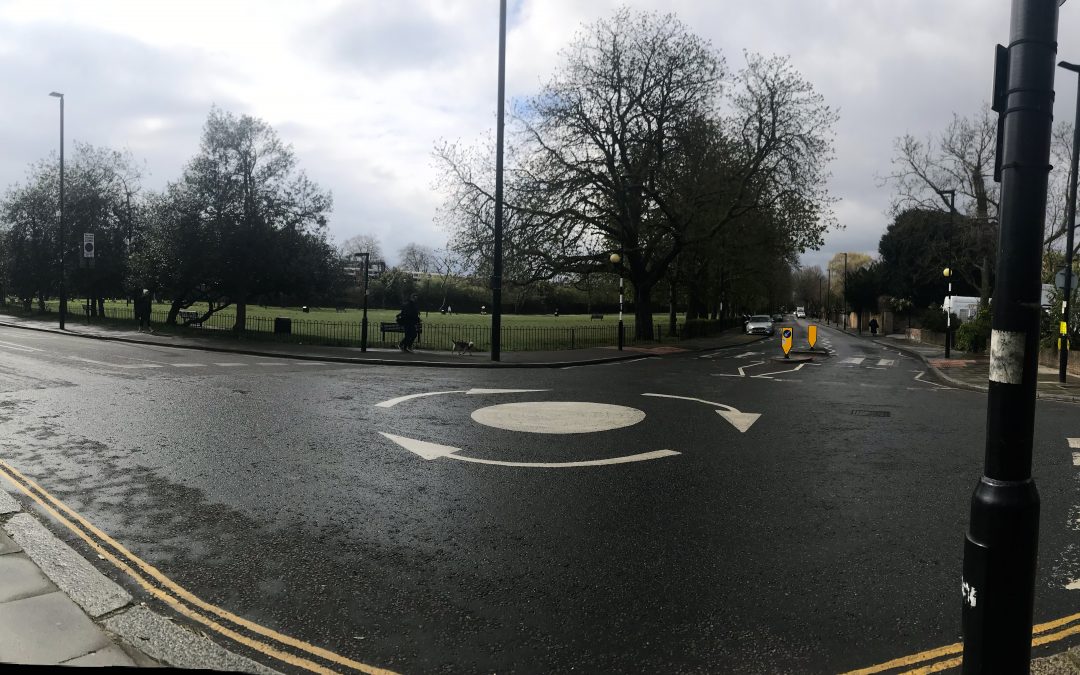 on white crusty bread, no sauce.

A bacon sandwich (also known in parts of the United Kingdom and New Zealand as a bacon butty, bacon bap or bacon sarnie, in Ireland as a rasher sandwich and as a bacon sanger in Australia) is a sandwich of cooked bacon between bread that is optionally spread with butter, and may be seasoned with ketchup or brown sauce. It is generally served hot. ……..Bacon sandwiches are an all-day favourite throughout the United Kingdom. Its prominence in British culture such that in a UK poll it was ranked the number one thing people love about Britain.

A panoramic view of the deserted Bedford Corner – normally so busy.

It was blooming cold yesterday and I really felt it after being cosied up in my flat the entire weekend. Nevertheless I was determined to get some exercise and, in any case, I wanted to check out Plum Duff. * Now, there are bakeries and cafes doing take-aways nearer me but I need the walk and I remembered they do bacon sandwiches in fresh white crusty bread – you’re getting the message right? Its about a twenty minute walk from me and it was chilly and the streets were fairly empty as I yomped up Turnham Green Terrace and The Avenue so I could keep up a brisk pace avoiding any people who wanted to share my pavement space. Once I was there was a short queue (they just let two people in at a time) and a few Royal Mail guys from Bollo Lane sorting office who ring up before popping round to collect their order (big thanks to them for keeping the post going) before I was in. I noticed they also had a few provisions for sale so I added a fresh loaf, eggs and milk to my sarnie order and a take away flat white. I chatted to the staff who are also doing deliveries with no charge for the vulnerable in their local area (sorry I should have taken the phone no) and off I went. 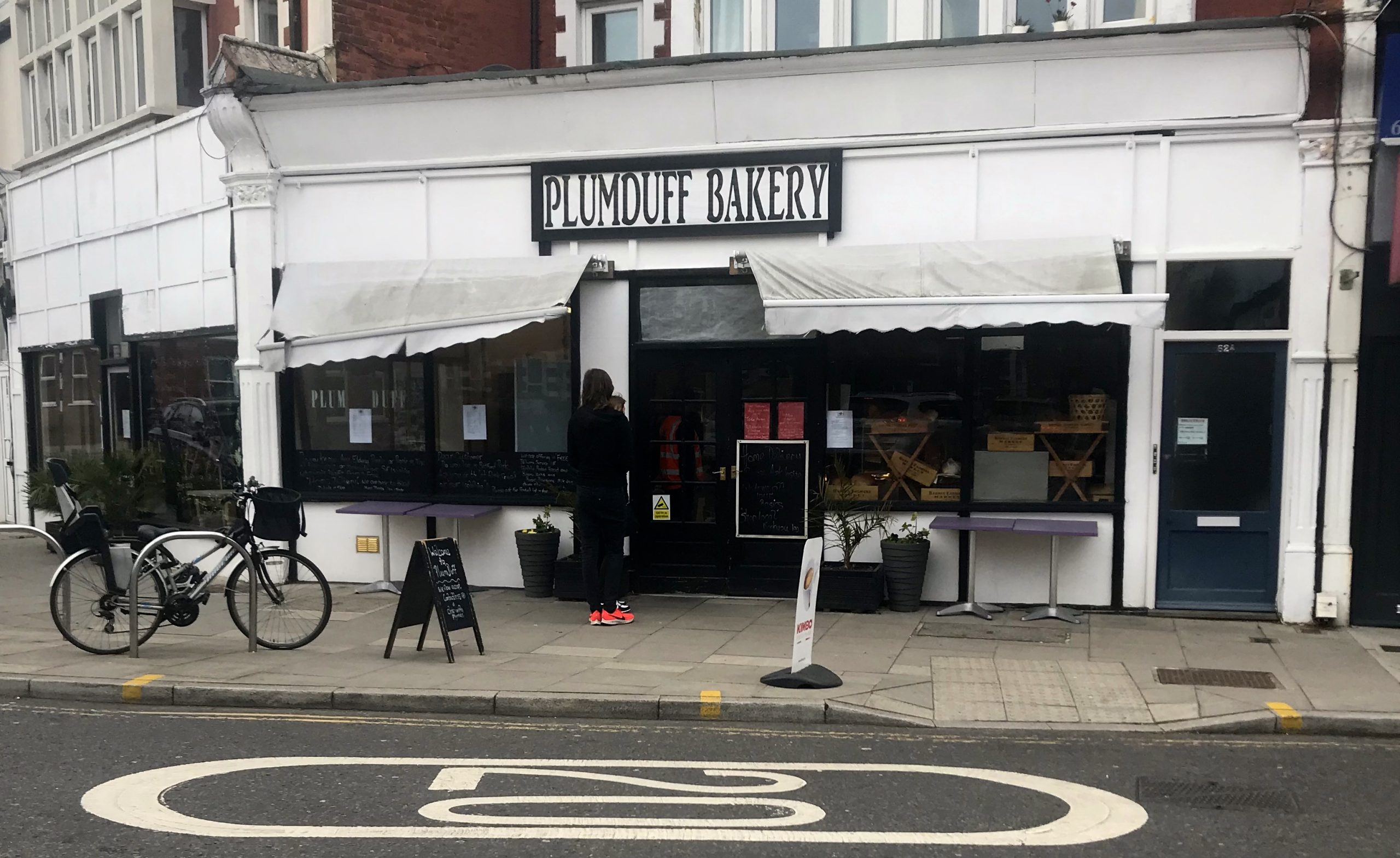 So, as there are no longer tables and chairs outside and we are not supposed to be sitting down on benches I had planned to eat my butty and drink my coffee on the go. This already proving logistically more difficult than I expected, probably because I also now had a bag of shopping and I am not a wonderful juggler, then it started to rain. And I mean that steely cold, penetrating type. This was not the sandwich experience I was planning until I fled to a bus stop, put my shopping on the weird half seat/half rail thing that many bus stops have these days and gave my brunch the attention it deserved. Just for posterity here it is. 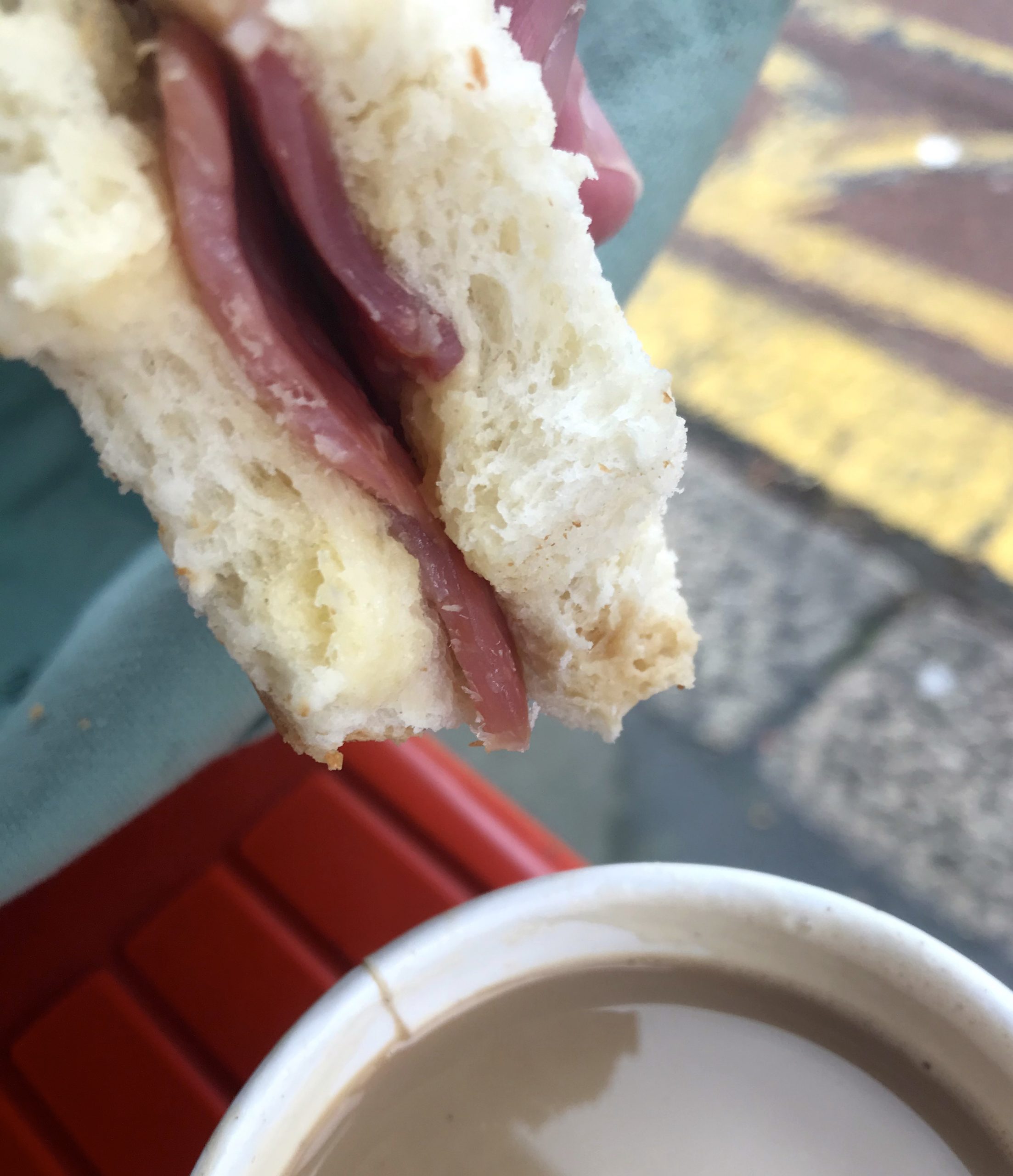 Just the job. Butty, Sarnie, Bap or plain Sandwich – it hits the spot.

The bus that plies The Avenue from the High Road is the E3 and I noted that there did seem to be one every 5 minutes or so and they all seemed to have just two passengers on. I am fortunate that I walk for my joint exercise and shopping excursions but once again, a big thanks to London Transport and allied staff for keeping services open for those that need them.

A few minutes later, still savouring the flavours of my picnic, I was able to pop in to Oranges And Lemons the greengrocers, on Turnham Green Terrace. They seem to be as busy as ever and I had to wait a few minutes outside as they monitored numbers and distancing inside the shop. They really do have an impressive array of stock. I noted that, being very “Chiswick” they had thirteen varieties of tomato, eight types of mushroom and six of red pepper. As I am trying to eat very little meat during my sojourn this enables me to be inventive with my cooking – I might even share some of my recipes in future. I did note too, to show balance towards my more carnivorous readers, that Macken’s, the butchers, had plenty to offer and one of the better-organised spaced-queuing systems. 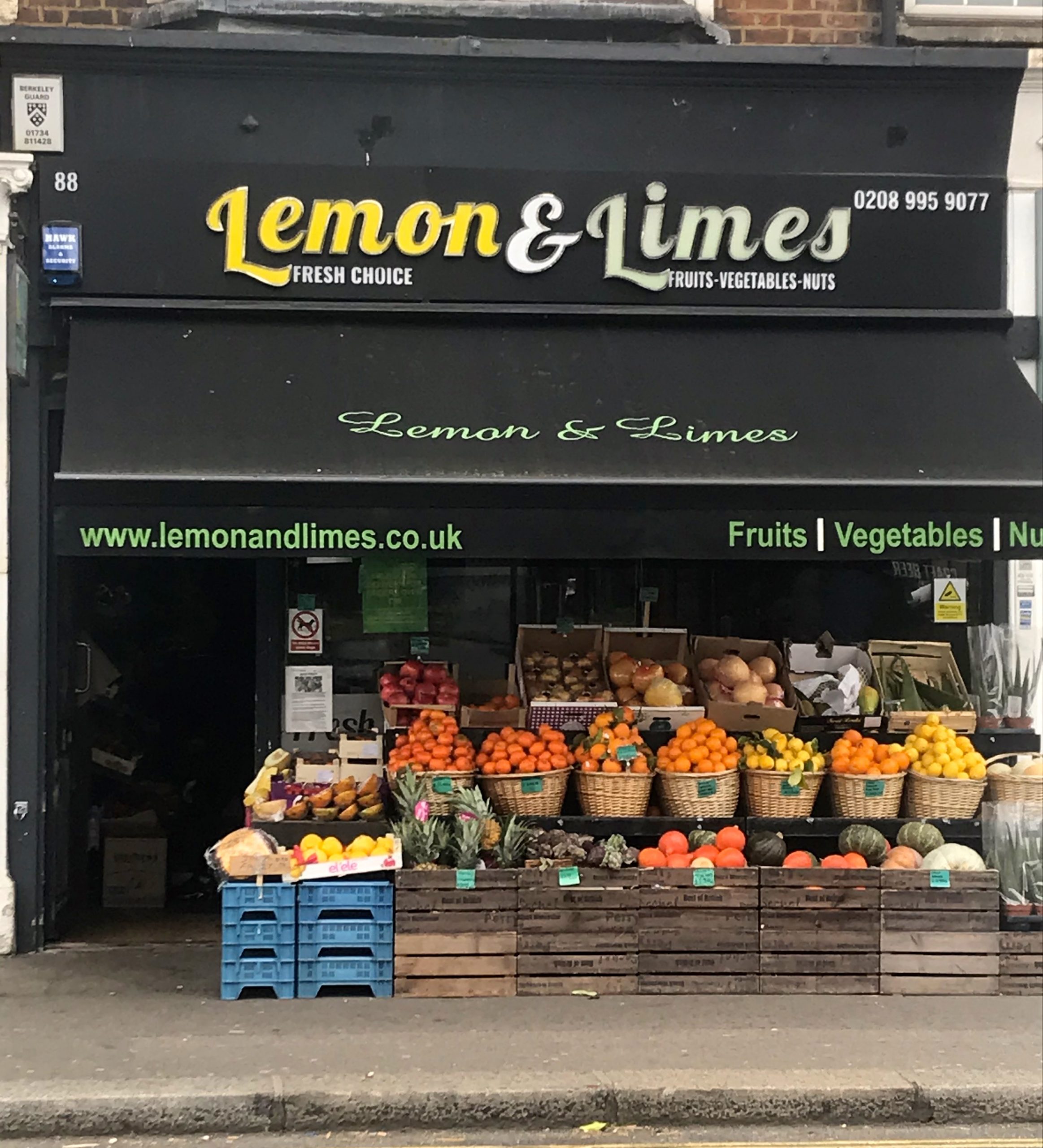 Fully stocked within and without – plenty of basics plus, being very “Chiswick” plenty of organic and exotic fruit & veg. 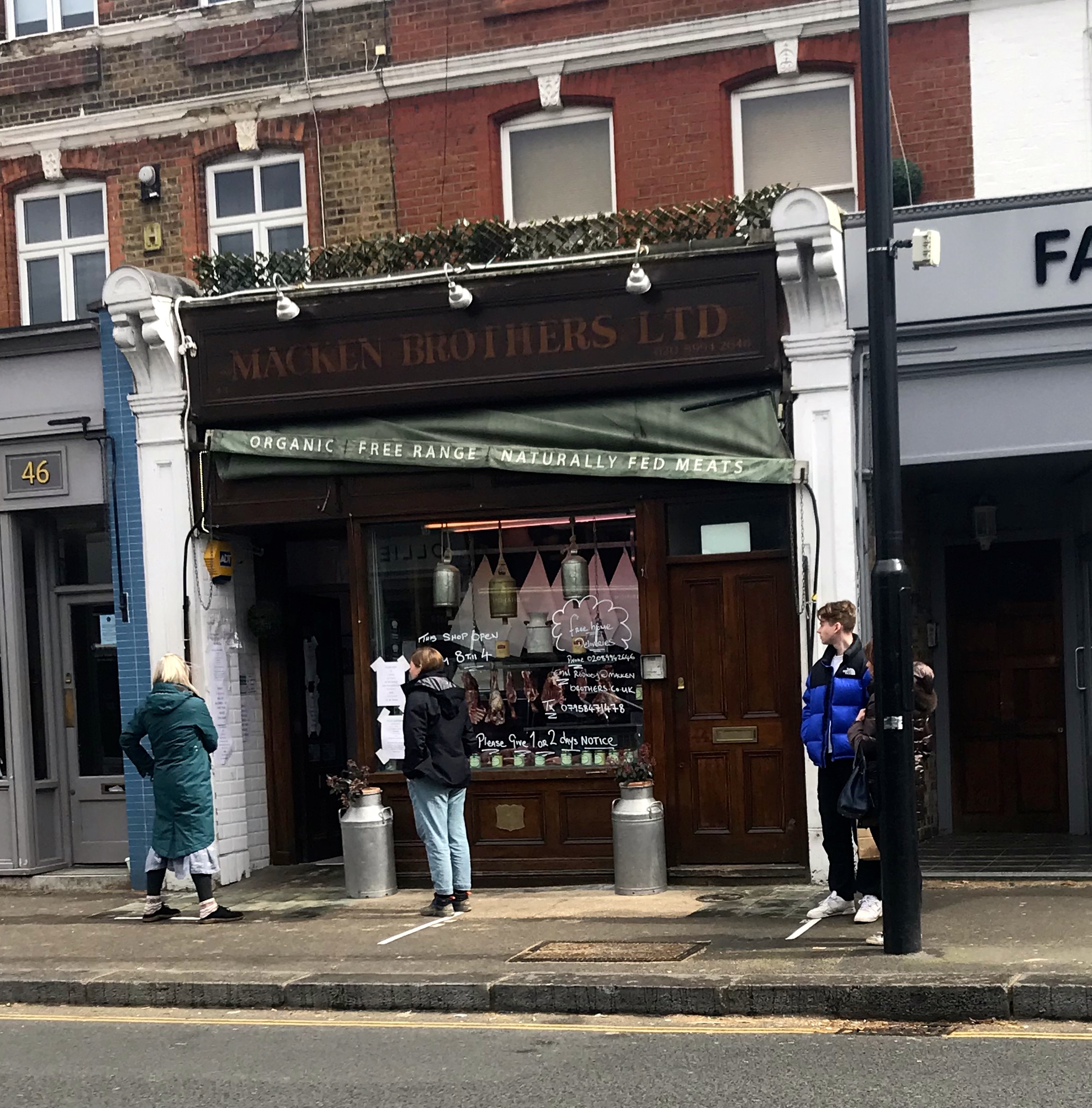 Sensible socially distanced queue – Note the markings on the pavement.

Why would you want to go to a chain or a supermarket when you can support your local trader ?   Many small traders in our local communities were already struggling before the onset of Covid-19.  After the crisis we could potentially find ourselves left with High Streets with nothing but large chains.  Personally, I find that an appalling possibility.  I will be doing everything I can to support local businesses, whether via my shopping trips, on-line purchasing or ordering take away food.  As William Bell wrote (albeit in a different context) “You don’t miss your water ’til your well run dry”.  **

* Plum Duff Bakery is at the top of The Avenue as the road bends and before you get to Southfields Playing Fields.

** William bell also sung it but many think the best version was Otis Redding on ‘Otis Blue’ 1965.