In which our hero ponders the Chiswick of his youth against the one of today.

“When we think of the past it’s the beautiful things we pick out. We want to believe it was all like that.”

If you have read some of my previous Blogs you will know that I have referred to myself as a ‘local’ (or, as my Lagos friends will say “Omo Ile” or ‘son of the soil’, which sounds so much more earthy) but what is a local?

I was not actually born in Chiswick but was brought up down the road in Hounslow. I was born in a council flat in Pimlico, which was the area where my father’s family were based and where they were bombed out during WWII. My Mother’s family lived next to Hounslow Bus Garage and she went to school at the old ‘Spring Grove Central’. She told plenty of stories about life in this neck of the woods during the war. When my parents were courting the tube only reached as far as Hammersmith so if they went to a ‘dance’ (not discos or clubs in those days) he would walk her home to Hounslow from Hammersmith and then walk back again. Occasionally he would miss the last train and walk all the way back to Warwick Way, near Victoria Station! So many of those stories – but that would be a digression. Anyway, when I was about six my parents bought their first house and we moved to Maswell Park Road close to what was then called “Hounslow Southern Railway Station”. After primary school nearby I went to Isleworth Grammar and my sister, three years later, joined the first ever intake of Chiswick Comprehensive that was merged from the Stavely Secondary Modern and Chiswick Grammar Schools. The union of those two schools into a single ‘comprehensive’ school was rushed for political reasons and the first few years were a disaster. The two schools were too far apart and the preparation for what was a very large school for the time was incomplete. The disorganisation gave opportunities for massive truancy and my sister has plenty of tales of bunking off down Chiswick High road with her new mates who came from an estate at the top end of Devonshire Road. Devonshire Road was not then the twee boutique, restaurant and antique-shop filled treasure it now is but was actually the home of the most violent gang of skin heads in West London, as I shall recount. 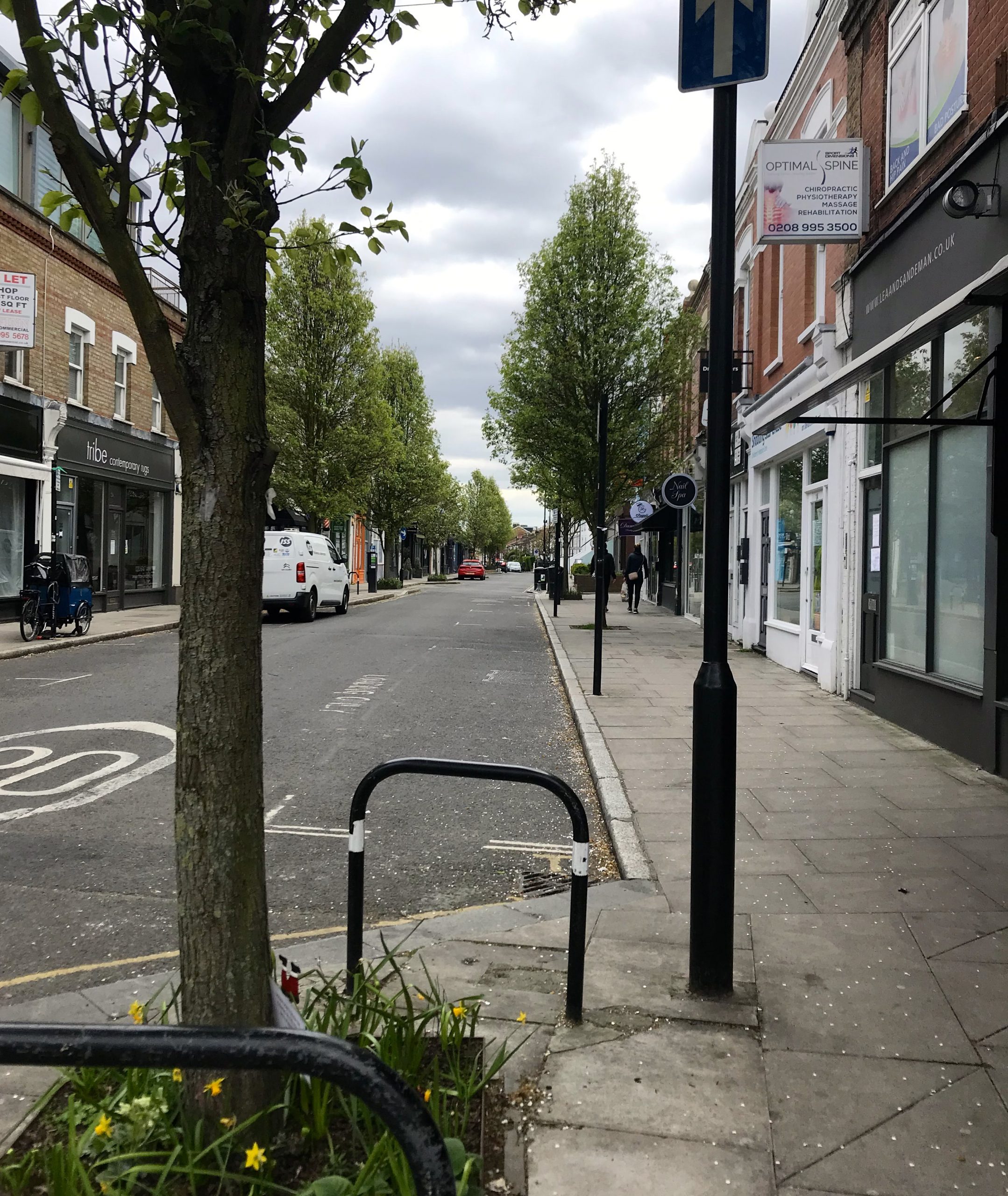 Devonshire Road, as it is today – albeit quiter than we are now used to seeing it – but it would have been very different in the era of “The Devonshire Road Gang”.

There are those that bemoan modern life and denigrate attempts to create a multi-cultural contemporary society with the cry ‘it was better in the old days’. There are echoes of this in the resurgence of the ’blitz spirit’ urban myth that falls so easily from the lips of populist politicians. Much of the West London and, indeed Chiswick, of my adolescence was pretty tatty and, it has to be said, violent. One of my closest school friends was from Dale Street, parallel to Devonshire Road. His childhood memories of those streets were of houses, now selling for around one and a half million pounds, with no bathrooms and broken windows. Most of them were not owner occupied but rented from absentee landlords or the council. In fact, in the early ‘80’s he was effectively squatting in the house that was officially rented to his grand parents (long since deceased) when someone came to the door. The Housing Association was auctioning off these run down terraces and the caller was thinking of bidding for one. He asked my mate Ian if he was prepared to move out for an ‘inducement’. The house was bought for 25,000 pounds and Ian accepted five thousand to vacate! 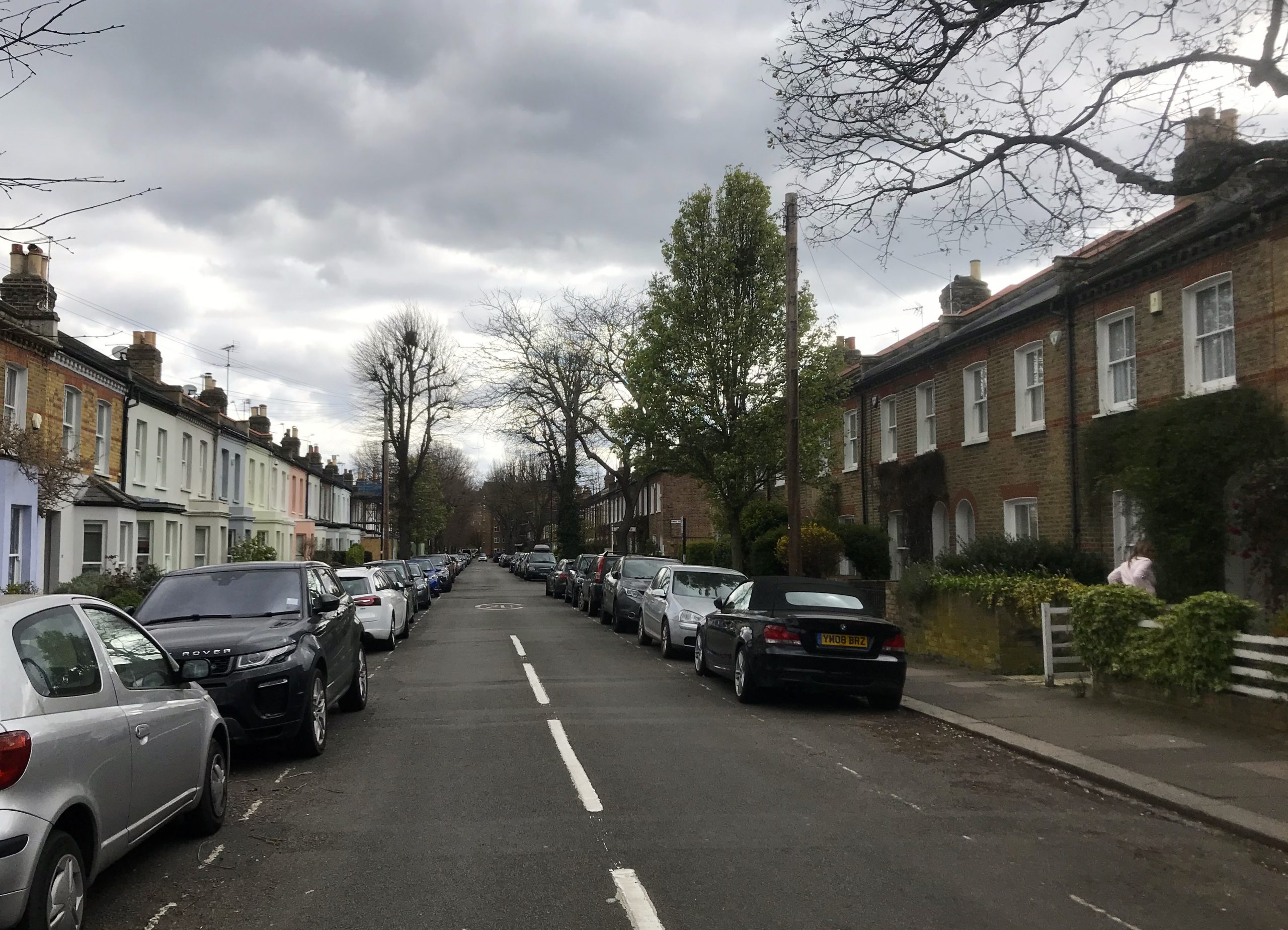 Dale St today. Terraced houses, originally built for workers building the railway, going for well over a million with bijoux extensions and en-suite bathrooms when during my adolescence they were still shabby council run social housing.

The inhabitants of that part of Chiswick were far from the high-income owners of today. Ian has a childhood photograph of himself and a neighbour, Mel Smith of Alias Smith and Jones fame, sharing a tin bath in the kitchen. He claims that his grand parents and other neighbours refused to speak to one family in the street because they had been moneylenders during the war. Many blitz families relied on what we now call ‘pay day loans’ with exorbitant rates just to get by – another nail in the ‘blitz spirit’ coffin. By the time I used to catch the bus from Hounslow to meet him in the ‘Packhorse’ or the ‘Packhorse and Talbot’ my memory of Chiswick High Road was of greasy kebab shops. No organic, free trade products in sight. Not that we came this way very often for fear of the ‘Devonshire Road boys’. My usual hang out was the bowling alley in Hounslow close to The Bell Inn. That was the home of “The Hounslow” where on a Saturday night the older boys would stream out to catch the 727 bus to Southall where they would attack young East Asian immigrants. I was too young and already disenchanted with this violent sub-culture and around that time there was an incident that turned me off the skinhead culture forever. ** In those days the old Hounslow Town Hall (I don’t believe the building still exists) was the place to go for the ‘Saturday Dance’. I certainly remember seeing Simon Dupree and the Big Sounds play there and still have the 45-rpm single “Kites” that I must have bought at the time. However, the evening I do remember, for all the wrong reasons was when the singer and Children’s TV presenter ‘Ayesha’ came to play. It turns out a number of ‘The Devonshire Road” had infiltrated (everything was highly territorial) and a skirmish broke out. One of ‘The Hounslow’ was hit over the head with a fire bucket and the skirmish turned into full-on mayhem. I managed to squeeze out and I remember the fighting carrying on into the street. That was the last straw for me and I switched my allegiance to more peaceful activities. However, I was a later a regular on the 727 on a Sunday night to the Farx Music Club in Southall. I would love to hear from anyone who used to go there as there is very little on-line about it. 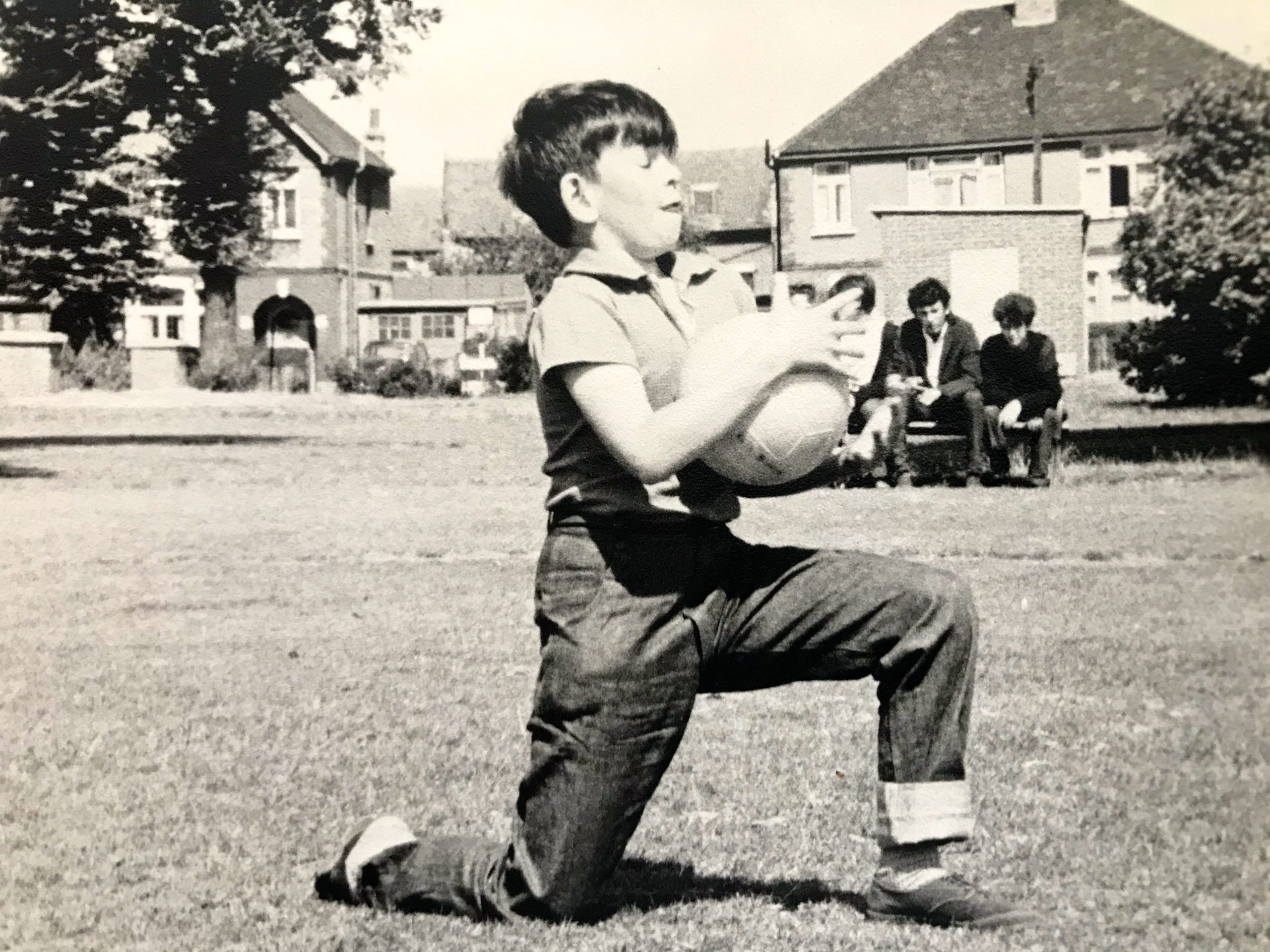 I could not find an old picture of myself during my brief skin-head era so here’s an earlier one taken in Inwood Park, Hounslow, circa 1961 with early versions of Teddy Boys looking on less than admiringly!

So, being a local can have different connotations to it. When I was eighteen my parents moved away from Hounslow and I took a different path. However, much later and entirely co-incidentally one of my closest college friends moved to Chiswick and his two sons attended Belmont. My work had taken me away to Nigeria where I lived for twenty years or so but when I did come back for breaks I would always pop round and visit my friends, gradually also getting to know more of their community as Chiswick became more as we know it now. Eventually, when my sons left home and retirement approached I sought a place where I felt I could finally settle and Chiswick was it.

** In fact the original skinhead phenomena had nothing to with the later violent hooliganism. In our early days that trend was music based and was a code to reflect a love of Blue Beat or Ska music that was, given its Caribbean roots, multi-cultural. Locally, the epitome of style was ‘The Ivy’ shop in Richmond. Their shoes in particular were so expensive that my first pair were actually second-hand. They also sold Ben Sherman shirts and the ubiquitous ‘monkey jackets’. Doc Martens came a lot later. Around 1968 to 70 (using the respectability they were given by Enoch Powell’s 1968 ‘Rivers of Blood’ speech) the National Front high-jacked the fashion as a recruitment tool by getting violent football yobs to sell their newspaper ‘The Spearhead” outside the grounds on match days and racism became a key part of the Skinhead’s make up, which it not originally been.