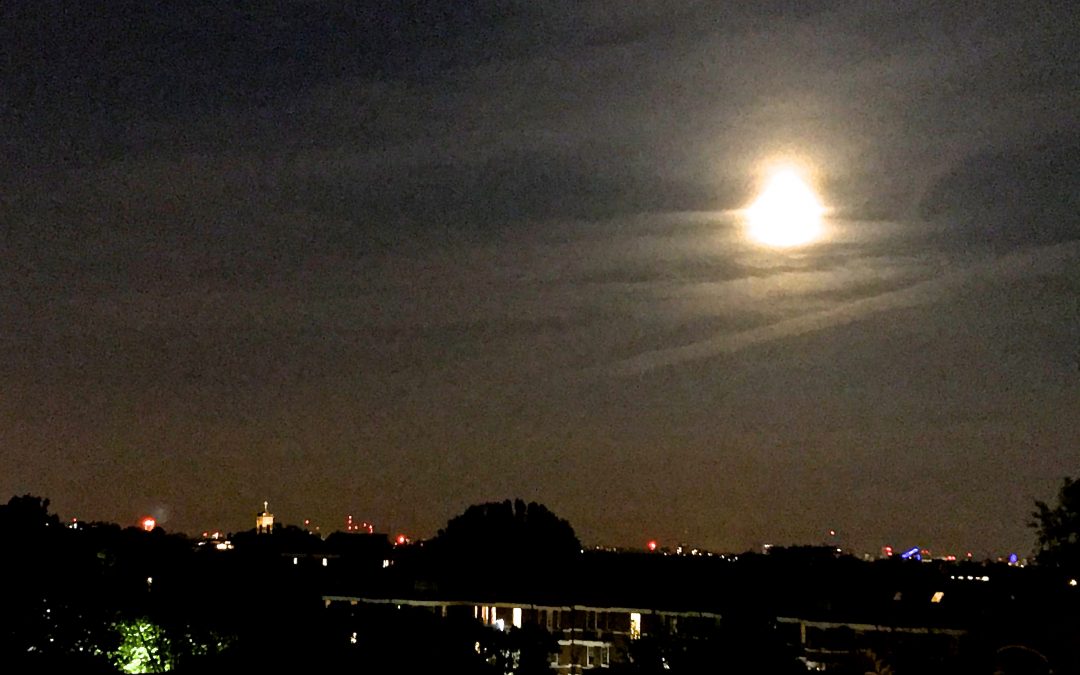 Ssshh, listen! What’s that sound? Who like me is enjoying the clarity of blackbirds and thrushes as you take your morning or evening exercise walk? Nature is enjoying the lock down. The absence of flights over Chiswick is a major joy too – is it just my imagination but does the air seem cleaner and fresher? Well certainly, the view from my balcony looking east towards the City suggests it is. The fact is, I can see over as far as Canary Wharf most days and that was very unusual before, the headline picture is of the full moon the other day and this is around early afternoon. Maybe one morning I will get up early enough to share the sunrise. * However, if big business pressurising government gets its way ‘return to normal’ will be just that. Society must take the chance we have been offered to keep these changes that have been for the better. I for one interpret ‘Stay Alert’ as my mantra for watching out for any signs (usually hidden away and not on front pages) that legislation that ignores our official Climate Emergency is being sneaked through. For many, it will be ‘Pollution as Normal’ if they get their way. Heathrow, unbelievably given what is happening, have asked for a review to have their right of appeal granted to enable them to continue to press for a third runway – I mean!

We also need to keep hold of improvements in the air we breathe in our local streets. Last Friday I posted a picture showing the Council’s temporary suspension of parking in front of just a few shops on Turnham Green Terrace where there was a perceived bottleneck on the pavement with queuing customers. This is in recognition of the problem down TGT where narrow pavements and small shops mean physical distancing is difficult. It is clear from the recent change of slogan without any really significant change in social guidelines that distancing is going to be with us for months to come. I called these parking restriction measures ‘pathetic’ for two reasons: i. this covers one 30-metre ‘hotspot’ when there are at least two others equally as dangerous, and ii. this is a lost opportunity to put in place something more meaningful. Having walked down the Terrace several times since the cones were put out it is clear, walking along that side of the road, that as soon as you reach the end of the wider strip and have to step back onto the pavement you are straight into another bottleneck. So, this just helps for a few paces and hardly even meets the ‘temporary’ or ‘emergency’ requirements that it is meant to cover.

A friend of mine suggested that I email a copy of my blog to Chiswick’s Council members and copy it to Mark Frost who as Assistant Director Transport, Parking & Environmental Strategy is the person responsible within the Council structure. I did send it to eight councillors as well as Mark and I can report that three replied, so thank you to Steve Curran, John Todd and Sam Hearn. As I suspected, what their comments had in common was there was indeed a great deal of debate on this issue and that parking for shoppers and delivery vans and the passage of the E3 bus were the major issues. Of course, the real barrier is the typical conservatism and fear of change as well as the usual barrage of NIMBYism that is inevitable in most places and particularly in Chiswick. Just consider how long it took for the new Cinema to be granted permission. (Screws up face and speaks in squeaky voice “woo no, we don’t want that kind of thing round here, we like it just as it is.”) However, my blog did bring out half a dozen emails, all in favour of something more effective and all suggesting a temporary ban on ALL parking down TGT for the duration. Most of them did mention the bus route as the longer-term problem. Yet, those issues are hardly unique to little Chiswick. The whole world is battling with the problem of traffic pollution and the withering up of inner city ‘high streets’ and local shops and some are finding solutions. While I would prefer a total pedestrianisation I can see how rerouting the E3 would be tricky but there are examples of what are often called ‘Living Streets’ where some traffic is allowed under restriction that would still allow for a massive widening of the pavement to allow for Al Fresco eating and drinking, market style stalls and the encouragement to leave your gas guzzling four by four at home.

What I found very helpful was Mark Frost’s reply and which I quote directly.

“In line with the government’s announcement yesterday, we’re certainly keen to carry on exploring additional measures that could improve the pedestrian environment and help facilitate social distancing in Chiswick, and indeed across the whole borough.

To that end we’ve started a borough wide consultation, which I’d really encourage you to contribute too.

“It’s clear there are a variety of views on the best way forward on this matter in different locations, even when we’re proposing changes be progressed as pilots or trials, so we’re really interested in evidencing strong local support if at all possible before we start changing things on the ground.”

If you click on the link and follow the trail it takes you to a map that details every individual temporary measure in the borough and gives us, the residents, the chance to make our views known. Please do use this link – which has not been very widely communicated – to make your views count. If we do not want to return to traffic filled High Street and the sound of coughing drowning out that birdsong please let us make our voices heard.

Finally, while on traffic. I give you “Dick Of The Week” – yes a name and shame picture. I have noticed some drivers have taken the reduction in traffic to mean they can ignore speed limits and parking restrictions. In particular, as drivers ‘pop’ into a shop (and the roads round the little Sainsbury’s opposite Chiswick Lane are a prime example) they park illegally right on the corner. This means everyone has to walk round their car, people with wheel chairs and pushchairs can not use the slope and it is a nightmare for other cars turning into and out of that side street. However, I have yet to see total idiocy and selfishness to beat this example. You can see from my picture the flashers were on. When I got there the guy was just disappearing into Barclays. I waited for about seven minutes and as he came out I was just too slow to take his photograph getting back into the car. In that time at least two cyclists, one with a child in a pannier, had to dismount and walk their bike round his car as it completely blocked the cycle lane. In addition, it is a major junction and when cars were waiting to turn right those in the left hand lane had to squeeze by carefully, which again put cyclists at risk. 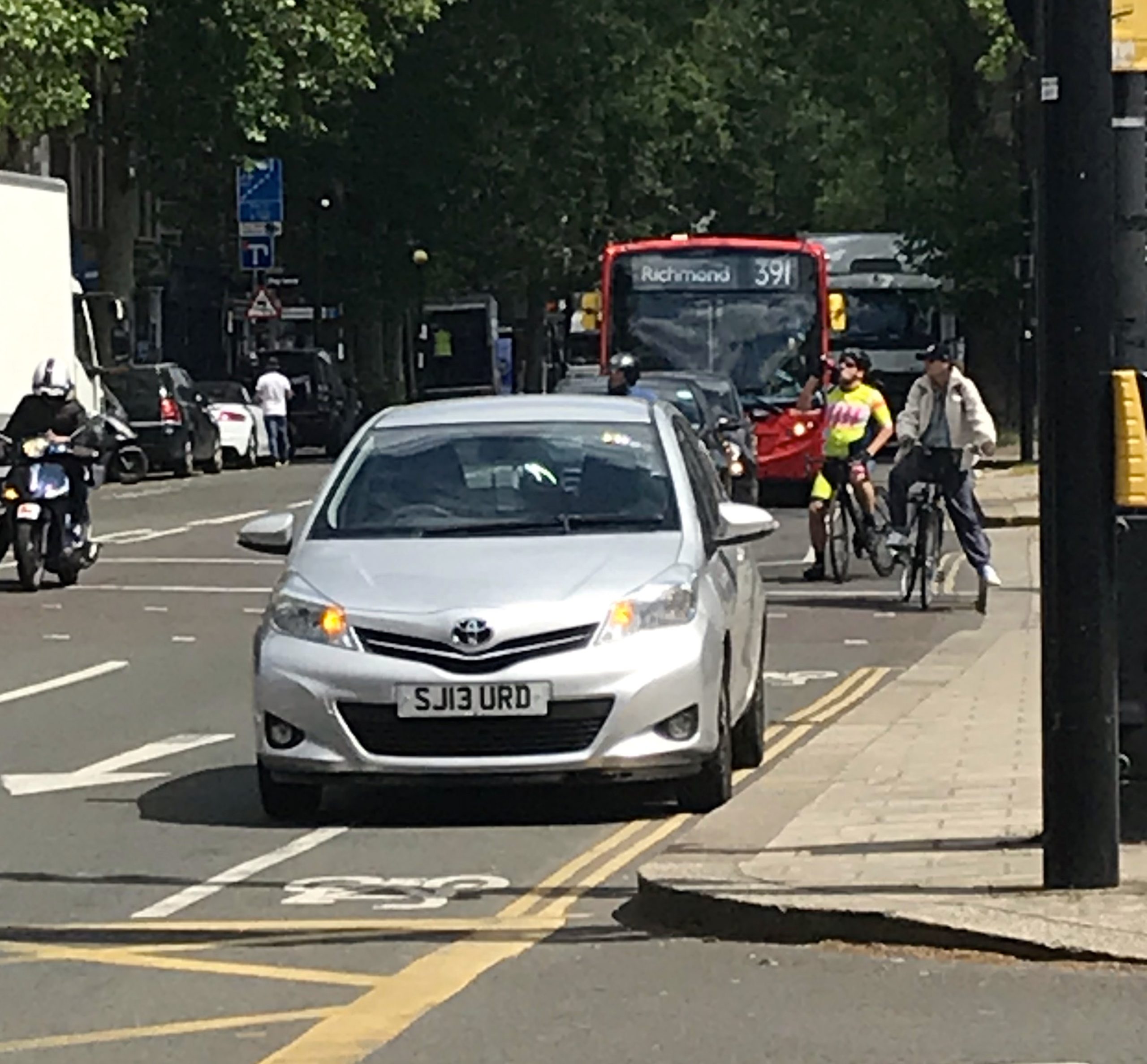 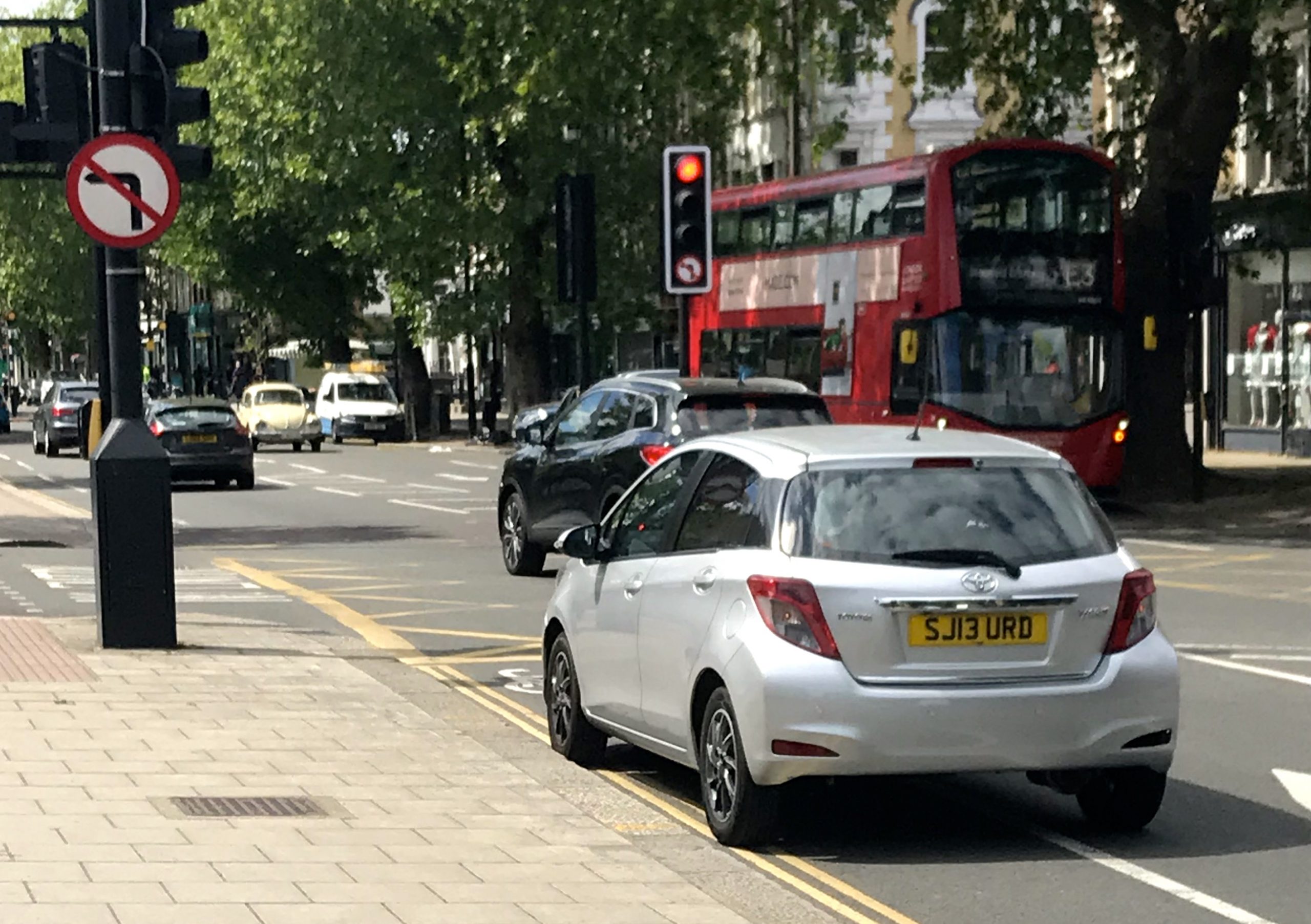 This blog was intended to be more of a diary of how I cope with the Covid-19 measures. Unfortunately, my last few Friday blogs have contained traffic rants. So here is some better news. One of my favourite Cafes in Chiswick, Parle Pantry, has re-opened for Take Aways and for simple grocery shopping with a focus on organic – their eggs come from their own chickens! I love their food, much of which is dairy, gluten or sugar free and now I can buy my coffee beans there. However, I really like to pop in for my ‘smile fix’. It really is the smileyest place I know and these days I need to see as many smiles as I can get. 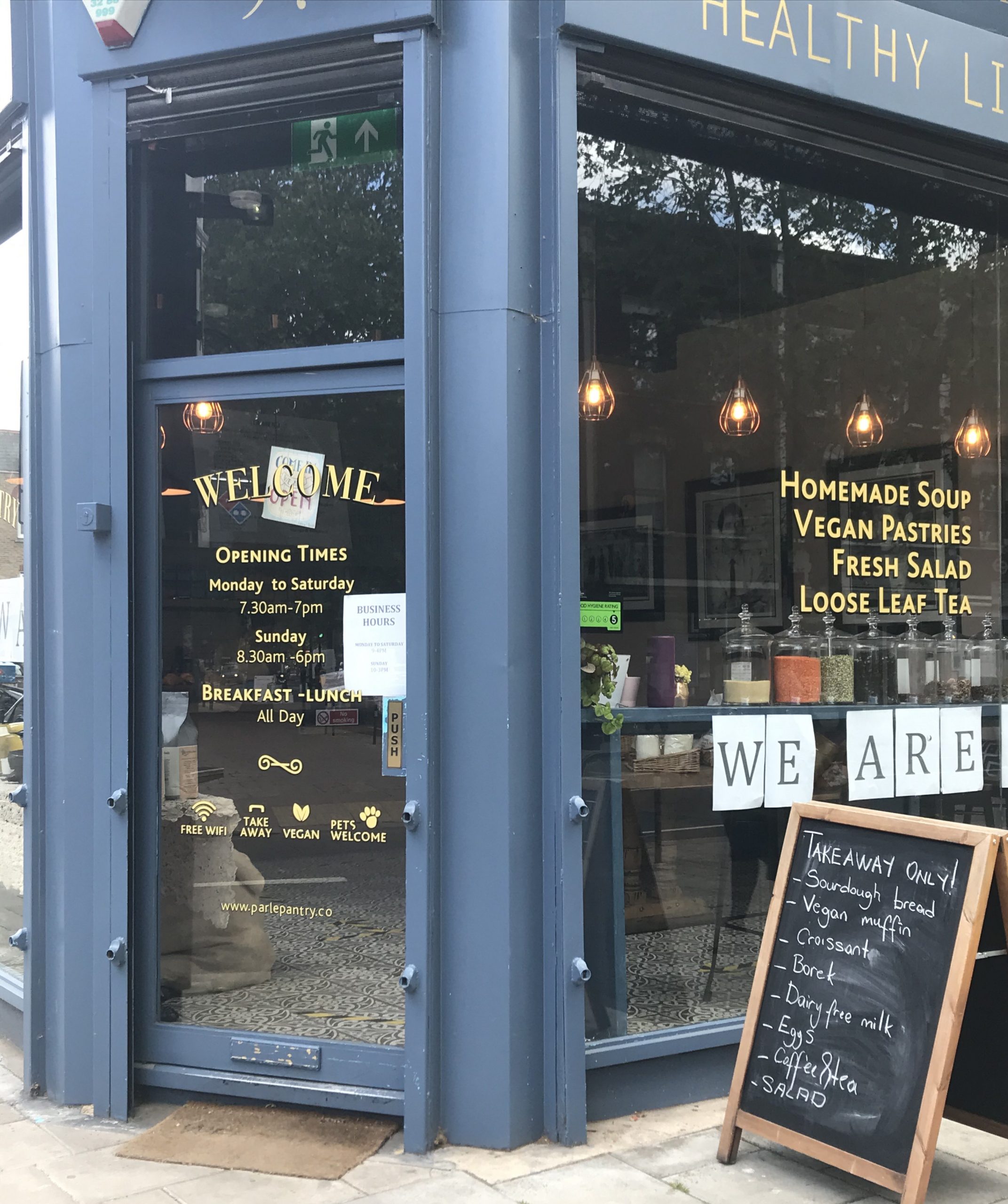 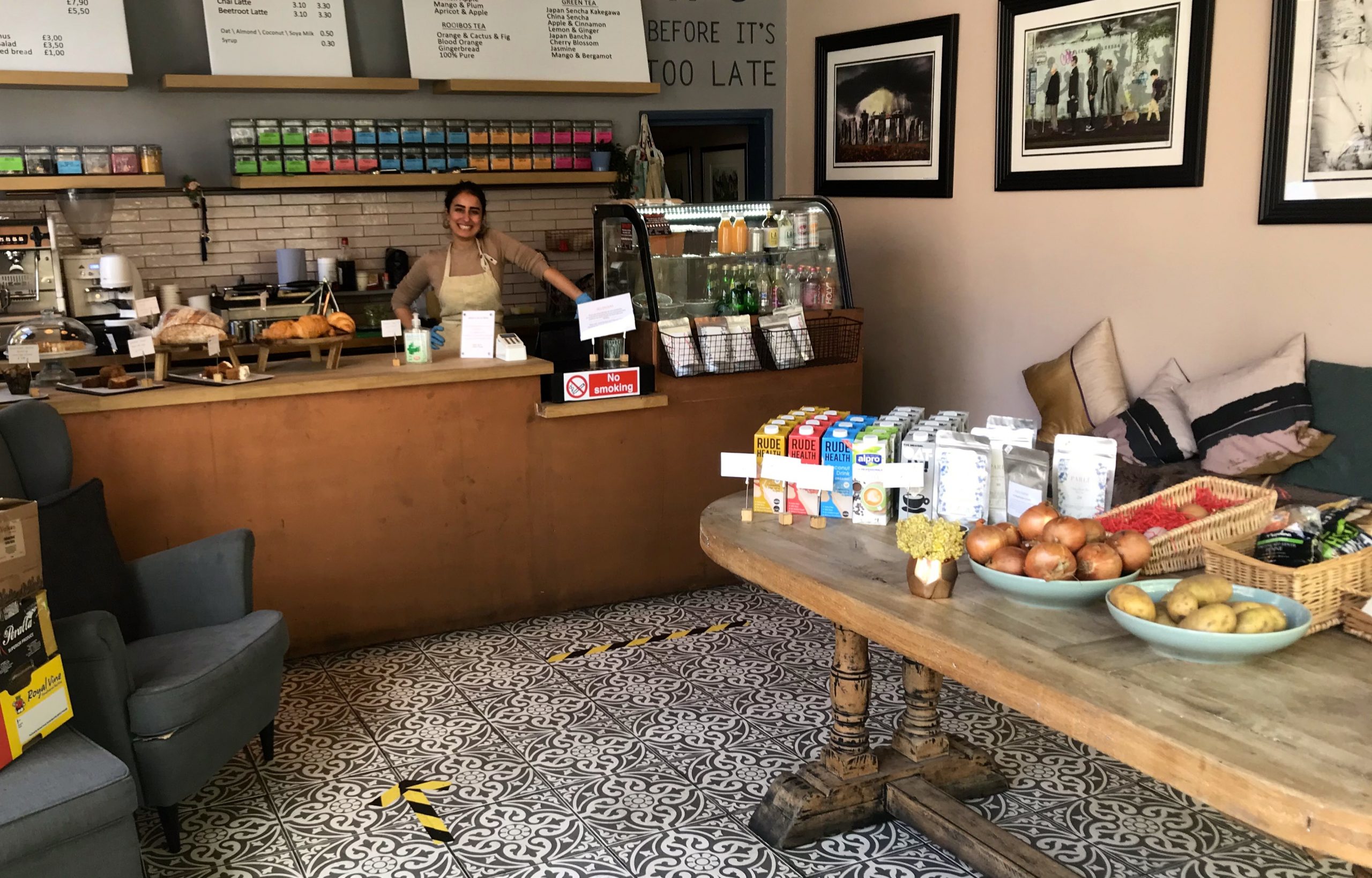 Now, this week’s Vinyl is a bit of cheat. ‘Five Bridges’ was a live recording by UK ‘prog-rock’ band ‘The Nice’ recorded not at California’s Fillmore or New York’s Carnegie Halls but at Croydon’s Fairfield Halls on 17th of October 1969. 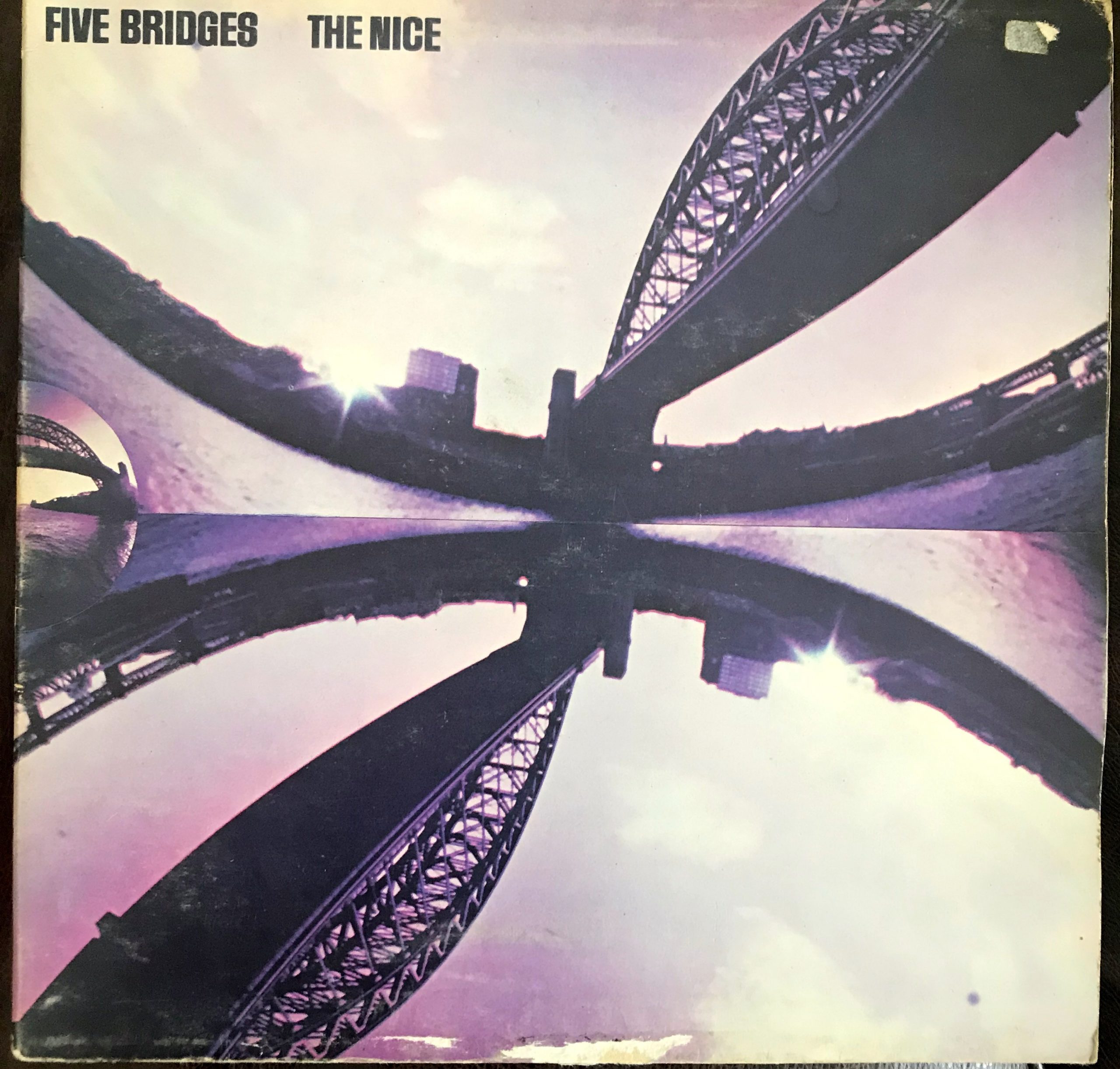 It was groundbreaking as it combined the three-piece ‘Nice’ with a full orchestra. The ‘Five Bridges Suite’ was composed by the brilliant Keith Emerson for a Newcastle Arts Festival. I definitely bought it in Hounslow as I can remember it was one of the albums I listened to in my bedroom when I should have been doing homework. In fact, I had a poster of P.P. Arnold on my wall and The Nice was originally formed to be her backing band. Now, here’s the extra link to Chiswick. The band’s original Guitarist, Davy O’List was actually born in Chiswick in 1948 though I am not sure where. He was a highly influential musician having also played in Roxy Music and even Jethro Tull. He is still playing either on his own or with his band ‘Attack’. He had a solo Album out in 2015 called ‘Second Thoughts’. I suspect he still lives fairly locally as he was interviewed at home for the BBC Documentary about Eel Pie Island ‘Rock and Roll Island’ that is now available on You Tube. Anyway, before O’List left Nice in 1968 he arranged their subversive version of Bernstein’s America’, originally from the musical “West Side Story”. Though not on this Vinyl it was released on the CD as a bonus track and is probably my favourite Nice performance.

If you wonder what they finish with, it is “America is pregnant with promise & anticipation but is murdered by the hand of the inevitable” – a bit ‘1968’ but remember it was a ‘year of revolution’ globally – maybe they foresaw the Orange glow over the horizon!

*   (Note from editor.) No Chance. None. Zero. The writer is officially a lazy bastard when it comes to mornings.