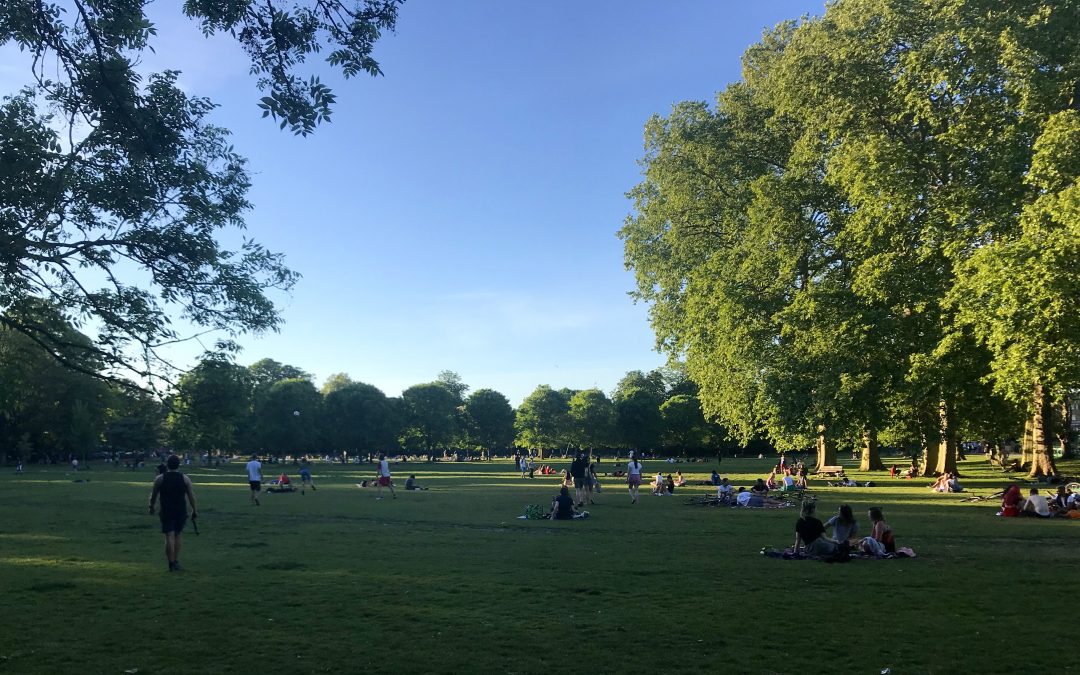 “The parks be the lungs of London”

It is clear from walking around Chiswick that more people are out and about and less pernickety about physical distancing. I have not watched the television news for reasons I have discussed in earlier blogs but I imagine they are full of clips of various public spaces full of people. There is a particular fear that the forecast of warm weather (if not quite as hot as this last week) combined with the Bank Holiday will see crowds on beaches, beauty spots and in parks. While I think everyone is going out more, anecdotally I sense a growing split between families with younger children and the over 50’s versus the group known as young adults when it comes to adherence to distancing. I still think the majority of, say, 20 to 35 year olds are being sensible but I am pretty sure there is quite a bit more pushing against the guidelines. Where families are more concerned about protecting children and the over 50’s either because they have some vulnerability them selves or have an older family member, the young group are less risk averse. I think too their group is particularly social and they are missing real social contact more. I am not personally against some more communal activity but it is about common sense. One of my regular walks is around Ravenscourt Park and over the last few weeks there have been changes in patterns of behaviour.

This was Wednesday evening around 7 pm. There tends to be a delineation between users with the afternoon pretty much mostly families and in the evening more young adults. One has to say the level of physical distancing was very high. Strictly, I suppose one has to see many of the mini-groups were larger than official guidelines but as we walked around it was easy to respect the two-metre gap. On the path some joggers were a bit less careful and the benches on the main path were still barricaded though not the ones on the smaller path, which seems a bit oddly inconsistent. Most people were showing common sense that is not always as evident along the High Road. It is clearly busier than I have ever seen it, apart from funfairs and bonfire nights etc. In the summer, the children’s play areas and the paddling pool are always chock-full on a sunny day but this is across the whole park.

I suspect this maybe the busiest time in this and probably many other of London’s parks’s histories. The late Victorian period and between the wars were boom times for the UK’s public spaces and gardens. The genteel London parks were full of the well-heeled and sophisticated middle classes ‘taking the air’ while local parks near working and lower middle class areas were widely utilised by the whole family. The northern part of Ravenscourt Park is still sometimes known as ‘Starch Green’ for the number of laundries sited around there. I can imagine how at any opportunities the women working there would have sat in the park for an escape from the damp and the steam. The west side, of course, had the hospital and the nurses’ home and again I am sure they utilised the space. In those periods there were organised activities for working men: sport, political discussion groups (this period saw the rise of the Labour Movement and working class activism) and religious meetings. This is clearly something to consider more at some point and I would be interested to hear people’s views. Interestingly, I have noticed fewer patrols of park wardens and community police since restrictions have eased. My memories of parks, play areas and paddling pools are of Inwood and Redlees Parks in Hounslow where there were always park wardens around to chase you out of the garden area or stop you climbing up trees. 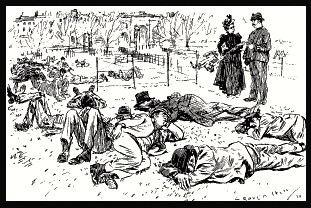 Lady: “Officer, what are these people doing here?” Policeman: “It’s Labour Day Ma’am”. Middle Class condescension in Victorian England towards use of Hyde Park by ‘the masses’.

The biggest fear really is that this burst of outdoor activity and relaxation of physical distancing will lead to a Second wave. Already China, North Korea and other South east Asian countries are seeing signs of resurgence. More and more analysis based on the history of previous pandemics, particularly the 1918-20 ‘flu episode, suggest this is a real risk and possible even of several peaks. It is possible too quick a relaxation now could result in a second wave and the onset of winter set off a third one. This does not seem to be in the mind of everyone at the moment and while I will be ready to visit a pub garden for a beer as soon as it is possible I will only go to those that create the environment for proper distancing. I am also going to stay in over the long weekend or if I do go out, only back streets and after dusk.

So, my various posting of photos of Vinyls has drawn different responses. Interestingly, it prompted a friend, John, to dig out a pile that had been given to him by his Mother-In-Law. His motivation is, I think, more about getting rid of them but he did share them. These triggered some memories: not of my own taste but of my parents’ generation. There are several here that bring back memories of my childhood. Glenn Miller was one of my Mother’s favourites though my Father was not a fan. If you ever doubt how popular Miller was, you should know that he released 236 singles on the ten-inch shellac format between 1938 and his death in 1944 and 23 of them were No.1 in the US. In 1942 he and his band ‘joined up’ to become the Glenn Miller American Air Force Band or AAF as it was known. They were stationed in the UK for the 1942/44 period to enable them to entertain Allied troops in the UK and the European theatre of operations – initially based in the BBC Studios in Sloane Court they relocated to Bedford to avoid the V-1 Flying bomb campaign. That was just as well as soon after a V-1 landed on that building and killed 70 people. He did play concerts in the UK but they were mostly at military bases and American airfields. Until in December 1944 he boarded a plane to visit American troops in Paris and was never seen again. I am not sure if Mum ever saw him as she would have still been a young teenager but she would have heard him regularly on the BBC. As soon as we had a record player in the mid ‘60’s Glenn Miller was high up on her play list. 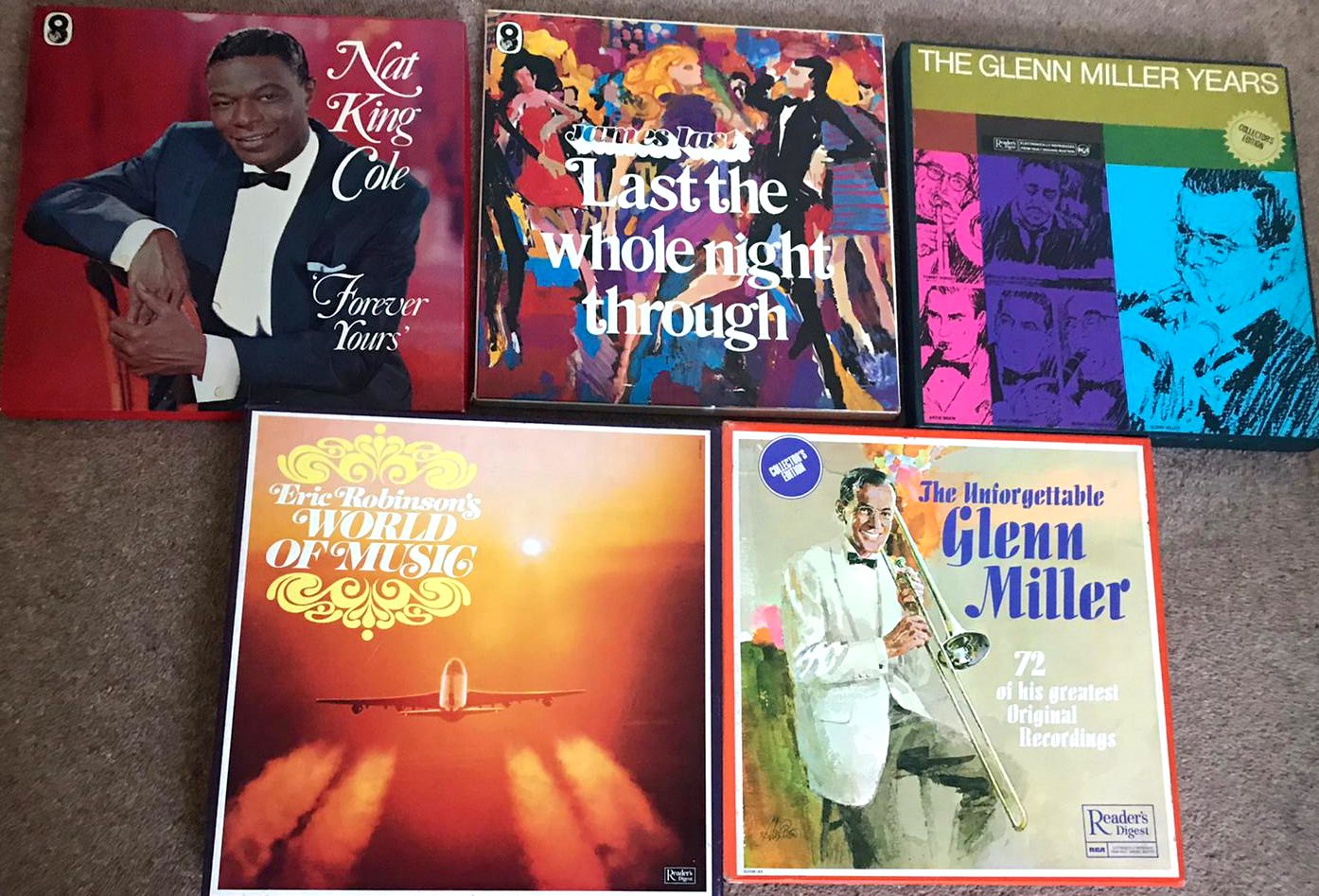 The other name that springs to mind is one that I can more easily appreciate. I actually have one or two Nat King Cole songs in my playlists and he was clearly an influence on later jazz musicians such as Oscar Peterson. Marvin Gaye too cited him as an influence and you can see, and hear, why. Gregory Porter is one of the several that have recorded tributes. In his case a whole album. Interestingly, Paul McCartney stated that Cole’s song ‘Answer Me’ influenced ‘Yesterday’ to the extent there were questions asked about plagiarism. There are hints of Sam Cooke to my ear. Definitely, his dulcet tones and smooth delivery set him apart. He was also urbane and stylish and it is remarkable how many of these covers feature men in dinner jackets, suits and bow ties. This was the period of the Rat Pack when the men that were seen as role models looked smooth and gentile but were often misogynist and treated women like objects. 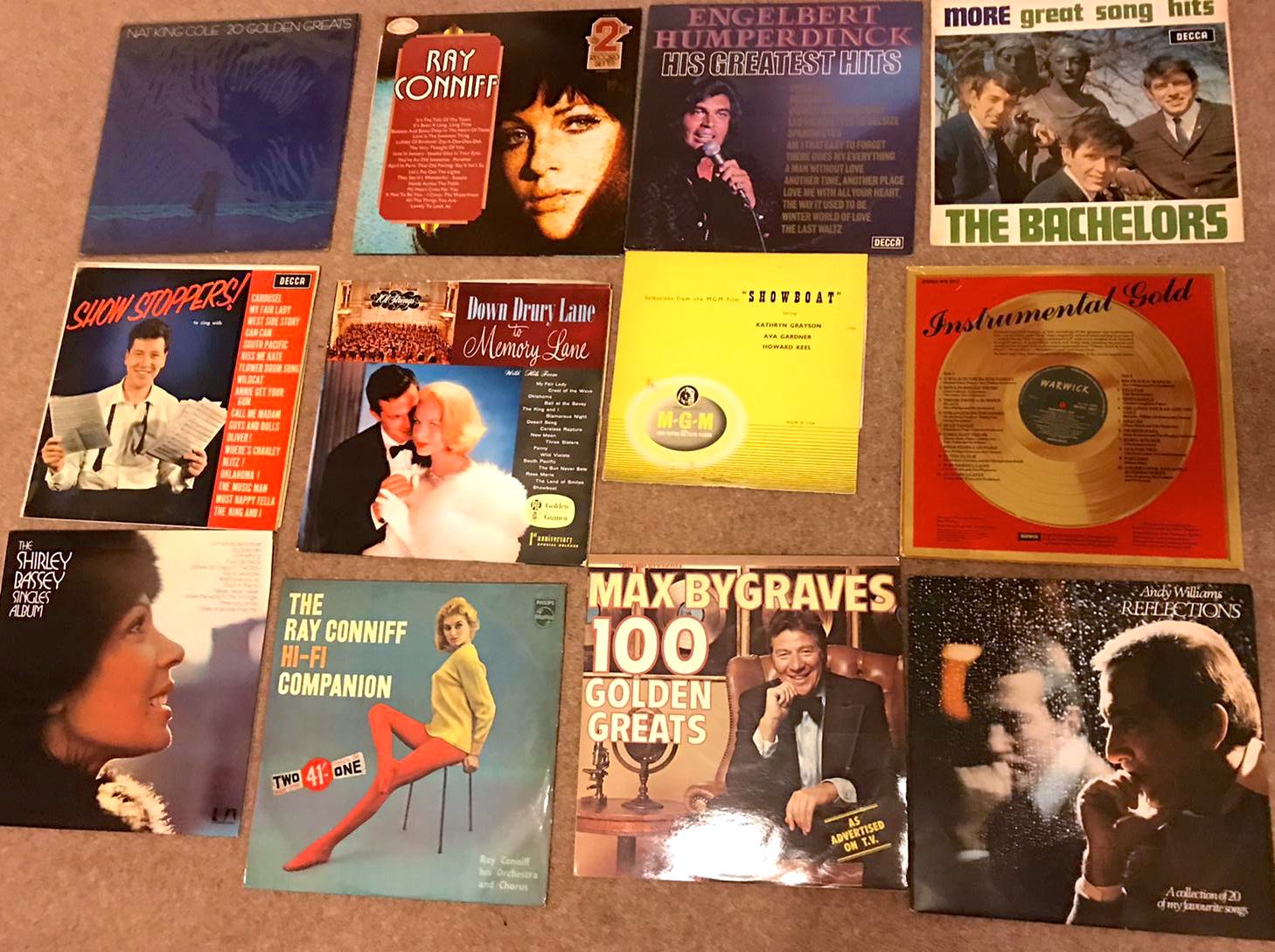 One woman who would not tolerate being treated as an object was Shirley Bassey. Her album would be in competition with Nat King Cole for the record I was most likely to keep in my own collection. Bassey grew up in Cardiff’s Tiger Bay area which was a notorious dockland slum area after the war. Many African and Caribbean sailors who kept the British merchant fleets going during the war were effectively dumped onto the docks they disembarked in when demand for their labour plummeted post-war and seamen’s unions fought for race bars to maintain their white members’ employment. Targeted race related violence was a fact of life in Liverpool, Bristol and Cardiff right up until the 60’s. (Actually, speak to BAME people in those cities and they will tell you that it has not been completely eradicated now). Bassey’s father was originally from the Calabar area of eastern Nigeria and his real name was possibly Akun Apauso – though Bassey is a common enough name in Cross River and Akwa Ibom States. Bassey herself says that race was not an issue for her but for her single mother and her siblings the big issue was a four-letter word – food. A childhood of poverty, she was born in 1947, made her an indomitable woman. Of course, in the entertainment industry a strong woman attracts other epithets: diva, difficult and demanding. If refusing to be stigmatised for being mixed race or belittled for being a woman who insisted on fair treatment I guess then that was true. The stories are pretty legion but there is no denying it was her personality that came through from her strong voice and direct delivery that made her one of the most popular artists on the ‘60’s and ‘70’s Cabaret circuit. In 1963 she actually did an eight-week residency at the flagship Talk of the Town. In her ‘80’s she is still occasionally performing.  I actually love her voice but find the over produced big orchestra productions of many of her performances tend to mean she over did the dramatic booming (‘Hey Big Spender’ is the classic).  I would have loved to have heard her sing more blues and jazz in a small setting.  However, this clip shows her ability to be sensitive – though her eyes are still as intense and dramatic as her personality shines through https://www.youtube.com/watch?v=pwGUqx6vngY

Of the others there are not many I would give any time to. I actually dislike Max Bygraves, probably because he was always on television when I was a kid and I always thought he was pretty slimy to be honest. Humperdinck’s “Please Release Me” was a massive hit in 1967 but I could never understand who would pay good money for it until I found out he had a massive following of middle aged women who called themselves “Humperdinckers”! I am sure some of them would have played at the Hammersmith Odeon, Shepherds Bush Empire and other local venues. Certainly Max Bygraves did play at the Chiswick Empire before that was demolished in 1959.

Anyway, the sun is shining. I have found out that Twickenham Brewery does deliveries of ten and five litre poly-pins of cask beer. If I can’t get to a pub garden somewhere I may as well create one on my patio. Excuse me for not wearing a bow tie or listening to Max.