No one can tell which lizard has stomach ache

because they all lay on their belly.

I wait patiently behind my M&S shopping trolley as the lady with her surgical mask hanging limply round her neck selects her preferred choice of charcuterie from the chiller. She looks up at me and mouths ‘sorry’ and I smile wanly and mutter ‘don’t worry, no hurry’. Inside me the little man screams ‘for fuck’s sake woman, get a move on. We haven’t got all day’ when actually, on the contrary we do have just that – all day. What else am I going to do? I continue to display outward signs of chilledness while inside I am struggling to push down that little man. She is struggling to decide between sliced lean beef, sliced Italian Parma ham and sliced herby chicken – it really is a first world problem isn’t it? I could squeeze past her, trolley to trolley, but we would definitely be within a couple of feet of each other and I am unquestionably twitchy about doing that. The little man is winning – ‘get a fucking move on you……’ but then she grabs one of each, drops them carefully alongside the ready washed carrot sticks and pushes on. The little man’s voice subsides and I too push on, making a little detour down the Ready Meals aisle to avoid someone coming at me from dips and party selections. Eventually, I make the check out queue and take my few items out of the giant trolley; several supermarkets having hidden the baskets away on the basis that the trolleys help encourage social distancing. Things that I have not been able to buy in my usual small independent greengrocers etc. oat milk, two whole meal rolls, a tub of Greek yoghourt and, I am so ashamed to admit this, a “M&S Best Ever” steak pie. So much for my healthy eating regime!

Twenty minutes later I am back at home making a cafeteria coffee as part of my management of daily ‘treats’, when I take a scroll through the two million videos I have been sent via Whatsapp, Facebook, Insta, Messenger – all apparently in the last 20 minutes. Several questions spring to mind including, ‘where do these people get them’, ‘do they actually do anything else with their time’ and ‘why the fuck am I watching them’? In fact, why, especially at my age, am I even on all these social media platforms? However, have you noticed there are some genuine patterns? There are only one or two people who always seem to send the most hilarious/interesting things, there are some people who always send stuff you have already received several times about four days after everyone else, there are some people who are normally very quiet who are suddenly sending out the most horrendously inappropriate stuff, and there are thousands of people out there without any personal filters making absolute shite. And, I keep fucking watching them!

Hmmm, time for a little quiet reflection. I am reasonably comfortable, not bored at all (thanks to this and my old photo cataloguing project) and haven’t had any ‘down’ day for two or thee weeks but can I detect some negative personal signs. I am definitely a bit twitchier when I am out doing my shopping; well I certainly was in M&S. In the smaller shops the people management and distancing seems to be easier and shoppers more patient but there is more of an edge in the supermarkets. I find myself getting much more irritated at people who walk too close. I note that some queues outside shops are quite disciplined but there are others that are poor. Those waiting outside Fudges Cycle shop are particularly inconsiderate and line up on both sides of the pavement forcing you either onto the road or to run the ‘breathing gauntlet’. Cyclists are becoming one of the more annoying and inconsiderate of the urban exercise species. I am making less calls to check up on people and its more of an effort when I do – though to be fair once I make the effort I enjoy the calls and am glad I have. I am drinking more. To be fair to myself not horrendously but its two beers instead of one or, if I open a bottle of wine, it lasts two days instead of three. Fuck it, why not? Oh, and I am actually saying ‘fuck’ more often and language is certainly one of my little warning signs to watch out for. Hmm, will keep an eye on those signs. It is important that we do ‘sanity checks’ in these times if we are on our own and if we are sharing a space to stay considerate to those about us.   For me, I always have my writing and my music. Talking of which…….. 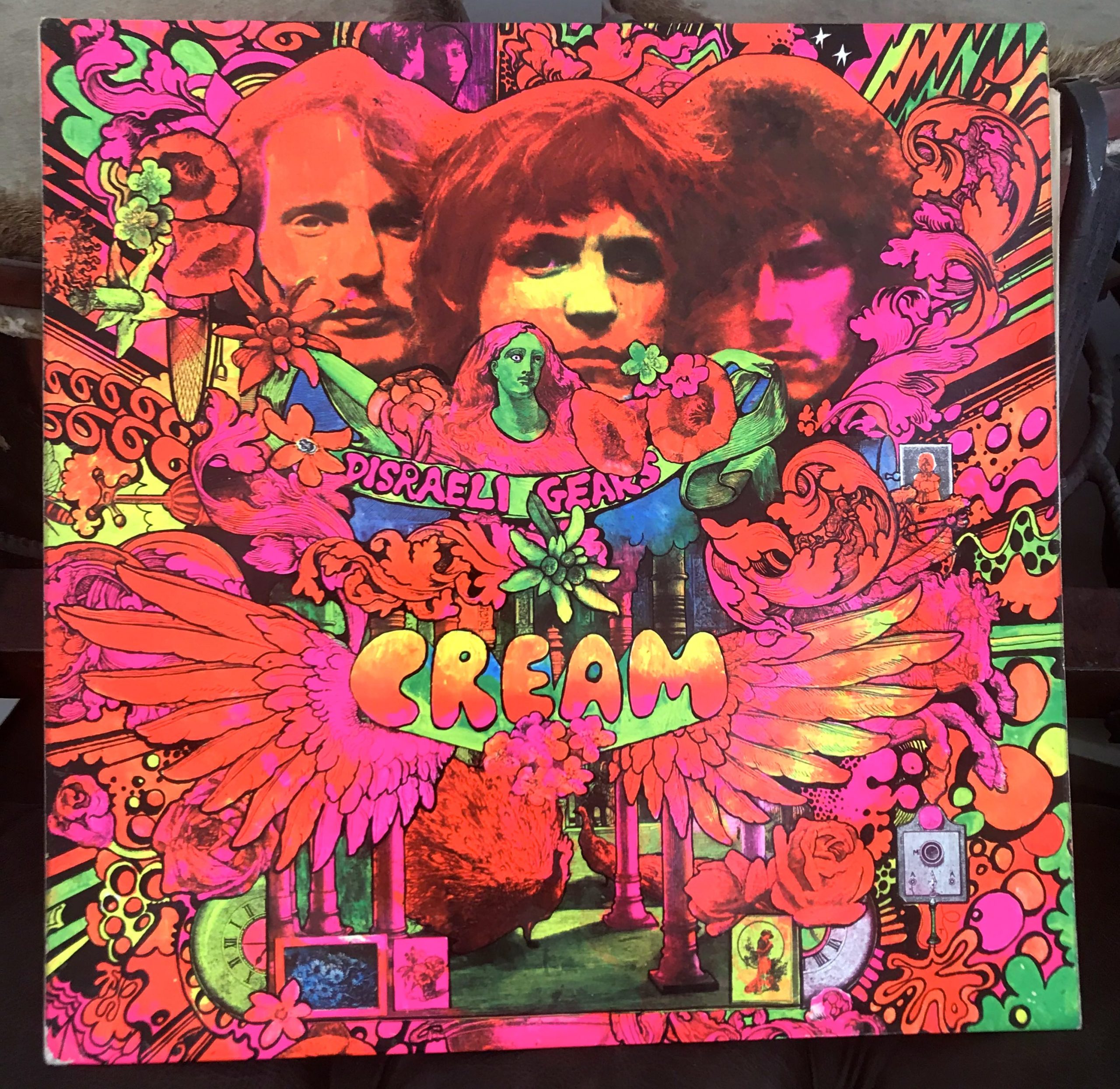 Disraeli Gears was originally released in 1967 and contained two of Cream’s most successful singles, ‘Strange Brew’ and ‘Sunshine Of Your Love’. Amazingly it took less than four days to record. My original Mono version must have been bought a couple of years after its release as it still has the sticker thirty two shillings and eight pence, which I think, if my memory serves me well, would be one pound, sixty three pence in today’s money. The actual record has a big A in marker pen on the label that suggests to me that my little sister Anne must have taken it to a party at some time. I saw most of the major rock/blues bands of the day but I am sad to say Cream escaped me though I certainly have a few dodgy memories with this album as the sound track. There is also a Nigerian connection, as there always is, through Ginger Baker. Apparently, Ginger had met Fela Kuti in London’s Flamingo Club sometime in the ‘60’s and in 1970 had visited Ghana where he became fascinated by West African rhythms. In 1971, suffering from physical and mental issues he decided to get away by driving down through Africa in his Land Rover and setting up his own recording studio. Batakota (or ARC) Studios eventually commenced operation in January 1973 and Paul McCartney’s ‘Wings’ recorded much of ‘Band on the Run’ there. A combination of bad luck, Baker’s preference for rally driving or playing Polo and commercial hostility from EMI meant it was short-lived. However, during his trip Ginger did play with Fela and in 1971 they recorded the famous ‘LIVE’ album together. They obviously kept in touch because Ginger and Tony Allen also played a legendary drum duet at the Berlin Jazz Festival in 1978. 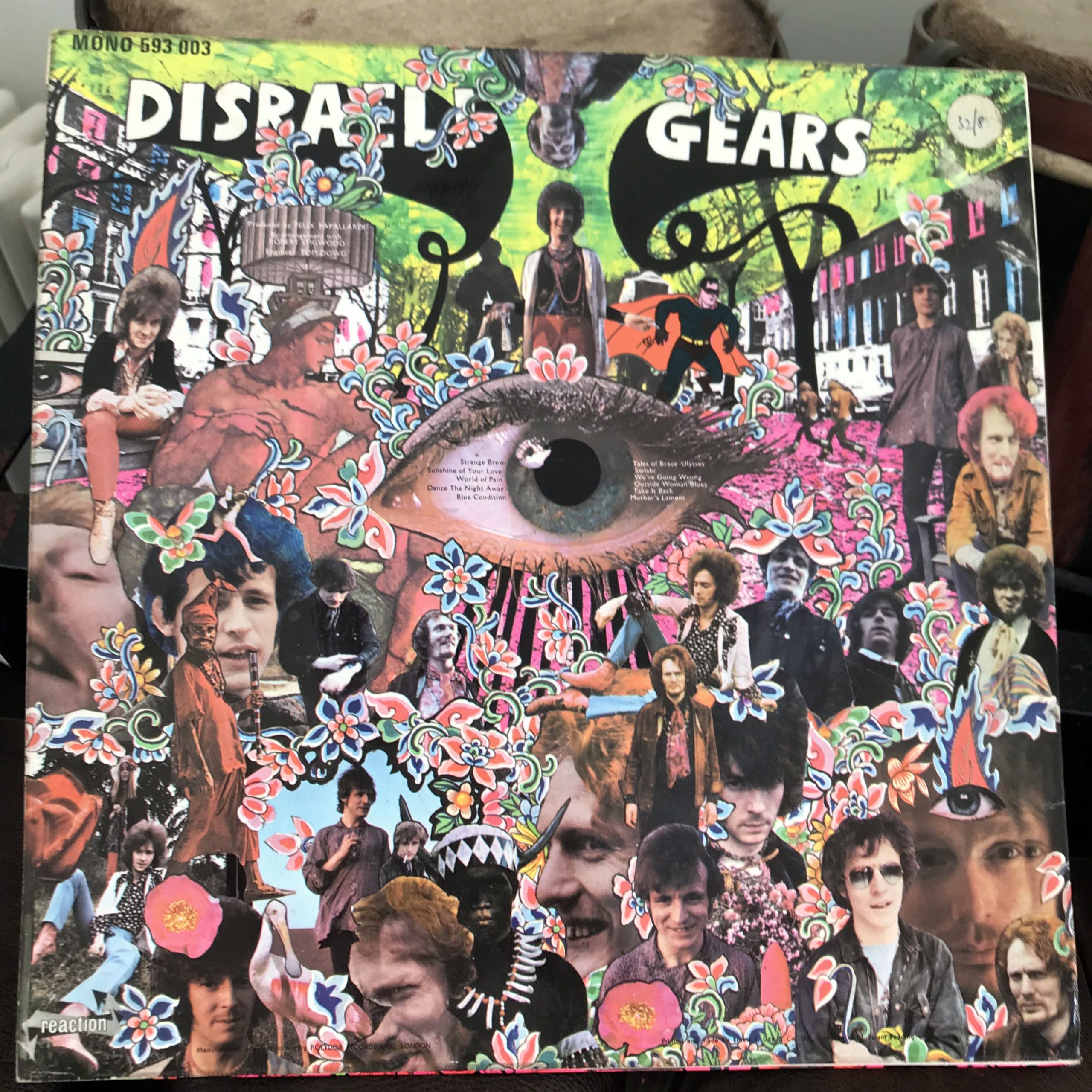 By the way, just to point out that when photographing these covers, I lean them on the back of my settee against some drums that you can just see in the above picture of the back cover.  These are, in fact, from Egypt ’70 and were given to me by Seun Kuti in Lagos a few years ago.  I also also add a close up of the original price tag. 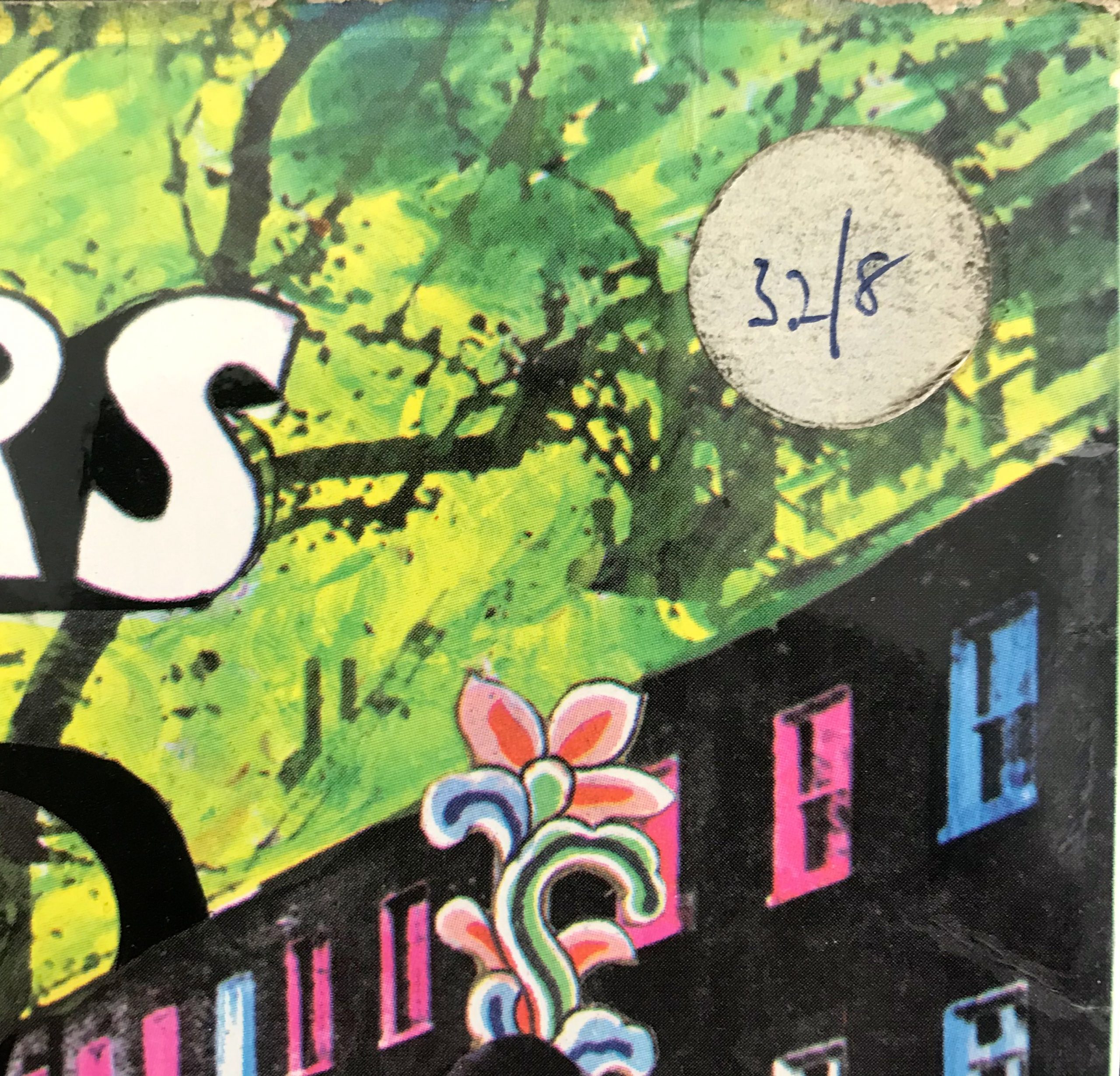 Of all the tracks, there is one particular song that friends of mine of old will always associate me with. ‘A Mother’s Lament’ is credited as ‘Traditional, Arr. Cream’ on the label. However, it was actually published with other Music Hall songs by the publishers ‘Frances, Day and Hunter’, some time between 1900 and 1910. I leave you with it and a shout out to my old mate Chris Johnson as for many years we used to sing it at midnight between our two birthdays on 13th and 14th of October (Fela’s was the 15th by the way).

A mother was washing her baby one night
The youngest of ten and a delicate mite
The mother was poor, and the baby was thin
Twas naught but an skellington covered with skin
The mother turned ’round for a soap off the rack
She was only a moment, but a-when she turned back
Her baby had gone and in anguish she cried
“Oh, where ‘as my baby gone?” The angels replied
“Oh, your baby has gone down the plug-‘ole
Oh, your baby has gone down the plug
The poor little thing was so skinny and thin
He should ‘ave been washed in a jug, in a jug
Your baby is perfectly happy
He won’t need a bath anymore
He’s a-muckin’ about with the angels above
Not lost, but gone before”

Stay cool – and don’t be the Lizard with belly ache.