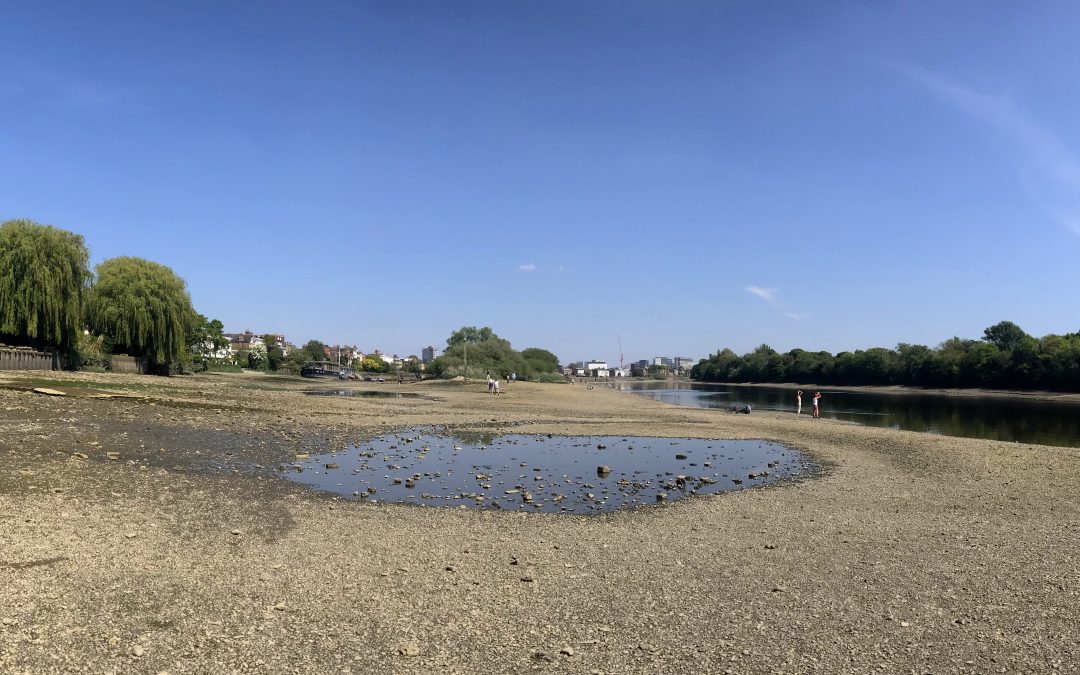 “Oh, Eeyore, you are wet!” said Piglet, feeling him.
Eeyore shook himself, and asked somebody to explain to Piglet what happened when you had been inside a river for quite a long time.”

As the weather forecast for this week suggests the sunny spell is coming to an end and it was son George’s birthday I decided to put aside my usual lock down ‘stay at home at weekends’ policy and we went for a walk. We crossed under the Great West Road by the brewery and strolled down to Chiswick Eyot only to be taken aback by one of the lowest tides I have seen. It was just so tempting so we went down the slipway and walked along the foreshore. We saw looking down the Mall that the path was ‘chocker’ with cyclist and joggers * as well as families but down on the ‘beach’ (I am not quite sure what you would call it) there were a few ramblers and even a couple of cyclists with mountain style bikes but generally it was perfect for a socially appropriate stroll.

A Panoramic picture with the North bank by Chiswick Mall, The Eyot in the centre and the main stream and the Surrey bank to the right.

At this time of year it is important to avoid the Eyot itself as the swans are nesting. Actually, it is best to avoid climbing on to the island at all as its eco-system is fragile and it is best left to groups like Thames21 and Old Chiswick Protection Society ** who are apparently in a battle against invasive species such as Chinese Mitten Crabs and Himalayan Balsam both of which damage the banks and allow erosion. At certain time of the year both those societies call for volunteers to help collect the plastic litter that has accumulated. Details are on the sites below. 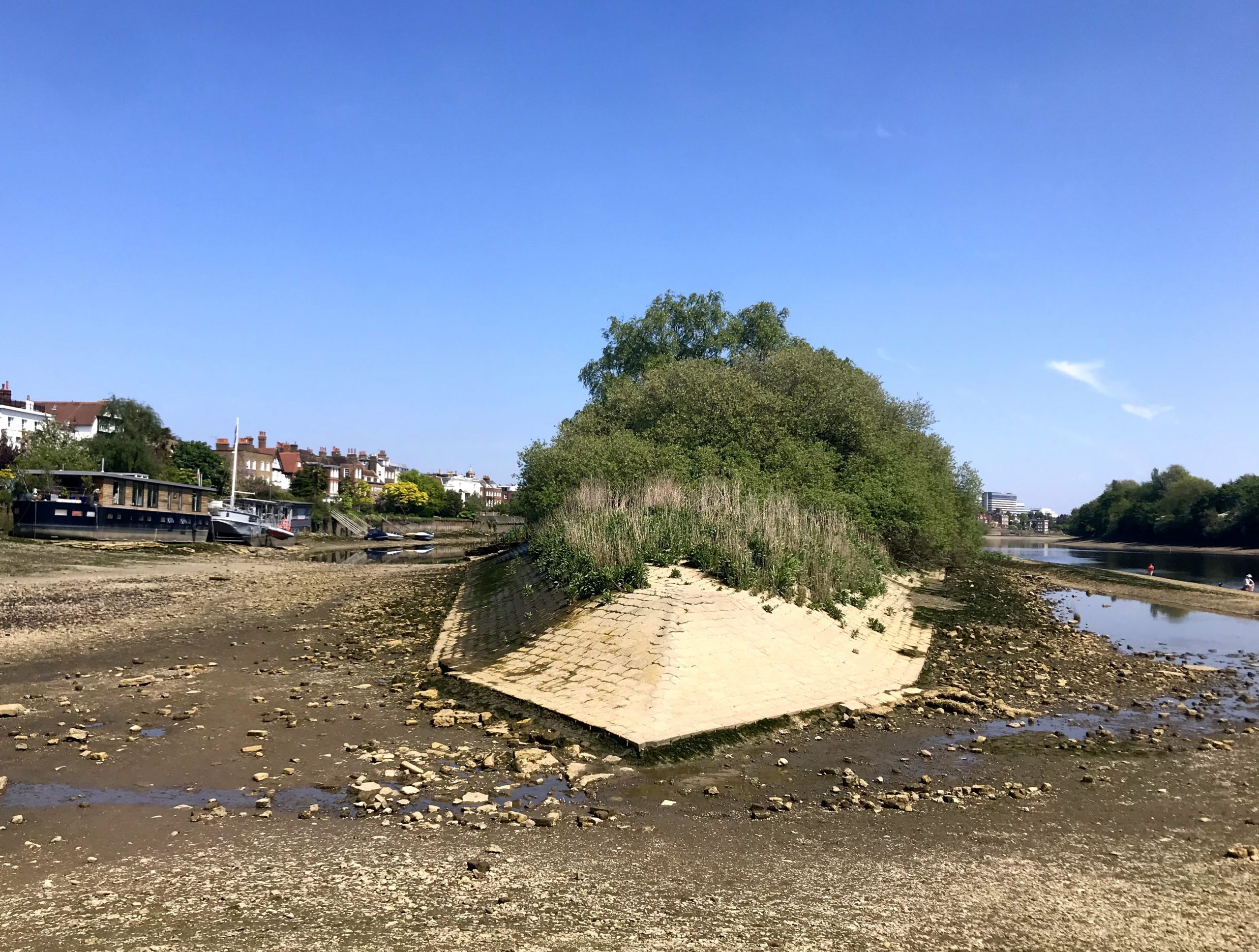 A closer view of the eastern point of the Eyot unusually high and dry.

Given this Blog is my ‘lock-down activity’ I have plenty of opportunity for researching or at least fact checking the various subject matters, a pastime that can be time consuming but quite addictive. So, apparently Chiswick Eyot is apparently one of only 43 unbridged tidal islands that is walkable from mainland Great Britain! Many were seen as holy land and had churches on them and indeed our Eyot was ecclesiastical land until 1934 and was historically linked to St Nicholas Church nearby. It was used for willow and other plants for the making of baskets and is actually the last remaining withy bed that was continuously cultivated on the Thames since at least the early eighteenth century. Withies or willow stems are still cut on the Eyot and once a year volunteers help collect them. Now they are used to help shore up the banks to prevent erosion and are no longer used commercially. Once again, while fascinating to know a little extra history, this is just a reminder that the Eyot is a designated Nature Reserve and NOT a place to walk on. 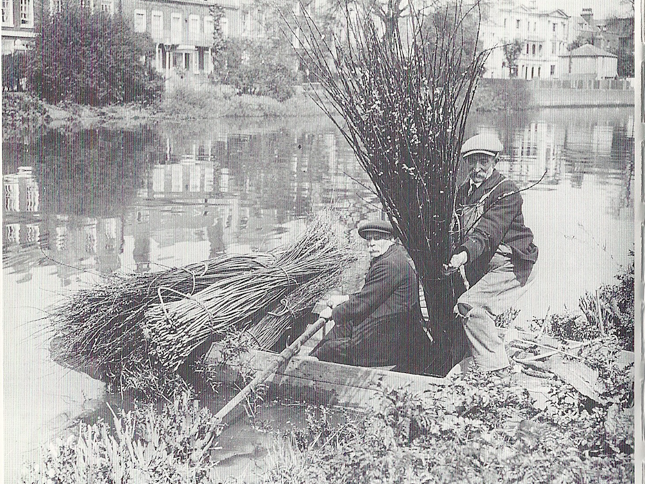 Withy Cutters on Chiswick Eyot in 1927. See footnotes for OCPS references and credit.

So, having pondered the Eyot from an angle I had never before witnessed we strolled east until, eventually, after I had stuck my foot in a gooey mud hole, we scrambled up the bank by Dukes Meadows bandstand. From there it was just a short walk with a brief stop to wipe Thames muck from my shoes, to Chiswick Park, thankfully still open and full of, it should be noted, sensibly socially distancing Chiswick folk. 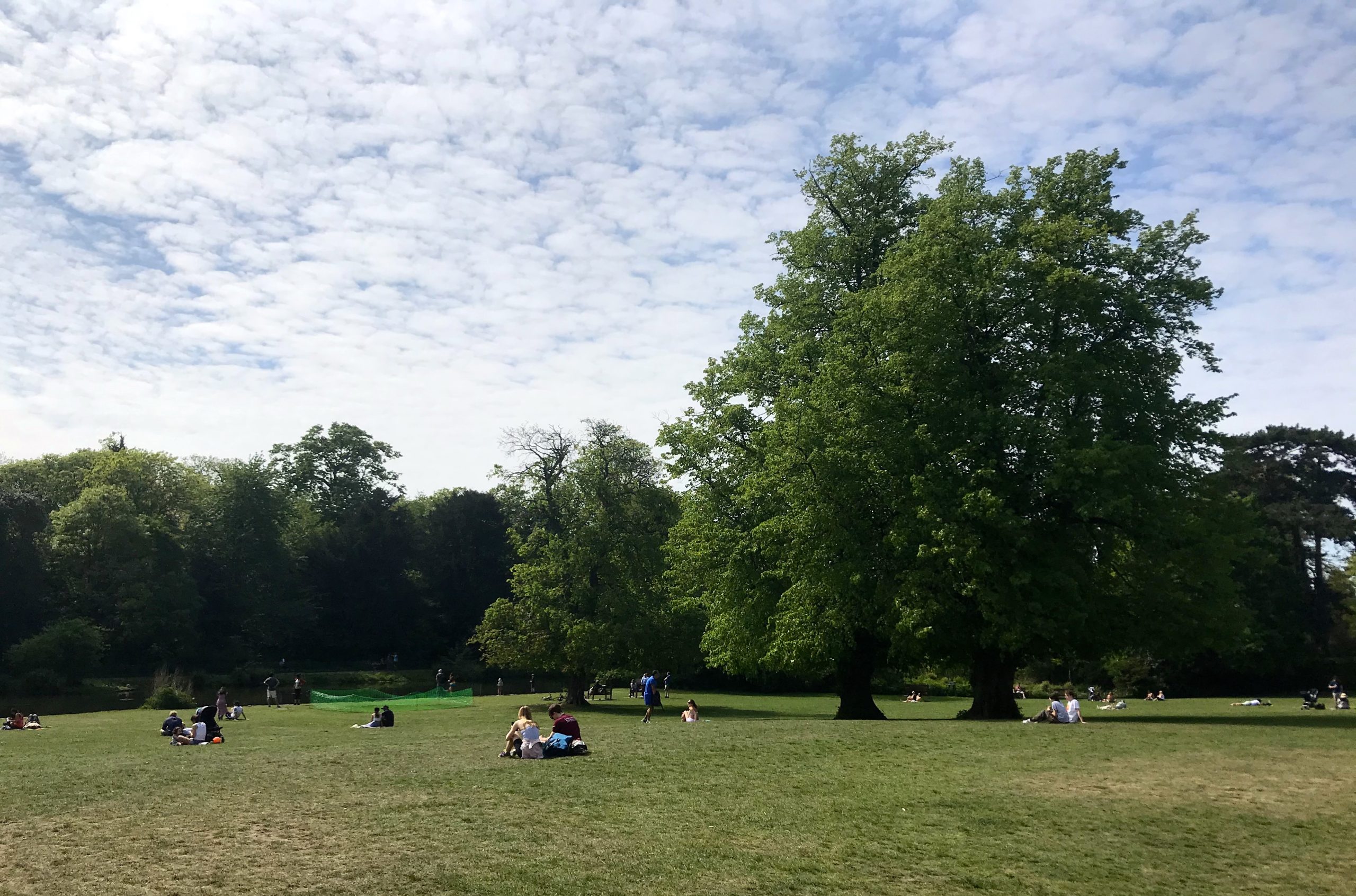 Now, I have a challenge. I can think of plenty of songs and indeed albums that could provide today’s musical link but they have to come from my Vinyl collection. I used to have Pentangle’s ‘Basket of Light’ that could have linked with the withy references but that one flew off at some point in the past. George and I recently watched a documentary about Rosetta Tharp that included her song ‘Down By The Riverside’ but I don’t have that. So, the nearest I can come up with is…….

The trees hold their arms out to catch what life gives
But the people try to snatch all there is
They can have all I own. I don’t need anything,
I’ll just follow the river, and see what it brings. 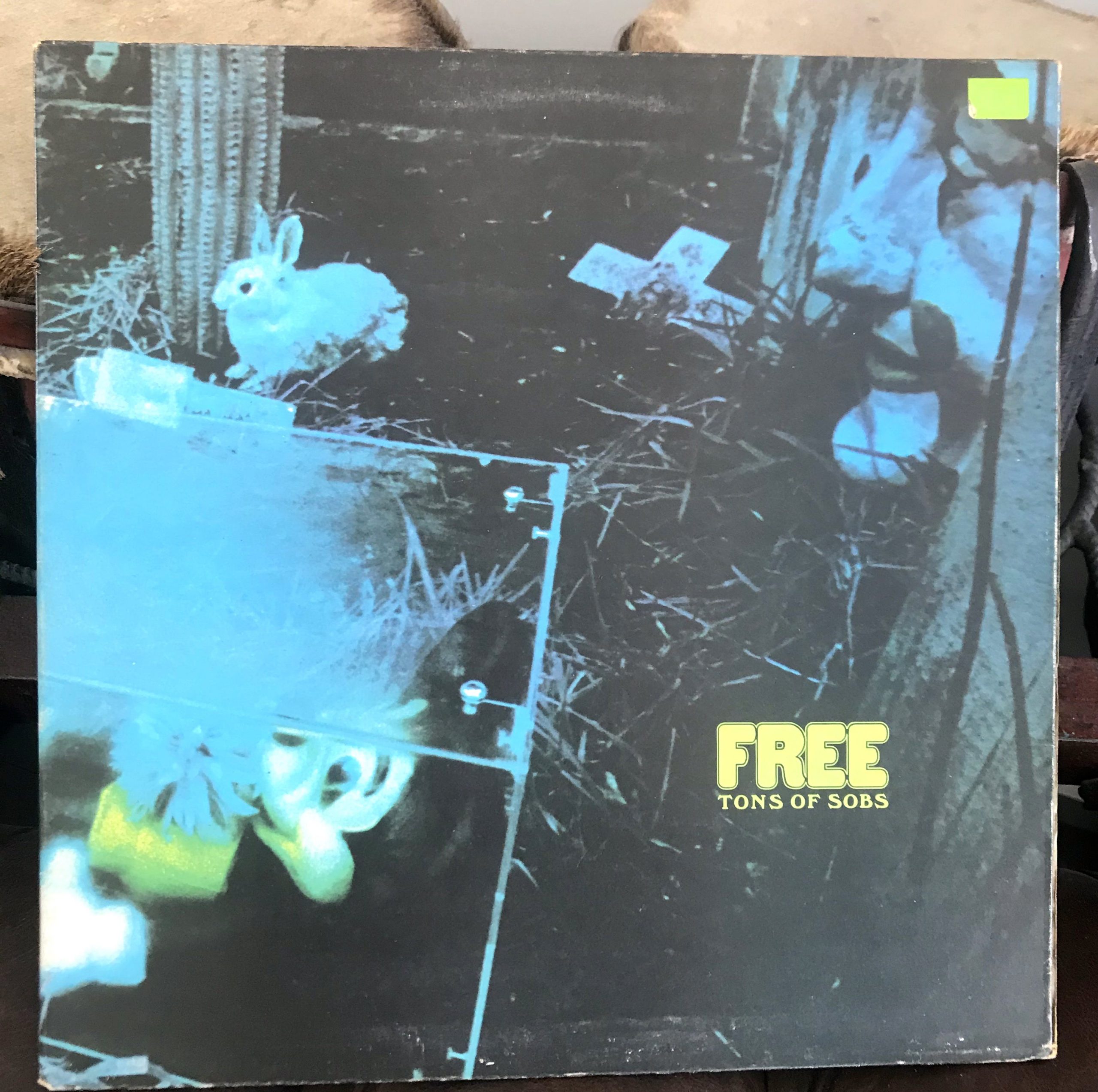 This was released in 1969 and I am amazed to read that it hardly registered in the charts as I bought it at the time and could not stop playing it. All the band members were under twenty years old when it came out and bassist Andy Fraser was only 16. For me this is their best music as from the 1970 chart hit ‘All Right Now’ they became too commercial and lost their edge. The only later song that has any signs of the early rigour is the title song from the ‘Fire And Water’ L.P. Their real strength for me was the way the individual musicians all had a very specific style that managed to complement the others. Drummer Simon Kirk was one of the least complicated drummers ever but just hit the drums bloody hard. That provided a foundation for Fraser who added a more fluid rolling bass line combining into a driving rhythm that allowed Paul Kossof’s guitar to range free. Paul Rodgers was the one to move on to bigger things with ‘Bad Company’ and eventually the post mercury ‘Queen’ but for me it was Kossof’s guitar that lifted the band into the greats. His skills were so rated that he has been ranked as 51st in “Rolling Stone” Magazine’s 100 best guitarists. He was documented as being a heavy drug user, which led to him not maintaining his high standards and was a contributing factor to the bands demise and his early death in 1976 at the age of 25. There is a moving tribute documentary made by his clearly heartbroken actor father, David Kossof, on You Tube. I saw them several times including two or three times at Southall’s Farx Club where I once jumped on the stage to stop a speaker from toppling on top of Kossof as he did his trade mark lean back into the stack during a solo. ‘Tons of Sobs’ was my go to album while I was studying for my spectacularly unsuccessful ‘A’ levels: two ‘E’s and an ‘F’! Just to give you a flavour I leave you with this …….https://www.youtube.com/watch?v=BzKBkvpD-ik

*I thought there was meant to be a ban to allow the non- lycra brigade to walk in peace?