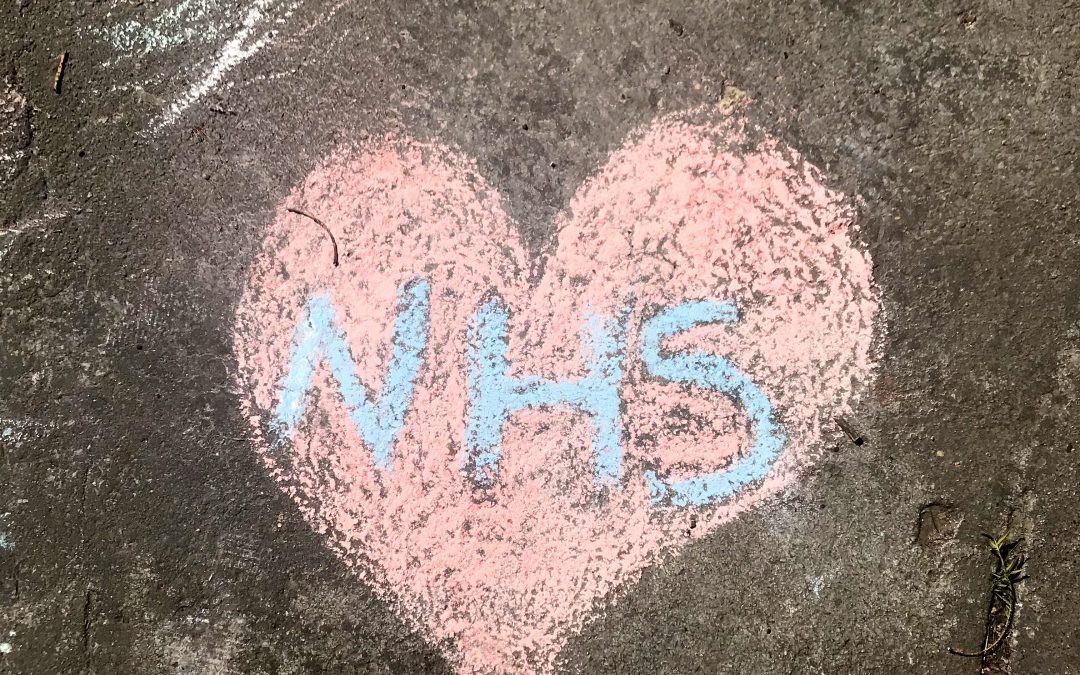 I did find time for a constitutional stroll today and would like to share with you a few thoughts and pictures for the NHS that I found on my way.  The header picture was a chalk drawing on the ground on Chiswick Common.  The following two were in shop windows on Devonshire Rd. 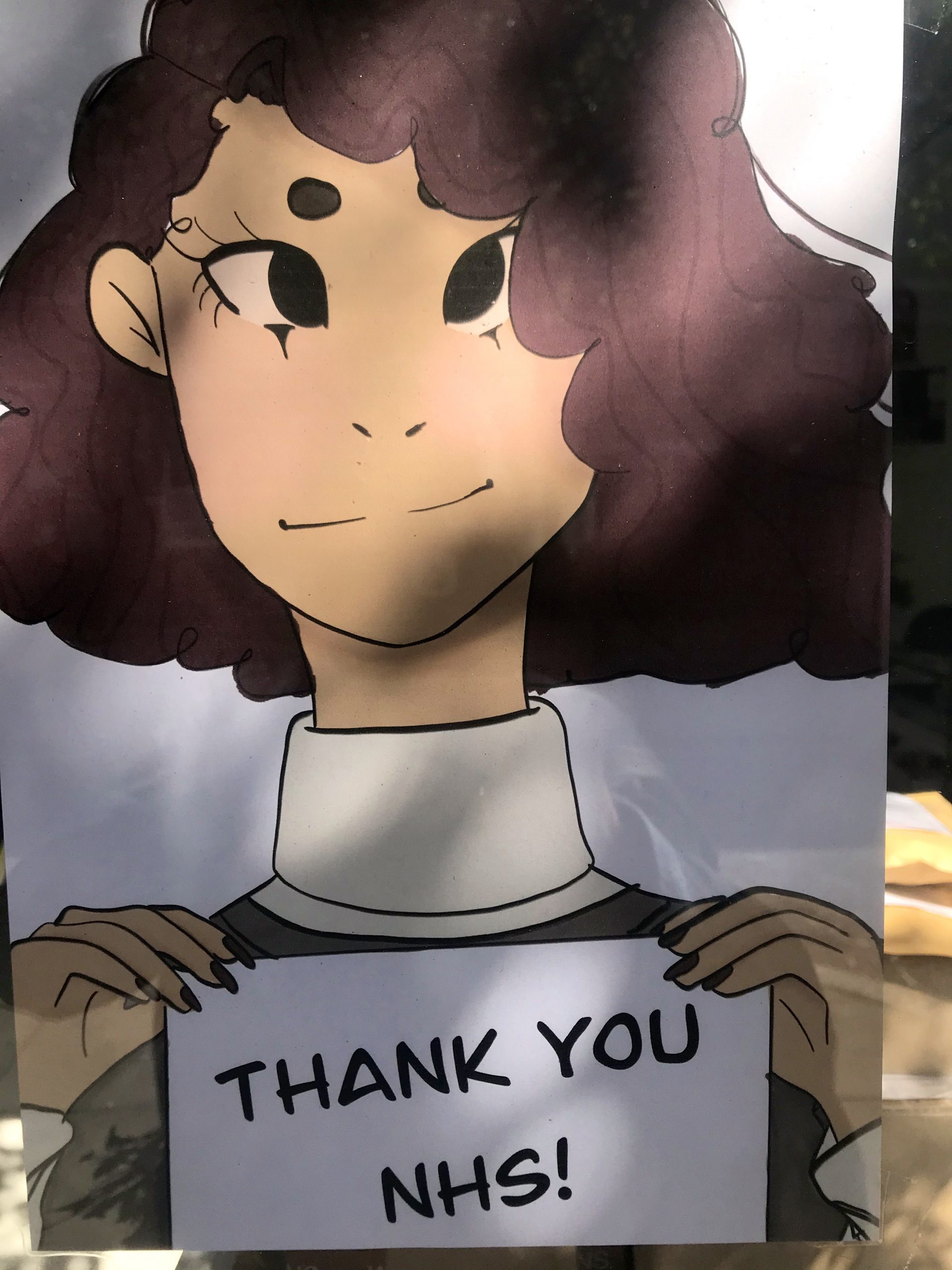 I think Kai’s Rainbow is the nicest. 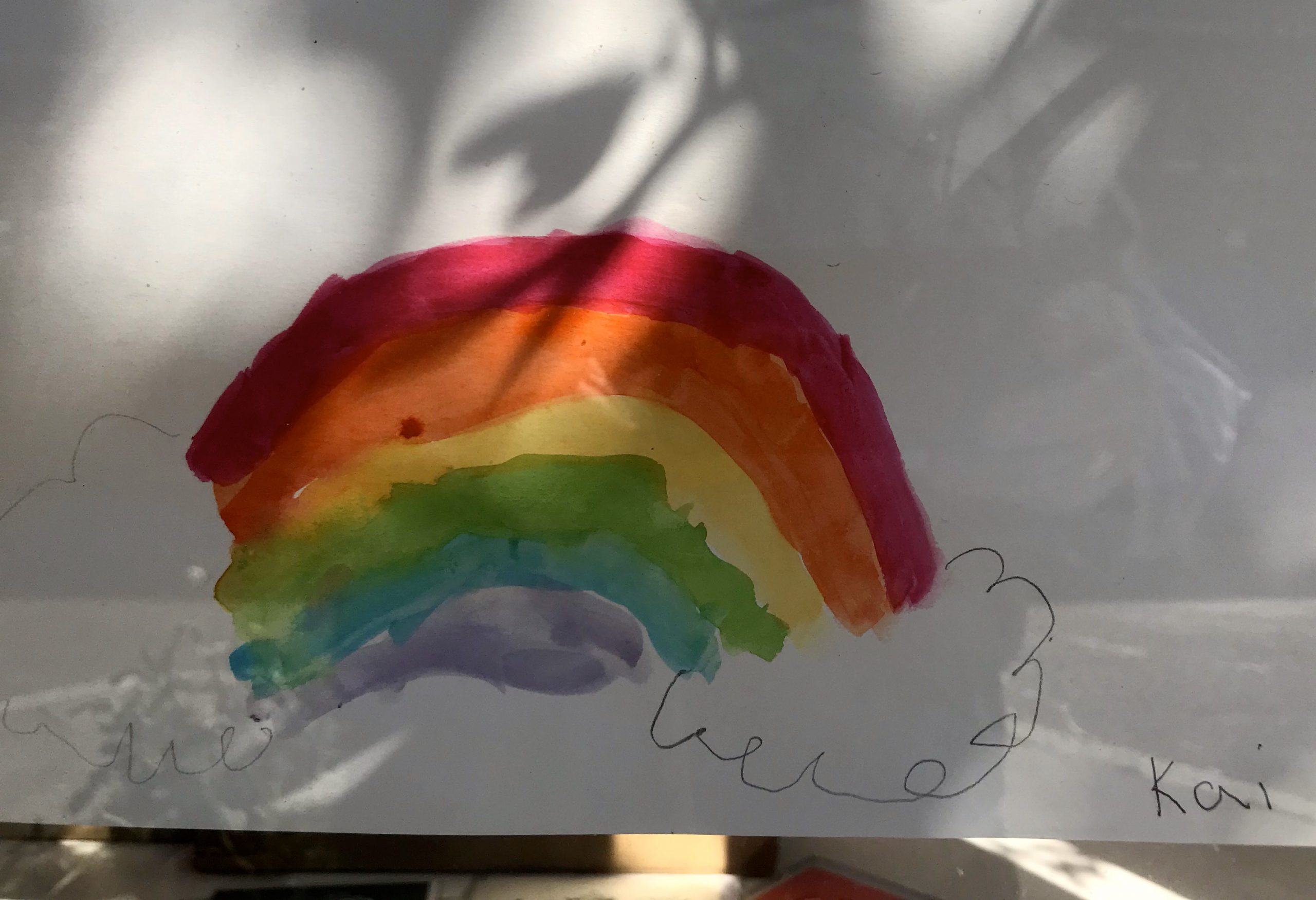 When I write about my vinyls I play the album as I am doing so to get in the mood.  The sounds takes me back and I can remember some of the things I was doing during that period, if not always specific activities at a particular moment.  Certainly, I have forgotten more than I remember so I turn to Mr Google to aid my memory and sometimes that takes me into a whole world of time wasting.  Well, even it it carries me into the realms of imagination or even reminiscence it can’t be a waste if it steals me away from corona-itis, can it? 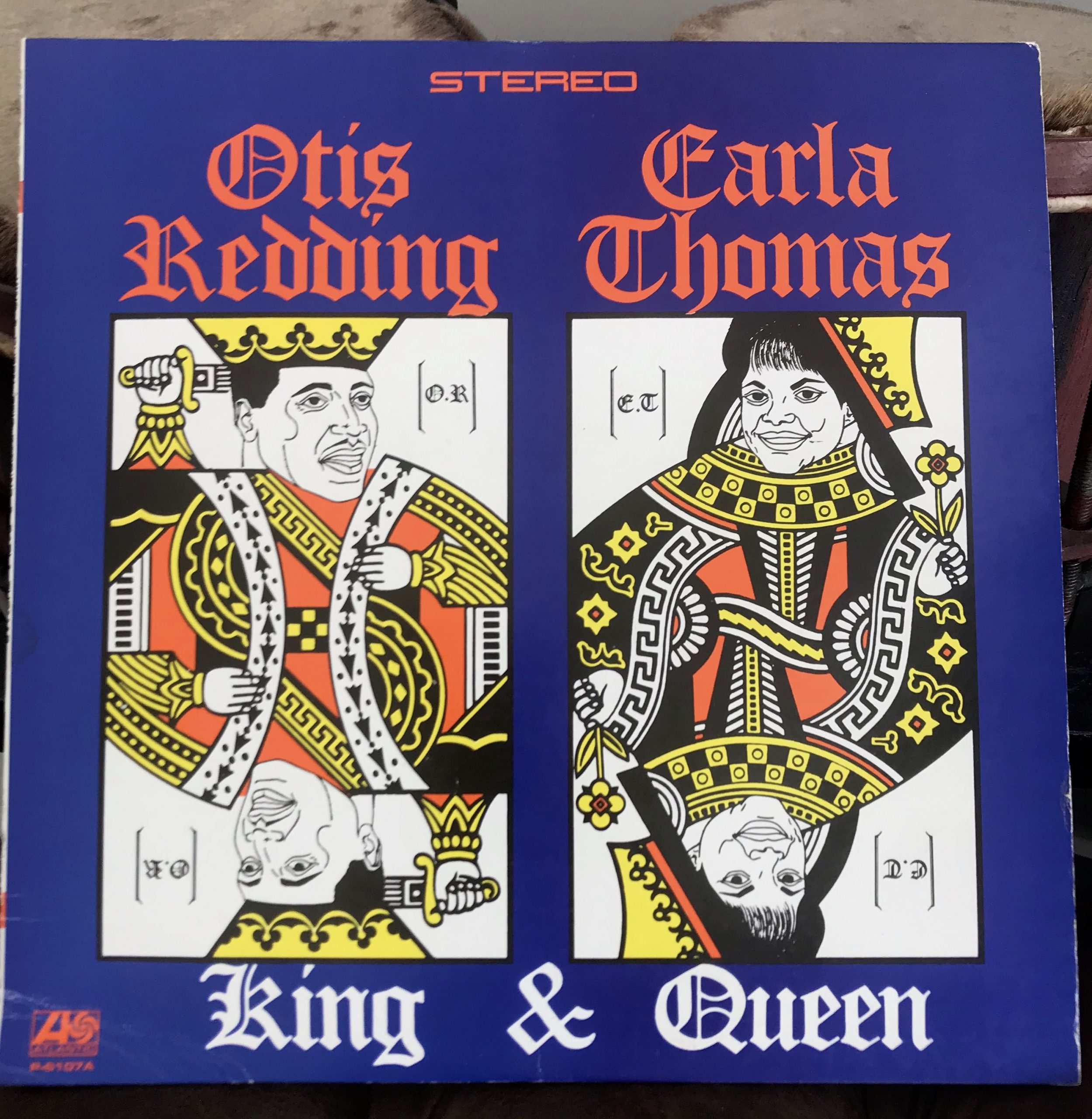 The album “King & Queen” has long been a special one in my mind. It was released in early 1967 and Otis Redding was killed in a plane crash in December that year. His only other album in 1967 was a ‘Live’ one so this was actually his last studio album. Of course, he famously recorded “Sittin’ On The Dock Of The Bay” with Steve Cropper just a few days before he died and it was released posthumously, becoming his only No. 1 single. I have early memories of Otis from a school friend’s older brother’s collection. We used to go round and he would play us his ‘L.P.’s and tell us about gigs he went to as we were too young. They had an early stereogram * too for listening rather than our little dansette. “King & Queen” never quite hits the intensity of Otis’ solo albums but there is no doubt in my mind there was a chemistry with Carla Thomas. She was another Stax ‘original’. At the time we all enjoyed the smooth sound of Detroit’s Tamla Motown but the southern rawness and passion of Sam & Dave, Rufus Thomas (Carla’s father) and Arthur Conley (all usually backed by Steve Cropper and Donald ‘Duck’ Dunn and Booker T & the MG’s as well as Isaac Hayes on piano and the Memphis Horns) were what really rang my bell. Most of them were indeed born in Georgia or Tennessee.

It is possible that Stax wanted to replicate the success of Marvin Gaye’s collaborations with female singers from the Tamla stable. In 1966 ‘It Takes Two’ was a huge hit for Marvin and Kim Weston but it was with Tammi Terrel that the duet genre hit its popular peak with songs such “Ain’t No Mountain High Enough” (1966), “You’re All I need To get by” and “Ain’t Nothing like The real Thing” (both 1968). In fact, Stax did release three tracks off the album as singles. Actually, my favourite duet single of all time was also a Stax release and I still have the 45rpm of Judie Clay & William Bell’s ‘Private Number’, which still ranks for me as one of the greats. The only modern equivalent I would mention in the same breath is ‘911’ by Wyclef Jean & Mary J Blige and I am sure both of them would acknowledge the debt to those greats of the ‘60’s.

Anyway, on this album the track that has always stuck in my mind is “Tramp”. It always sounds as if it was written for them but was actually released as a single only a few months before by Lowell Fulson. Otis and Carla certainly adlibbed their own words in the dialogue “You’re country – straight from the Georgia Woods” was certainly true as that’s where Otis was born. It gives an opportunity for their personalities and their humour to shine through. Over the years other tracks have become more regulars on my playlist. “Lovey Dovey” has soft smoochie lyrics all right but has a pounding, driven tempo from the Dunn / Jackson rhythm section augmented by some classic Memphis Horns brass – the real pulsing Stax sound. The other track that I would recommend is “Are You Lonely For Me Baby?” It was first recorded by Freddie Scott in a funky style and thereafter has been covered by a range of artists including Al Green, The Grateful Dead and Steve Marriott. Frankly, these versions are hardly worth listening to (despite them all being great artists) and expose the actual song as being limited. What makes this version so listenable is the vocal performances by both Otis and Carla sitting on top of a much more rolling rhythm. The whole album pretty sums up the raw sound and natural production that came out of the Stax and, later, Atlantic labels over the sweeter and more polished sounds of Detroit.

Finally, back to my copy. Rather bizarrely this is an import of a Japanese edition. It was published by Atlantic in Japan in 1972 and I found it (possibly, my memory is not what is was) in a record shop in The Cut, near Waterloo Station, around 1980. It has a strange insert in which someone has re- translated the lyrics back to English from Japanese – and gets them wrong! Just as an example from “It Takes Two” ….. the first is the correct version.

One can have a broken heart, living in misery
Two can really ease the pain like a perfect remedy
One can be alone in a car, on a night like these all alone
Two can make just any place seem just like being at home.

This is the ‘re-translation, as published, seriously.

One can have a broken heart, living in its misery
Two can really take the pain and flip it like gliberdine  (WTF !)
One can be all alone in a park, out and he’s all alone
Two can make, draw anyplace, just like being right at home.

There are other weird mis-translations and it is hard to imagine the label allowed that to pass. Anyway, I give you my version of the verse for these corona nights.

One can be Corona locked, living and oh so lonely

One can drink a bottle of gin, fall asleep and dribble

Two can’t even share their nuts, not even a little nibble.

* OK, I am assuming there might just be one or two of you that are under 40 who do not know what a ‘Stereogram’ or a ‘dansette’ are. Then again maybe there are some of my age who might be whisked away to their childhood just by the sight of these things – to a time when they listened to their music sitting on the floor in front of one of these. 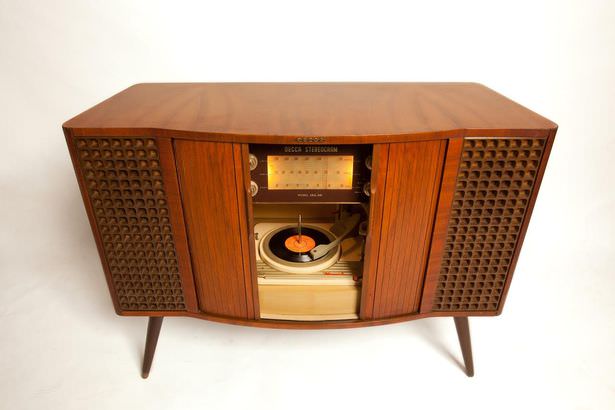 A ‘Stereogram’ because it did have two speakers and allowed for an early form of Stereophonic sound even though most records were only ‘Mono’. Sometimes they were called ‘Radiograms’ because they also had radio receivers in them. the ‘Gram’ referred to the ‘Gramophone’ part, of course – you knew that right?

Tiny and with a tinny sound, ‘Dansettes’ and similar sized record players were really best for singles. though they had the benefit of being ‘portable’ – see the handle. No, that didn’t mean you could listen to them on the go – doh!