Unfortunately, I don’t have any Fela albums on Vinyl and therefore none of legendary drummer Tony Allen who passed away in the late hours of yesterday, aged 79. Nevertheless, I feel I should share a few thoughts.

He will forever be remembered as a key part of Fela’s Africa ’70 and was actually in its forerunner Koola Lobitos playing with Fela then from the mid ‘60’s through to when he left the band in 1979. No doubt there will be many obituaries and the debate about how far Allen actually was responsible for Afrobeat’ rhythmical structure and how far he just performed what was laid down by Fela will be played out endlessly. In any case, he was a fundamental part of the development of Afrobeat but also went on to gain massive respect as a musician in his own right and was actually as prolific over the last few years as he had ever been. I was fortunate enough to see him just a few years ago at Cheltenham Jazz Festival when my good brother Oti Bazunu and I went to explore collaborations with Oti’s Lagos Jazz Series. It was such a pleasure to see the audience full of twenty-somethings who had been introduced to Allen’s magic through Damon Albarn. More recently he was on the same bill as Seun Kuti & Egypt ’80 at the Brixton O2 Academy that I attended and Seun lists as a special memory. Interestingly Allen was critical of many of the new Afrobeat bands that have sprung up globally. He has said they can reproduce the guitar and horns sounds but can never master Afrobeat drum rhythms and Seun too has explained that it can be frustrating when guesting with these Afrobeat bands as few of their drummers can accurately mimic Allen’s true pattern and beat. Allen himself described it by saying that you have four limbs and each of them is doing something different, which explains why several well known musicians have called Allen the best drummer in the world. 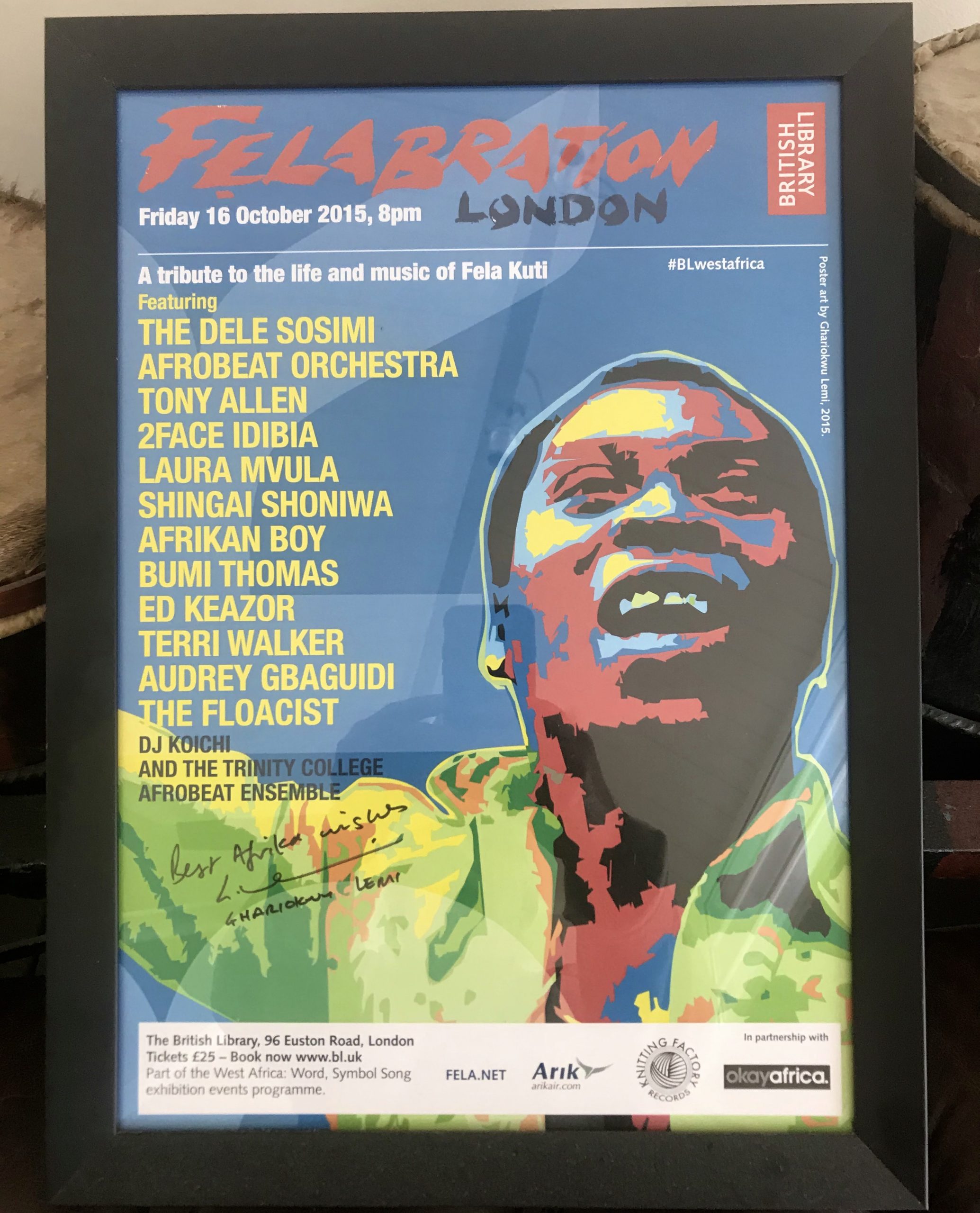 The first from Fela Kuti with Africa ’70 is a 2019 reconstruction.  Most of the Clips of Fela either do not show Tony Allen clearly or are post – 1979 so this is the best I could find that show some of Allen’s metronomic drumming.  ‘Lady’ was on the 1972 ‘Shakara’ album and once Fela released a track, as a matter of policy, he did not play it live so I am assuming it must have been from around 1971.

The second Video shows a collaborative performance with Ginger Baker (see My Corona Blog XXIII) from about 2013. Dele Sosimi played with Fela and later in Fela’s oldest son Femi’s ‘Positive Force” he continues to be a major ambassador for Afrobeat and can often be seen playing in various London venues (and hopefully again soon). The great thing about this clip is that it displays the mutual respect and friendship that Allen and Baker had for each other. Their most famous collaboration was the 1978 Berlin Jazz Festival but most of that is based on the drum duet and to be honest I am not a fan of long drum solos. I think this clip shows the real art of Afrobeat drumming more sympathetically. The poster shown above was from a gig by Sosimi and friends, including Allen, for the Annual Felabration celebrations across the world. I was fortunate to be there and to have Lemi Ghariokwu, the designer of many of Fela’s album covers, sign the poster for me.

Damon Albarn and several other musicians are said to have formed ‘Africa Express’ when they were disgusted that Live Aid concerts actually had almost no African musical contribution. Part of the cultural expression that believes that the term ‘World Music is nonsense, and is in fact demeaning, as do I, they created a collective of artists from the west and across Africa and elsewhere. Tony Allen was a key part of this endeavour and he has worked with Albarn on several of his other projects including ‘Rocket Juice & the Moon’ with ‘Red Hot Chilli Peppers’ Flea. Albarn said in the lyric for the single ‘Music Is My Radar’ that “Tony Allen got me dancing” and his support meant Allen’s single ‘Go Back’ was a hit.

Tony Allen – Resting at peace with his ancestors.