“After silence, that which comes nearest to expressing the inexpressible is music.”

The loss of such an icon as Tony Allen has triggered a litany of reminiscences across my Social Media feeds and even emails. I suspect I was just one of many thousands who spent part of yesterday evening flicking through You Tube clips of the master. And doesn’t he just come across as a decent bloke? I was delighted when friend Anne sent me a picture of her Vinyl copy of Tony Allen and Afrobeat 2000’s 1984 album “NEPA”. Though this was the acronym for “Nigerian Electrical Power Authority” the album was subtitled “Never Expect Power Always”, which was the ordinary Nigerian’s experience of the distribution of electricity. So much so that, according to Anne who has one foot in London and one in Lagos, having been brought up in both, it was that title that attracted her attention. Anne thinks she would have bought it in either Our Price Records or Tower Records, two names present in most UK High Streets, and that collapsed in the mid to late 2,000’s when on-line purchasing and then streaming took over. The Guardian lists the title track of what was his first full album after leaving Lagos, he recorded it in London and moved to Paris shortly after, as one of Allen’s top ten and it certainly displays his Afrobeat drumming at its finest. 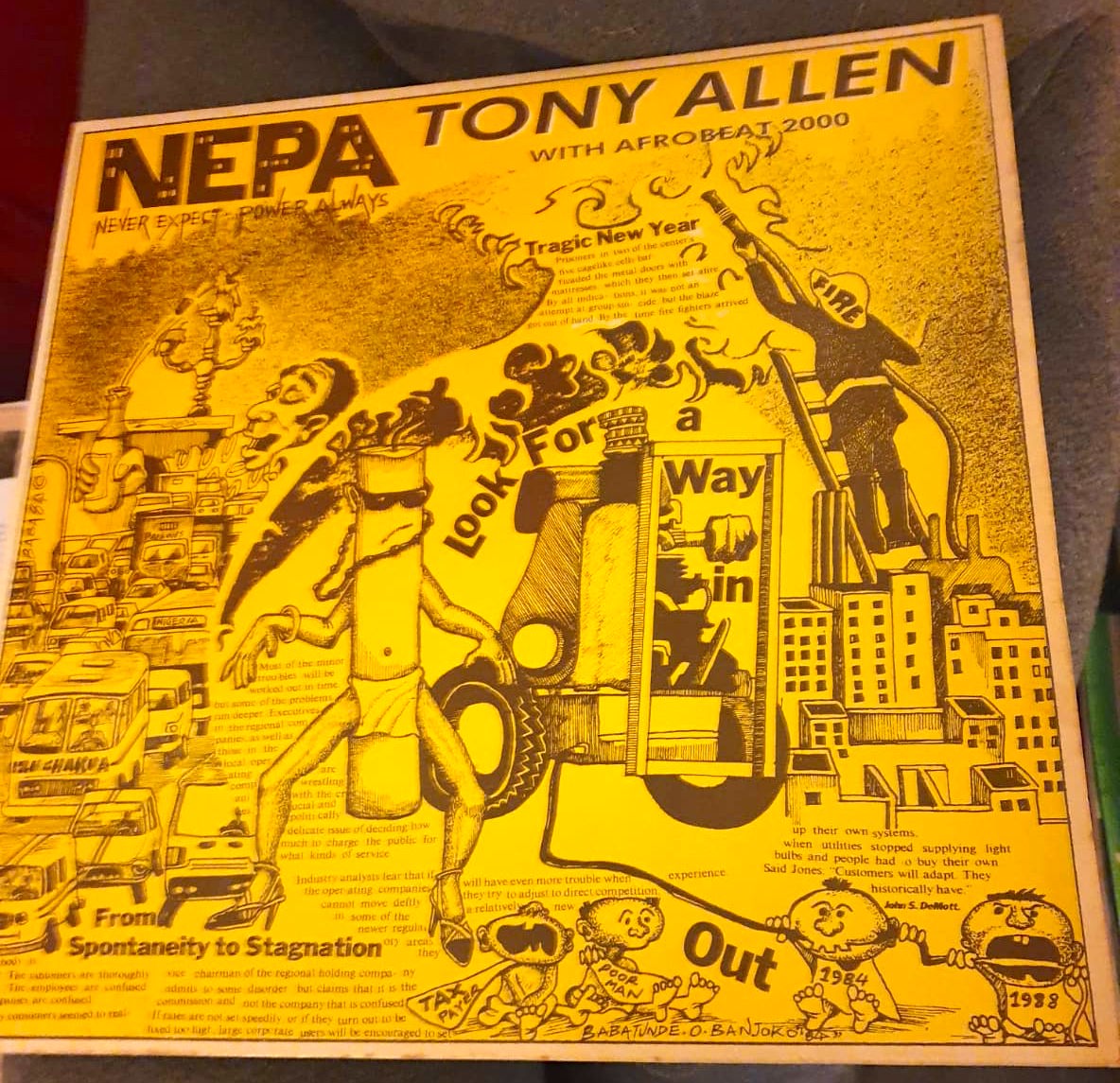 NEPA – Tony Allen. Fela’s influence is even obvious in the cover’s design. 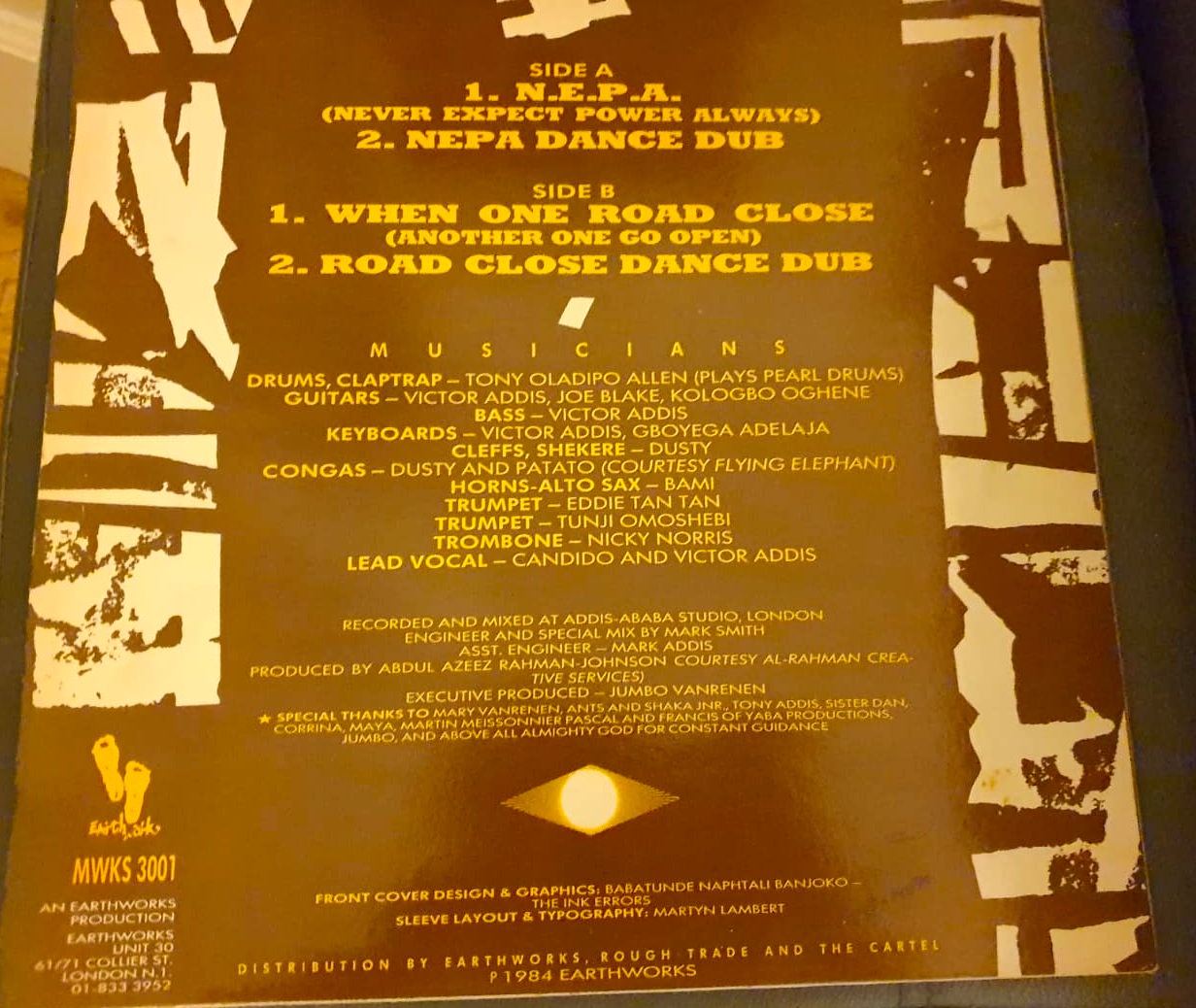 Thanks for sharing Anne.

I would encourage readers to photograph their own Vinyl covers and sent them to me with a few words of what they mean to them or how they are connected to any of the topics I write about. In fact, one of the factors that keeps me focused on a daily edition, if I may call my lock-down ramblings that, is the feedback – whether it is by email, Whatsapp message or a comment under the Blog itself – so thanks and please keep them coming. When I conceived the idea of a kind of diary of how I cope with the semi-isolation it was meant to be a kind of internal documentation but this thing has a life of its own and I am happy to go with the flow. The element of this fluid stream that seems to have most touched a nerve is indeed the regular post of one of my Vinyls. There seem to have been two responses.

The first is that this musical archive is a shared history, its not just mine. Many of the labels have a large ‘A’ to show that my sister Anne took them to parties. That might seem strange to anyone under 50 but we took our choice of music with us – yes, to parties but often just to listen to with our friends.  Many Saturday evenings of my mid-teens were spent with a small group of mates in their folk’s house playing each other’s records and getting complaints from their parents for the noise. Jagger and Richards famously reunited when they bumped into each other, I think on a train and one of them had some Blues Vinyls under his arm – look what happened on the basis of that conversation! So many of my friends from our student days in Brighton have messaged to comment on a shared memory that the music triggered. Songs they may not have heard for years have taken them back, as they do me as I play them (on Spotify) as I write, to a particular party, or a hanging out room in a shared house or even one specific moment of friendship or love. Somehow, the Vinyl memories bring out these ‘affections in common’. In those days our emotions were somehow closer to the surface, ready to be touched at a period of transition as we adjusted to adulthood and at that age they were somehow played out more publically. I guess we lived more communally then as students or in shared houses. Just as many of our children did recently when away at University or even still do today. Their sound tracks might be different but I suspect the inherent emotions will be the same. Even later, though we live more privately as we get older, music is still the backdrop to remembrance of key life events: marriage, birth of children, even instances of loss or separation.

In an email accompanying one of her album covers dear friend Vanessa said, “Music and nostalgia are so intertwined that some pieces carry an indelible, personal hallmark”. This leads me to the second aspect of the responses. Isolation often leads to introspection. During many Zoom calls it is clear many people are taking the lock down opportunity to do tidying up type chores. I have mentioned sorting out old photos, as are some other friends, while others have commented on clearing out old cupboards and sheds, junk filled spare bedrooms or just bookshelves. These activities can also increase the tendency to reflection as it is easy to pause the actual activity to re-read that old letter, flick through those old pictures, skim though those programmes or even play those old albums. Opening the door to introspection can take one into different places: into joyful recollection yet also into regret and recrimination. The latter is a concern for some in isolation and the struggle to retain a positive outlook. We can all look back and pick out those parts of our lives or actions we regret but therein lies danger. It easy for me to comment but I recognise some people have personalities that are more likely to take them down that road. My introspection can be wistful at times, especially when I consider friends I have lost contact with or particularly those friends that have fallen along the way. Last year was one of loss for me but whenever I think of Valerie Priddy or John Clark, the music they loved and we shared becomes inseparable from their memory. It is the enduring memory of loves and the friendships that help me retain my equilibrium. If these tracks bring out a locked down, isolationist tear they are as likely to be from a recollection of laughter than the dwelling on a regret.

Vanessa’s email brought with it the cover of an album I have not heard for years, possibly not even since those Brighton student days we all shared. Listening to it took me back to ‘The Good Companions’ pub, to late night games of Risk or Mah Jong and Sunday morning walks along stormy sea fronts to clear the head. Terry Reid had a voice that seared the brain. He was even an influence on Robert Plant, introducing him to Jimmy Page when he refused the invitation to join led Zeppelin. I can only remember a couple of albums and then he kind of disappeared but researching this I see he had a successful career as a session musician and still performs to day. 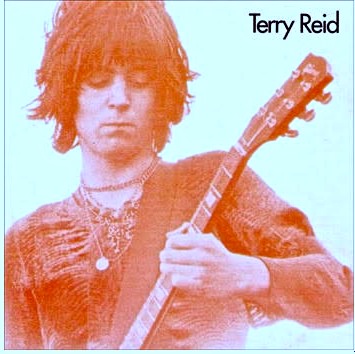 Vanessa said: “This album straddles that period of adjustment between home and college for me. It breathes liberation and rebellion and yet it’s also, lyrically, very sensitive……” and in her opinion, “no-one in the history of time has ever sung ‘Stay With Me Baby’ the way Terry Reid does.” When I listened to that rendition I have to agree. Vanessa went on to explain that in 2007 she went to see him with another friend, Heather.  In her words: “After the gig, I spoke to him about the impact he had on me as a young woman. He was dignified, kind and graceful.  There he was, playing to a relatively small audience – a musician with an outstanding pedigree. He should be a rock icon – he is definitely one of mine.”

To help you decide if you agree I found a video of a live performance of the song “Superlungs My Supergirl”, actually written by Donovan and off the same album.

I finish off with some lyrics from another Terry Reid song ‘Friends’ that Vanessa herself finished her email off with. After all, its friends that keep my introspections positive even if they are more of the remembered or virtual variety these days……… but not for ever.

There’s nothing new, it’s all there to remind you
It’s no different anyway you recall
You only wait around and float on every corner
And know you’re in luck
‘Cause you know them more

Thanks Vanessa and thanks again Anne.