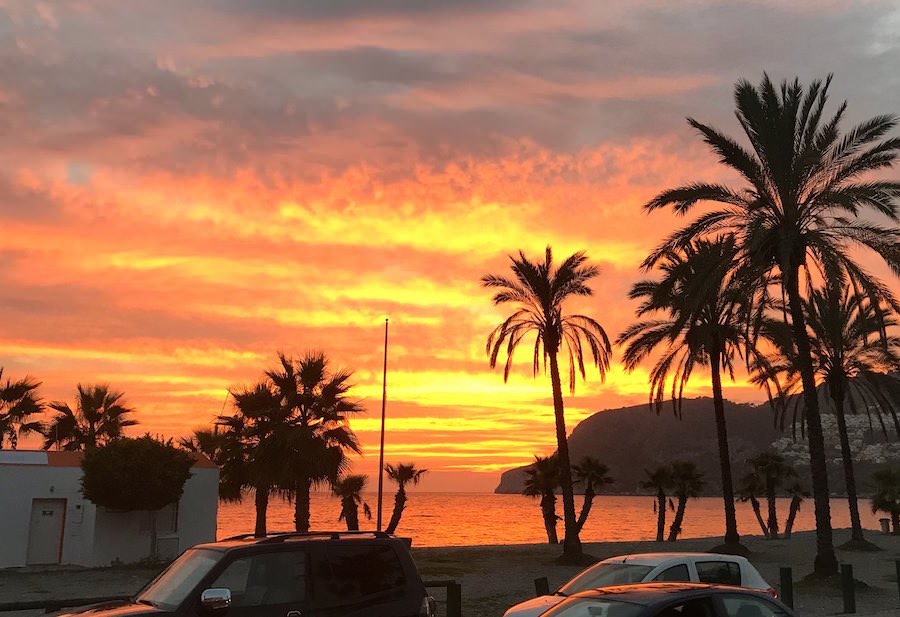 Workin’ the whole day through

Tryin’ to find lots of things not to do

Isn’t it just a crime

We never do have the time”

Goodness, is it that time already? Is it just me or are other people finding their body clock has adjusted to a new locked down activity and time scale? During the first week or two I would be getting very fidgety by mid afternoon. Now, I look up and see its already 7 pm and my response is where did the time go? I guess partly this is driven by the longer daylight and sunnier weather but it is not that I am achieving more. Most of the projects I started in a flurry of ‘things to fill my time during the lock down’ mode have ground to a halt or at best occasion some sporadic activity. So I am not doing a great deal and it is taking me a long time.

All that is a pathetic excuse to explain why I did no Blog yesterday and why today’s is both short and late. Having a Sunday hangover after a physically distanced corridor musical jam Saturday evening may also be part of the reason but maybe that’s for another time. I will take the opportunity to just focus again on how music creates connections.

On Thursday 8 of May 1969 I went to the Royal Albert Hall to see Jethro Tull, Ten Years After and Clouds in a series of concerts (we didn’t actually say ‘gigs’ then – when did that become a frequent term?) called ‘The Pop Proms’. Not long after that The Albert Hall stopped allowing what they termed ‘pop music’ from being played there after Pink Floyd fired cannons and several other incidents. Who can remember ‘Clouds’? I can’t. I only knew they were on the bill because The Albert Hall has such an amazing archives section. I was particularly into Jethro Tull though not as much as sister Anne who used to sing along to the Aqualung album regularly. I did already know Ten Years After and may well have already bought their second album “Stonedhenge” before the concert. 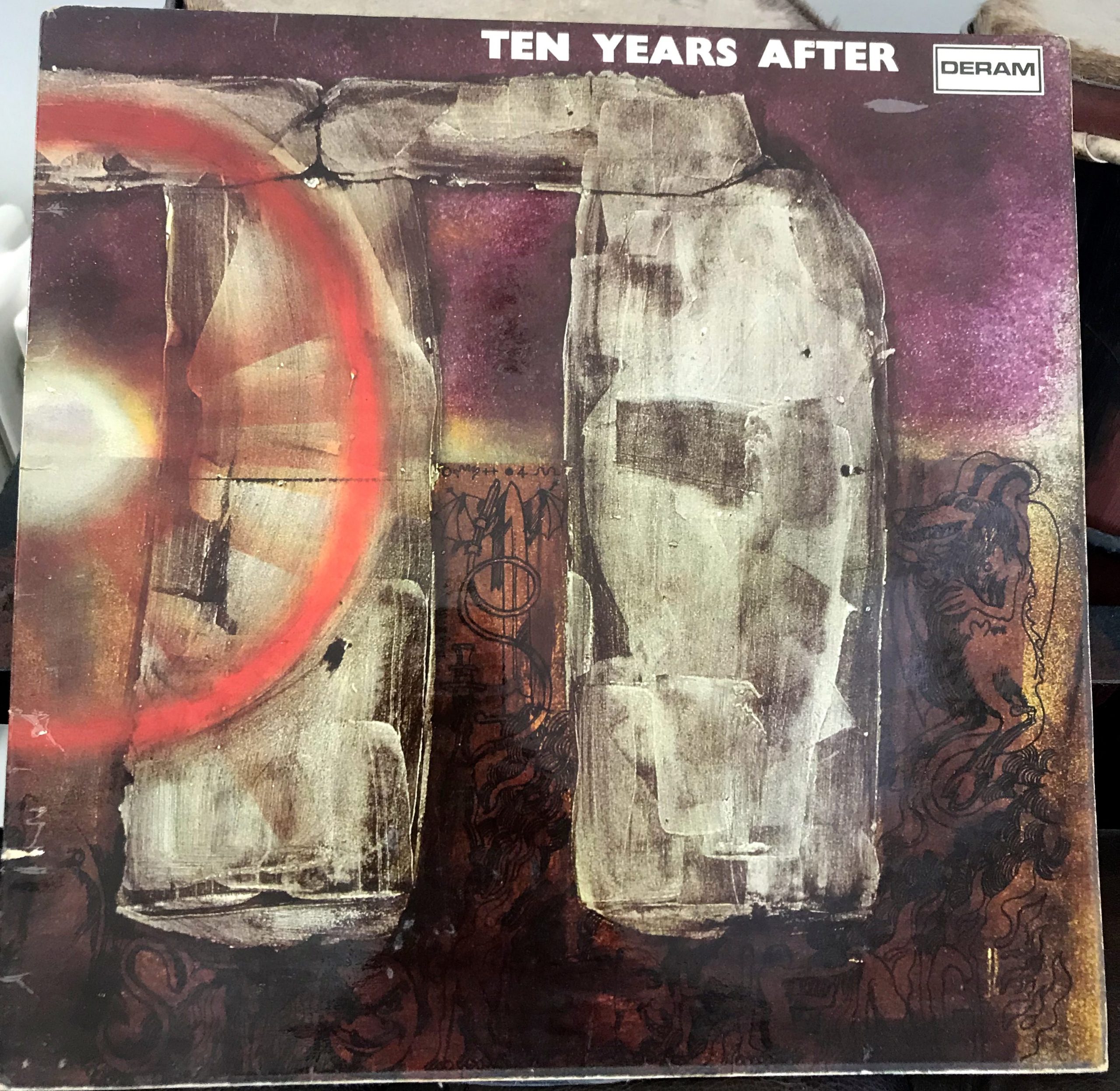 Certainly, Alvin Lee was a fine guitarist but to me their live shows tended to be a bit one paced as he spent most of his time proving how fast they could play. Their career really took off just a few months after I saw them when they were touring the States and got the chance to play at Woodstock.

The connection to my usual themes now takes a sideways jump. Instead of Chiswick or Lagos I am going to take you to the little town of La Herradura in Andalucia where, as I am sure most of you know, my sister lives. Now Anne is a fine Jazzy Blues singer herself and I might just sneak in a video of her performing down there but that’s a maybe for a later date. That coast is a true oasis for musicians and there are any number of great music bars for them to play in. La Herradura itself has several and one in particular is in my top ten bars anywhere in the world. La Cochera is special. It is the eccentric reflection of the vision of a warm human being, Antonio, who has created an amazing space in what was his family’s garage – hence the name. The bar itself is full of quirky ‘objets d’art’, murals, bright colours and lights. It also has a stunning garden. I feel I should share a picture I took of it one evening. 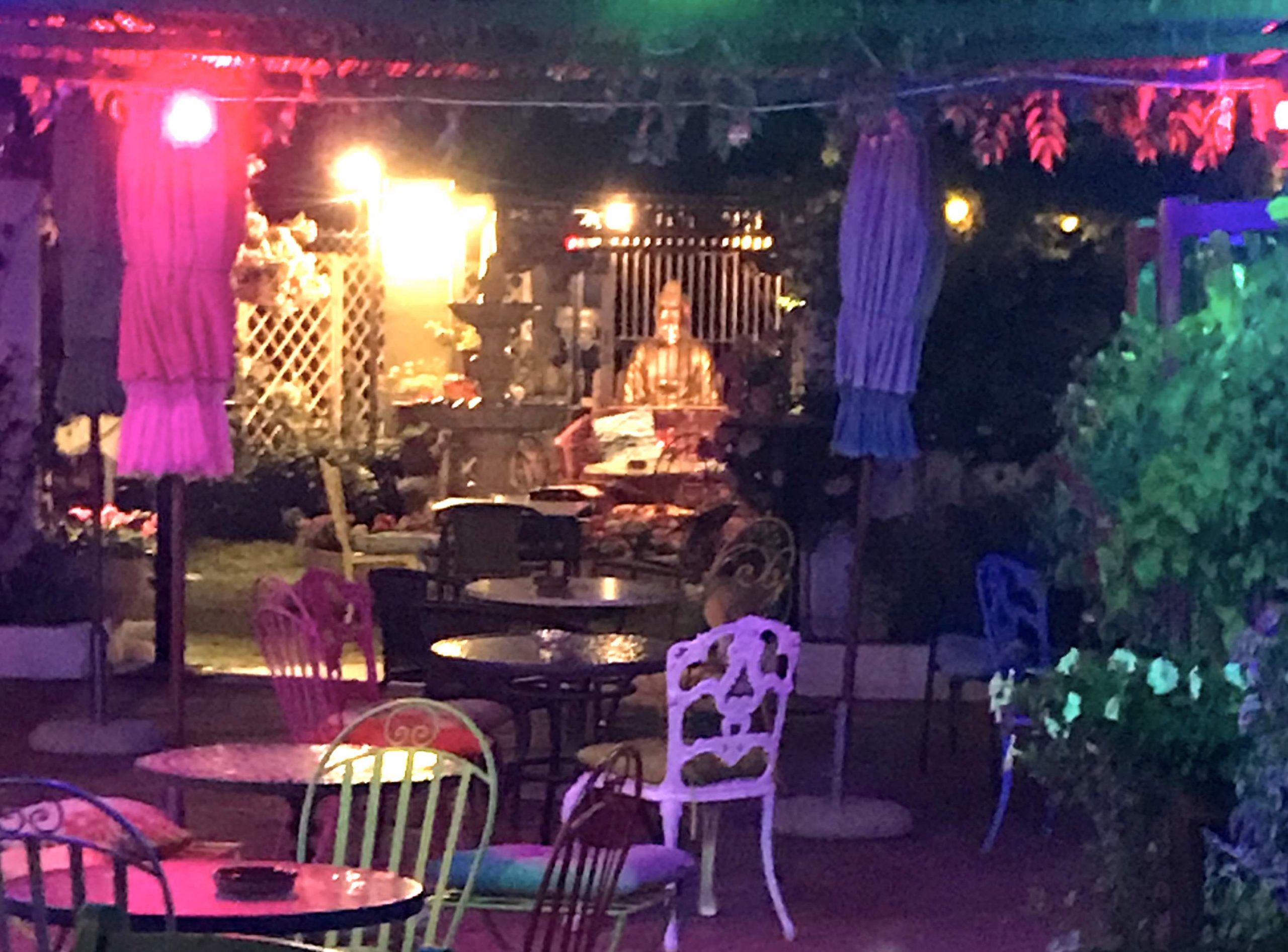 La Cochera – evening in the garden. The Sunset in the header picture is actually taken from in front of La Cochera facing the road that separates the bar from the beach.

Yes, despite all this beauty La Cochera is defined more by the ambiance, I would even call it karma, that has been created by Antonio, his partner Mario and all their staff for it really has just a beautiful vibe. Oh, and did I mention the music? Antonio is obsessive about his playlists and you can tell. It is one of the most diverse, eclectic playlists of any place I know. You can hear jazz and electro and gospel in the time it takes you to down a beer and it is curated perfectly. I am permanently using Spotify when I am there. And, and yes I am getting to the point, he has regular live music, which is where we get to my connection. One of the most popular artists along that coast is Paula Bramlett, better known as Mama Paula and on Anne’s recommendation she and I went down and watched Paula and her blues band and I was blown away. After the gig I told Paula that Keith Richards had been in the audience. Once she got over her disappointment she invited me to have a beer with her and her partner in crime Lynn and we got to talking music. A couple of years later I was thinking of what to do for my 65th birthday and it just seemed natural to invite as many friends as could come down to Spain for an extended blast. Which is just what we did. We had wonderful food and Flamenco in another favourite place, Las Maravillas, one evening and the next we hit La Cochera to dance to Mama Paula. We had such a blast that when Antonio heard quite a few of us would still be around the next weekend he invited Paula back to play again. The connection? Oh, yes, sorry. So, if you ask me, if Paula had been a Paul she would have had a glittering career (and made a lot more money) but especially back in the 70’s and 80’s rock was sexist and did not take women guitarists seriously. Eventually, down in Spain Paula met Ten Years After’s keyboard player Chick Churchill * who was so impressed that they teamed up and for several years played as ‘The Mama Paula and Chick Churchill Band’ until Chick returned to the UK to play with the re-formed TYA. Check out her website ** for more of her fascinating story and some video footage. I will leave you with a song from the La Cochera set. Apart from Paula it features a friend Tijs Groen as a guest on guitar who has played a mini-gig in my Chiswick flat and I hope will again. Her band comprises Marcelo as second lead and rhythm, Doctor Karl on keys with Terry on bass and, I think, Javi on drums. The song is a classic Blues ‘Have You Ever Loved A Woman”, written by Billy Myles and first recorded in 1960 by Freddie King. Eric Clapton has played it constantly over the years, in fact, even when he was with John Mayall and it is included on a couple of live albums too. I suspect Paula’s version is more influenced by his. As soon as all this Corona restriction makes it possible I will see you all there. Until then, enjoy!

*   See what I did there? I told you there was a connection.