It’s only publishers who think that people own it.”

I get a real buzz from feedback to these blogs and the most animated of the feedback seems to have been about how the old Vinyl photographs and music have sparked memories. I made the point in an earlier Blog that music triggers shared remembrances and it also sets off parallel memories that may or may not coincide later down the path. One friend, Anne, sent me a mail about how my Millie Small Ska post jogged her Two Tone Ska memories. We didn’t meet as colleagues at Guinness until the early ‘90’s so these musical touch points were long before we had shared memories but there were connections. I will share some of her story because the same music was playing in my story just as it was also the soundtrack for her. Just as background, Anne and I were colleagues when “Guinness Africa” became a business unit. She actually pops up in the early chapters of “Never Quite The Insider” when she accepted a dare to make a comment about frozen peas in a presentation to our boss about the African beer market. We worked together and were friends at various points here and in Nigeria over the years despite her attempts to constantly belittle my qualifications as a ‘marketing guru’. * There is also a brief Chiswick connection when for a period Anne considered a career change and after studying Beauty Therapy she did a work placement in a Salon on Chiswick High Road – and promptly went back to marketing!

So, I will use Anne’s own words as she responsed to my request for friends and readers to share their Vinyls and stories ……. “I’ve chosen The Specials and their first album, 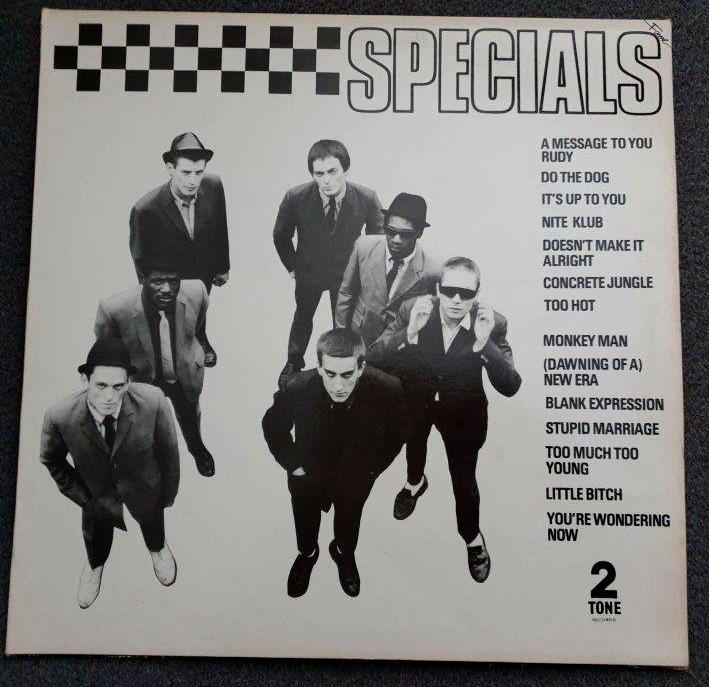 ‘The Specials’ which was produced by Elvis Costello. I was a huge 2-Tone fan in my late teens, which is why when I read your blog this morning about Millicent Small, I thought, what a coincidence Keith’s just written about Ska which was such an influence on 2-Tone. I love every song, which I rarely do with albums, and so many of them have meaningful lyrics. If I had to choose one though, it’d be ‘It Doesn’t Make It Alright’. https://www.youtube.com/watch?v=cnNLGF3TZxI&feature=youtu.be

Anne goes on to share the way this music played out during some significant moments in her life. I am sure many of us ‘over 50’s’ will remember where we were during the this period …………

“And they set up 2-Tone when the National Front were at their height, so it was so great to see bands of mixed ethnicity. When they split up, I was genuinely upset. But they went out on a high as it was when ‘Ghost Town’ was no. 1 during the 1981 riots. I was 19 and at university in Liverpool then and, on the day the riots started, I was helping my boyfriend move house, to Upper Parliament Street in L8 of all places as that was at the centre of the riots (which is why they were called the L8 riots in Liverpool, not Toxteth). I went downstairs to take photos; he was watching from a window and realised that I hadn’t seen that, when the police charged, they were fanning out into side streets. He shouted at me, good job I heard him, as then he yelled at me to run and I started running just as they got to the street where I was. They were clubbing anyone who was standing around but I managed to escape and hide, and then get back to the house after the police had gone past. Keith, it was terrifying. My boyfriend almost started crying when I got to the house as, although he’d seen me start running, after that he couldn’t see what happened. He’d gone out onto the street to look for me but of course he didn’t know I was hiding. When I had my film developed, all of the negatives which had rioters and the police charging were blank….so I’ve always thought that the shop had been asked to hand over those types of photos and the person who was developing mine destroyed them rather than do so.”

As Anne notes, depending on your locality or your age or your politics the sporadic riots across the UK from April to July 1981 were called by different names – at first the Liverpool Riots, then the Brixton Riots, then the Tory party called them Race Riots (to blame people of colour). The real causes were based in Thatcher’s “there is no such thing as society” policies and the lack of investment in urban areas, which, in common with recent austerity measures, worsened economic inequality and impacted harder on the BAME communities that were based there. However, there was a spark that ignited the power kegs. In those days the police could ‘stop and search’ based on ‘suspected’ criminal activity – the notorious “Sus Law’ – and it was being used specifically to target urban black youths. It was several actual incidents that set off specific riots – so, not generic ‘race riots’ – and these spread across deprived urban areas including Toxteth, Brixton, Handsworth, Chapeltown and, nearer to where I was then, Lewisham. At the end of August the ‘Sus Laws’ were repealed when parliament decided that police abuse of these laws was a major contributor to the unrest.

I was living in New Cross at the time, having moved back up to London to start work. In January of that year there had been a house fire in new Cross when 13 people of colour were burned to death in what was suspected but never proven to be a racially motivated arson attack. Tension was obviously high in the area at the time so during the period there was a high police presence throughout. I lived in a cul-de-sac but I remember police cars often coming round slowly and menacingly. If I was white and intimidated imagine how a black youth would feel. Remember at that period the National Front were active and the counter response ‘Rock Against Racism’ was vocal. The Two Tone Ska artists were major supporters of that movement. Although the atmosphere was twitchy I did have one amusing incident. I had been out late somewhere and had come home by night bus from the West End. It was around 2 am that I turned the corner into my street and just as I got to the house my next door neighbours of Caribbean origin, who before then I had not actually met, were pulling a brand new freezer from the back of a white transit. They froze as they saw me and I stood transfixed. I was clearly not meant to witness a van full of white goods being unloaded in the middle of the night. It was a ‘moment’. I thought ‘what the fuck do I say now?’ I can imagine they were thinking something similar. For some reason I was having a party in a couple of weeks so I said something like “oh that’s handy seeing you – I am having a party and I wanted to let you know in case its noisy, so anyway you’ll be welcome to come” and then went in my front door. They did come too and spent the evening sitting on my stairs and rolling fat spliffs for anyone that wanted one. I didn’t get a free washing machine though! Back to Anne ……

“Anyway, back to the album, or LP as it would have been called back then! For me, it’s stood the test of time, lyrics still meaningful, and brings back many memories as you can tell. Playing it again last night had me dancing although definitely not as lively as 40 years ago ha ha. ……. “      (Anne don’t worry. You are not the only one!) …..   “They only released two albums but I didn’t like the second, ‘More Specials’, as much. So after the split, the only record I bought was the Special AKA’s ‘Free Nelson Mandela’. Just thinking about that took me back to being at the Nelson Mandela Benefit in July 1984 at Crystal Palace, although I don’t remember who played other than Jimmy Cliff, Aswad and Hugh Masakela……. I saw The Specials live twice, first in 1980 at Rotters in Liverpool (see the pic of the ticket), supported by the Swinging Cats, and then in 1981 when they were the headliners at a huge Rock Against Racism concert in a park in Leeds. I don’t remember who else was on that line-up other than Misty In Roots (another great band). My boyfriend had organised a coach and we were so angry when the driver wouldn’t wait until The Specials had finished their set because it would mean getting back to Liverpool later than he’d booked! But as the only alternative was to sleep in the park and hitch-hike back to Liverpool, we got on the coach …………” 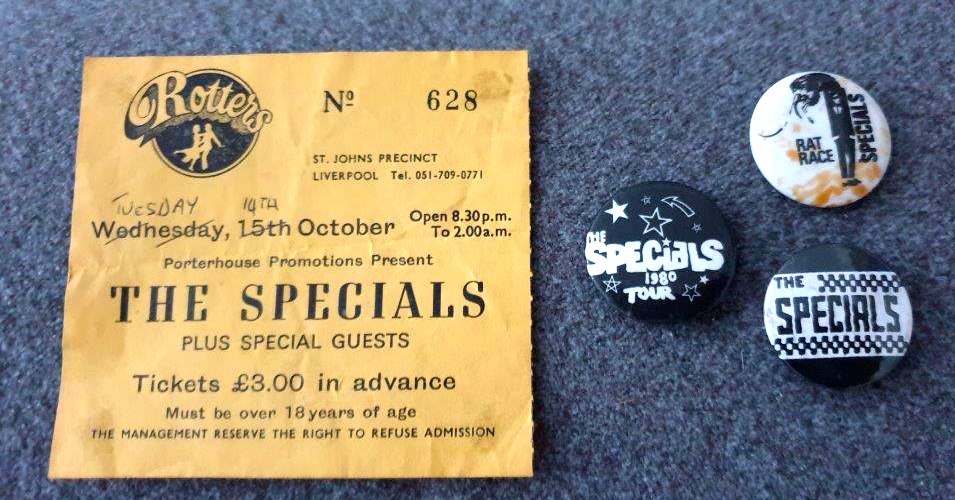 Anne ends her story with “I’ll end with my all-time Specials favourite, ‘Do Nothing’, funnily enough from ‘More Specials’ and written by Golding.”  https://www.youtube.com/watch?v=U7uSUv2deec

Millie Small was living in the UK at the time of the Ska revival though reportedly in some financial distress. She had a daughter, Jaelee, in 1984 and was, according to reports, actually living in a hostel in 1987. I wondered what she thought hearing all this music that she had pretty much opened the door for. She received no royalties apparently. At some point Chris Blackwell must have come to her aid (as he should, frankly) and she called him later her best friend and it was he who announced her death.

So, I am grateful to Anne for sharing the Vinyls and particularly her memories around them. It rounds off a couple of Blogs around skinhead memories although I am always happy to hear more. I have a had a few Vinyl photographs sent including from one of my neighbours, Shea, who I thought was a bit young for some of the albums until he told me they were his Mum’s! So, if you want to send me some of your Vinyls, or your Mum and Dad’s, they all count – as long as there is a story to go with them.