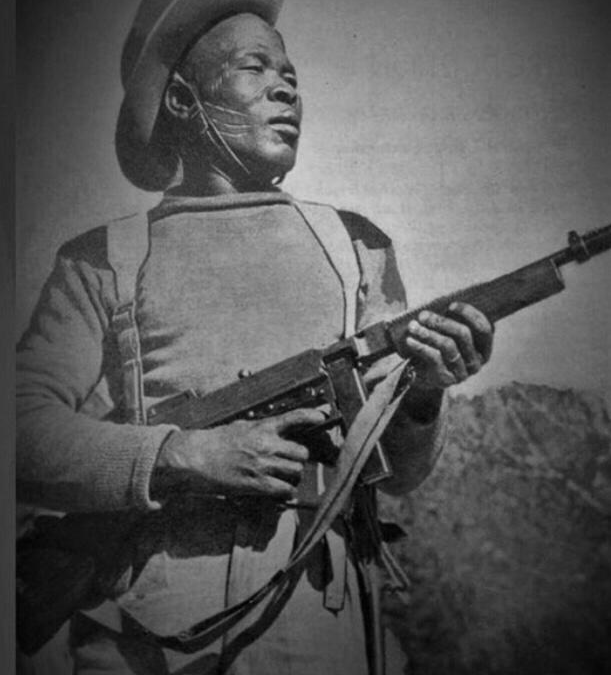 “One of the great attractions of patriotism – it fulfills our worst wishes. In the person of our nation we are able, vicariously, to bully and cheat. Bully and cheat, what’s more, with a feeling that we are profoundly virtuous.”

Matthew d’Ancona is a bright bloke. He was Editor of the Spectator, wrote for the Telegraph and now for the Guardian, has a strong academic record and is a published historian and novelist. In my view, however, he is an apologist for a world-view based on empire and colonialism and is dangerous because he is very astute and dresses it up in ‘reason’ and ‘balance’. Saturday, this was the start of a twitter thread of his ……..

“1/ It’s seriously depressing to see how many people seem to regard the marking of 75 years since VE Day as jingoistic or naff or uncool or unworthy of their attention. More than 75 million died in that conflict, including six million Jews……”

You can see the full thread and the debate below *.

You see I do have a problem with, not VE day per se, but the way it has been hyped up by right wing elements in the media. There is a narrative created that unless you join in and make a fuss – on their terms – you are somehow unpatriotic. Suddenly, the St George’s Cross has become a symbol of a particular England, of a narrow group of Xenophobic jingoists who have created an uber-nostalgic vision of a place that never actually existed. My England and my right to wave that flag at the right occasion (an international sports match for example) without making a political statement have been stolen from me. D’Ancona’s tweet is typical of those that suggest that because I do not want to celebrate in the same partisan way as he does then somehow I am denying the courage of those that fought and died as well as those, including Jews, Catholics, the LGBGT community, those with mental health problems, many people of colour and so on, who were victims. I resent that implication profoundly.

So, before anyone wants to jump on me as a ‘lefty member of the woke society’ as someone with my views was described on twitter then let me honour the memory of those that did fight in a genuine war against tyranny, including my father. He was a willing conscript after his apprenticeship as a bookbinder in Holborn came to a sudden end when his place of employment was destroyed in the blitz. He then worked for a while at the old Watney’s Brewery in Mortlake where he learned a whole new vocabulary from the women in the bottling line! He was posted to the Reconnaissance Corps and went over to Normandy on ‘D-day plus 6’ and fought in the notorious Villers Bocage where the Humber reconnaissance vehicle he was in was destroyed by anti-tank fire. Months later he was billeted near Brussels and was expecting to celebrate his twenty-first birthday peacefully when the Germans burst through the Americans in the Ardennes in what became know as the Battle of the Bulge and he had to join the relieving forces. Fortunately, on December 28th 1944, on his birthday, as his squadron waited in the snow, his colleagues took this picture. He is the one standing and apparently sharing out cigarettes. 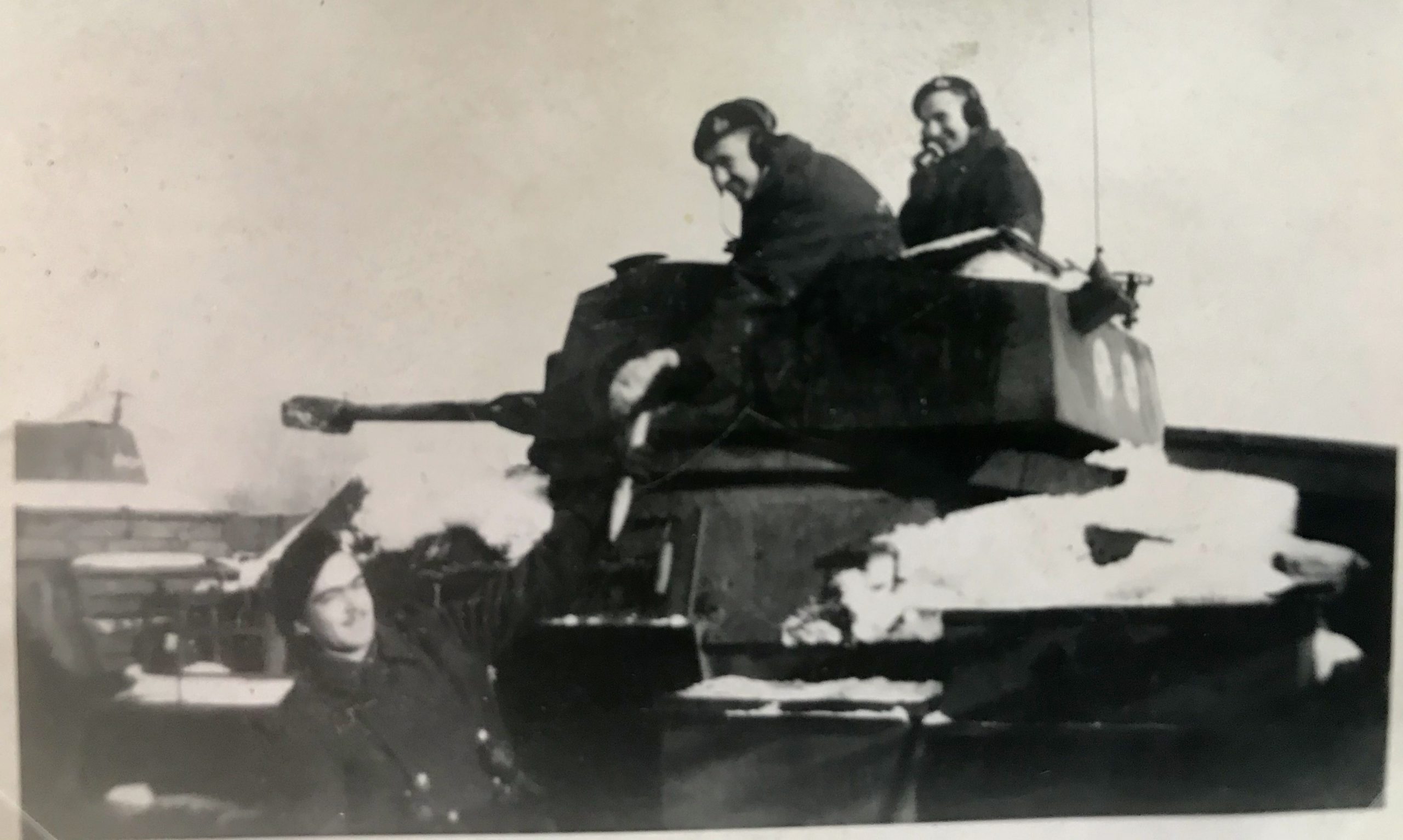 For most of the rest of his life Dad did not talk about his experiences but in his last decades he did write some of it up and shared some of his stories. He certainly witnessed things that never quite left him. In addition, his mother and sister, my grandmother and aunt were bombed out of their two room flat in Peabody Buildings in Pimlico out while he was serving overseas. A V2 hit the block while they were asleep down the Underground. Dad was a member of the British Legion and he wore a Poppy on Remembrance Day but he never felt the need to hang the St George’s Cross from our rooftop. The fact that I do not support hijacking VE day to align people behind the specific Tory political agenda of Brexit style nationalism does not mean I am not proud of my country’s role nor of my own father’s within it.

I do however, reject the narrative that it was a kind of Caucasian British super race that stood alone against the might of the Nazi oppressor. The UK press has hardly made mention of the role of the Soviet forces and the horrific losses endured by that population. It also sees fit to minimize the role of the people of the Empire as the British and Allied forces were bolstered by many hundred of thousands of men and women who flocked to fight and labour in the service of their King. However, highlighting that point would be counter to the narrative of the ‘we stood alone’ storyline as we are busy withdrawing their citizenship and the right to remain in the country they fought for. The Polish Centre just along the road from me was daubed with abuse doing the Brexit campaign but that Centre was funded in recognition of the role and sacrifices of the Free Polish. In fact, that same aunt of mine married a Polish soldier and they emigrated to Canada to start a new life. ** The Windrush Scandal is just part of the denigration of people from African, Caribbean and Asian descent that has risen from the Pandora’s box of the Brexit driven rise in racism. The very people who are now, to use the militaristic jargon so loved by Johnson and his cohorts, are manning the ‘Front Line of the war Against Covid-19’ and dying for their efforts.

So, Mr Ancona, it is not the respecting of VE day I am rejecting, it is your jingoistic version of it. A sober reflection of a conflict against tyranny is one thing. A politically inspired faux nostalgic celebratory revel (I am not even starting on the idiocy of street parties at a time of apparent Covid physical distancing) to entrench the notion of an Farage-style Brexiteer little England, is another. What’s next, the renaming of Christmas as Agincourt day?

So, to genuinely honour some of those people who also fought against fascism I offer you a few images that seem to be under represented in the main stream media. I did cover the role of the pre-partition Indian Army in both WWI and WWII in my blog about the annual Chattri and my mate Dhill’s work to maintain it.

Please take a moment to have a look at that piece. I am not sure what plans there are in place this year but I will share them once I know. Meanwhile, I did come across this image. 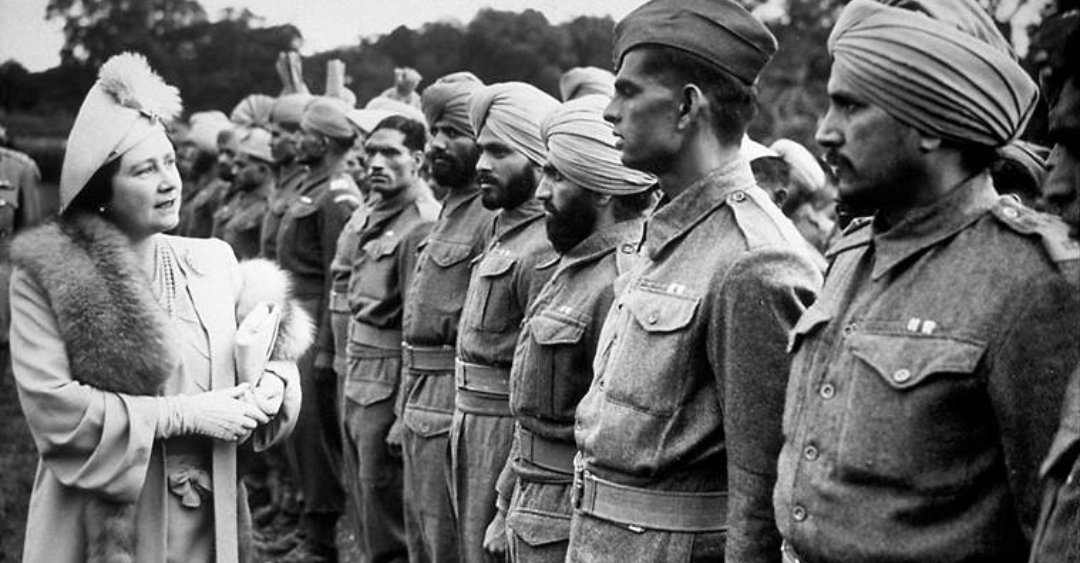 During WWII a great many African soldiers took an active part. There is a narrative postured by some that African troops were just porters or labourers while the ‘real soldiers’ got on with the fighting. That is palpably untrue. African troops were fully engaged in operations in the Middle East, the Horn of Africa and on the front line with the Chindits in Burma (now Myanmar). My brother from another Mother Ed Keazor and his wife Muni have made a film about just this very topic. This particularly honours the Royal West African Frontier Force and details several servicemen that received citations and honours including the Military Medal. Above all it recognises that a million Africans fought in WWII of which 126,000 were Nigerian and 15,000 African soldiers died. In addition, 30,000 African seamen died keeping our supply lines open. Many of these men were given a meagre lump sum (and four times less than equivalent white soldiers) and returned home pension-less to live in poverty and without recognition. In several military cemeteries in East Africa black colonial troops were actually buried outside the perimeter and not inside the cemetery proper with their white officers and only white people are named as individuals on many African colonial war memorials. Ed found a lost recording of Nigerian soldiers singing on the march in Burma as well as other archive footage and pictures that enabled him to make his film “Company Yaya – Lost African Voices of WWII”. I offer you a couple of images from Ed’s film and a link to the trailer. Once Covid shutdown is eased I know Ed and Muni plan some screenings. If you are interested please let me know so I can contact you once plans are in place. 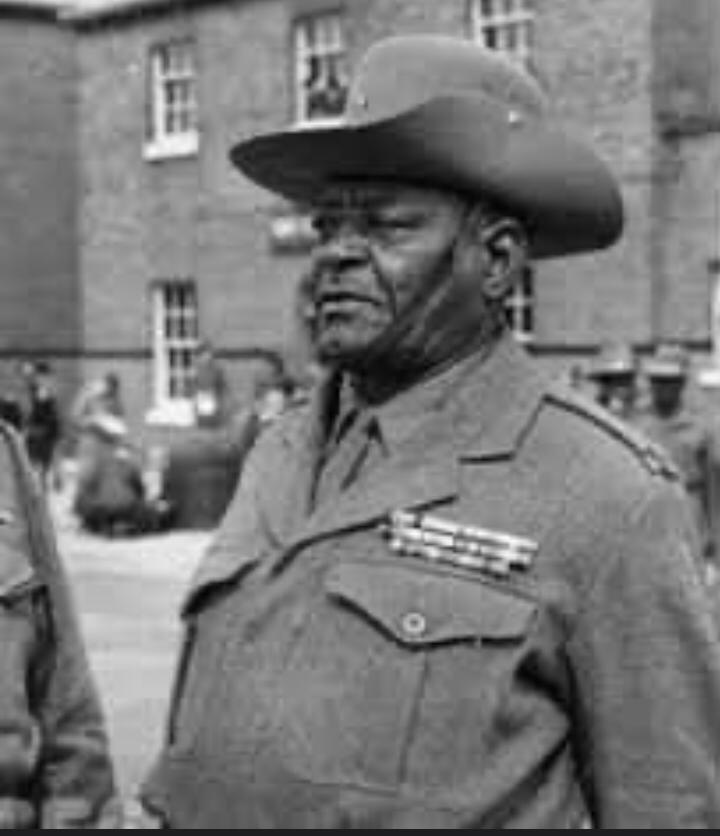 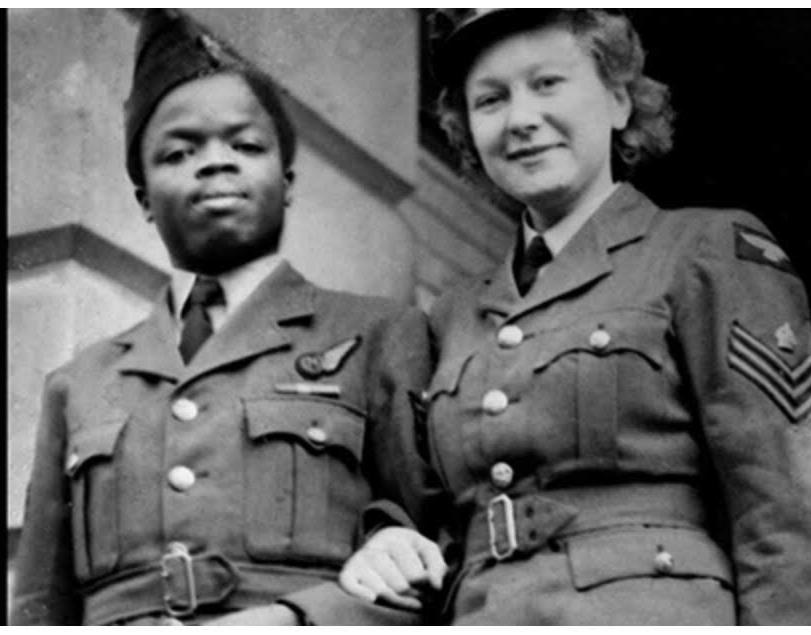 The header photograph is of an un-named private of the Nigerian regiment in the Kaladan valley, Burma in 1944.

You can watch the trailer here –    https://www.youtube.com/watch?v=aKd6Bsc4RPI

Finally, here is a link to an article in today’s Guardian concerning an East African soldier that highlights the same issue.        https://www.theguardian.com/global-development/2020/may/10/you-are-still-a-soldier-to-me-the-forgotten-african-hero-of-britains-colonial-army

So, again, Mr Ancona and others of your ilk. I do not reject the memory of that conflict nor of the need to keep a flame burning. I do reject a specific type of celebration that excludes those that do not fit a particular narrative. I think we should be focussing on celebrating those whose parents and grandparents fought alongside ours and who are increasingly marginalised in our society yet are dying disproportionately in the current struggle against this Virus. I reject the notion that to be patriotic I need to drape myself in a flag, ignore the negative elements of my nation’s history and only applaud the positives while denying the contribution of people of other religions, ethnicity, sexuality or colour to a modern Britain. I want to build on the past, learn from the mistakes while looking to the future, not wallow in it.

I do not feel I have an appropriate vinyl today.

**In fact, I wrote this one evening and into the next day.  that evening I received news from my Cousin Janet in Vancouver that Auntie Pat passed away on VE day itself.  RIP Patricia Karch Nee Richards.  this is her in 1949 from her brother, my father’s records (which I am tidying up as part of my Covid activity. 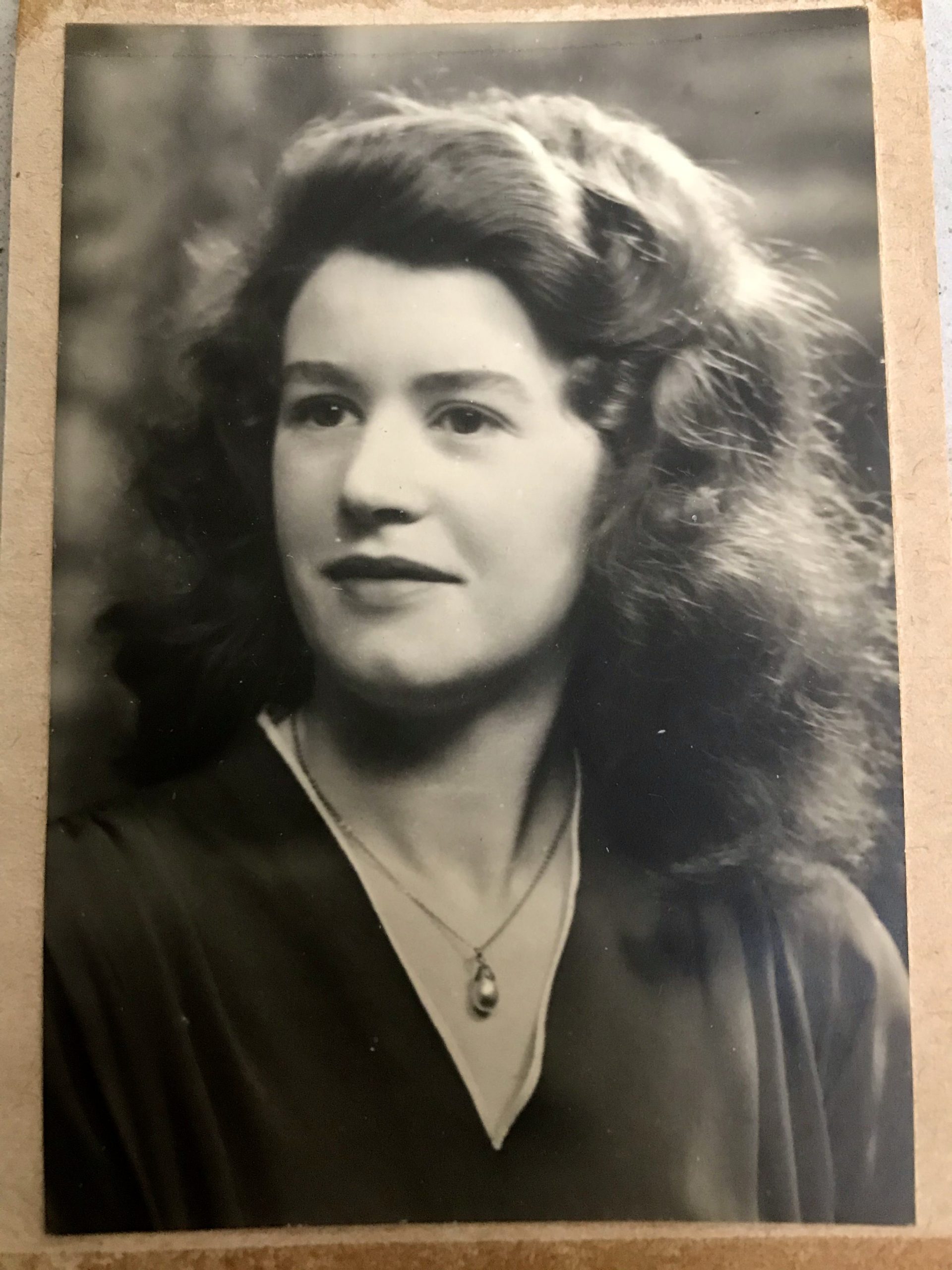