Today’s is a simple blog, more or less about a single album. Somehow, this music should not be tacked on to a rant or a piece about a virus. Strangely, though I would rate this as one of my top albums and it is one of the two or three most influential albums in my personal musical history, I very rarely play it. I find it too emotional. In fact, I have put it on as I write this and tears are already welling up in my eyes.

Joni Mitchell’s “Blue” picks me up physically and dumps me back in time like no other. I was eighteen when it came out in 1971 but I don’t think it really captured my imagination until I started College in Brighton two years later. In my head it is always playing in rooms full of old friends, student houses particularly the girls’ and then of couples as we formed maybe our first adult relationships. These were times of intensity as some couples went on after the student days to be married and have families, while others split up and moved on. I guess, as we were forced to grow up, it became a kind of anthem to the erosion of idealism so over the years that followed I tended to return to it at moments of reflection. It is the simplicity and heart breaking honesty of so many of the songs that makes it so raw. In fact, in 1979 Mitchell reflected in a Rolling Stone interview, “The Blue album, there’s hardly a dishonest note in the vocals. At that period of my life, I had no personal defenses. I felt like a cellophane wrapper on a pack of cigarettes. I felt like I had absolutely no secrets from the world and I couldn’t pretend in my life to be strong. Or to be happy.” 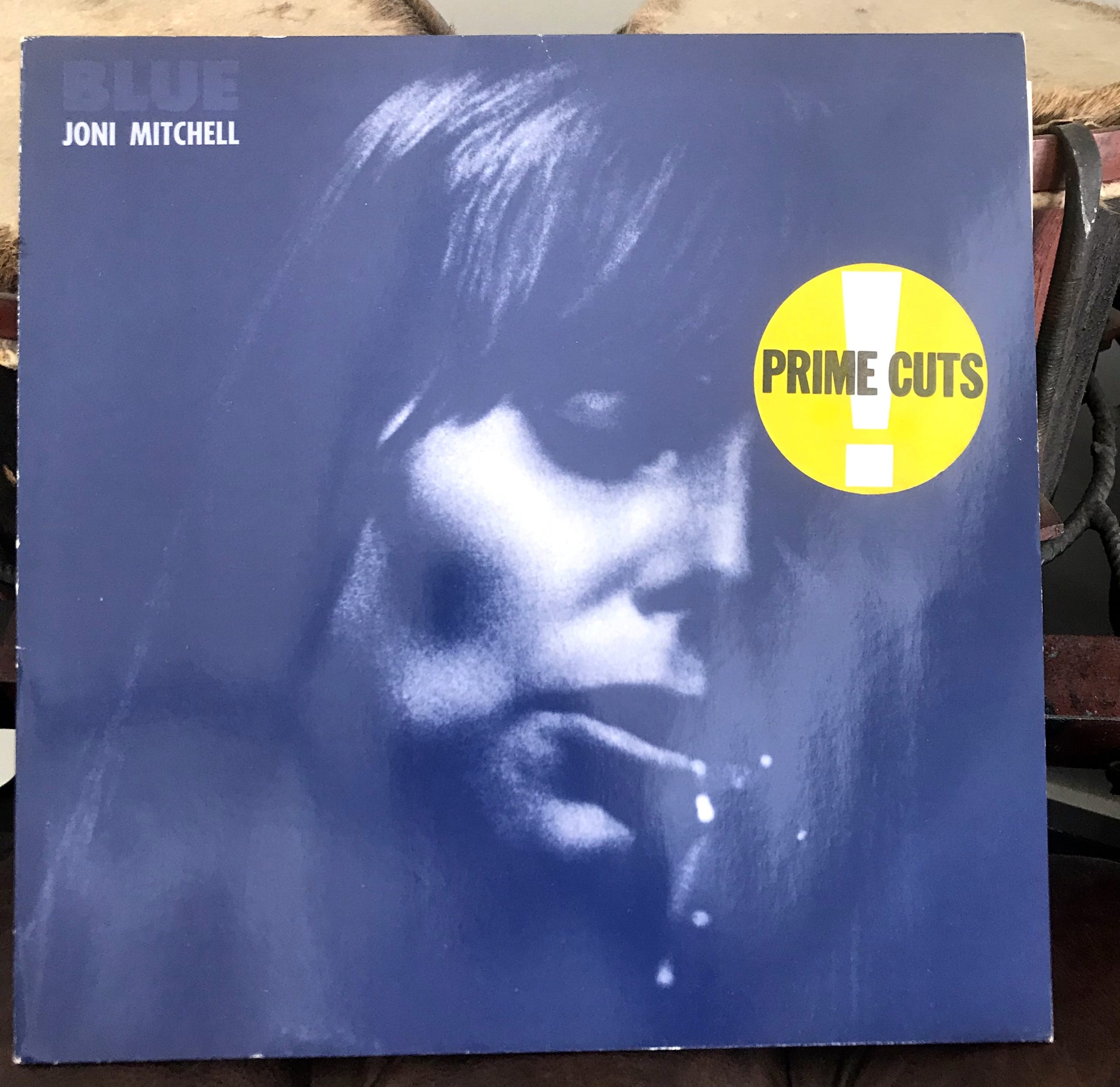 I had a copy in Brighton but this one was bought later – hence the ‘Prime Cuts’ sticker. The album reflects a period in Mitchell’s life when, post Woodstock, she felt the need to escape fame and come to Europe. Several of the songs consider the need to give up her sojourn, often in hippy style beach camps such as the one on Matala in southern Crete, and return to a life of recording studios, tours and record companies.  This struck a chord, as these were the days when everyone hitched around Europe and it was easy to sleep on beaches or in cheap campsites. Some of my friends had actually stayed on that beach at Matala when it was still a few habitable caves and maybe a couple of taverns.   Now, of course, it is full of hotels and package deals.

The wind is in from Africa
Last night I couldn’t sleep
Oh, you know it sure is hard to leave here Carey
But it’s really not my home
My fingernails are filthy, I got beach tar on my feet
And I miss my clean white linen and my fancy French cologne.

Come on, Carey, get out your cane
I’ll put on some silver
Oh you’re a mean old Daddy, but I like you

Maybe I’ll go to Amsterdam
Or maybe I’ll go to Rome
And rent me a grand piano and put some flowers ’round my room
But let’s not talk about fare-thee-wells now
The night is a starry dome.
And they’re playin’ that scratchy rock and roll
Beneath the Matalla Moon

Apparently, Cary (Not Carey as named in the song) was a real person who cooked at the Mermaid Café and had long red hair that he would wear in a bandana (“bright red devil”) and he would sport a cane as an affectation. 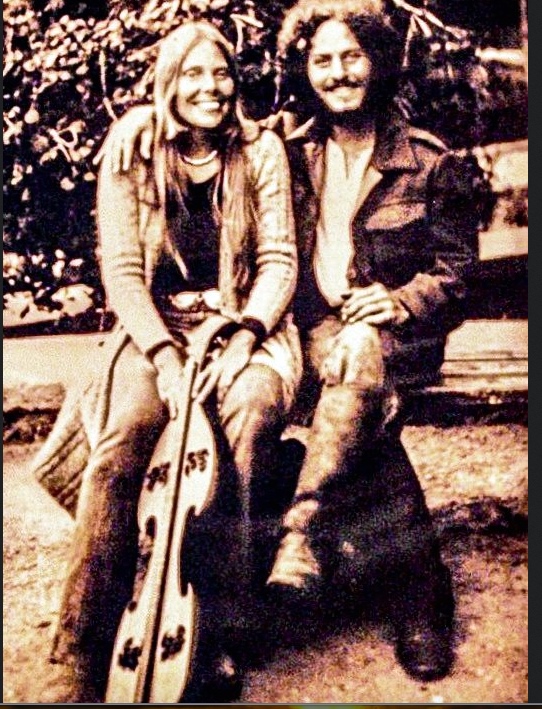 Joni Mitchel with the real Cary in Crete. Note the dulcimer and look out for it in You Tube clips of the period..

Another of the recurring themes concerns the ending of relationships, particularly influenced by her split with Graham Nash. The songs “River” and “My Old Man” are said to be about him. The last two lines of the latter’s chorus are worthy of Leonard Cohen at his most spare yet bleak.

But when he’s gone
Me and them lonesome blues collide
The bed’s too big
The frying pan’s too wide.

My two favourite tracks have lyrics that speak to me as directly now as they did back then. “A Case of You” is for me such a poignant song and, as someone who enjoys bars and pubs, has always spent time in them and intends doing so again as soon the bloody virus allows, the concept of love as inebriation hits home. The words portray life’s, indeed love’s, contradictions – bitter vs. sweet, pain vs. love, light vs dark.

Oh, I am a lonely painter
I live in a box of paints
I’m frightened by the devil
And I’m drawn to those ones that ain’t afraid

I met a woman
She had a mouth like yours
She knew your life
She knew your devils and your deeds
And she said, “Go to him, stay with him if you can
but be prepared to bleed”

Oh, but you are in my blood
You’re my holy wine
You’re so bitter
bitter and so sweet
Oh, I could drink a case of you darling
still I’d be on my feet
I would still be on my feet”

Yet none of these words would have touched me were it not for the first verse that precedes them…….

“Just before our love got lost you said
“I am as constant as a northern star”
And I said, “Constantly in the darkness
Where’s that at?
If you want me I’ll be in the bar”

……….because the conflict, the contradiction that we were battling then as young adults was that of idealism and romanticism versus that of the real world, going out to get a job. From the poetry of her lover’s ‘constancy’ she moves prosaically to the bar, which is where I would go in the same circumstances.

This theme is even stronger in my absolute favourite track “The last Time I saw Richard”. That battle, the optimism and romanticism of youth vs, the real world and the cruelty and pessimism that can come with it, was what we were going through and that’s why ‘Blue” struck such a chord. The fear of giving in to Richard’s fate became one of the driving forces of my life. The fear of losing that battle is what keeps me writing today: prose, poetry and even this blog. And the tear that wells up whenever I play this album? It’s for the knowledge that I did have to give up that idealism, that belief that love can conquer everything. It’s for those souls I saw dried up by negativity, doubt and the death of compassion. It’s for the loss of Innocence. Finally, It’s for the gratitude that I still have friends who will join me in that bottle in dark cafes, dark bars and dark pubs and so I don’t feel alone.

“He put a quarter in the Wurlitzer
And he pushed three buttons and the thing began to whirr
And a bar maid came by in fishnet stockings and a bow tie
And she said, “Drink up now it’s gettin’ on time to close”
“Richard you haven’t really changed,” I said,
“It’s just that now you’re romanticizing some pain that’s in your head
You got tombs in your eyes, but the songs you punched are dreaming
Listen, they sing of love so sweet, love so sweet
When you gonna go get yourself back on your feet?
Oh love can be so sweet, love so sweet.”

Richard got married to a figure skater
And he bought her a dishwasher and a coffee percolator
And he drinks at home now most nights with the TV on
And all the house lights left up bright
I’m gonna blow this damn candle out
I don’t want nobody comin’ over to my table
I got nothing to talk to anybody about
All good dreamers pass this way some day
Hidin’ behind bottles in dark cafes, dark cafes”.

So here is the original, simple.

For ‘Case of You’ though I have not chosen a version by Joni Mitchell herself.  In the last few years she has suffered from poor mental and physical health, however, last year she was able to attend a 75th birthday concert when a number of her contemporaries and some younger artists sung her compositions in her honour.  It is worth watching though some are better than others.  However, I found this one song particularly moving.  Kris Kristofferson has Alzheimer’s and struggles a bit trying to sing ‘A Case of You’ but Brandi Carlsle supports him sympathetically.