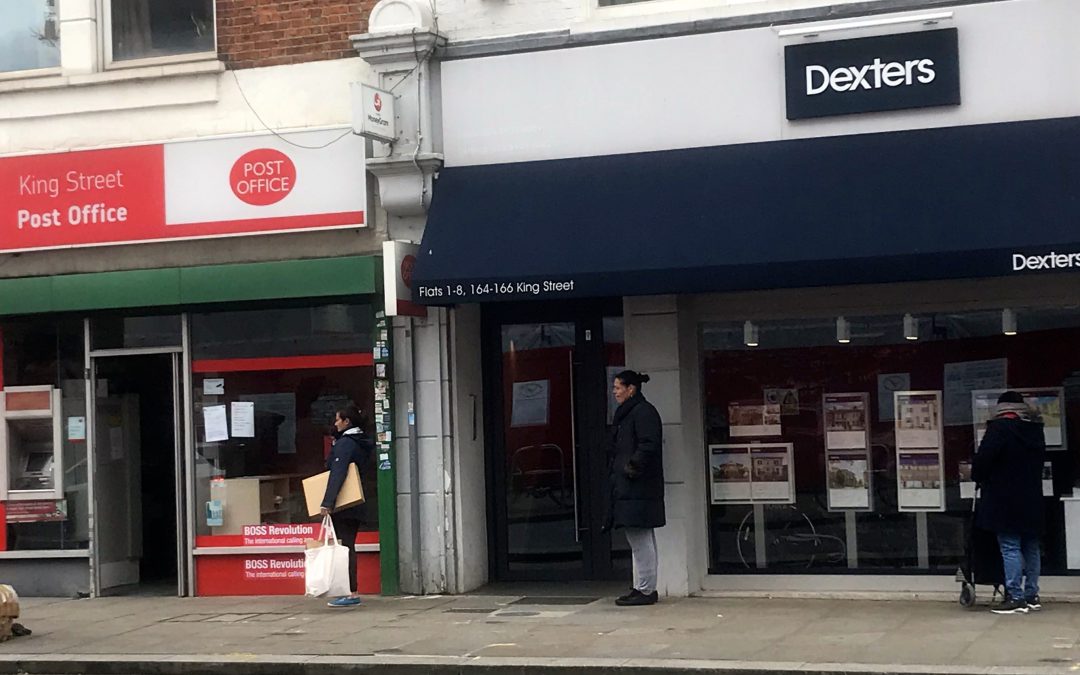 “The man who cannot visualize a horse galloping on a tomato is an idiot.”

I popped out for ‘a few bits’, as they say, and thought I would walk up King Street to Istanbul. What a great line! Anyway, anyone who has been reading these blogs regularly would know it is one of my regular shops within my theme of great local places that also have proper social distancing queuing arrangements outside. They also have their own bakery making various Turkish breads and pastries, which is very dangerous for my waistline so that as I write this I am feeling pretty blown out and guilty for having completely buggered my healthy eating regime for the day.

Anyway, the main point for mentioning this was to show that the Post Office on King St has re-opened and is maintaining appropriate queuing. Give the guy that runs it, Ash, his due – his notice when he shut stated that he would re-open on 27th and that is what he has done. Frankly, the man is a star!

This is now the nearest Post Office to the whole of East Chiswick to be available. However, can you believe it, as I walked past, some clown in the queue was declaiming loudly for all to hear “this is bloody ridiculous blah blah blah…?” I mean, is it just my imagination or is there a professional arsehole association assigning arseholes to queues to maintain the National Arsehole Quotient? *

While, I am in the “is it just my imagination or …….“ vein can I just ask, slightly more seriously, is it just my imagination or are people beginning to lose the enthusiasm for ringing people to check on them or even for the Virtual call? I detect in myself some form of ‘communication fatigue’. After all a weekly call would normally have some new news but now my usual conversation topics like who I have seen, recent gigs or theatre or restaurant trips have dried up. There are some who still endlessly want to discuss the latest conspiracy theory, the latest piece of government non-briefing or conjecture a date for ending the lockdown but I for one just switch off once these topics come up. In addition, is it just my imagination or are other people finding themselves responding emotionally to random pieces of television that they would never had before the lock down? I mean, if it gets any worse I will start moisting up at toilet roll adverts! **

These questions lead me to possibly my excruciating segway into a Vinyl cover yet ….

There are options here. The first version of “Just My Imagination (Running Away with me)” was The Temptations’ glorious 1971 version that was a hit all around the world. However the version that I am thinking of is the one by The Rolling Stones from the 1978 ‘Some Girls’ album. There is more than one link here. Before I talk about the cover we can consider ‘The Stones’ as ostensibly a local band. Though they come from disparate parts of London their first gigs were predominantly in this area, particularly at Alexis Korner’s Ealing Jazz Club on Ealing Broadway where some of the band jammed with ‘The Blues Incorporated’. In fact, according to Wikipedia that is where “Charlie Watts first met Brian Jones then, on 7 April 1962 Alexis Korner introduced Mick Jagger and Keith Richards to Brian Jones, and the nucleus of the Rolling Stones first came together.” Thereafter, their first regular stint was as the house band of ‘The Crawdaddy Club’ at the back of Richmond’s Station Hotel. In addition they have a history of recording in local studios, particularly at the Olympic Studios in Barnes. Their first single ‘Come On’ was recorded at Olympics original studios in central London as they didn’t relocate to Barnes until 1966. Some albums have been mixed right under where I am sitting now, in The Power House above Metropolis Studios. Their most recent album, 2016’s ‘Blue & Lonesome’ was actually recorded in Chiswick in British Grove Studios owned by Mark Knopfler and managed by producer David Stewart who passed away tragically a few days ago of Covid-19. By all accounts he was a genuinely popular bloke as well as having a strong professional reputation and leaves a young family. Very sad. I am told, and have been unable to verify, that British Grove somehow acquired the recording deck from Ginger baker’s old studio in Lagos. If this is true (see My Corona Blog XXIII) that is quite a coincidence. 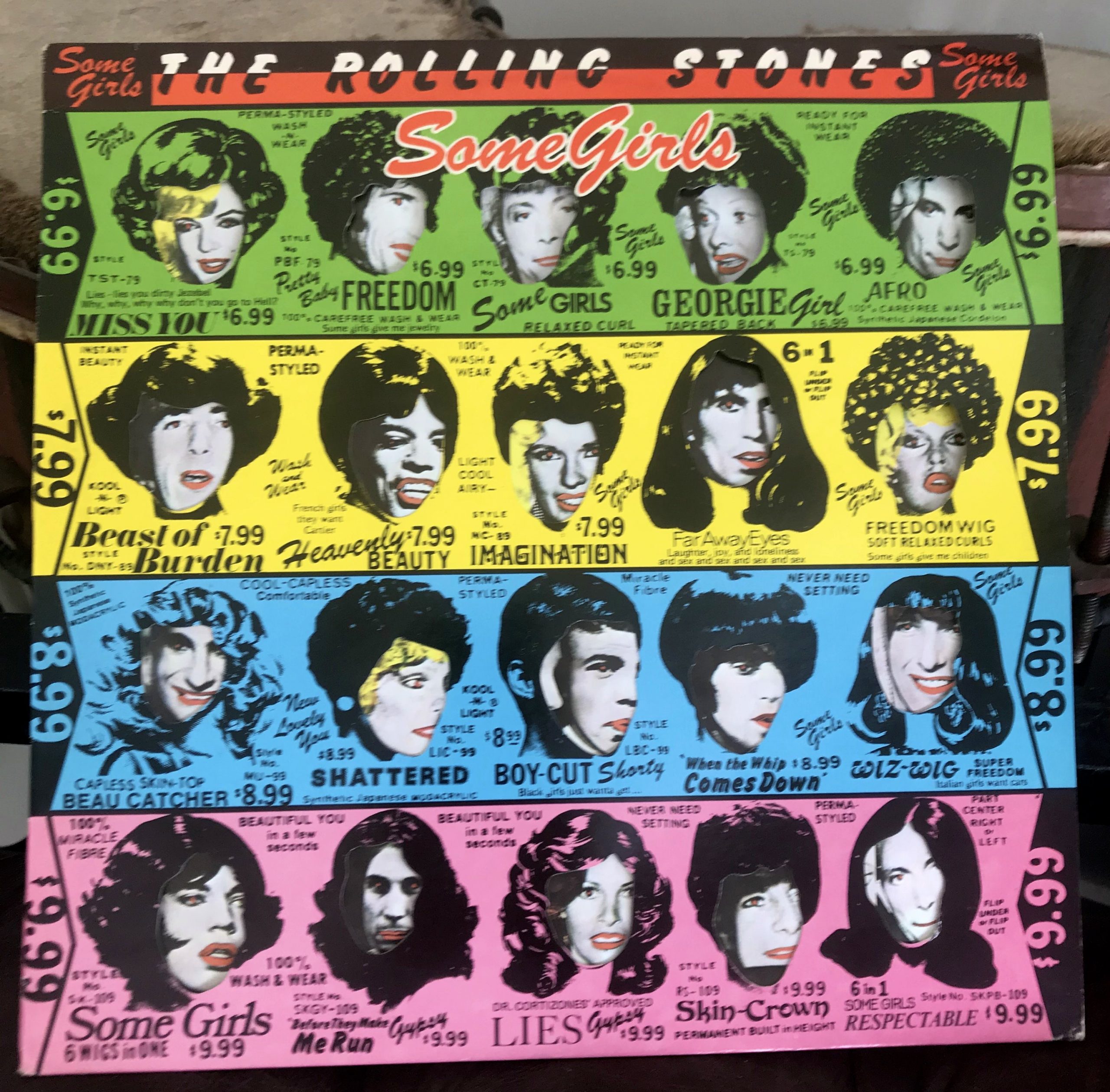 In the middle of the ‘70’s the Stones kind of lost their way and their releases during that period are considered some of their most lacklustre. During this period Mick Taylor, arguable the finest straight guitarist to have played with the Stones, left the band. Keith Richards was at the peak of his drug years and distracted by several court cases, most notoriously in Canada where his penalty was to arrange and play in two fund raising concerts, which he did for the Canadian National Institute for the Blind. Ronnie Wood did not join the band as a full member, despite playing on tours, until the recording for this album. I saw them at The Earls Court in May 1976 and was pretty disappointed having previously seen them at the famous Hyde Park concert in 1969. However, ‘Some Girls’ was a return to form. Mick Jagger, having spent much of the previous few years in New York, was hugely influenced by that city’s dance scene and both the lyrics and the funkier rhythms reflect that. I think the album has some of his best writing. The only song not written by Jagger and Richards was ‘Imagination’. Four songs become Top 40 singles in the UK or the US: ‘Miss You’, ‘Beast of Burden’, ‘Respectable’ and ‘Shattered’. In addition, the album coincided with a particular time of my life when I was still living in Brighton and had recently become single again and was pretty aggressively partying ………and it was a great album for partying! (Though a completely different sound but a contemporaneous boogieing party album/soundtrack during the same period was the Bee Gees, ‘Saturday Night Fever’.) Reading the lyrics as I write this now is to be struck by the strength of the composition. The lyrics are particularly forthright and occasionally subversive. Check these out from ‘Respectable’.

The Lyrics of ‘Some Girls’ were considered controversial at the time and accused of advocating racial stereotypes. Even Atlantic Records asked Jagger not to include the song on the album. Only a band as strong as the Stones could afford to ignore the Label’s request and only Jagger and Richards arrogant and bloody minded enough to then make that song the name of the album. Over the years, the track that has stuck as my favourite is ‘Far Away Eyes’. The Stones were long influenced by country music: their friendship with the late, great Gram Parson has been well documented. It also reminds me of my year in North Carolina in 1972/’73 when the airwaves were full of country and Christian radio stations. The lyrics show their irreverence but not unsympathetically and Ronnie Woods’ Pedal Steel Guitar is a highlight on this and several other tracks on the album. Apparently, the girl who could be found “sittin in the corner/A little bleary, worse for wear and tear” was a real person! There was an official video of the track made that displays the intelligence and humour of Jagger’s performance, Wood’s pedal guitar, the languid and sardonic backing of Wyman/Woods and a strangely distant Richards.  https://www.youtube.com/watch?v=VyK1bZZ7E-s

Finally, I leave you with the song’s suggestion for the male of our species that I am sure can be transposed for females during these ‘disjointed times’ though you will have to wait until the pubs re-open.

* Oooh, that’s a bit grumpy, are we feeling the strain? Ed.

** No, before you ask I haven’t. Anyway I am a member of the paid up ‘Chiswick witterati’ so I never watch commercial television – except maybe on catch up. Yeh right ……. ! That’s enough jokey side conversations now. Ed.