“Poetry is what in a poem makes you laugh, cry, prickle, be silent, makes your toe nails twinkle, makes you want to do this or that or nothing, makes you know that you are alone in the unknown world, that your bliss and suffering is forever shared and forever all your own.”

I have had quite few messages in response to my more direct pieces about the toppling of the Colston statue and the Black Lives Matter movement, mostly though not exclusively from my Black and other Ethnic Minority friends and all strongly in support. Talking to my white friends there is clearly less widespread agreement with the statue taking a dip. The split seems to be age-related as it is clearly younger people more in favour of direct action. Certainly, my Social Media feed is full of “I agree in principle but…….”, to questions from, “Is Churchill next…..?” all the way to “Moslems had slaves so why don’t we pull down Mosques too?”. Still, let’s be realistic and recognise there are plenty of African-Americans who vote for the Tangerine Tosspot and large numbers of Nigerians (on my FB feed anyway) who are big fans of that very same carbuncle. So, clearly, reason and logic do not always seem to play a part in these conversations. In fact, people will often respond before they have even read the whole of the post or blog about whatever is that they are complaining of. This is actually all part of what many of my BAME mates complain: that their white friends don’t actually think more than superficially about the subject unless it directly effects their entitlement. (And won’t agree they are entitled too, often.)  Nevertheless, one of the over-ridingly positive things happening, talking from a UK perspective, is that there are more conversations on this topic taking place than there have been for Aeons and many more folk have been forced to look at things from a different perspective. We still need to do more, however. I have been trying to find the exact numbers but I remember reading recently that well over 90% of people in Britain have never actually been to the home of a person of a different ethnicity than their own. Let that one sink in.

Of the responses I was sent, I am just going to share just one. A great friend of mine Kadaria Ahmed sent me a copy of the poem that she wrote when she was struggling to sleep the night after the shocking pictures of George Floyd’s murder were broadcast. Kadaria is a Nigerian journalist and broadcaster. After her studies in Kano, she came to do her Masters in television at Goldsmiths and then worked at the BBC. I met her after she had returned to be the Editor of Next newspaper where she displayed genuine courage by taking on the Nigerian political establishment. Not something to be done lightly in a country where journalists have been blown up by parcel bombs for affronting an incumbent regime. After that, in 2014, she co-created, produced and presented ‘Straight Talk’, an interview programme designed to probe and confront that same establishment. She has also anchored Nigeria’s Presidential TV Debates. As a woman with a Northern Muslim background she has broken many moulds. There have been times when I wanted to know something that might be sensitive or culturally awkward and since I have known her Kadaria has been my go to person. Ready to provide a straight answer. She is currently setting up a Public Service radio station, has an active current affairs Podcast and her company, Daria Media, funds journalism scholarships for women, among other things. She also Chaired the Launch of my last book with Professor Soyinka.

My chest rises and fails

I know without air in my lungs

I am going to die

I inhale but there is no air

I suck harder but my chest is tight

My heart is racing and I am terrified

The knee crushing my windpipe is

It belongs to hands that put me in chains

And forcefully crossed me, across the seas

The same hand that tossed my brothers

Overboard and watched them thrash and

They were too weak from the infection

Foraged deep into the wounds, from the chains

Around their legs and the stockade around

And even though I didn’t know it then, I

Came to realise they knew they would not

Survive the cotton fields and so were useless

The pressure is too crushing

And no matter how hard I try my lungs

Thrust itself between my sister’s legs, brutally

Raping her although she was just a child.

Her haunting cries on the ship I hear in the

Distressing voices that are faintly audible,

Horrified by my lynching in broad daylight

As the light dims, and the descent begins, I

But I can’t breathe.

I am Emmett Till, Tamar Rice, Michael

I am Eric Garner, Aaron Sterling,

And they are going to kill me again and again

I have stopped breathing and I know I am dead but

Somehow I know they will murder me again

And so they can. 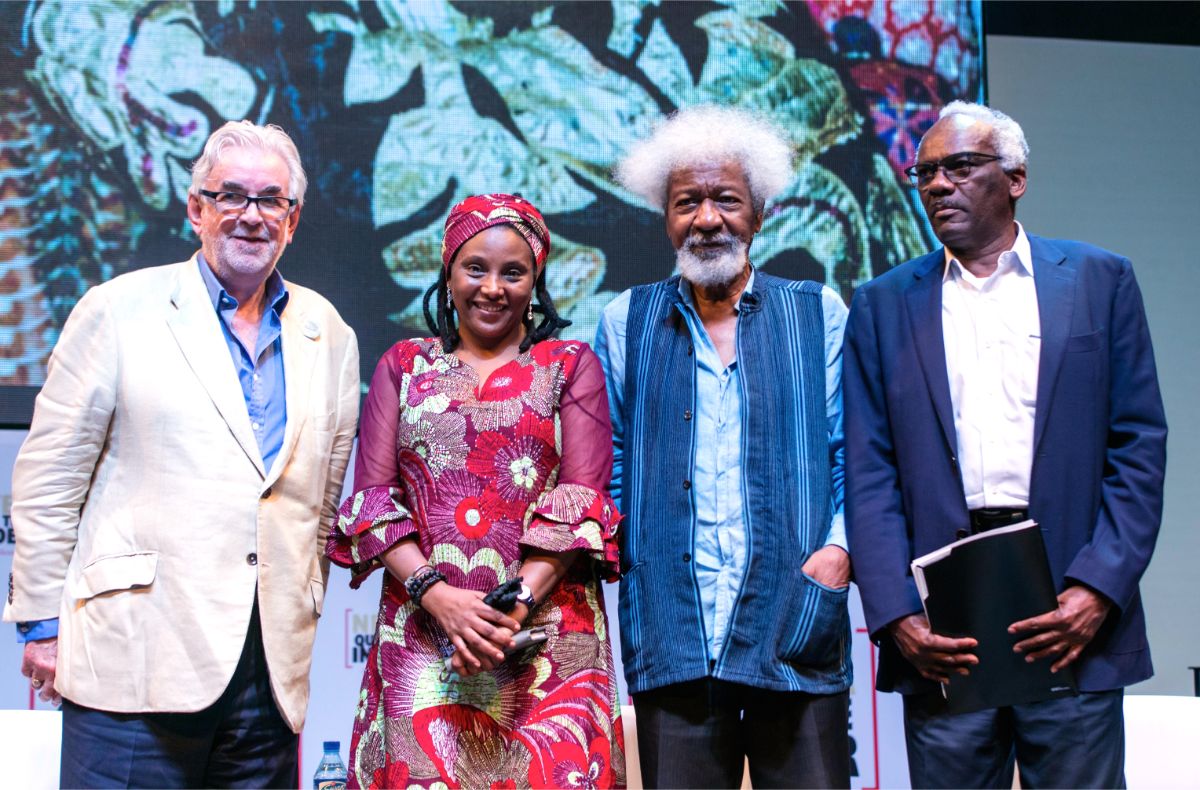 After My Book Launch, with Kadaria and Professor Soyinka and Bankole Olayebi who was the person who introduced me to Niyi Osundare – see yesterday’s Blog.