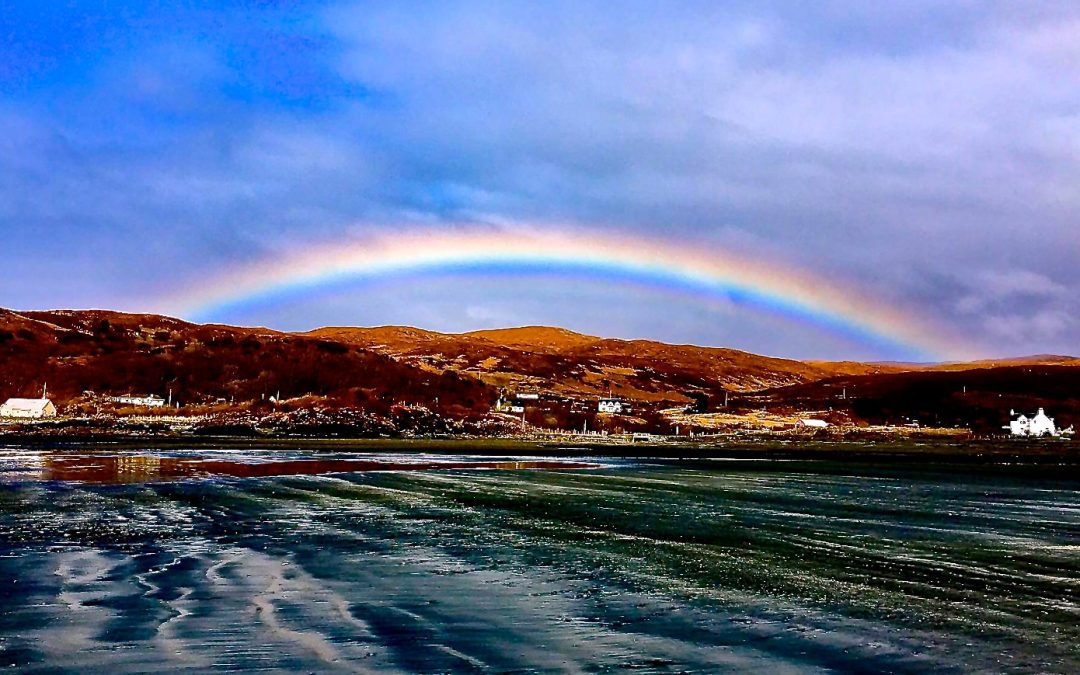 In which your hero wishes you the best possible Easter Monday

“Be a rainbow in somebody else’s cloud.”

Scientists and doctors agree that the immune system responds encouragingly to a positive state of mind. I am no scientist ** but according to ‘www.dumbsimplifiedplacebos4dumbsimplepeople.org’ *** certain positive actions release the chemical neurotransmitters Serotonin and Dopamine in the body. These help trigger feelings of well-being and calm, and positivity and motivation respectively. Much of the research that supports this view highlights the kind of positive actions and it includes listening to music and eating dark chocolate. What better news could you have on an Easter Monday when you are locked down and trying to feel cheerful? So today’s blog will be about chocolate and music.

My friends who sent the wonderful rainbow from Skye have daughters, one of whom lives round the corner to me here in Chiswick. On Saturday, when I was having my reflective day I received this Whatsapp message that contributed massively to my positivity.

Keith! So enjoying your blog. My housemate has made some truly delicious chocolate Guinness cupcakes, and we wondered whether you wanted to pick up a wee care package on your walk tomorrow? We could have them parcelled up and out on the gate post for a socially distanced chat and handover? X

So, yesterday I made sure my route took me via their house where there was a little package on their gate post and after a bit of a duly distanced natter I made my way home and my little package revealed three perfectly formed chocolate & Guinness cupcakes. Serotonin and Dopamine suitably released I offer them to you against a spring-time skyline. In these days of negativity little acts of kindness and thoughtfulness can make the world of a difference. I was buzzing all day. Thank you, Emily and Lucy. 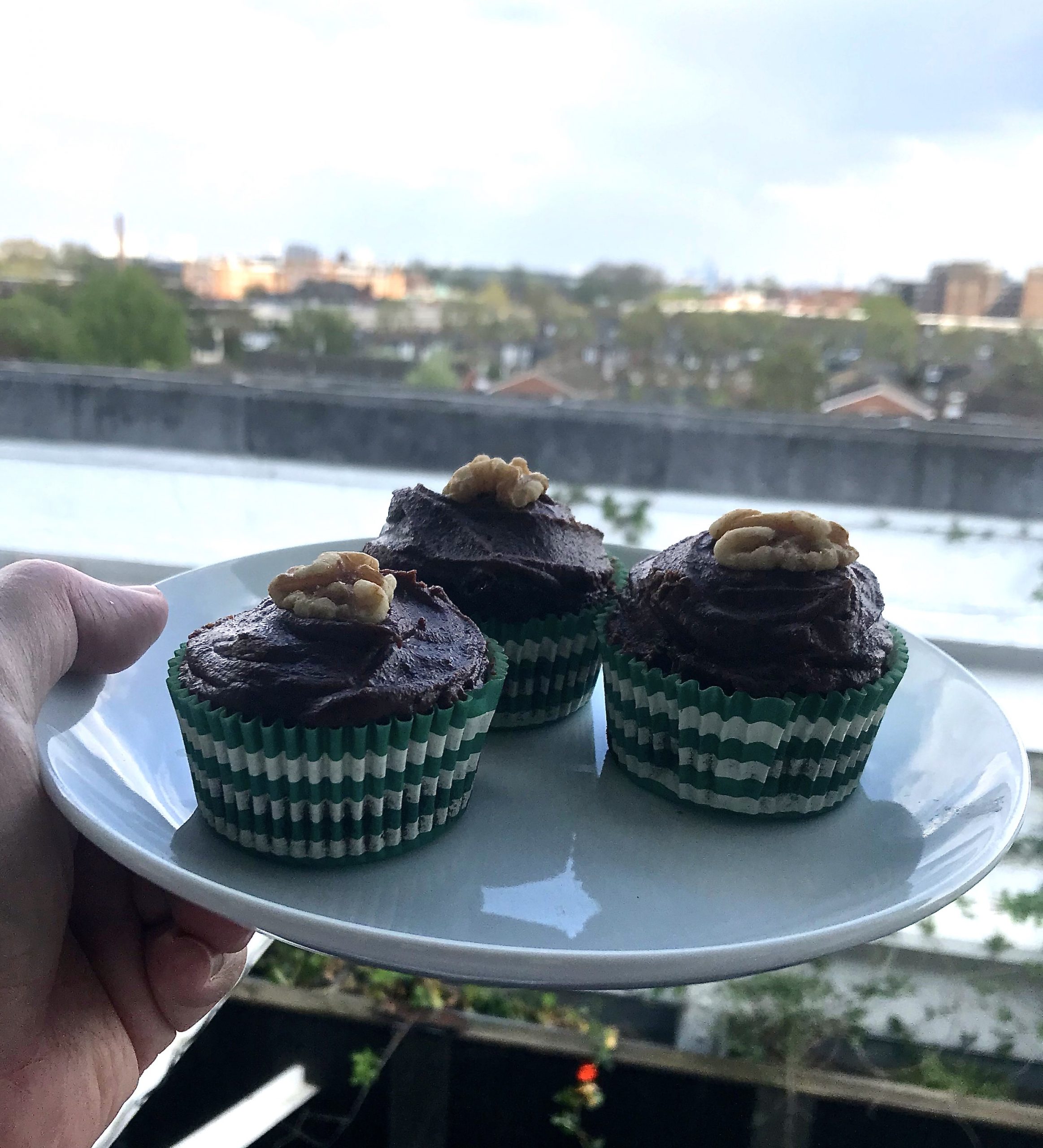 Not to be outdone this inspired me to bake my own confection. This particular combination is particularly helpful for the release of the aforementioned Dopamine. I offer you my own offering on the theme of the day. 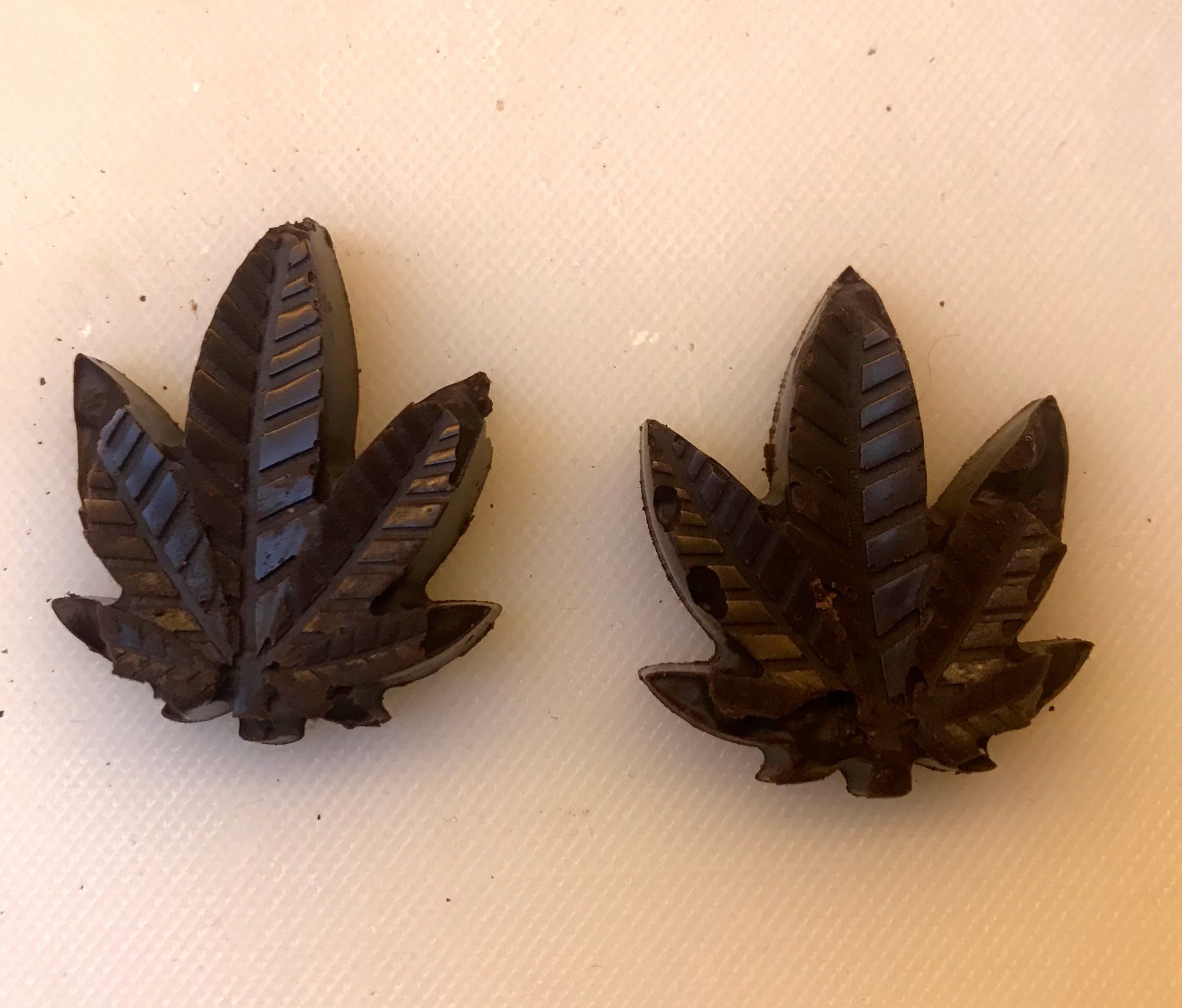 Rainbows and Chocolate – two reasons to be cheerful.

Keeping it light and continuing our theme I give you today’s vinyl offering from the man that brought us ….

“Reasons to be cheerful part 3

Health service glasses
Gigolos and brasses
round or skinny bottoms

Something nice to study, phoning up a buddy
Being in my nuddy
Saying hokey-dokey, singalonga Smokey
Coming out of chokey

Another verse actually provides a little local flavour – at least for some of us of a certain age……….

“Some of Buddy Holly, the working folly
Good golly Miss Molly and boats
Hammersmith Palais, the Bolshoi Ballet
Jump back in the alley add nanny goats” 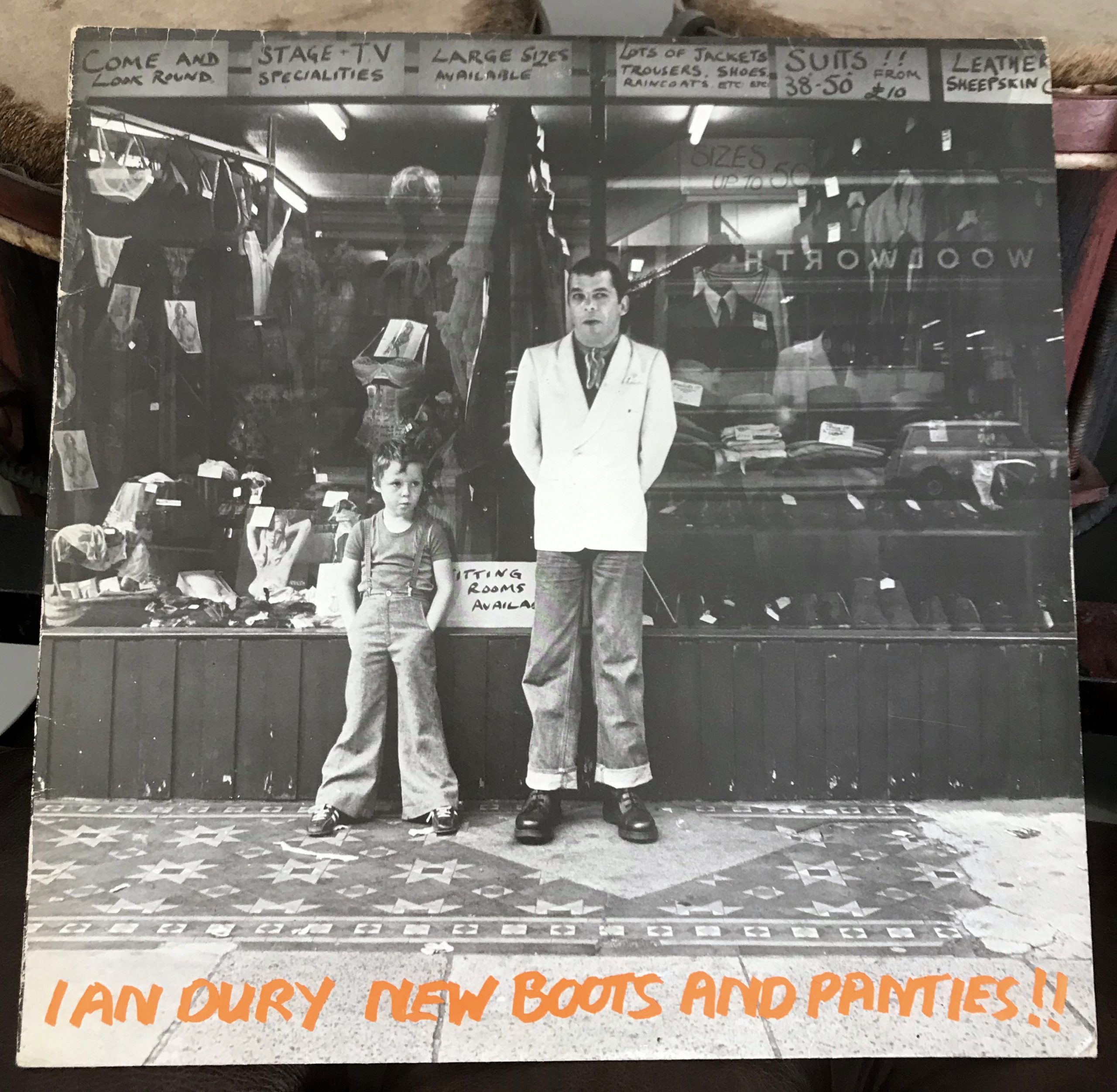 “New Boots and Panties!!” was released by Stiff records on 30 September 1977. I was lucky enough to see Ian Dury & The Blockheads play most of the songs from this album at the Top Rank Suites in Brighton where I was living at the time. It was the 12th of May 1978 and I can remember it because it was Dury’s 36th birthday. He was very drunk and highly emotional on stage – and why not? After his traumatic childhood, health problems and years touring the pub circuit with his old band ‘Kilburn and the High Roads’ he had at last become successful and, ‘fair dooes’, on his own terms with his own irreverent interpretation of east London wit and vernacular. On one level, these are simple songs that are catchy and uncomplicated. Much of the attention rightly comes from the mixture of humour and bathos in Dury’s lyrics. However, what also stands out and is equally part of the signature style of all their albums is the tight driving, almost relentless quality of Norman Watt-Roy’s bass and Charlie Charles drumming. Watt-Roy is still touring with either the Blockheads or with Wilco Johnson and, as one of the great rock bassists is worth going to see in any band in which he plays.

I am leaving you all smiling

At least I am surmising

There’s reason to be cheerful

Without my usual beer full

Good music and some highness

Its tough out there, in fairness

So stay in doors and care less

Reasons to be cheerful – part IIX 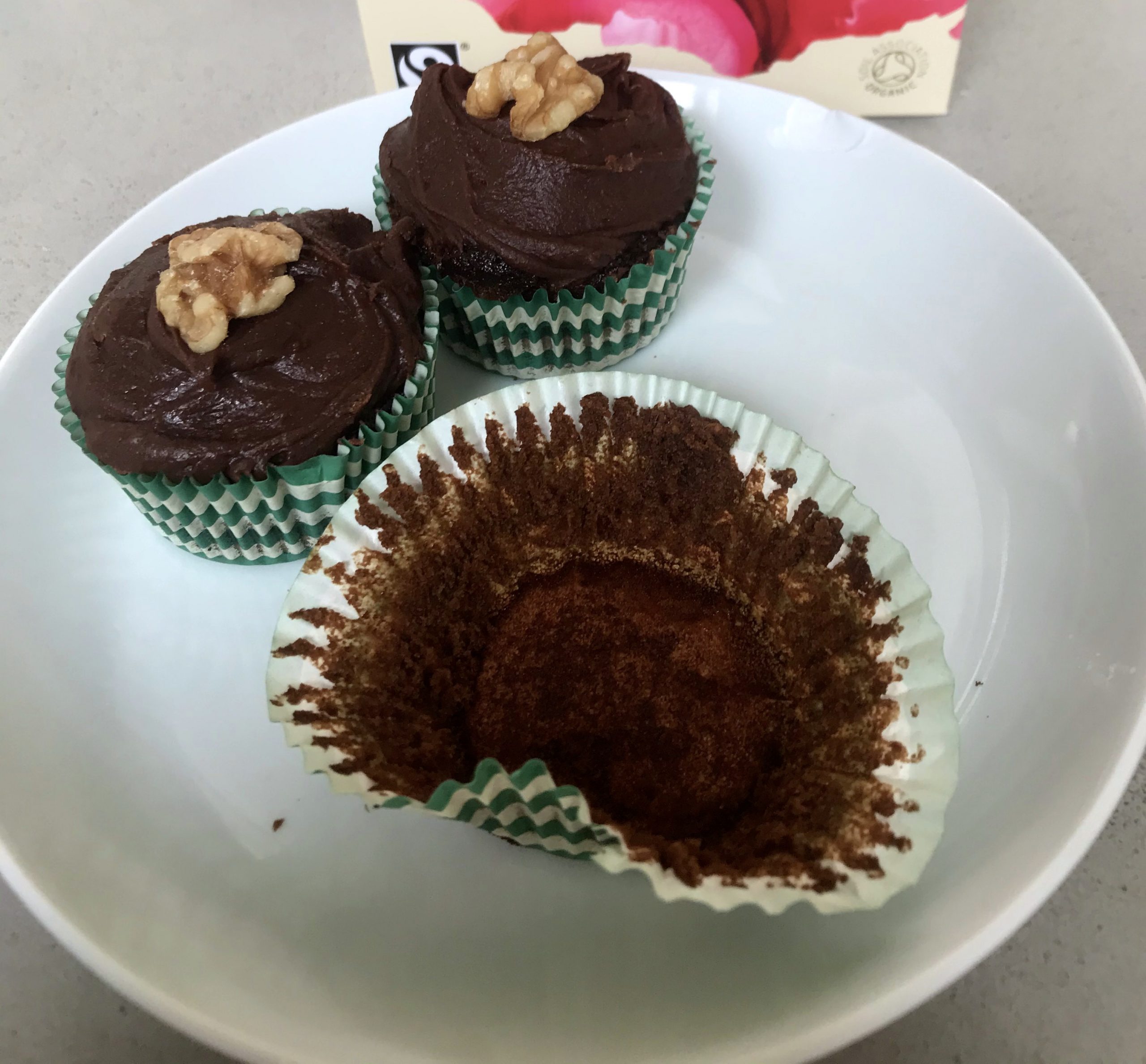 Two more to go………Catch ya laters.

*A Rainbow across the Sleat Peninsular on the Isle of Skye with thanks to Donny Macdonald who sent me this today after his and Bea’s morning walk.