In which your Hero is thinking about the things that are going on.

Most of my Blogs have been about the external reality of Chiswick High Road and surrounding areas or socio-political commentary on some of the potential implications. I haven’t talked much about me but I think if this is genuinely about a ‘confinement’ I should try to be honest about my ups and downs and about coping. I hope it is not just a factor of my inherent narcissism but potentially a means of encouraging readers to both share their own feelings and willing to be there for other people. I believe the modern phrase is ‘being emotionally available”, which is pretty much what is says. Clearly, to be a good listener is to listen emotionally not just aurally.

I am writing this on the warm Saturday evening and generally feeling comfortable and mellow. I am bathed in the righteous waters of self-satisfaction because I did do a few chores, a shopping/exercise walk, which included a couple of very dawdley circuits of Ravenscourt Park, and ate only suitably healthy home prepared salads, topped up with Humus and Tabbouleh from the shop ‘Istanbul’ I have mentioned a couple of times. So – chores, exercise and healthy eating. Perfect. However, there was also pause for reflection during the activity that has taken up my day. As the light on my laptop glows brighter the rest of the room succumbs to a weirdly quiet Chiswick evening. My flat is on the top floor on a block near the bus garage and I have large windows and a view east looking over to the city. Writing this makes me walk over to the patio and look out to the city where I can see The Shaft lit up in blue in honour of the people of the NHS. There would usually be a line of four or five planes, their lights distantly blinking in the dusk as they queue for the Heathrow run.   There are none. From here I can actually look downwards towards the lights of Stamford Brook tube. I can see an empty platform as no one waits for one of the now infrequent evening District Line trains. I can sense rather than hear the emptiness of the streets.

This kind of mood was actually kicked off earlier this morning when I read Grace Dent in the Guardian on-line. So, a quick word on my morning routine – it is an important part of my day and I believe it when the Covid-19 psychologists talk about the benefits of having a routine to be healthy. Mine needs to include, but not necessarily in any particular order – at least two cups of proper brewed tea (leaves not bags, tea pot and even courtesy of a son’s Christmas present, a tea cosy), a ‘shit, shower and shave’ (though am not shaving much at present), maybe a bowl of porridge (with some dried fruit and half a banana)* and a session with the Guardian. ** This morning I caught a piece by the restaurant critic and columnist Grace Dent. I am a fan of her direct, dry sense of humour and a somewhat cynical approach but in this article, without any warning, she switched suddenly from a paragraph about making her self presentable for work by some ‘boob hoisting’ and overcoming her ‘Patti Smith Moustache to…….

“Still, like countless thousands of others right now, I am isolated from many people I’d give anything simply to hang out with. This open-ended separation feels often unbearable. The thought that some may never be seen alive again, and no meaningful funeral permitted, is, well, let’s not even linger there. Feelings are not facts, I mumble, letting the blackness come and go. Or banishing the gloom by batch-cooking lentil dal…….”

Over my third cup of Orange Pekoe I was given pause for thought. When normally contained writers like Ms Dent are so personal and direct there is stuff going on out there.

As the day progressed, as solitarily productive as it was, I caught my breath a couple of other times. I rang a friend that had been on my “I must ring ……” list for a while. We all have one, right? This friend sounded unlike herself, her voice weak and without the cheery positivity I am used to. It turns out she was just on the upside of a long bout of the Virus – her symptoms had lasted three weeks and had been quite severe. At one time the ambulance had been called but her lung capacity was deemed to be sufficient and she was not admitted. My friend works in NHS Hospital administration and she was pretty sure she caught it on the tube, struggling in because she did not want to let down her colleagues. More pause for thought – and a reminder to make those calls. Do not leave those friends hanging on that list.

I have commented before (Blog XII) how low I was when I heard about Bill Wither’s death and I am going to talk more about him later. However, yesterday I received an invitation from someone I had never met but who must have seen my Face Book post on Bill’s legacy. Her name is Amelia Ray and she posted a forty-minute live tribute of herself singing Bill’s songs, accompanying herself on guitar. It was simple, beautifully sung and heartfelt and I found it moving and somehow a little solace that I could share a moment of respect for a much loved artist via an informal gig that was taking place in some one’s home, somewhere far across the Atlantic. Music is both an important part of my coping mechanism for grief or sorrow as well as how I like to celebrate feeling positive about life. Being able to dance like a lunatic to your chosen music wearing whatever unflattering clothing you have (or don’t have) on, is one of the great joys of living on your own. Anyhow, as this is a contemplative, ‘how I cope’ Blog and music is a such a key part of all of this for me, I thought I would start a regular spot where I share one of my much-loved vinyls. I do not have a record player anymore but would as much dispose of my vinyl collection as I would my most treasured old photographs. These days I listen to all these albums via the ubiquitous Spotify but apart from being, I hope, an interesting section of the blog this initiative will encourage me to listen to some old favourites.

Now, without any doubt Bill Withers ‘Live at Carnegie Hall’ is one of THE all time best live albums and if I had that on vinyl that is what I would share. Unfortunately, my old copy is long gone and I hope is still being appreciated somewhere. Of the couple I do still have I think this is the best. 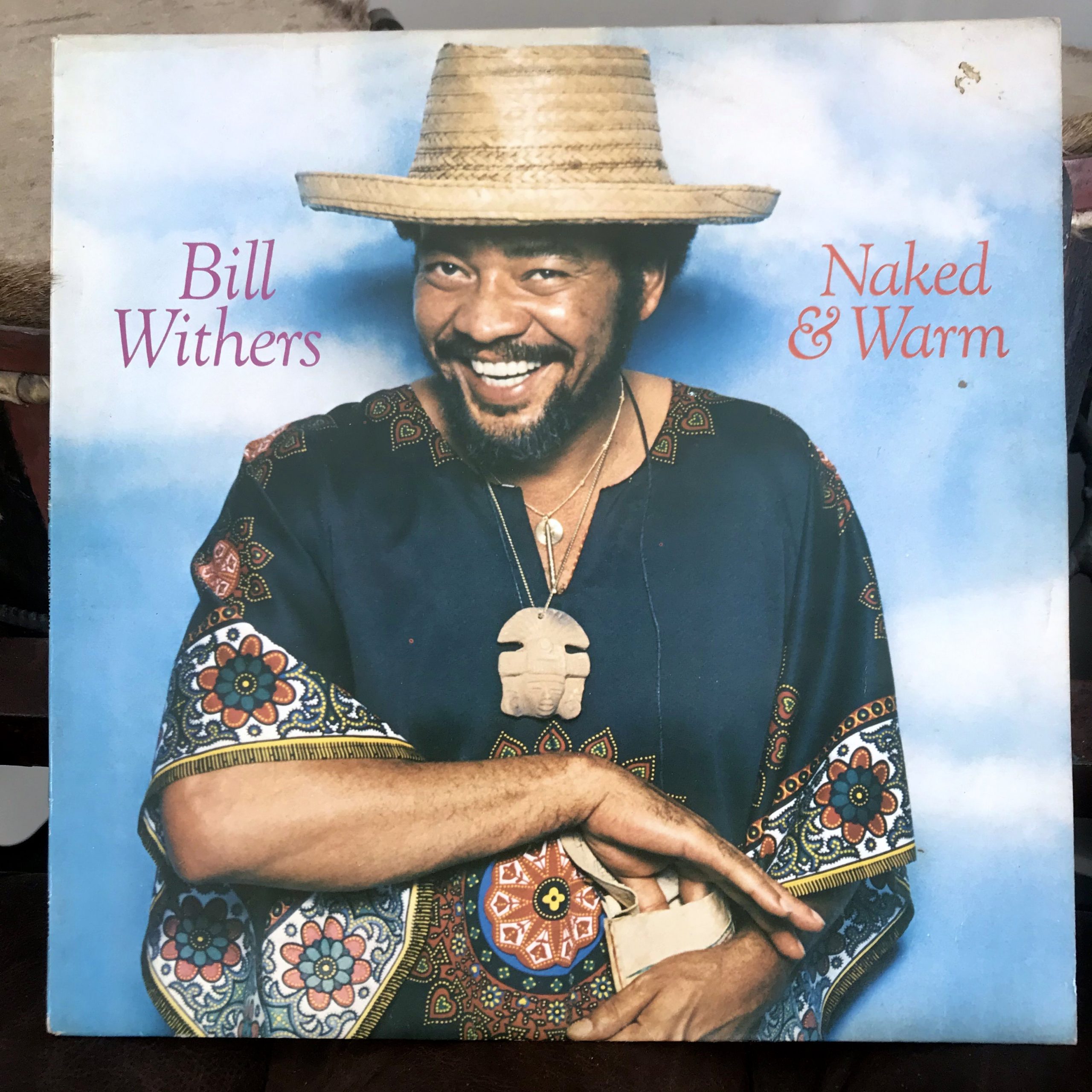 ‘Naked & Warm’ was released in 1976 by Columbia records. Bill later developed serious artistic issues with them. It does not have any of his major hits or better-known melodies but has several strong tracks that bear the hallmarks of classic Withers’ song writing. There are particularly a couple on the album that reflect the influence of gospel. There are several musicians that Withers aficionados would recognise on the album including Melvyn Dunlap (who gets a famous mention on the Live album) on bass and Benorce Blackmon on guitar both of whom often toured with him with The Watts 103rd Street Rhythm Band and are usually present in his most popular You Tube videos. Though it is far from his best album I would recommend a couple of tracks including his ode to his adopted home of Los Angeles “City of Angels” and, “I’ll Be With You” demonstrating one of his ‘sing along in the shower’ vocals.

However, I am going to leave you with some lyrics that demonstrate the other side of Bill Withers, a side that came out from a difficult childhood and genuine poverty. While he writes beautiful romantic lyrics I think the only other writer from the classic R&B days who covered urban poverty and its attendant issues as well as him was Stevie Wonder in his Inner Visions masterpiece. I am constantly reminded that my isolation is so comfortable compared to the global millions squeezed in some urban prison. So I am going to leave you with the lyrics of two of my favourite Withers songs that also have a kind of resonance with me at this moment. In particular, the second one neatly references the disease of ‘Born Again, Evangelical Pastors’, relevant today given they are the source of several of the Covid conspiracy theories and irresponsible hack remedies. As the sing mentions they are still a drain on the pockets of many well intentioned but ultimately deluded followers who fund them out of their meagre income – particularly true in Nigeria. Anyway, check out the songs out on your usual music source and keep the lyrics in mind.

The first is ‘Cold Baloney’ that I think only ever appeared on the ‘Live at Carnegie Hall’, 1973.

“Cold Baloney, and I’m home by myself.
Well I’m five years old, and it sure is cold
Mama’s out cookin’ steak for someone else
Sure am sleepy, but I’m gonna wait till my mama comes
Well if the rich folks don’t eat up all that good meat,
Mama’s gonna brings me some.

Poor mama, she sure looks tired
She said “what you eatin’ son?”
“I believe that cold baloney sandwich looks good.
Would you please fix you mama one?””

“Summer night in Harlem, Man it’s really hot! Well it’s too hot to sleep and too hot to eat. I don’t care if I die or not!

Winter night in Harlem, ooh ooh radiator won’t get hot, and that mean ole landlord he don’t care if i freeze to death or not!

Sunday morning here in Harlem now eve’ry body’s all dressed up. The heathen folk just gettin home from the party and the good folk just got up. Our crooked delegation wants a donation to send the preacher to the holy land hey hey lawd honey don’t give your money to that lyin, cheatin man.”

A day of activity and an evening of much introspection. Just keeping it real and sharing my mood ……….  please also share your mood, in the comments or by email.

* What else am I gonna do – there’s no chance of my tinned tomatoes on crusty toast at the Ritz, no bacon (crusty) roll at the Trinity and no shakshuka at Parle pantry?

** Why I read the Guardian, why I have become disappointed with them and why I think they are still by far the best of a pretty shite bunch we can save for another Blog, possibly along with why I think the UK’s mainstream media – for news anyway – is a disgrace.