I have been determined to manage how much ‘screen’ time I allow my self during this period. Obviously researching and writing this blog is on a screen but I mean in terms of watching videos on my Mac or anything on the television. Oh, and before you ask, yes I do research. Sure, most of this stuff is personal views or from my own experience but being aware that memory plays tricks I do try to double-check any facts. Anyway, I take a look at on-line news in the morning and then keep away from any news and definitely the television until eight pm. Those friends that are obviously listening to radio and TV all day are without doubt those that are most stressed.

So, as I am limiting my TV time I am keen to make sure I strike a balance between the entertainment and relaxing, very important at times of stress, and the informative. Doesn’t the BBC charter itself talk about the need to “inform, educate and entertain”? (Frankly, despite still being world class at the latter two, they, and most mainstream UK media, woefully fail at the former but that is a whole Blog topic on its own). Generally, I am wary of long drama series that are often engaging for the first two or three episodes and then start to blur into ‘same-ism’. However, I have recently watched one that I enjoyed on several levels.

‘Noughts and Crosses’ on BBC1 and still available on iPlayer was frankly a breath of fresh air. Based on a series of novels by author Malorie Blackman the drama reverses the historical colonial narrative and sets the plot against a UK that has been enslaved by an African empire. Despite my interest in the whole colonial narrative I had never heard of these books and then suddenly became aware that my sons’ generation knew of them and other of Blackman’s writing as a strong part of their own story. It turns out that Stormzy so loved the books that he begged to be in the series. The whole ‘young adult’ reading culture had kind of passed me by, which is crazy because anything that brings children through their teenage years and keeps them in the world of reading is to be cherished. One of the fascinating aspects of the TV Series that apparently accurately reflects the Novels despite some changes – I am told the original protagonists were younger than those portrayed on television – are the little touches that raise the eyebrow. By that I mean those moments that cause you to take a sharp breath as you when you consider something from a different point of view. In this case, for the average white person from a person of colour’s point of view. The one that gets quoted is where a white character needs a plaster for a cut and the only ones available are brown – for the master race’s African colour. The whole thing is cleverly filmed in the UK and in South Africa and provides a realistic texture that develops this whole point. Given the absence of opportunities for ‘over a beer’ conversations with my friends of colour I have only heard a few comments from my black British and African mates but those I have, have been overwhelmingly affirmative. Interesting the response from the critics has been generally positive – the only negative reactions have been those in organs most hostile to recognising the achievements of British people of colour. I recommend a watch!

Having said that, this piece is not so much about that programme itself as my reaction to seeing so many young black British and Afro- Caribbean actors on my terrestrial television. Frankly, it brought joy to my heart. Those that have read my earlier blogs – long before these daily corona infused musings – will be aware of my applauding the affirmative role of young Nigerian actors on the British stage. A role that can be a counter narrative to the negative association too often linked to Nigerians in the western media. Two of the most outstanding Theatre performances I have witnessed over the last few years have showcased African and indeed Nigerian talent. The adaption of Lola Shoneyin’s “The Secret Lives of Baba Segi’s Wives” at the Arcola Theatre in Daltin, East London was so good I went twice. Incidentally, that novel would be right near the top of my ‘what to read in the lockdown’ list and, no, you don’t have to know African culture to appreciate the humour. I have also posted about the adaptation of Chekhov’s ‘Three Sisters” at the National Theatre earlier this year. Inua Ellams is a pretty extraordinary young man * and his transposition of the setting from late 19th century Russia to 1967 Nigeria, the Biafran War to be precise, is a masterstroke. Sarah Niles, Rachael Ofori and Natalie Simpson achieved critical acclaim as the eponymous sisters but for me the real strength lay in the strength of the entire cast. It was a genuine ensemble performance and almost all actors were of Nigerian or Ghanaian descent. Once these restrictions are over, if it is on again, go and see it.

However, as always I am going to bring you closer to home. Over the last few years Shepherds Bush’s ‘Bush Theatre’  has done much to nurture the talent of young playwrights as well as performers and technicians of different backgrounds since its inception in 1972. In 2011 it relocated to the Passmore Edwards Public Library building on Uxbridge road where it remains today. Just before the lock down I saw a delightful production of a new play by debutante playwright Temi Wilkey. The Bush’s own description is of an “epic drama between the heavens and the earth”, which sums up a unique plot split between urban London and Orun (Yoruba heaven) with flash backs in Lagos. The plot tackles the struggle between the modern life in the diaspora and the pull of tradition but is basically a ‘coming out’ story with a difference. Several times my eyes were wet from laughter but by the end the intensity of some of the performances brought tears of empathy. Jumoke Fashola, who was also in ‘Baba Segi’, and David Webber are both more experienced actors but I was also impressed by the younger members of the cast. It doesn’t seem that the Bush have plans to stream some of their performances, which is a shame but once this nonsense is over I would urge you to check what’s on. During the day they are also open as a coffee shop by the way.

The point I make is ignore the negativity of the Daily Mail who said of ‘Noughts and Crosses’, “There’s nothing uplifting or aspirational about this version. It’s full of recriminations, resentment, guilt and prejudice. How very 21st century” or the Express and Sun who talk about ‘political correctness’. Make sure you catch this series. Enjoy the fantastic talent we have the UK’s BAME community. In these Corona times it is not just in the NHS that we are learning of the value and talents of people who are termed in our pro-Brexit, right wing media in derogatory terms as ‘immigrants’ but in the arts as well. As Lenny Henry has pointed out we have still to give full representation to people of colour in the technical and managerial aspects of television, radio and theatre but in this BBC series and in our own local theatre there is much to enjoy.

As a follow up to yesterday’s “King & Queen” I offer you today’s Vinyl. 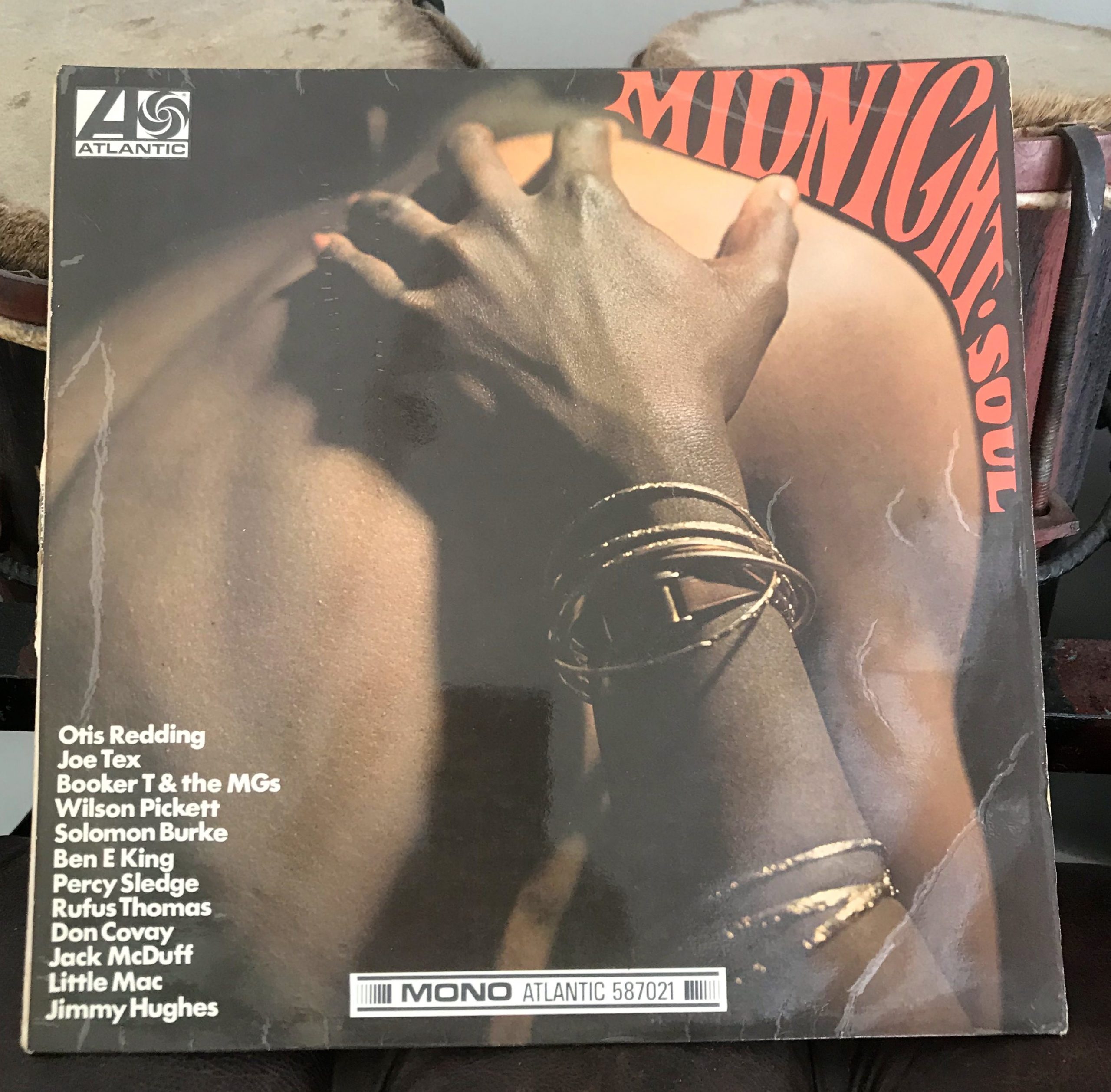 Back in the days L.P’s featuring a mixture of artists as “samplers” provided the opportunity to catch music that was unlikely to be played on the radio. It was hard enough to get to hear black acts like Otis Redding or Sam and Dave who had mainstream hits but without albums like this or the equally popular “This Is Soul” I would probably not have heard of Percy Sledge of Don Covey and then made the effort to hear more of their music. This album was released by Atlantic in 1966 and most, if not all the artists were from the Stax stable. One of the most exciting to British audiences when he came on tour in the same year was Wilson Pickett. To get a whiff of his dynamism and charisma I leave you with a clip from his tour to Ghana in 1970. This video is a joy to watch in so many ways. If you really appreciate what must have been an incredible tour for both artists and audiences alike let the videos from the stream keep running.  Enjoy.