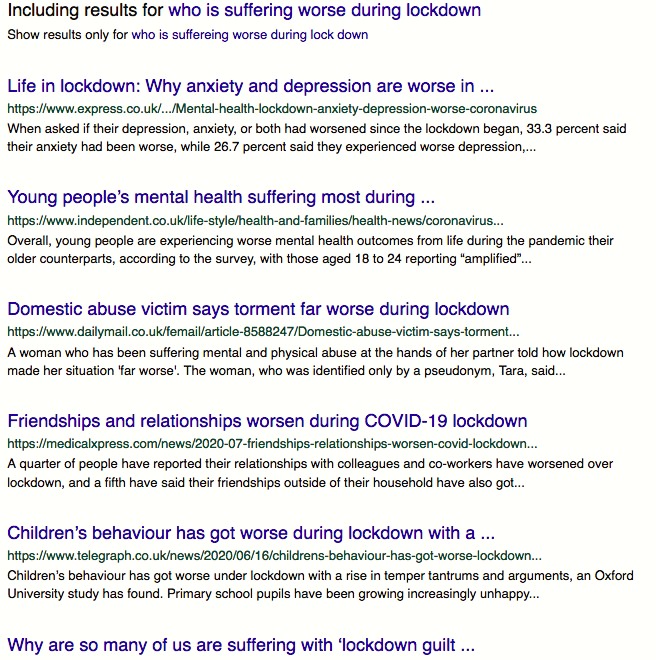 “I hurt easy, I just don’t show it
You can hurt someone and not even know it
The next sixty seconds could be like an eternity
Gonna get low down, gonna fly high
All the truth in the world adds up to one big lie

People are crazy and times are strange
I’m locked in tight, I’m out of range
I used to care, but things have changed”

Lock Down is getting us down

Last week’s blog about how people were reacting to the ‘Second Lock Down’ seemed to touch a nerve. I had more comments either on my website or by email and even some calls, than from any other Blog. The only two other comparable responses were to the series on the Black Lives Matter protests in the summer and, interestingly, a previous one about mental health during Lock Down. The responses to my two Blogs talking about feeling a bit low or having the Lock Down Blues seem to suggest that these are widespread emotions but there are few outlets to share them. While I think the British ‘sang froid’ is exaggerated and I have written before how I believe the ‘blitz spirit’ is, frankly, a convenient myth exploited for political and nationalist purposes, clearly there is an unwillingness to open up. To be honest, it is even easier for me, tapping away here at my crumb strewn lap top, to expose more of my feelings than I do over the phone, zoom or in ‘pavement conversations’. Like everyone I have ‘ups and downs’ but there are clearly those whose ‘downs’ are deeper. I am not qualified to do more than share my anecdotal experience but any on-line search displays worrying headlines. As can be seen from the above screenshot. The support groups like The Samaritans report more calls across all ages, particularly from those under 30. There has been a spike in domestic violence, an increase in abuse of transport and retail workers, pressure on relationships and even news of a worsening in children’s behaviour. One hopes (but fears it is not) that this is taken into consideration by the government when considering the various options for restrictions. Mental health is harder to measure than Covid test results but at some point my worries are that the pandemic will be causing more damage to people’s minds than it will to bodies. Most of the noise about the balance between opening up and shutting down has focused on the economic and financial impact. Although these also have a major bearing on psychological well being, they are not the be all and end all.

The average age of my readership and therefore my respondents is definitely in the upper age echelons though I do have some feedback from younger generations via my and my friends’ children and the rugby club I chair. I do notice patterns from the comments and my own conversations. My age is such that many of my mates have become grandparents in the last year or so and this, along with concerns for the more medically vulnerable, is one of the major causes of stress. There are still many who have not seen their grandchildren since before the pandemic or not seen new additions at all. This is particularly true of those in the Northern areas that have been most subject to government restrictions. Often grandparents put them selves through severe separation so that they are able to visit once official constraints are eased. Even if their tier would allow them a trip to the pub they deny themselves for fear of jeopardising their loved ones. This causes real dislocation and loneliness. Somehow it seems most of my mates spend half their time on long solitary walks: partly to keep some fitness, partly as a way of getting out of the house without putting a vulnerable family member at risk. Many retired couples I know have developed routines of independence. Let’s face it; retirement to ‘spend more time with the missus’ spawns music hall style jokes but many partners who are suddenly presented with isolation with their other half 24/7 are not laughing. I know couples that arrange to stay apart (sometimes even all of the time) in the mature understanding that living under the same roof with no escape would put their relationship under pressure. Young couples often living in smaller, more confined flats also suffer the same pressure. Many of the under 30’s with jobs in London who ‘house-share’, have given up and gone back to the parental home. In some cases the parents are over-joyed but this is far from being a universal emotion.

In London, the move from Lock Down to Tier 2 will have some positive impact but some aspects of the new rules for pubs, for example, have clearly been defined by people who do not actually frequent anything other than their home counties constituency Michelin starred gastro pub. Pubs must only provide alcoholic drinks at a table with a ‘substantial meal’. They must now only close at 11pm but last orders must still be 10pm. Let us consider the implications of this.

These new coronavirus regulations define the meal according to precedents set in U.K. licensing law. The U.K. Licensing Act (2003) permits 16 and 17-year olds to drink alcohol if it is served alongside a “table meal.” This is defined “as might be expected to be served as the main midday or main evening meal, or as a main course at either such meal. A table meal is a meal eaten by a person seated at a table, or at a counter or other structure which serves the purposes of a table and is not used for the service of refreshments for consumption by persons not seated at a table or structure serving the purposes of a table.”

This actually means that according to law, identical plates of food are or are not table meals; depending upon what surface they are served on. Given all establishments are required to do table service only at the moment, the “is it a bar or a table” question is relevant as the only real legal definition of what is a ‘substantial’ meal. Ministers are actually responding to questions about this by saying a pasty on its own does not count but a pasty with chips does. Similarly a sandwich does not count but a sandwich with a side salad is ‘a substantial meal’. This just making things up as they go along. Yet the government will expect local councils and the police to decide whether individual menu items constitute a meal, which means that a scotch egg’s definition might change from street to street in London and its 32 different councils. A publican will not know if he is complying with, or breaking, the law until a licensing official turns up and shuts him down from doing what a pub in the next street, in a different council, is allowed to do.

I do not even want to consider the effect of what is a whole hour of  ‘drinking up time’. What an earth do they think what will be achived by stopping people buying drinks an hour before they have to leave? At five to ten, the following will be heard across the country …….“That will be three pints and three shots for myself and each of my six mates, err sorry brothers from the same household, landlord”. Please arrange the following words to find a well-known phrase or saying – ‘up brewery could piss organise not in a’. Here’s another one ‘bunch what of a twats useless’. 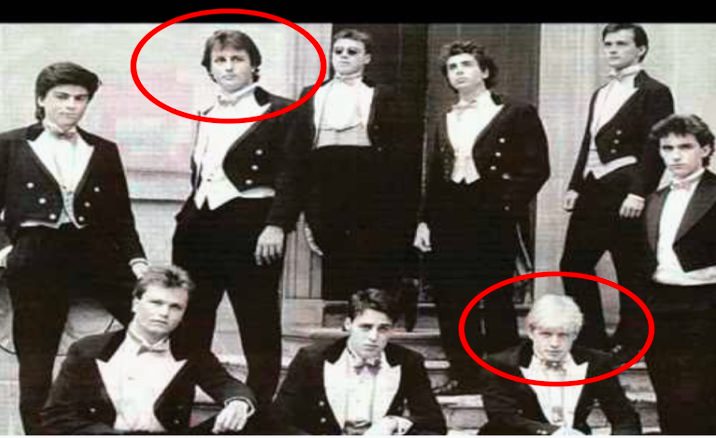 What chance is their that these people could understand the role of a local pub in a proper community?

Again, and this is how such arbitrary rules impact on mental health, many pub regulars are single people who go down to their local, on their own for company. I am comfortably off so I can afford to have a couple of pints and order food but there are many thousands of pensioners and others who do not have the money or pay for ‘substantial meals’. Are landlords now to refuse to serve the elderly regular who comes in every day for one or two bottles of stout before going home to their own simple supper? The answer, according to the law, is ‘yes’.

I said earlier that I hoped that government takes the impact on mental health into consideration when considering the various options for restrictions. These ivory tower Bullingtom club chums’ obvious lack of understanding of how genuine local pubs work in their communities leads me to suspect that it does not. Without being flippant about real psychological well-being this government’s decision making process is driving me (along with the entire hospitality industry) mad. Of course I will be down the pub this week for a pint and will duly order sausage and mash to comply. If I have to do it without being able to have my usual conversations with the regulars whose company makes The Raven my local, my home from home, it will not be the same. More than that, I will be seriously pissed off by a government that allows me out but by means of an ill thought out and meaningless regulation will be depriving many people with lower incomes than I of the pleasure of some anxiety relieving company.

I am sure he would enjoy a pint with his mates ir frankly any friendly faces down The Raven or in his own local.

This week’s epigram, above, is from one of the greatest ever lyricists, Bob Dylan, a man whose songs describe these times as well as, in this case, the movie that this track was written for. “Things Have Changed” was written for a film ‘Wonder Boys’ (2000) starring Michael Douglas (winning the Academy Award for Best Original Song) that I have zero interest in watching, even for this song. In fact, while recognising his brilliance I have always had a certain ambivalence about Dylan. Generally, I prefer covers of his songs to his own and this case is no exception. 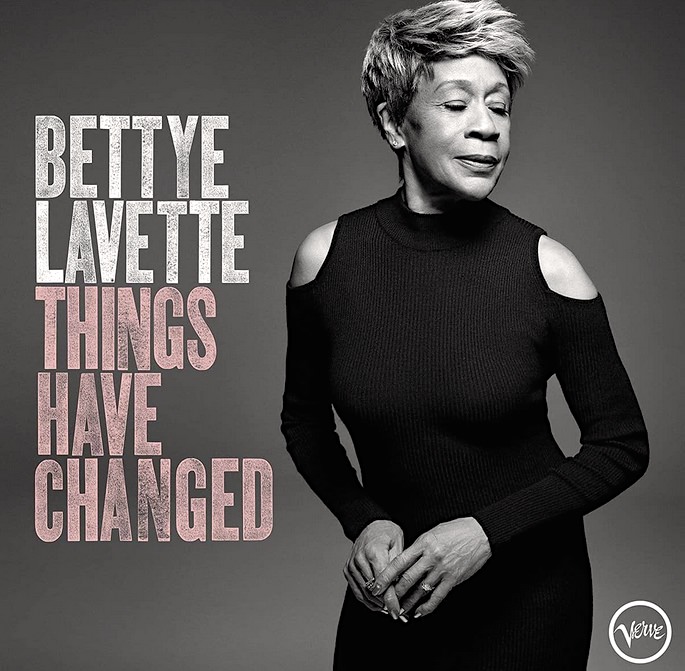 Bettye Lavette was born in Michigan but raised in Detroit. Despite having released singles in the early ‘60’s she fought her way through the years as an unrecognised, jobbing artist, developing her worldly almost contemptuous style that eventually found success in 2005. Her 2018 album ‘Things Have Changed’ takes this and other Dylan songs and adds her own earthiness to his already cynical worldview. It speaks directly to me as someone that Leonard Cohen, while writing of himself, also spoke directly to in another great song of ennui, subdued rage and disguised vulnerability: ‘The Tower of Song”

Now you can say that I’ve grown bitter but of this you may be sure
The rich have got their channels in the bedrooms of the poor
And there’s a mighty judgment coming, but I may be wrong

You see, you hear these funny voices
In the Tower of Song ”

Today I will leave you with Bettye LaVette’s attitude and voice and Dylan’s words. (By the way, how does a guitarist make his licks sound cynical too – I don’t know who the young dude is in this version but his solo hits it for me.) Enjoy.  https://www.youtube.com/watch?v=e2K8HdJ3JtI