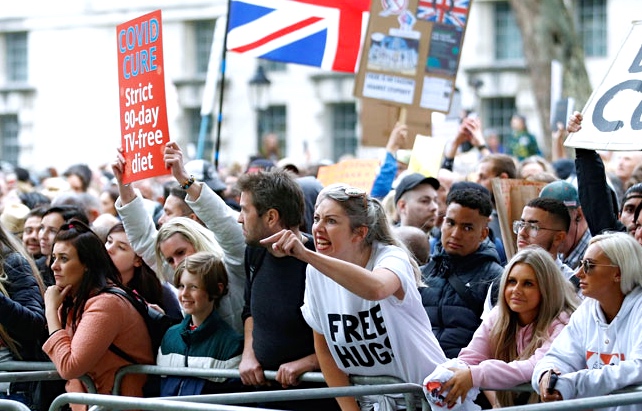 “The light from the oncoming train focuses the mind.”

As UnBound becomes confined once more I shall now call my blog ‘Chiswick ReConfined’. However, the new phenomenon of Lock down fatigue is catching and I won’t be back to a daily blog but will try to pop a couple up a week….. Unless I get loads of comments, of course.

Lock Down fatigue or something else?

I have read some commentators using the reference to the film ‘Ground Hog Day’ but, actually, it’s not. Clearly, this is different to the first Lock Down. It is early days in the ‘maybe a month, maybe not, it’s a nuclear option, boom’ world of our Prime ‘oh bugger what the fuck am I gonna do now that Trump is out?’ Minister but a walk down Chiswick High Street is an utterly dissimilar experience to March, April May. In the first Lock Down the streets were pretty empty and the traffic much reduced – now, not. at. all. This Saturday Chiswick High Street was plainly as busy as I have ever seen it outside of Christmas week. I am told this phenomenon was seen right across London. Originally, it took months for restaurants near me to work out that they could offer take-aways safely and that there would be, literally, an appetite for them. There was nary a Deliveroo rider to be seen last time whereas now London is Deliveroo/Uber Eats city. Any fast food joint, with less than a dozen mopeds with helmeted drivers all shouting through their masks at each other or at their phones, should pack up now. Cafes have immediately sprung into ‘corner shop mode’ and parks and open spaces are full of single and double exercisers, take out coffees in hand. Pubs are straight into ‘carry out mode’. Last time my local, The Raven, was completely shut but this time Landlord Dave is out on social media tempting me with pictures of the Timothy Taylor’s Landlord pump waiting for me to bring my plastic container (or 4 pints for 12 quid he says).

The real transformation however, is not just visibility and the preparedness of small businesses to stay open, and don’t get me wrong, I am all for that. In fact, it is vital we support them. It is about mental attitude. Last time, the great majority of people I knew and, I would assume, the general public, were genuinely sensitive to the need for care. People were actually pretty scared, if not for themselves, then for the vulnerable members of their family. It was clear that there was broadly a consensus around the spirit of isolation and distancing and not just for the legality of it. This time, the attitude is much more around ‘how do we get around’ the restrictions. There seems to me to be very little genuine solidarity with the essence of the thing. As I had mentioned in earlier blogs that attitude was already visible in the approach to London’s ‘Tier 2’ restrictions. While I saw publicans and proprietors genuinely engaging with the requirements for ‘Track and Trace’, distancing and serious hygiene in their establishments I found frustration and even heart-felt anger at the ‘single household’ rule. The concept itself was understood but any thought that it was their responsibility to enforce the unenforceable was dismissed. Rapidly, it became clear to me that all those tables of six people in pubs and restaurants were not single households. The definition of ‘indoor’ and ‘outdoor’ has become more blurred as the cold weather sets in. ‘Out-of-doors’ igloos, greenhouses and full on ready made buildings (what in my post-war youth were called ‘pre-fabs’) sprouted everywhere and were rammed. So public belief in government pandemic management had already disappeared and cynicism set in even before we moved from Regional to National Lock Down.

So, what has led to this change in attitude across the ten months of the UK’s full-blown Covid crisis? Clearly, there is some genuine fatigue and ‘familiarity breeds contempt’. Spending time with any Millennial makes it clear that the best-intentioned twenty or thirty something is bursting to get out there and play football or rugby with his/her mates and then, critically, have a beer after or, for the less sporting, to just go to a gig or just hang out. Conditioned to be social, after a day working alone on a laptop at a bedside table or in a kitchen, either in a shared house or with their Mum, having given up sitting alone in a rented flat and moved back with their parents, younger people are desperate to be out and about. More significantly, there is also fatigue across older demographics. My generation, with grandparents missing their grandkids and unable to undertake baby sitting and allied duties, is increasingly frustrated. Normally the older group displays more patience and compliance but this is being eroded.

It is impossible to consider all this without being political. Cummings maybe the highest profile example but the many instances of the political elite ignoring the rules has had a significant effect on attitudes. The Prosecution Service continuing to ignore calls for proper investigation of the Barnard Castle jaunt and Johnson senior (what an utter utter arse!) being constantly photographed doing what the hell he wants to, erodes public confidence in a government that has performed more U-turns than an average Uber driver does in a month. Utterly failing to satisfy the contradictory demands of their City backers and their heartland constituents with the need to protect the health of the nation, including those that happen to live north of Watford Gap, the government seem more and more to be reactive rather than having a coherent strategy. A case in point was Rishi Sunak being caught in a restaurant and jumping to rationalise it by announcing ‘business meetings’ were exempt from ‘Tier 2’ single household restrictions. Within days I started getting emails from high-end restaurants offering private dining for up to 30 people if they were ‘business related’. So 25 students drinking lager and shots in Manchester = bad and irresponsible but 25 suited ‘businessmen’ drinking fine claret and port = good and acceptable. Such disparities were part of the sourness of the political debate with leaders of Northern cities who understandably believed the London-centric Westminster cabinet was being discriminatory. Local idiocy such as building a fence around student accommodation only reinforces the overall atmosphere of unfairness. Even though that was not a Westminster act it exacerbates the whole atmosphere of injustice and as many of those students’ are from middle class homes in the Home Counties it compounds Tory heartland disappointment with ‘their’ government.

Without becoming side tracked by current American politics, events there do demonstrate how general anger and frustration leads to polarisation and societal fragmentation. Alienation from the neo-liberal elites and fear of a society moving away from their perceived ‘normal’ have become so widespread that 70 million people in the US have just voted for someone that, from our perspective, is just a nutter. Yet, already we see that here in the UK uneasy alliances of anti-maskers, anti-vaxxers and other conspiracy theorists have joined together in demonstrations outside parliament and other city centres. As the extreme right of British politics has been triggered by a reaction to Remainer, BLM and Climate Change activity, so even in sedate suburbs like Chiswick and Ealing car owning middle classes have taken to the streets to protest against cycle lanes and road closures. Kier Starmer is taking the Labour Party more towards the centre, offering no cohesive alternative to the Johnson Covid catastrophe and distancing himself from the younger breed of activists that joined labour inspired by the Corbyn vision. The UK Left and active youth will increasingly feel they no longer have a voice for legitimate grievance through mainstream politics. 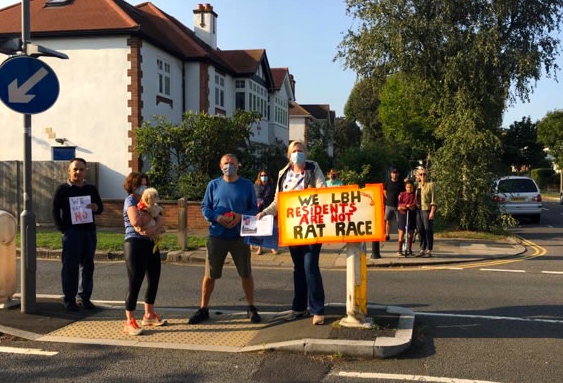 There is a growing sense of frustration in the UK at centrist politics in both the geographical and political sense. Many people outside that core increasingly feel themselves to be un-represented or ignored. This feeling is being exacerbated by the Covid crisis. It is entirely possible that no government’s response could ever wholly assuage the feelings being unleashed by the pandemic but, to my mind, this government’s poor communication and apparent lack of direction is making things worse. It is becoming clear that there is more and more cynicism about the restrictions and less and less people are taking them seriously. I believe that if there was a genuine sense that these actions were taken in everyone’s best interests, according to transparent statistics and definable science and these were clearly communicated, then there would still be compliance. There isn’t and so there is not. I see this phenomenon as being part of a wider disillusionment with politics at every level. As we watch the electoral shenanigans across the Atlantic and tell ourselves that these things can never happen here our own reaction to the new Covid Lock Down could be an indicator that this confidence might be misplaced.

Phew – maybe that is a little of a serious blog but viewing the TV this week does make me feel like ‘there is some serious shit going down, man’. Over the weekend there have been plenty of opportunities to watch Joe Biden and Kamala Harris’ victory event in Wilmington. I must say I enjoyed the music that was played over the loud speakers to reinforce their political message. It was not lost on son George and I when Harris came out to a Mary J Blige song for example. There was at least one Bruce Springsteen song too, which is not surprising as he has been vocal in his criticism of Trump. His songs are not directly political but their very essence is based in the reality of the ‘American Dream’ for urban blue collar and marginalised working class of modern USA. 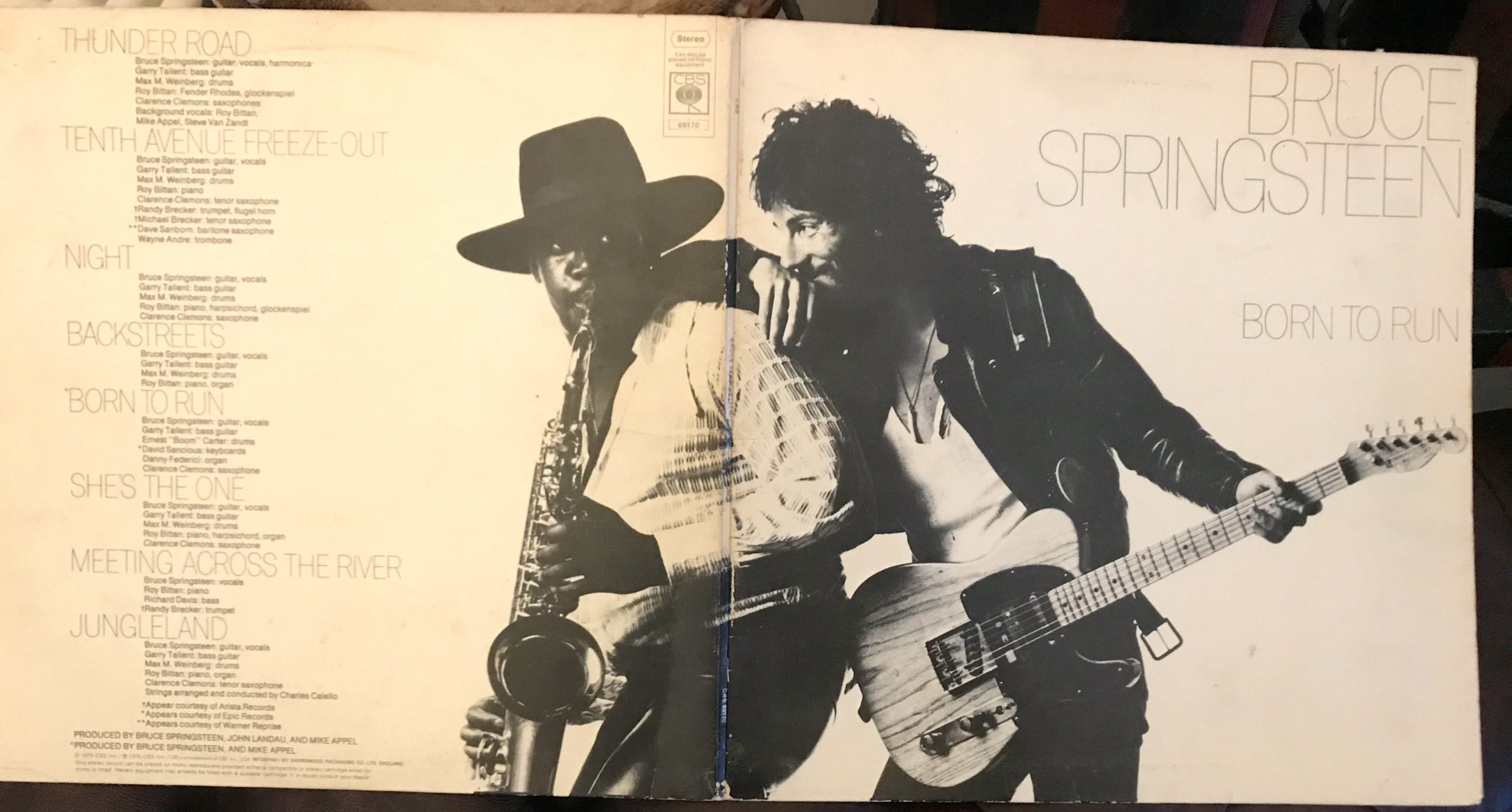 The Boss with Clarence Clemons on the open cover of ‘Born To Run’.

When ‘Born To Run’ came out in 1975 I wasn’t actually a massive fan but came later to understand where he was coming from. In fact, I kind of ‘got into’ Springsteen through the sound of Clarence Clemons’ (1942-2011) surging, soaring saxophone and eventually added a copy of the album to my vinyl collection. So, my musical ending to today’s Blog is actually from a performance of the album’s final track ‘Jungleland’, filmed in our own Hammersmith Odeon in 1975 and featuring one of Clemons’ sax solos. Enjoy.

A shorter version of this Blog has appeared in Chiswick Calendar.