“To every thing there is a season, and a

time to every purpose under the heaven:

A time to be born, and a time to die; a time to plant,

a time to reap that which is planted;

A time to kill, and a time to heal;

A time to weep, and a time to laugh;

a time to mourn, and a time to dance;”

We are all creatures of our environment.

That comment in itself could set me off on some different conversations but today I am taking things calmly and simply. The weather has improved. Maybe even the full arrival of spring. The view from my balcony has gone from a medieval winter to that soft and hazy sunlight that heralds the transition to warmer days and longer evenings. The recent announcement from the man who claims to be in charge: the ‘road map’ to the end of Lock Down, as vague and full of caveats as it is, inspires hope that a pint in a pub garden is no longer just a far off dream. Needless to say, in reality very little has changed but I am determined to allow the sunshine (and the hope of a foaming pint) to permeate my core and defrost my inner grumpy old man – just a tad anyway.

So, Ravenscourt Park, my habitual exercise stroll has gone from soggy marshland to crocus filled meadow in about a week. True, about twenty thousand other local residents are also enjoying that change but in my seasonal lightness there is still joy to be found in that. The play areas are open and full of parents happy to have brought their off spring to release energy climbing on a frame instead of the settee and home-office work table. Mums stand in small clumps like daffodils, their heads all facing the direction of their children and their conversations of how bad home schooling is and how nice it is to rediscover school gate gossip. The grassy areas are covered in mini ball games – this period has seen the rise of the semi-professional youth football coach who marks out a small area and can make a little income on top of furlough or even Universal Credit by taking on a few budding Messis and giving Dad and the back garden a break. There is genuine joy in the sound of all this collective play: laughter, the odd tear, shouts for Mum and the sheer exuberance of childhood.

The other common sound now is the ‘thump thump’ of boxing glove into training pad. The growth in the personal trainer industry has been phenomenal and now every green space has an corner full of frighteningly ‘stacked’ young men and women exhorting their client into one more of whatever it is that they are ‘repeating’. (It’s all about the repetitions right?) I have to say some of the sweat soaked Lycra clad victims (it all looks like torture to me) hardly look like they need any encouragement but there are clearly some for whom this is a genuine challenge. Lock Down has affected different metabolisms in different ways and as seasonal changes brings out the chrysalis to shed its shell so there are those emerging, blinking into the sunlight to shed some softer tissue.

My habit is to grab a take away coffee from the kiosk in the middle of the park or, it goes without saying, bring my Ritz bacon roll to relax on a bench. The last couple of times it has been tricky to find a bench free. On other occasions I saunter round with a friend. Nattering inconsequentially is almost meditative. Covid lock down escape strolling is best done without too serious a conversation. After all we have no new news as no one has actually done anything news worthy and I for one am keen to avoid the interminable and depressing conversations about the UK’s achingly poor response to the pandemic. Last week, another exile from Ritz breakfasts and I were pootering * with our coffees and as we pootered past what the Friends of Ravenscourt Park rather grandly term ‘The Lake’ we were surprised to see an entire goose family, complete with goslings, enjoying the admiring gaze of several onlookers. I thought this was a bit early in the year and sent a msg to oldest son Tom, who knows about such things, and he correctly identified the family as Egyptian geese who breed early. 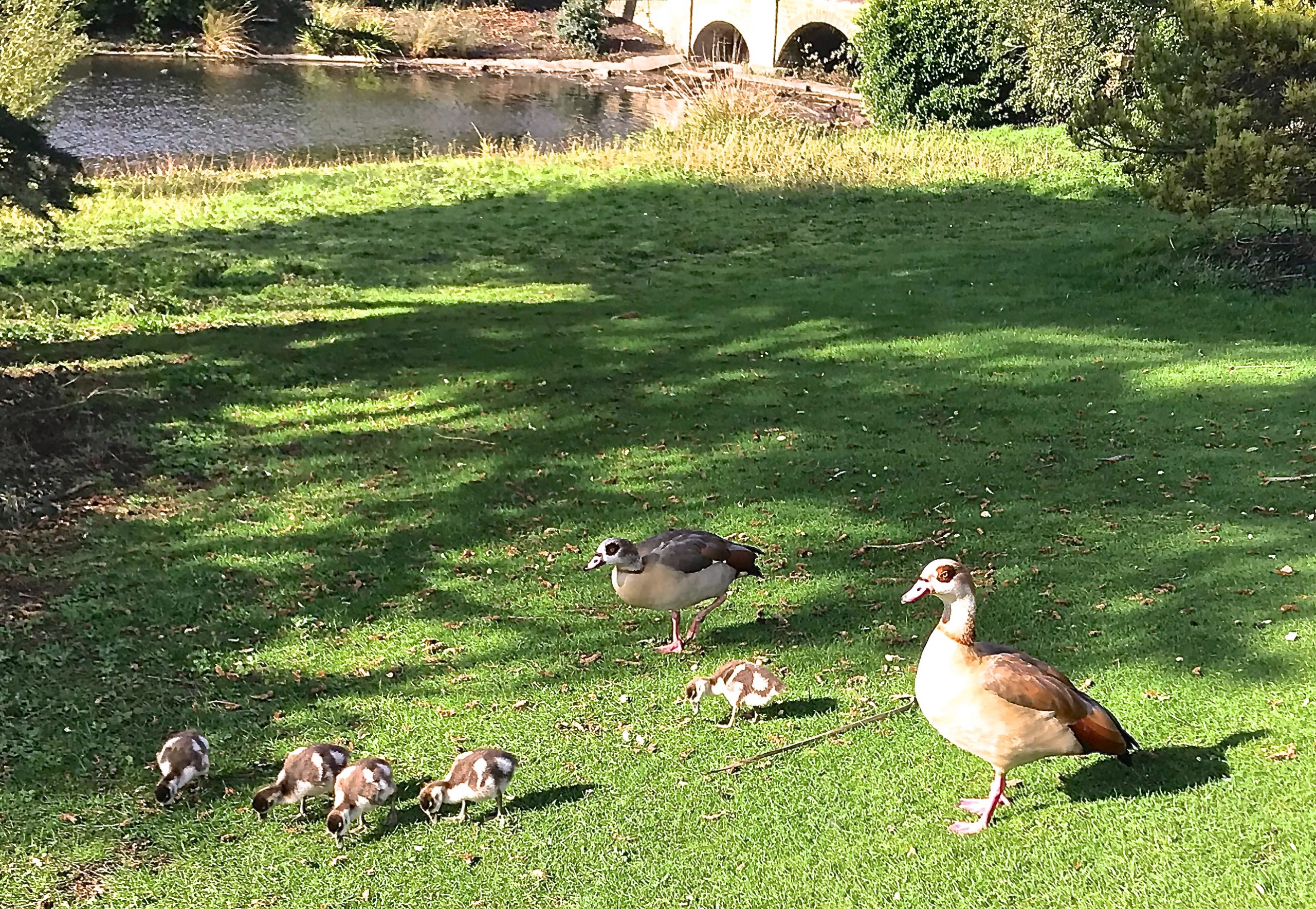 It turns out that this species was originally imported in the 18th Century to adorn ornamental gardens. That seems crazy to me as we have plenty of our native species to enjoy. They are an ancient breed and were celebrated by the Pharaoh’s Egyptians. Anyway, as always some escaped and went feral. As a wetland bird the wild population initially developed in the fens and marshes of Norfolk. Despite the change in temperature from its native habitat in Africa, particularly the Nile valley, this goose is a creature of habit and continues to breed in January thus explaining my surprise at such mature goslings in February. Apparently, they usually pair for life and share parental duties. Certainly both parents are visible here and seem inordinately proud of the attention their fluffy offspring are getting. They need to be careful however as they have been declared a ‘non-native’ species and are therefore unprotected.

In my toddler years, when my parents took me down the park in my pushchair (Battersea Park, as my infancy was spent in Pimlico, well before it became ‘South Chelsea’ and very posh) if I tripped over I would have heard someone say ‘whoops-a-daisy’. I had not heard that expression for donkey’s years but just as I was writing this blog there was the ‘ping’ of a Whatsapp message on our residential block’s community chat group. As a random conversation evolved one of our neighbours used the word ‘whoopsie’. “No one uses that expression anymore” came the reply from another. Well, that’s always a challenge and I had to check. Supposing that it had been a London expression I was surprised to find that it was first recorded as ‘up-a-daisy’ in Yorkshire in the Victorian times. I guess pronounced ‘oop-a daisy’. However, its modern use as ‘whoopsie-daisy’ was first seen in the US in a 1925 New Yorker article. My paternal Grandmother, born in the Victorian era, was ‘Daisy’ so I assume that’s why I had believed it to be a London expression. In our community debate, apart from being side tracked as to why Frank Spencer used the term as in ’my cat has done a whoopsie on your carpet’, the discussion as to modern usage was resolved by another neighbour who shared this clip from ‘Notting Hill’.

So, if Hugh Grant can use it, that counts as modern usage to me – even though, unbelievably, this film is now over twenty year old!

So, as Pete Seeger said (and yes, clever clogs and bible bashers, Ecclesiastes said it first) everything has its season. I am determined to convince myself this is not the season to be a grumpy old man. This is the season for ‘pootering’ and ‘whoopsying’. This might make you laugh but, equally, weeping at the random nature of it all is just as valid. After all we are all creatures of our environment and, thus, of our ‘season’.

Instead of leaving you with the original version of Pete Seeger’s ‘Turn Turn Turn’ (1959) and skipping past Mary Hopkins’s (1968) ‘Opportunity Knocks’ winning version as well as many others I leave you with the version by the Byrds. (Well, it does fit with the Geese story – right?) They released it as a single in 1965 and it was a staple of their live shows until their break up in 1973.

* You know what I mean right? ‘Pootering’ is very similar to ‘pottering’ but has a slightly more nuanced meaning. To me whereas ‘pottering’ is aimless and directionless, ‘pootering’ however suggests a general direction but in a relaxed and almost eccentric manner. However, my computer says ‘no’. So if you try to use it in Scrabble your opponent will win a challenge. Shame.

A version of the Blog has previously appeared in local news and views website https://chiswickcalendar.co.uk/