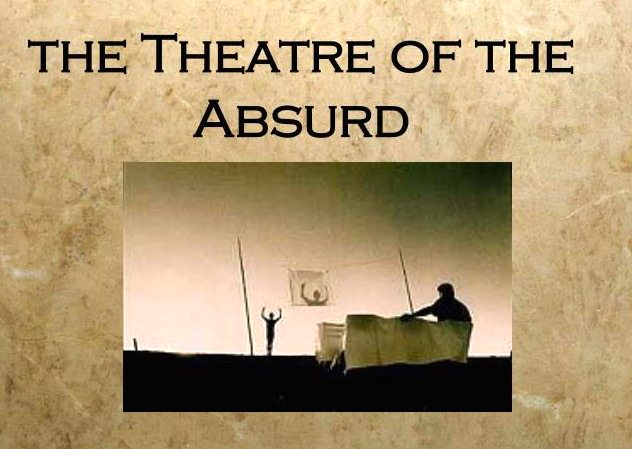 “Talking about things that are understandable

only weighs down the mind.”

What Are You waiting For?

Back in the day (1970 to 1984) the BBC had a regular, award winning live theatre series called ‘Play for Today’. The list of writers and directors who honed their skills on those programmes is like a roll call of the greats of the British film and television industry. If this was a podcast, you would hear me sigh deeply.

I am not sure Samuel Beckett ever wrote a ‘Play for Today’ but I was pondering that if he was still alive and decided to write about our current times, what would he make of it all? Who Knows? If there was ever a time that reflected the ‘Theatre of the Absurd’ it is today. I pour a libation to the Master to apologise for my attempt to capture the mood of the day in a two act hybrid version of some of my favourite Beckettian moments what I shall call ‘Be Careful What You Wait For’. *

Act One is set in a giant empty supermarket. All the shelves are empty except on one side is a massive pile of what appears to be rotten fish. On the other side is a large sign that says “Seasonal Covid Staycation. Now Is The Winter For our Discount Tent”. **

In the middle of the stage is a large, clearly dilapidated Christmas tree with the remains of some decorations though it has lost most of its spines. Hanging in the tree is a broken sign that says ‘Oven Baked’.

There is a continuous background soundtrack of a washing machine forever stuck on the Spin Cycle. 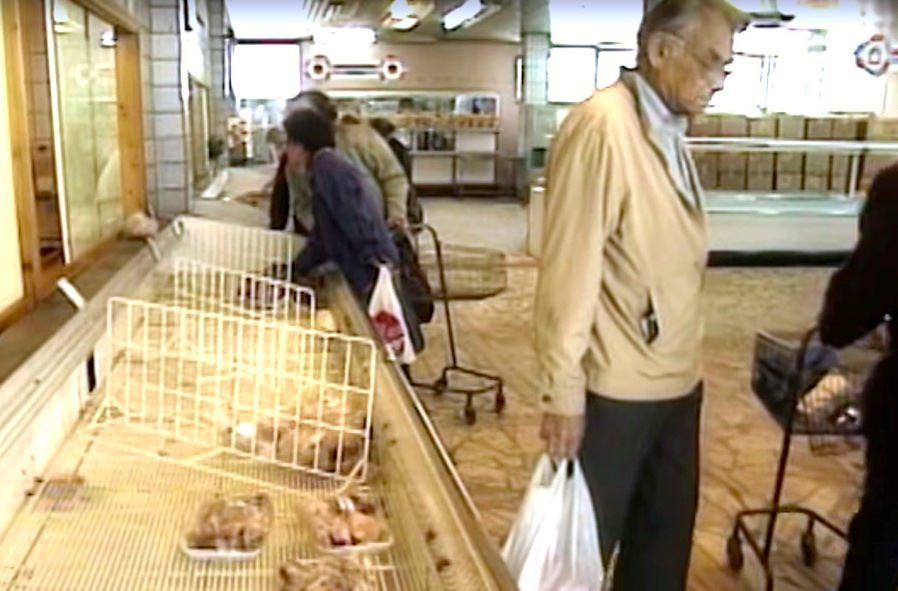 Bojomir – tired figure, has a ‘put upon’ sensibility, talks and moves slowly. Dressed as a shabby Churchill figure.

Govagon – clearly exhausted but with a kind of adrenaline energy, talks and moves in a staccato manner. Dressed as a shabby Thatcher. Always carries a handbag.

Starmy – the youngest and smartest of the cast. Has immaculate hair. Follows Murzzo everywhere on a long rope and listens attentively.

As the lights come up Bojomir is sitting on a box and Govagon standing near by both close to the tree. Bojomir is trying to tuck his shirt into his trousers but apparently without success.

Bojomir      (clearly frustrated) Nothing to be done.

Govagon   I could never hold that opinion. All my life I’ve tried to put it from me, saying Govagon, be flexible, you can always change your opinion again. And I resumed the struggle. (He broods, musing on the struggle. Turning to Bojomir) So there you are again.

Govagon I am glad to see you back. I thought you were gone forever.

Govagon   But why did you leave? You left me waiting here all alone.

Bojomir   The pressure became so hard. They didn’t understand. (Stands up, puts hand in pockets, plods stage right) (Mutters under breath)…….. “never surrender, and even if, which I do not for a moment believe, this Island or a large part of it were subjugated and starving, then our Empire beyond the seas, armed and guarded by the British Fleet, would carry on……….” (Stares blankly into middle distance)

Govagon The trouble is you never had the courage of your lack of convictions. (Pauses. Sighs) So, why did you come back anyway?

Bojomir   I was told there would be a delivery. Here. Eventually.

Govagon There will. Of course. Very soon now.

Bojomir   (Walks disconsolately to the other side. Stares) Soon?

Govagon   Of course, they’re just completing the paperwork. What was it you wanted exactly?

Govagon (Obviously frustrated) There’s some Wensleydale hidden in the back. They’ve not been able to ship it anywhere.

Bojomir   No No! (Raises his head. Looks wistfully as if he is remembering something.) Forme d’Ambert. Washed down with a good 1985 Burgundy with a few old Bullingdon boys.

He is interrupted by the sound of banging off stage and Murzzo enters dragging Starmy along on the long rope. They cross the stage in front of the others. Starmy is carrying, with some difficulty a pile of boxes. Each one is marked ‘Values’, ‘Principles’, ‘Socialism’, ‘Green Policies’ etc. Eventually he drops them all in a clutter.

Murzzo. (Turns back and stares at Starmy) I told you not to bring all that baggage. (Cracks The Whip) I told you, if you did what you are told, you will get your chance but you will never get anywhere unless you toe the line. Say hello to the nice people. (Starmy turns and looks at Bojomir and makes a kind of curtsey).

Bojomir (has reverted to wandering about distractedly. Mutters) …. if the British Empire and its Commonwealth last for a thousand years, men will still say, “This was their finest hour.”

Murzzo (Looks distastefully at Bojomir, turns back to Govagon) I expected you to deliver but it has been….. how long now? (pause) And we will lose patience.

Govagon Soon, Soon. Please bear with us. (As Boy enters stage left) Look, here’s his boy now. He’s sent his boy. (Moves towards Boy expectantly) Boy, did he send it? Have you got it ? The paperwork?

Boy No, (hold up a single roll of toilet paper) but he has sent you something to be getting on with……….

Act Two is set on what appears to be a giant cycle lane. This is made clear by a number of confusing road signs, a pile of broken bicycle parts and a large banner with the words “OneChiswick says No”. There are signs of desolation with broken walls, piles of bricks and concrete. If possible there should be back progression of the effects of the Climate Crisis; bush fires, queues of economic migrants, melting ice blocks, frozen US states etc.

At the back left but clearly visible are two large recycling wheelie bins. At the back right are a pile of coffins some marked ‘Air Pollution’, ‘Driver not looking’ and ‘Lorry on cut through’.

The sound track is of a gusting wind with the occasional siren of an emergency vehicle. 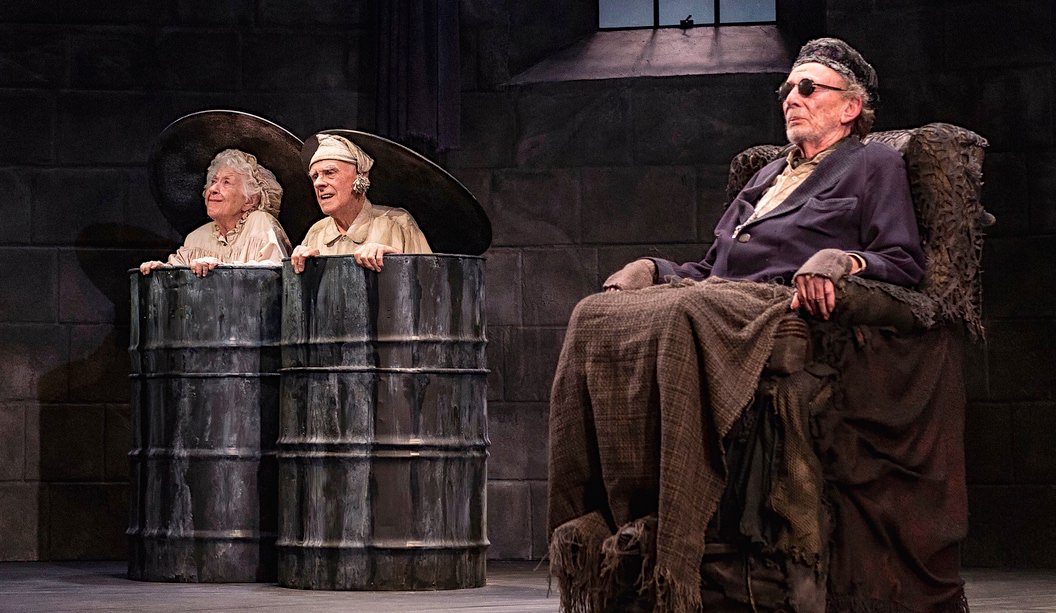 Mag Curran – Doppelgangar for Leader of Hounslow Council and lives in one of the wheelie bins.

Nell Biddolph – Doppelganger for Arch Tory local councillor and ‘nay sayer’ and lives in the other wheelie bin next to Mag.

For reasons of Brevity, Sanity and Gravity in this version the last two are non speaking parts but every now and again one of the lids pops open and Mag or Nell put their heads out and look around before sliding back down and shutting the lids behind them.

As the Lights come on we see Splov pushing Spamm in a kind of armchair with wheels.

Spamm. (Irritably) Look. Look. I asked you to look. What can you see?

Splov (Resignedly looks out across audience) Same as before.

Spamm No. No! Look again. Tell me.

Splov (Looks the other side of the stage) Nothing.

Spamm There must be. Look again.

Splov I have been looking every few minutes for as long as I can remember anything. It is always the same.

Spamm   I knew it. It’s their fault (gestures in the general direction of the Wheelie bins). Well, hers mostly. Ask them.

Splov   No, they’ve said enough and eternity is too long already.

Spamm   So, look again. What do you see?

Splov What do you expect? If you keep doing the same thing you will see the same result.

Spamm   I know, I know but what can you see?

This week’s musical closing is in honour of one of the Jazz greats who passed away recently. Armando Anthony “Chick” Corea (June 12, 1941 – February 9, 2021) was, as a young piano and key board player, a member of Miles Davis’ band so could be said to have been present at the birth of Jazz fusion. Amongst his other styles he took Fusion to its heights with perhaps his most famous band that included many developing Jazz musicians of note. This clip of that band, ‘Return To Forever’, is from 1974 and includes bassist Stanley Clark. Enjoy.

*. There are a number of versions of ‘Waiting For Godot” and “Endgame” available to stream on pay per view theatre websites. I particularly recommend Michael Gambon and David Thewlis in “Endgame” for free on You Tube. Beckett’s ‘Happy Days’ is scheduled to start at the Riverside Studios in Hammersmith as soon as allowed.

** With acknowledgment & thanks to Tim

Also big thanks to Lucie who suggested writing something in the style of Beckett.

A version of this Blog has already appeared in local news and views website https://chiswickcalendar.co.uk/