Chiswick UnBound – A Conversation in The Raven

Chiswick UnBound – A Conversation in The Raven 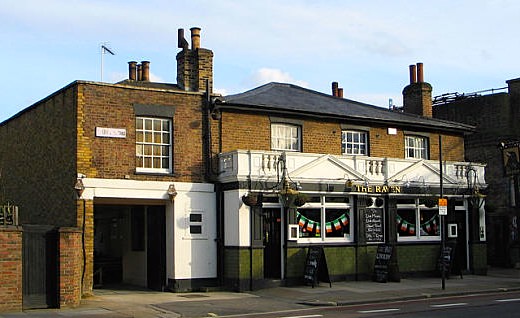 “I have heard him assert, that a tavern-chair was the throne of human felicity.—’As soon,’ said he, ‘as I enter the door of a tavern, I experience an oblivion of care, and a freedom from solicitude : when I am seated, I find the master courteous, and the servants obsequious to my call; anxious to know and ready to supply my wants : wine there exhilarates my spirits, and prompts me to free conversation and an interchange of discourse with those whom I most love : I dogmatise and am contradicted, and in this conflict of opinion and sentiments I find delight.”

I am sure there isn’t anyone who has read these Blogs that does not know that I hold my local pub, The Raven by Stamford Brook Station, in high esteem. I would say, over the years, I must have drunk in most pubs in W4 and W6 but I have settled on The Raven as my local simply because it is what I would call a proper boozer. But what does that actually mean? Well, it is hard to fully explain if you don’t actually get what I am talking about. It is certainly about a decent selection of beer particularly, with at least one good quality ale though probably more. It has to be natural – that is not tarted up with fake beams and woodwork. It will probably do food but not see itself as a gastropub where the locals who are just there for a pint get squeezed out – a fate that has certainly befallen too many places over the last few years. It might have a television but this should not be overly dominant. These days a reasonable choice of wine has become critical too. Yet all of these do not a ‘Local’ make. It is about the feel of the place that you can sense when you walk in. There’s a welcome about a great pub, a kind of relaxed warmth that comes from people feeling comfortable, as if they are, and this is the key phrase, at home. After all a pub is a ‘public house’ not just a bar….. and the person who sets the tone for this feeling is the publican: ‘The Landlord’.

Dave Finan is the Landlord of the Raven. Over the last couple of years I have got to know him a little with the odd ‘over the bar’ banter about rugby and when will he stock my favourite beer (Timothy Taylor’s ‘Landlord’ and does now when he can get it). Since the Covid lock down eased off we have been trying to find time to sit down for a conversation about the trials and tribulations of running a pub during the pandemic and his hopes and fears for The Raven and the industry in general. We finally managed to sit down at a quiet table for a few moments one day last week.

I guess I could have guessed the reply but as we opened our conversation I asked Dave about his philosophy for The Raven and he was very clear – to be a ‘Community Pub’. I thought this accurately reflected what I experience along with the other locals who are regularly to be seen at the bar (before Covid, obviously) or at their favourite table or booth. I thought his response was a mature one for someone who is still relatively young – I didn’t ask him but I am guessing mid-30’s. I know he has continued the pub’s traditions like supporting local residents during the annual Ravenscourt fireworks displays and taking care of the Queen Charlotte’s hospital baby book – more of that later. There are regulars who catch the bus in but most that I have spoken to live in easy walking distance – local locals.

Dave hails from Loughglynn, a village in County Roscommon, Eire and both sides of the family have a history as publicans. There is a photo in the pub of a very young Dave in the Silver Swan Hotel in Sligo pouring his first pint of …… no, not Guinness but Smethwick’s…. for his father. 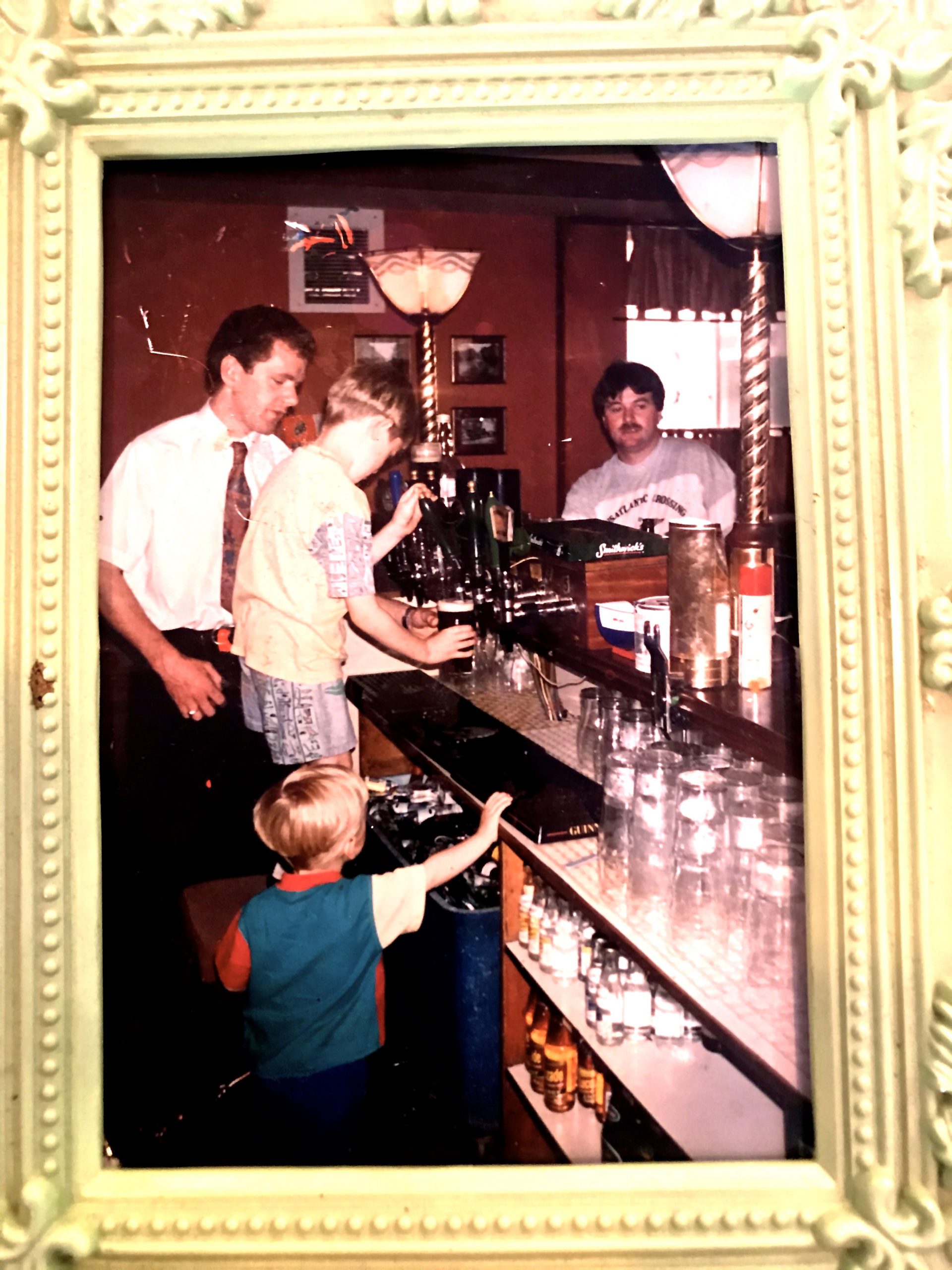 An uncle managed the Falcon pub in Clapham for well over twenty years. When most of his mates left Sligo to travel the world Dave decided it was time that he too should move on and his uncle sent him to a fellow Sligo publican in Ealing with instructions to offer to work for free until he was deemed good enough to be paid – which took just three days. After a while he applied to Ealing’s New Inn as a Duty Manager and begun the partnership that has seen him be part of a small team that owns The New Inn, The Raven and more recently set up a group to also take over the Green W7 in Hanwell.

Dave actually took over The Raven about seven years ago and found it in disarray – he had to bring in his own team to run it and 34 customers were banned within the first few days. Over the years he has expanded into the rear area of the 180 year old coaching Inn, sorted out the yard into a small beer garden and invested heavily last year in a new kitchen, all without changing the original atmosphere of the place. Dave is particularly proud of the maternity books from Queen Charlotte’s Hospital when, traditionally, fathers would come into the Raven for a post-birth celebratory beer, sign the book and leave a message for their new-born child. The books include well-known names such as Steve Jones of the Sex Pistols and American Jazz singer, Marion Montgomery’s daughter Abigail. The list of celebrities contained therein also includes Daniel Radcliffe, Emily Franke, Mischa Barton and Dame Helen Mirren. Dave was distraught when someone came in to see the book after her daughter tragically died in an accident as her birth had been recorded there – only to find someone had torn out that page because it had Ringo Starr’s writing when he recorded his son Zak’s birth. They now have to only allow inspection with supervision. Who ever that was definitely qualifies as my anonymous ‘Dick of the Week’.

If that was one of Dave’s worst experiences running The Raven the last few months of Covid have been a marathon of challenges. During the lock down the rateable value of the building was too high to qualify for any local government grants and an intractable owner/landlord who effectively prevented the pub doing takeaway food and drink meant financial worries were bad enough. (*) However, as a socially focussed business where some of the staff are family and live upstairs, when customers have become friends and many will have fallen into the vulnerable category, it was people worries that provided the biggest headache. When the chance to reopen came, despite meticulous planning and rigorous staff training, not to mention hours of putting the entire menu (down to every flavour of crisps) into the online serve at the table app, the biggest question was ‘would people come back’? As someone who was there at 12.20 on July the 4th (twenty minutes after it opened) and made it on to a Dutch TV stations news broadcast, I know the answer.

Sitting in the garden that sunny day it was clear that those who first turned up were regulars and Dave has admitted that ‘knowing the people’ made it so much easier. I notice there is a now kind of unspoken bond between those of us who have stuck with it. Even so, his pedometer registering over 17 kms over a 17-hour shift shows it was a physically demanding, if rewarding day. Losing 18 standing spaces but adding a few seated table places has changed the dynamic slightly but my own experience is of a responsible and relaxed atmosphere. To be honest I do avoid busy football times and there have been days of big matches when Dave has had to stick to bookings and turn people away. Frequent cleaning and toilet checks and 12 sanitizers in the front bar alone reflect attention to detail. I was also interested to know that Hammersmith & Fulham Council have checked his Risk Assessment and made two unannounced spot inspections including one at 9.30 on a Saturday evening. Generally, his original criticism of Westminster’s handling of the crisis has been more muted (his might have but mine hasn’t obviously!) since the ‘Rishy Dishy’ scheme that he sees as responsible for persuading many people to take the plunge. In common with other landlords I have spoken to Dave has seen a change in the normal pattern with what would have been quieter times now having more drinkers and diners with less volume at previously busier times. Also in common with others in the industry his biggest fear is the second wave. While he is doing his best to be responsible he is critical of other places that are less diligent and could encourage another enforced lock down. Well, I have been to a few of those myself and not returned since. I have my local where I know where I stand – well, sit now, to be accurate. I am a traveller by nature. I spent much of my life living and working overseas and I still love to roam. Then again, I appreciate the coming home – my own bed, my own bog (That’s too much information. Ed.) and a pint in my own local.

Now, before I round up…… Dave is another man who loves his sounds. Don’t even start him on the pub’s playlists, all proudly curated by himself. So, I had to give him the chance of a choice of a music video to finish. His immediate one is a surprise and reflects a man with an emotional connection to his music and I offer that up.  https://www.youtube.com/watch?v=_r9d4oyG2ag

However, as the final offering we decided to go with something that seems to ring a bell in these days of social distancing and no more leaning on the bar. We give you a classic from the 1980 Police Album ‘Zenyatta Mondatta”. This was their third album and for me this was the start of the period when Sting crawled up his own arse (**). However, I did buy the first album when it came out and still think ‘Roxanne’ one of the great songs from that immediate post-punk era. 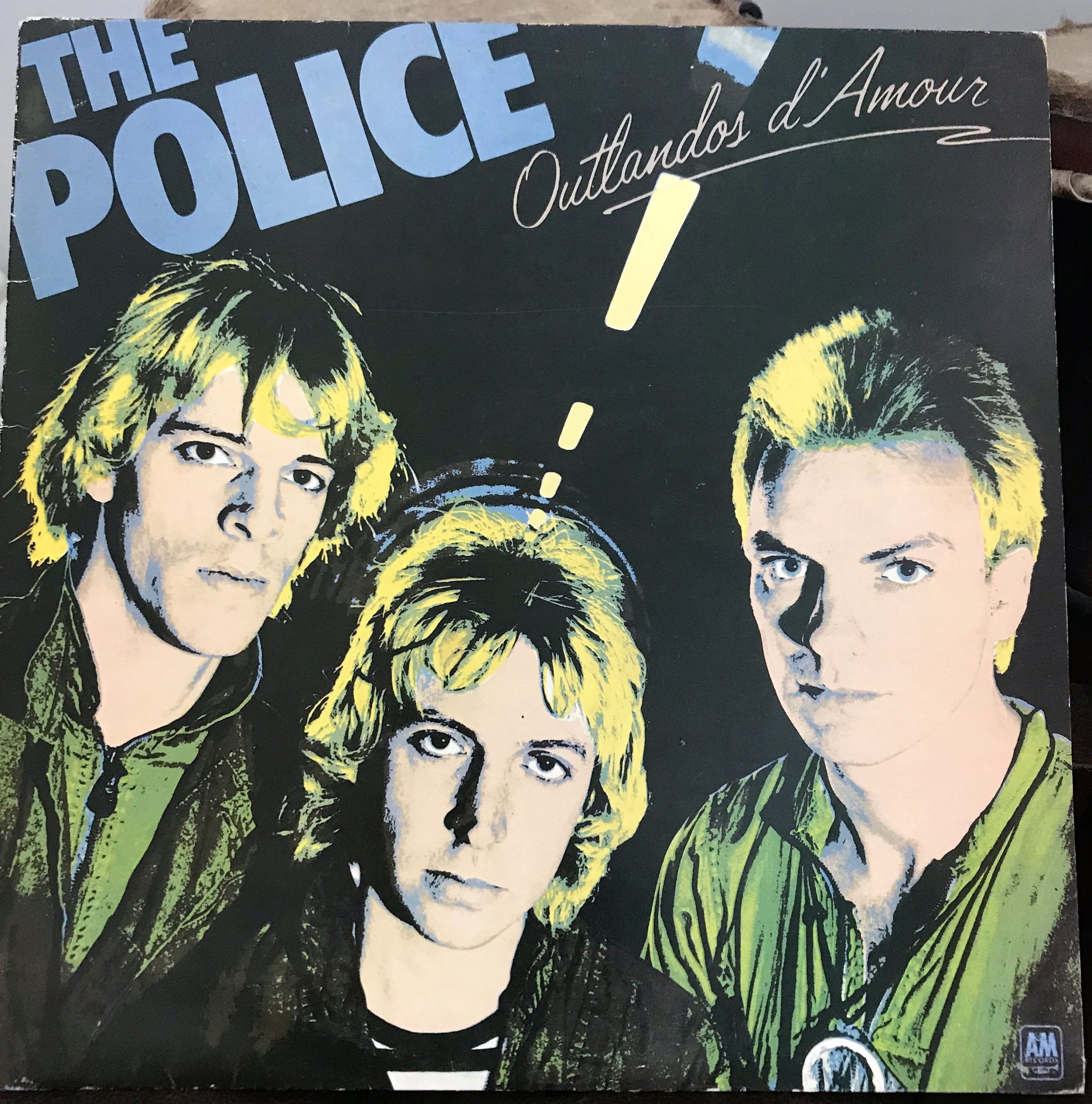 There’s no doubt that Dave’s selection is more appropriate……   https://www.youtube.com/watch?v=1BilcU-ZlLE 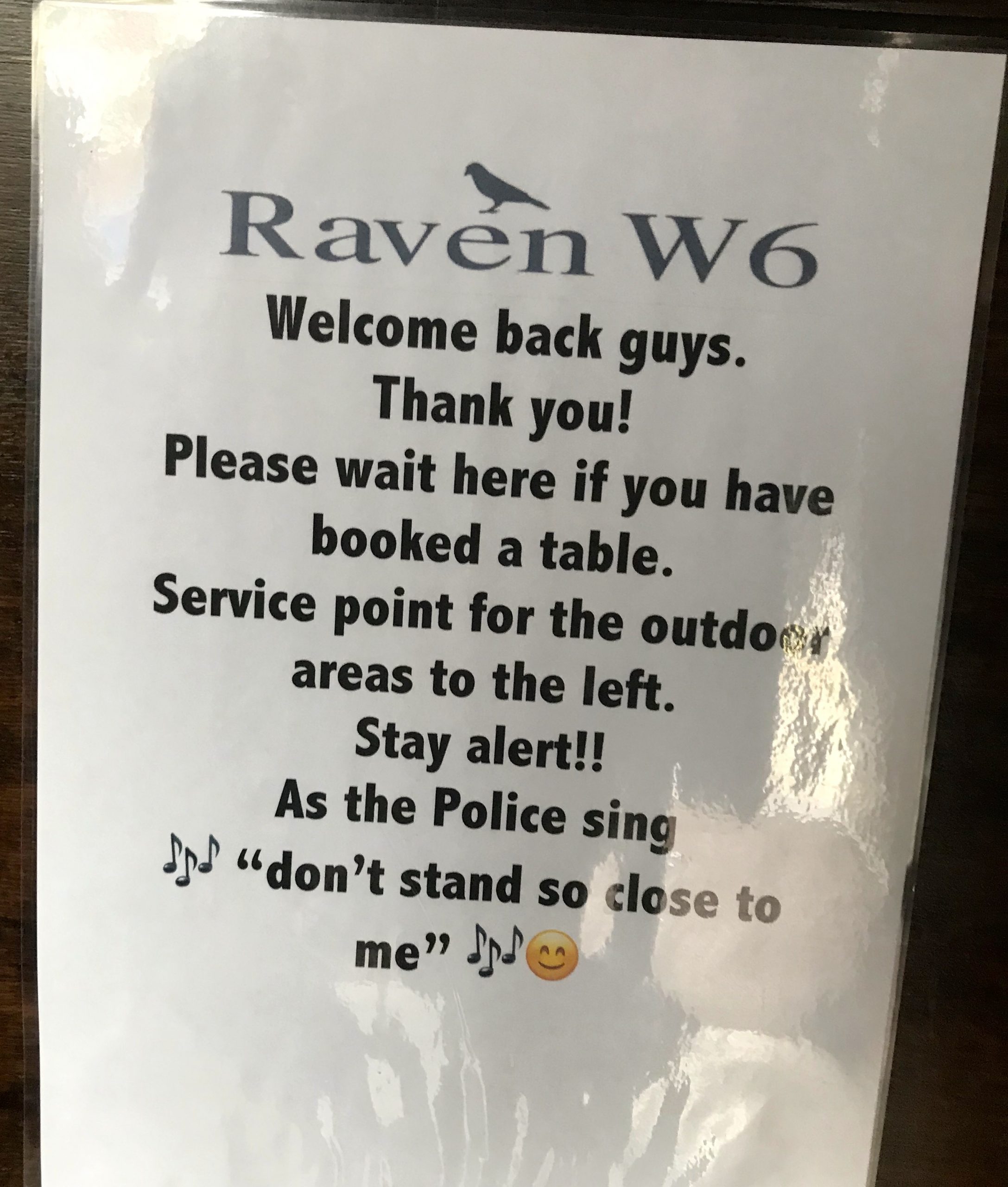 *Dave was reticent to make any comment but my own research showed the owner and lessor to be Trust Inns. Trust Inns may appear to be about Pubs but they are a Property Company who have been criticised for having very little sympathy for the plight of their 400 plus pubs or the publicans at a time when many are struggling. CAMRA estimate that some 12,000 UK pubs have closed from 2008 to the start of the pandemic and a significant contributor to that is the aggressiveness of the large Pub Co’s and property companies. Many pubs across the country are unlikely to survive the crisis and even in Chiswick three are currently closed down and their future is uncertain.

** “That’s a bit harsh. Ed.” Oh, really? say I – it’s only a reference to one of his favourite tantric sex positions, honestly!