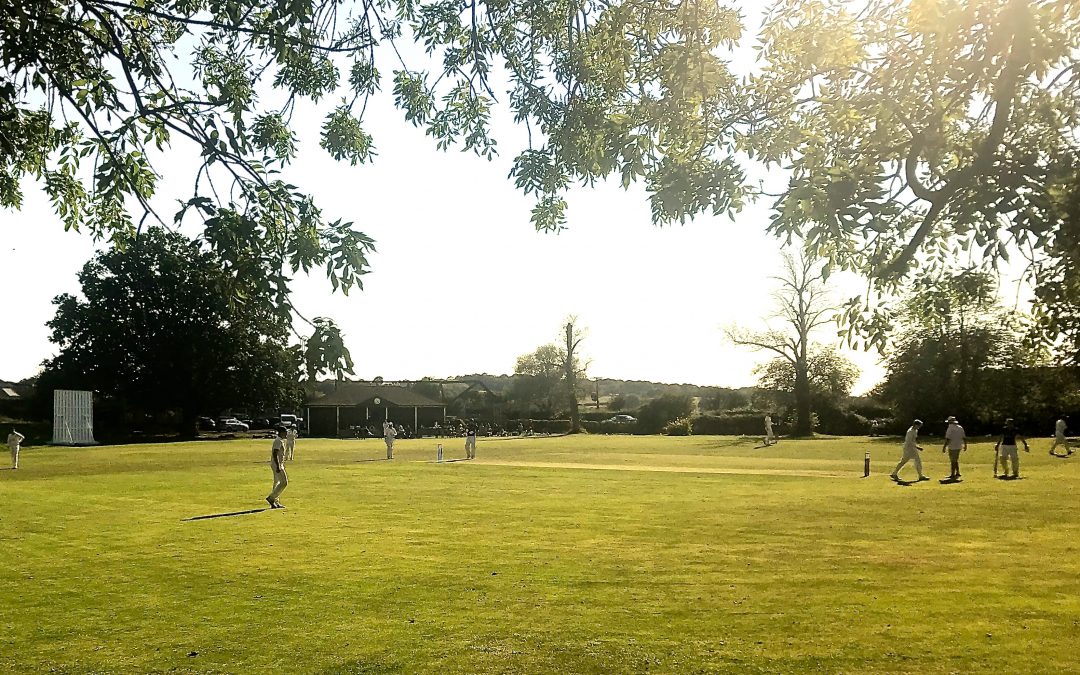 “Out in the country,
Far from all the soot and noise of the city,
There’s a village green.
It’s been a long time
Since I last set eyes on the church with the steeple
Down by the village green.
‘Twas there I met a girl called Daisy
And kissed her by the old oak tree.”

Someone had the nerve to ask me the other day “Keith, do you actually live in a pub?” Well, frankly, I thought that was a tad excessive and I had to respond that I thought the person was casting aspersions. * Having said that, today’s post is a short one, as I am still on a little ‘leap unbound’ down the South Coast, and I am going to talk about pubs again.

Now, I have discussed the joys of a local and of a tour of city pubs but one of the great joys of the great British institution of ‘The Public House’ is that there are a great many varieties and they vary regionally. Some of those regional specificities are being eroded by the homogeneity of the large pub chains but there is plenty of quirkability to be found. (Is that a word? Ed.) The actual buildings and physical lay out vary, so, just as an example, a small urban working class pub would have had as the main bar a room where working men could go, still in their working clothes, (often the ‘Public Bar’ or the ‘Tap Room’) whereas the room where they could take their wife would have been small and often called the snug. If it were a slightly smarter place it would have a larger room, possibly with some carpet, called the Saloon bar or the Lounge but all these names for different rooms vary across the country. These days many boozers have been knocked into one single room, which is more practical in these days of equality (well, some improvement anyway) but has diminished the character. Even what would be called the ‘country pub’ has wide varieties. The small pub frequented by shepherds and drovers would be more akin to the urban workers pub whereas the larger places on main roads and in the squares of market towns would have been Inns. These would have provided food as well as accommodation for travellers so are much roomier. This is not meant to be a history or a serious consideration of pubs but more of a background to my meanderings. You see, while I clearly love beer, it is the opportunity for conversation that is key to my selection criteria and generally smaller pubs, originally for the working-man, are where you tend to find the best opportunity for conversation.

Now, over the last few days, having hired a car, I have been pottering around the south coast. I would like to call it perambulating but is that term allowed if I am driving? Keeping off the main roads I have dropped into Deal, Winchelsea, Hastings and St Leonards as well as Hove. My two favourite pub stops on my wandering have indeed been smaller places, quite possibly originally catering to fishermen or allied tradesmen although the fist one, The Horse & Groom in St Leonards, was actually built in 1829 for workmen building the new town. 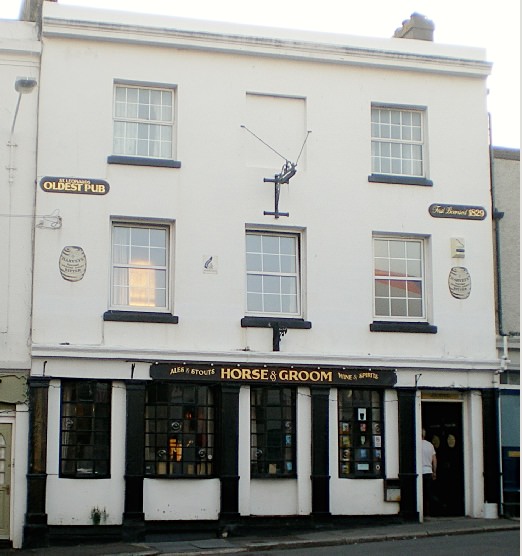 I can describe it no better than local graphic artist and occasional writer Erica Smith who in 2014 wrote in The Hastings Online Times ….

“My favourite local pub is the Horse & Groom up at the top of Norman Road. It proudly boasts its history as the oldest pub in St Leonards and is a fine example of what I have always called an ‘OMP’ – an ‘Old Man’s Pub’. That’s not an insult, it’s just a special kind of pub. You enter and there’s usually a warm, quiet atmosphere – a bit of chat at the bar, a few small groups of people sat around tables, a solitary chap reading a paper with a well-behaved dog at his feet. And no background noise. No hits of the 80s, no heavy rock, no dub step, no sport on the telly, no expectations to talk to anyone else, not even the person you walked in with. Just lovely, warm, quietness with well-aged soft furnishings and carpets to cushion any sound that might otherwise bounce around. The primary assault on the senses is the reassuring happy smell of well-kept ales. Bliss.”

The second Pub I liked so much, I went on both evenings I was in Deal. 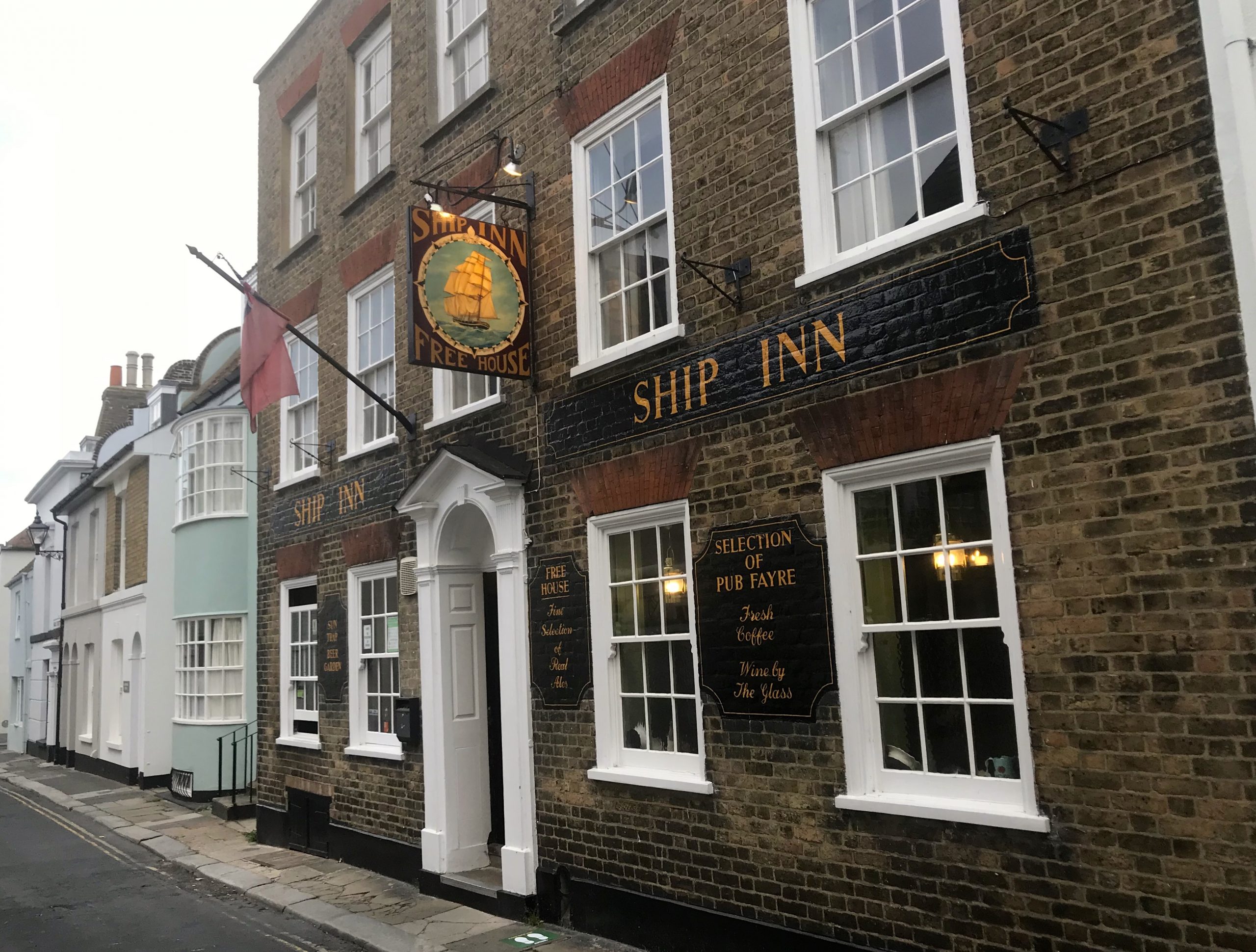 One review I saw referred to the 1500’s but a more realistic date for The Ship Inn seems to be 1764. Erica’s review of The Horse & Groom could equally apply to The Ship. On my second visit the small bar had three tables occupied by small groups of geezers of a certain age who as well as conversing across their table occasionally commented to each other across the room, including me into the broader conversation. In the time it took to sup three pints of good ale I had been given insights into the demise of Kent’s coal industry, problems for the local inhabitants caused by the town’s gentrification particularly since the sell off of council houses in the 80’s and the expensive eating habits of one of the regular’s dogs. I particularly enjoyed my conversation with a gentleman called Mick who had been born into poverty in London’s East End, only to be awarded a scholarship for wounded WWII soldiers and becoming a surveyor. At the time of his retirement 35 years ago (yes, he was 95 years old) he was the deputy managing director of an international building firm, which was when he moved to Deal. According to the others that did not qualify him as a ‘local’ yet but after thirty years they are willing to consider the possibility. He only drinks ‘halves’ these days. The 90 minutes or so I spent in their company was deeply satisfying, particularly my natter with Mick. That to me is the joy of a proper pub conversation!

Talking of gentrification: I was also recommended another pub down the road from Deal in a hamlet called Kingsdown (by Walmer): The Zetland Arms. If there was a classification called ‘beach pub’ this would be one but I am not sure there are enough to be a ‘type’ of their own. I had one local suggest it, while another said it had been ‘poshed up with fake fishing nets and all that shite’. Well, the beer was decent and it did not seem too gentrified until the Ploughman’s Lunch I ordered turned up. As part of their Covid protocols all food was served outside (on the beach) in paper bags so I did not realised that I had been served an abomination. Inside the bag was: a big chunk of cheddar cheese (tick), pickled onion (tick), Branston pickle (tick), a side salad (well, ok these days so I will give a tick) and then – Oh For Fucks Sake – Focacia Bread! Don’t get me started on that rant! A Ploughman’s wants, no demands, a chunk of crusty bread. At a push I could accept a half a baguette – at a push mind – but bleedin’ poncey Focacia! That, my friends, counts as one gentrification step too far. 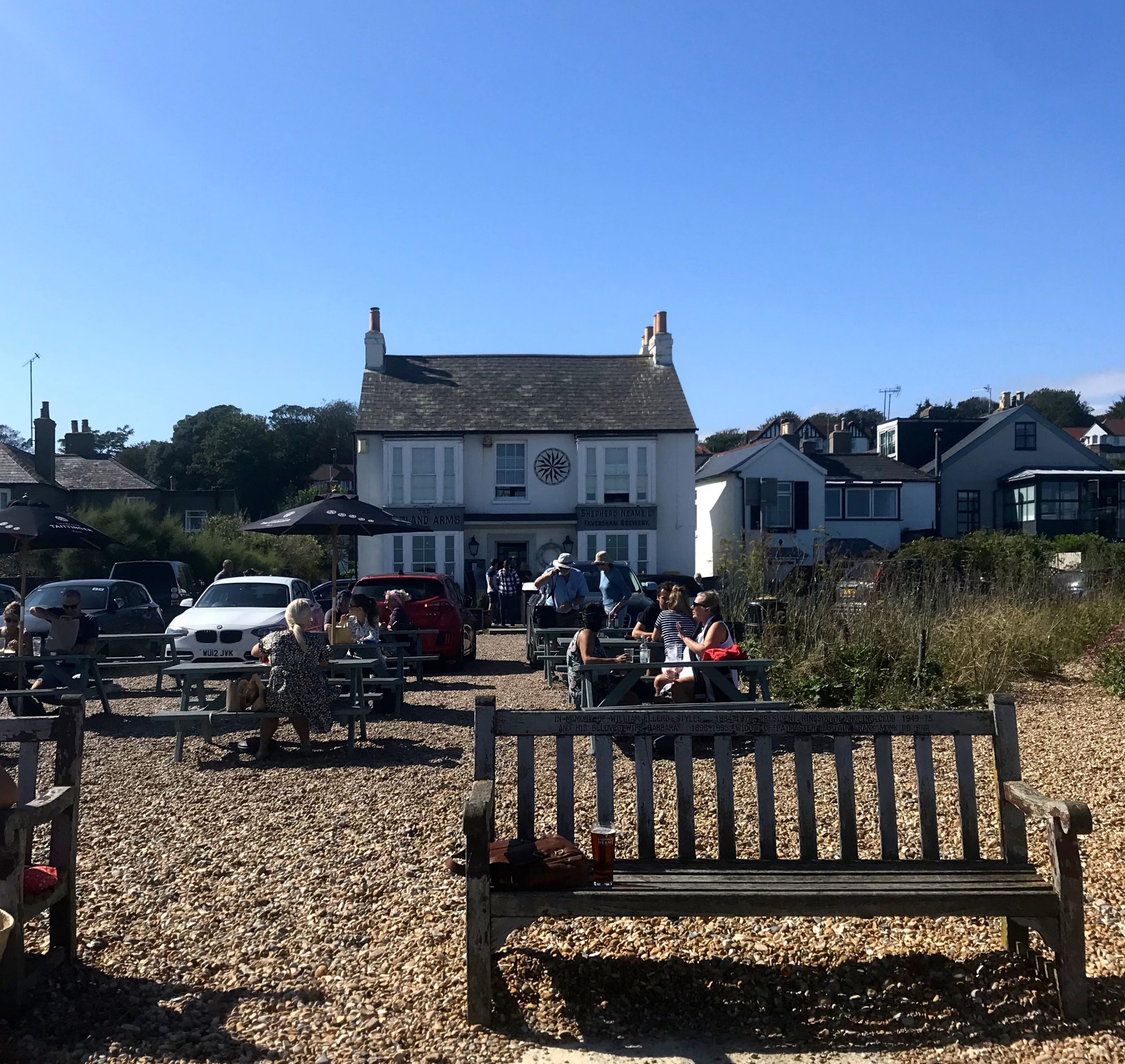 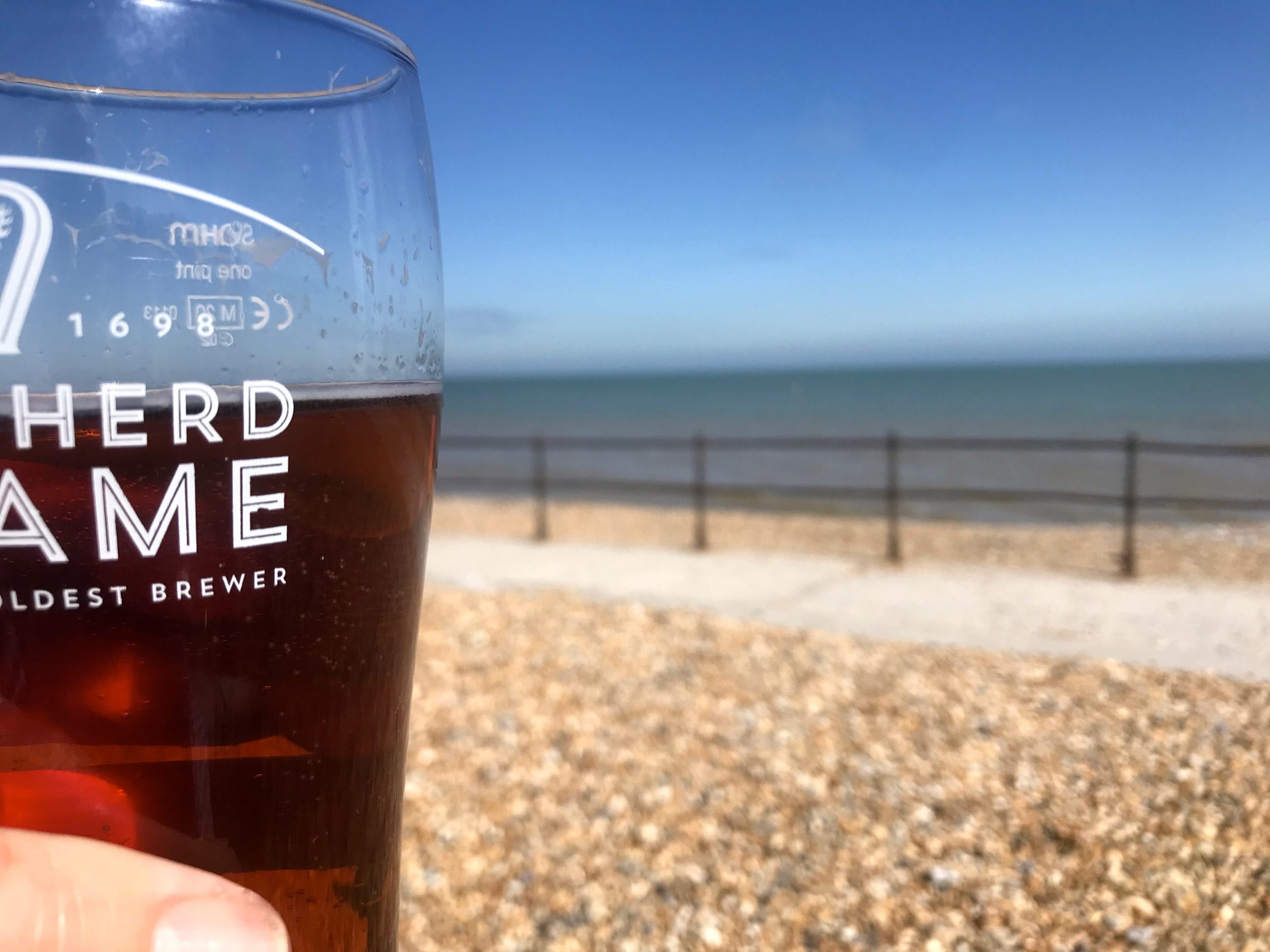 I was not happy with the Ploughman’s Lunch but the pint on the beach on a sunny day was a treat.

Finally, there is one more type of pub that deserves my commendation. There is a special place in my heart for pubs that overlook the village green, especially when there is a cricket-pitch on the green. To sit watching the cricket, sometimes from the pub garden and sometimes on a bench, with a pint in your hand is a profoundly meditative occasion. No random pub conversations are necessary but rather the distant sounds of the village and the ‘chock of leather on willow’. For me there is a gentle melancholy to the warm evening sitting by the village cricket ground, an introspection that can be shared only with the friend who can sit next to you on the bench, silent too in contemplation. When my mother died and I stayed for a while with my father we spent several afternoons on a boundary bench at the Devon village cricket ground in quiet companionship, the silence broken only by the odd appreciative comment on a cover drive or a throw in from the boundary. This Sunday I was able to sit with mate Andrew as we watched the rustic efforts of Newenden Cricket Club though unfortunately as were driving, with no pint in hand, even though The New Inn was just behind us.

As the late summer sun slipped behind the trees on the boundary I had that feeling that as I was to drive back to Chiswick that evening, I was about to lose the freedom of my week’s ‘perambulation’. As Covid cases rise and we are about to embark on ‘the rule of six’ I am concerned that ‘UnBound’ may yet become, once again ‘Confined’. In that slightly more sombre mood and with the last warmth of the sun’s rays creeping across the outfield I am reminded of Roy Harper’s timeless folk artistry and “When An Old Cricketer Leaves The Crease”. As we head into another corona-tainted period that is how I will leave you …….   https://www.youtube.com/watch?v=RILkCz5VIf0

*This led me to think: “actually what are aspersions and why do people caste them?” I mean, I know there are two old blokes that have got very popular on the telly casting fishing lines but: aspersions? Some bloke in the bible caste out swine and even that doesn’t seem comparable (com parable – Geddit? Vey Funny! Ed.) Anyway, so having used the phrase I thought – “so what ARE aspersions”? So, apparently ‘aspersion’ was originally the sprinkling of water – usually in a religious context such as a mass baptism. It was later in the 19th century that it began its journey into negativity – the on-line ‘Free Dictionary’ says “….. in the 19th century any reference to female sexuality was considered a vile aspersion”; and quotes as an example: “it is difficult for a woman to understand a man’s sensitivity to any slur on his virility”. Blimey, who knew? I was only saying my mate’s comment was ‘unnecessary’. It was a saying once used commonly in my experience but must have fallen out of favour because the Merriam-Webster dictionary says that it is in the 10% of ‘least used’ words but does agree it means “to say harsh critical things about someone or someone’s character” which was exactly my point. To say I practically live in pubs is harsh and critical thing to say about my character – innit?”