Chiswick UnBound – Libations, Ghosts and Cultures: in consideration of Halloween

Chiswick UnBound – Libations, Ghosts and Cultures: in consideration of Halloween 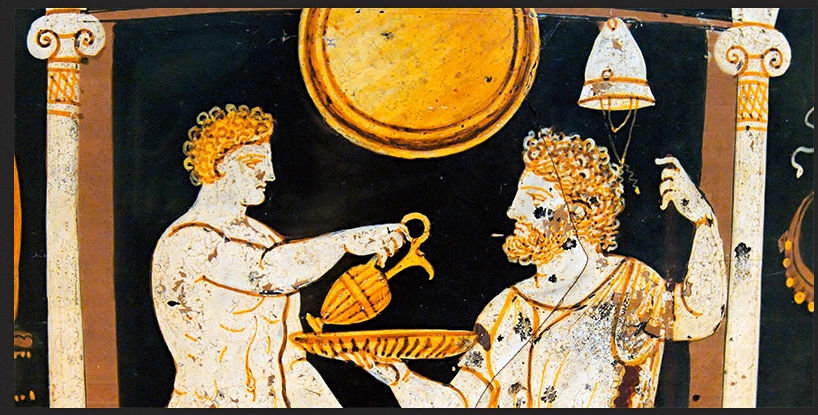 I am writing this on a gloomy Saturday afternoon, darker than normal as rain-laden clouds dump their load on the roofs I can see stretching east from my balcony. My mood is reflective rather than downbeat as I ponder the coming evening when Christians have long since honoured the souls of the departed. The roots of All Hallows Evening are entwined deep into the psyche of the superstitious or the faithful, depending on your beliefs, quite possibly including pre-Christian Celtic rituals. Originally the time when families respectfully communed with their ancestors, the darker side of religiosity brought out the fear of less friendly spirits and rituals to appease these disturbed souls became part of the festivities. The tradition of good Christians baking ‘soul cakes’ to share amongst those praying for the souls of their loved ones has morphed into ghoulishly attired kids threatening random acts of vandalism unless given more sweets than they can eat. Nowadays the rampant Americanisation of our culture has taken Hollywood-like myths of ghosts released from their tombs, flying witches and slimy green demons to the next level of commercialisation.

Of course many cultures across the world have ceremonies to celebrate their dead. Some seem ‘primitive’ to our modern eye though compared to the Halloween nonsense that seems pretty rich to me. One that often causes western eyebrows to rise in revulsion is the Famadihana ceremony of the Malagasy people of Madagascar, known as “the turning of the bones”. Once every two to seven years, each family holds a huge celebration at their ancestral crypt where the remains of the dead are exhumed, wrapped in fine silk, sprayed with wine or perfume, and brought out for community festivities. In the Malagasy culture, the turning of the bones is a way of maintaining links with revered ancestors, who still play a very real role in daily life. The sight of children pouring drinks and talking to the shrouds of their grandparents look macabre to us but as one foreigner who witnessed the ceremony described, “I came expecting the most macabre of ceremonies but instead found an extreme form of adoration for loved ones that will forever change how I view life and death”. * I suspect it actually encourages a far healthier attitude towards living elderly relatives as well as those that have passed away than we see in the self-centredness of twenty-first century western religion. 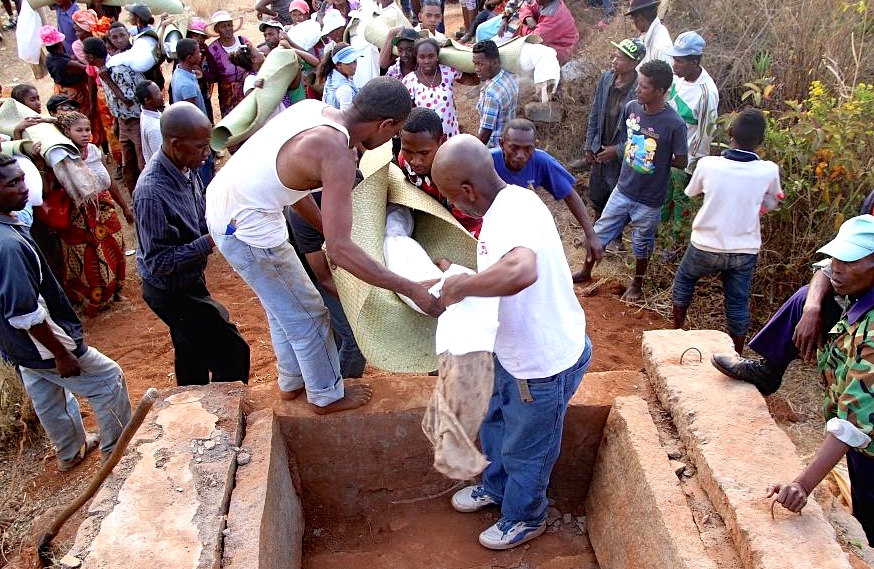 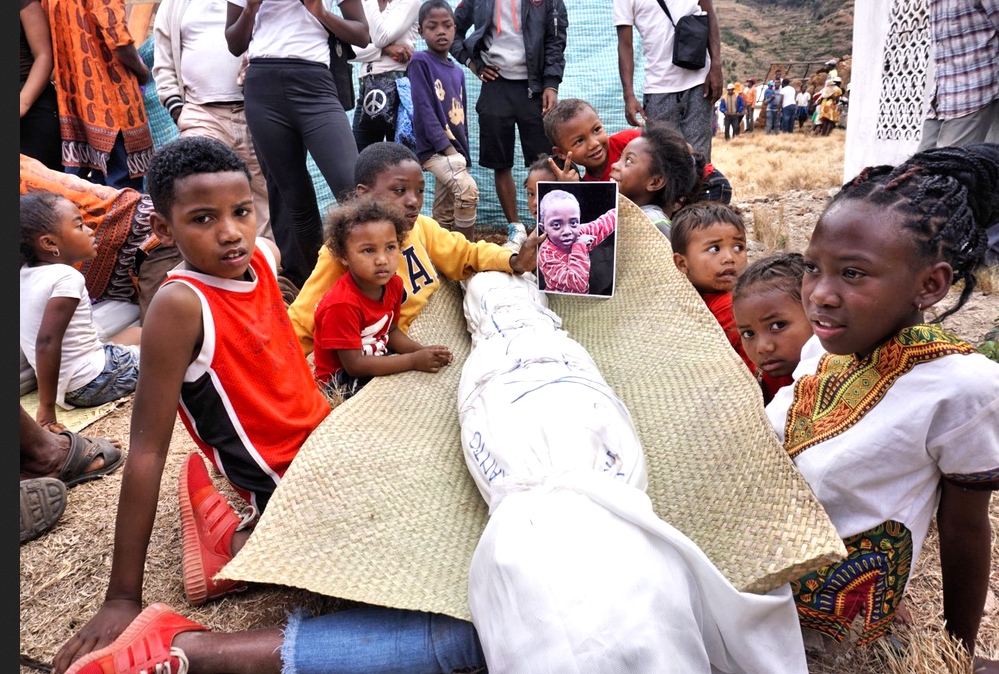 To Children, chatting to lost relatives is a natural expression of family affection.

I find the response of any overly religious person who see their version of their creed as some ‘pure’ form and deny its close roots and connections to the original local gods and deities of its various host cultures as hypocritical or frankly, ignorant. Travelling the world physically or via the amazing number of travel documentary programmes on TV we can understand how our cultures, and therefore our beliefs, do not exist in isolation. It seems so natural to me that we should enjoy the connectivity and similarities rather than to focus on the differences. My long time as a resident of West Africa gave me the opportunity to experience how Christianity has both blended with local religions and at the same time created conflicts with more traditional and indigenous beliefs. I comment on this regularly in my books, as occasionally my attempting to balance the new with the old was difficult particularly when I lived in eastern Nigeria.

“Often there are compromises between the traditional and the more conventional traditions and religions: such as the firing of cannon at Christian Igbo funerals, to scare away the evil spirits. Christians in the west (of Nigeria) will still often have links with the Yoruba traditional religion and superstition is never far from the surface. Many are the time I have witnessed a commotion in the workplace when someone finds some Juju items placed to damage a rival’s career prospects or to punish some affront. Several expatriate wives of Nigerians will have experienced their mother-in-law trying to influence their white daughter-in-law through the use of Juju. Sometimes the line between simple custom and actual local beliefs can be thin. On one occasion in IEA after some building and decorating in my house I asked Eze Alozie to come and ‘wash it’ which includes offering a libation to the ancestors. I saw this as respectful adherence to local custom (and to be honest, a bit of fun) but within two days the staff’s ‘Christian fellowship’ was at my office complaining that I was encouraging the work of the devil. At length I compared their local culture with Queen Elizabeth of England and how respect for our heritage includes her being ‘ordained by God’ and heading certain societies such as the Order of the Garter with connections to witchcraft but these were now deemed cultural rather than spiritual. They left placated rather than convinced.” **

…. and back to Halloween

Back to my Chiswick Saturday, still pondering the weirdness of how modern culture has hijacked more traditional elements and staring out across the still pouring rain, I consider whether when to make my quick trip down the shop for ‘treats’. As ‘grumpy old man’ as I am, I certainly want to be ready when my young neighbours, Maelle and Indica, come knocking. I am tempted to go for ‘Quality Street’ and then steal all those purple ones with caramel and a nut that are everyone’s favourites, including mine. 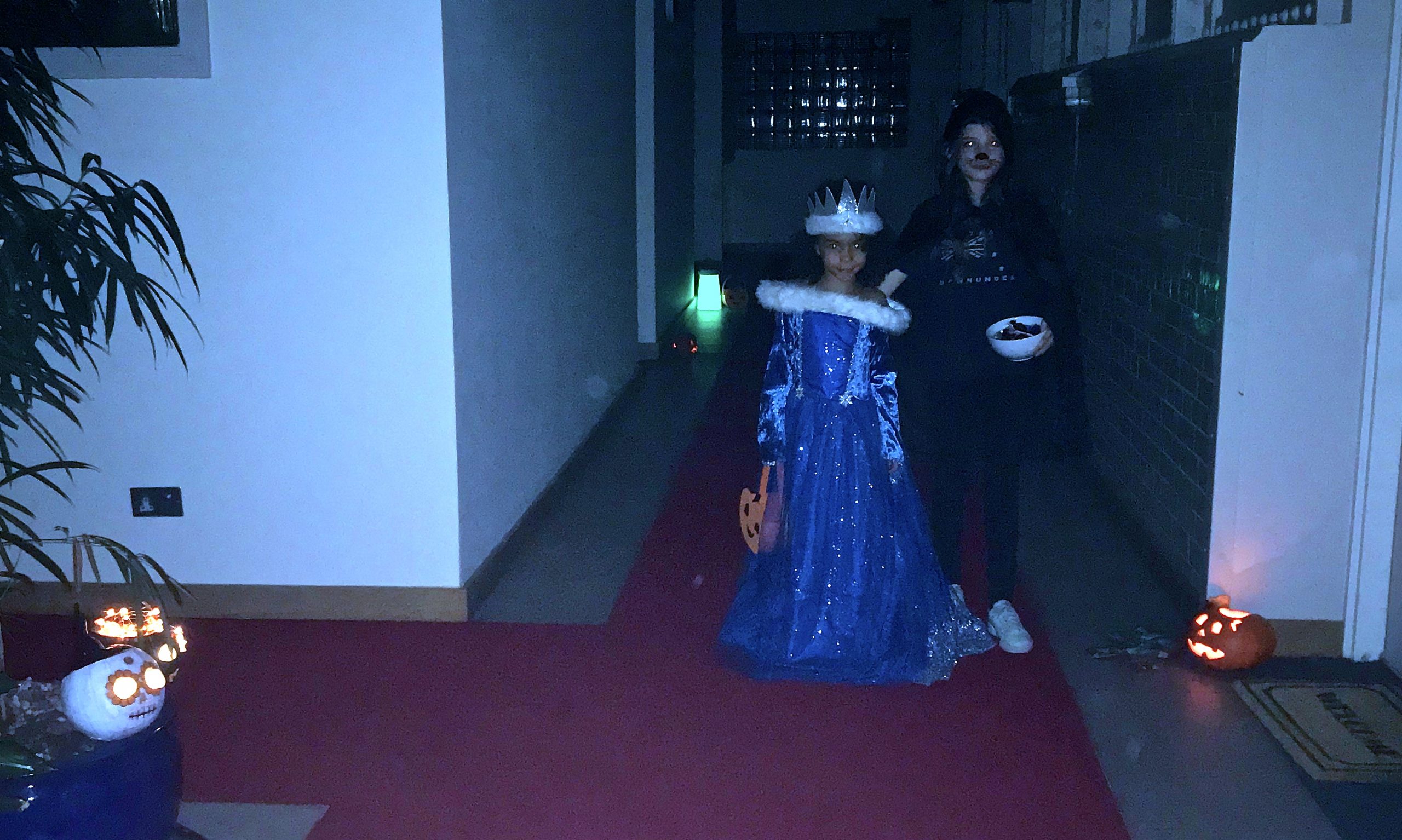 In earlier Blogs I have talked about the pleasure that the increase in community spirit in our corridor of apartments has given me. There are already several pumpkin heads along the communal hallway and I am told the ghosts of two small children will soon be stalking our hallway. I have a feeling that as the Covid crisis ‘re-escalates’ into the 2nd or 3rd wave we will all need to recover that sense of mutual support and respect that we had in the last lock down. I fear that ‘UnBound’ will once again become ‘Confined’. *** The personal demons that bubbled to the surface under the pressure of the restrictions I suspect will be even harder to suppress if current suggestions of a new national lock down, at least until the beginning of December, is announced. Until that decision is made I will focus on the spirit of a damp Halloween Saturday and stuff my face with my sneaky purple Quality Street as I watch the last of the Six Nations Rugby on TV. Yet before I settle down I shall open a new bottle of good Irish Whiskey. Before I take a drink, I shall stand in the open doorway of my balcony and pour a drop, a libation, to appease the spirits. Utter nonsense you might say. Yet in that small ritual, learnt from my older Nigerian friends, there is created a small moment in time to remember loved ones lost. That tradition, actually shared across many cultures, obviously becomes more meaningful the older you get. As I do it, I whisper respect for my own ancestors as the faces of friends and family who have passed away flicker through my memory. I think those Malagasy families honouring their dead just might have the right idea.

“Black Magic Woman”, written by the late great, Peter Green, has been covered by many artists over the years but is, for me, most inspiring when combined with the Latin rhythms of Carlos Santana on his album “Abraxas”. 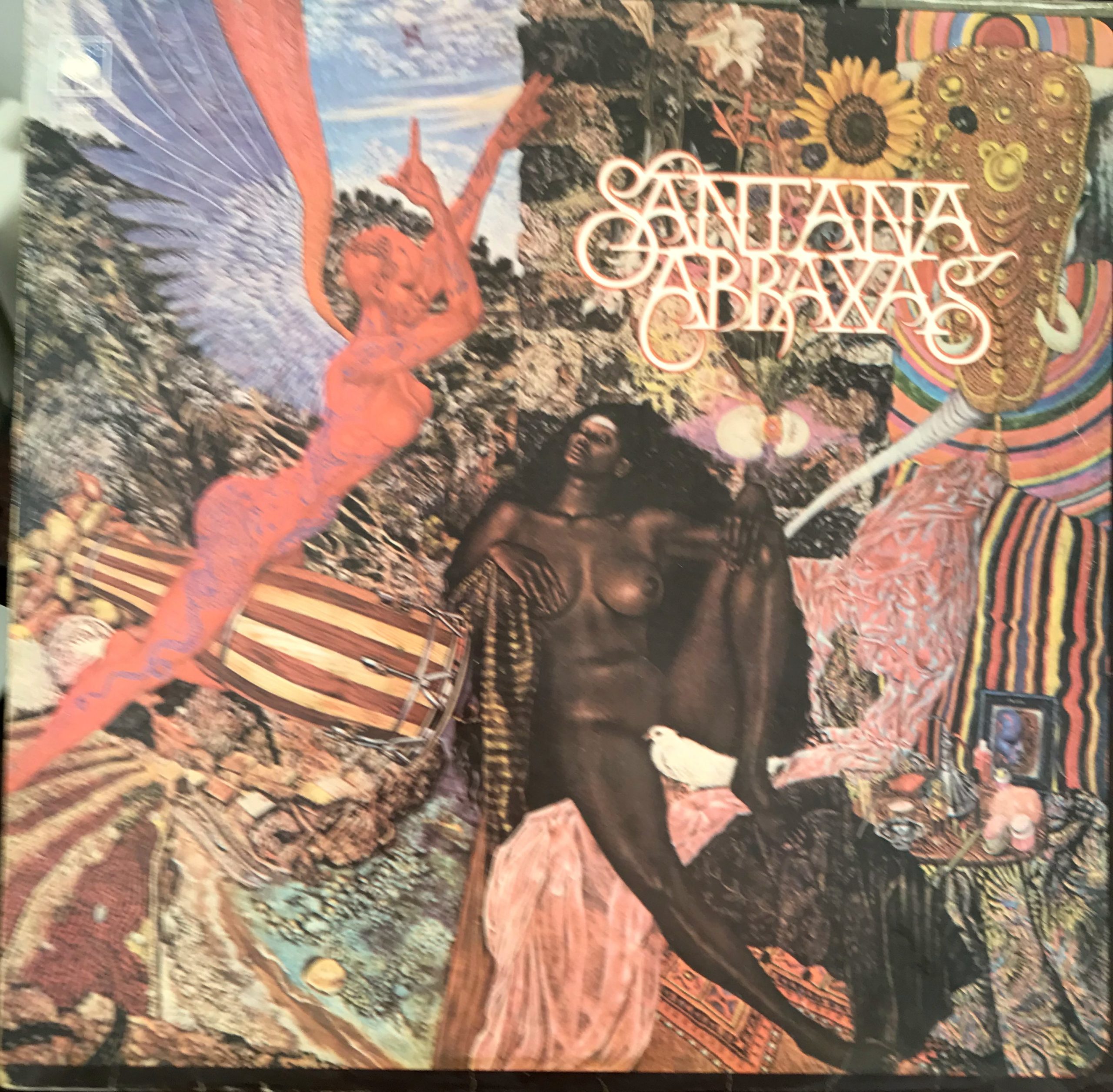 “Abraxas” was Santana’s second album and was released in 1970 and still ranks around No 200 in Rolling Stone’s best 500 Albums. Interestingly the name comes from a quote from ‘Demien’, a Herman Hesse novel, that is actually on the back of the cover. Controversially even Hesse’ use of the word apparently fails to convey its somewhat obscure meaning and it is not clear how it reflects the music. 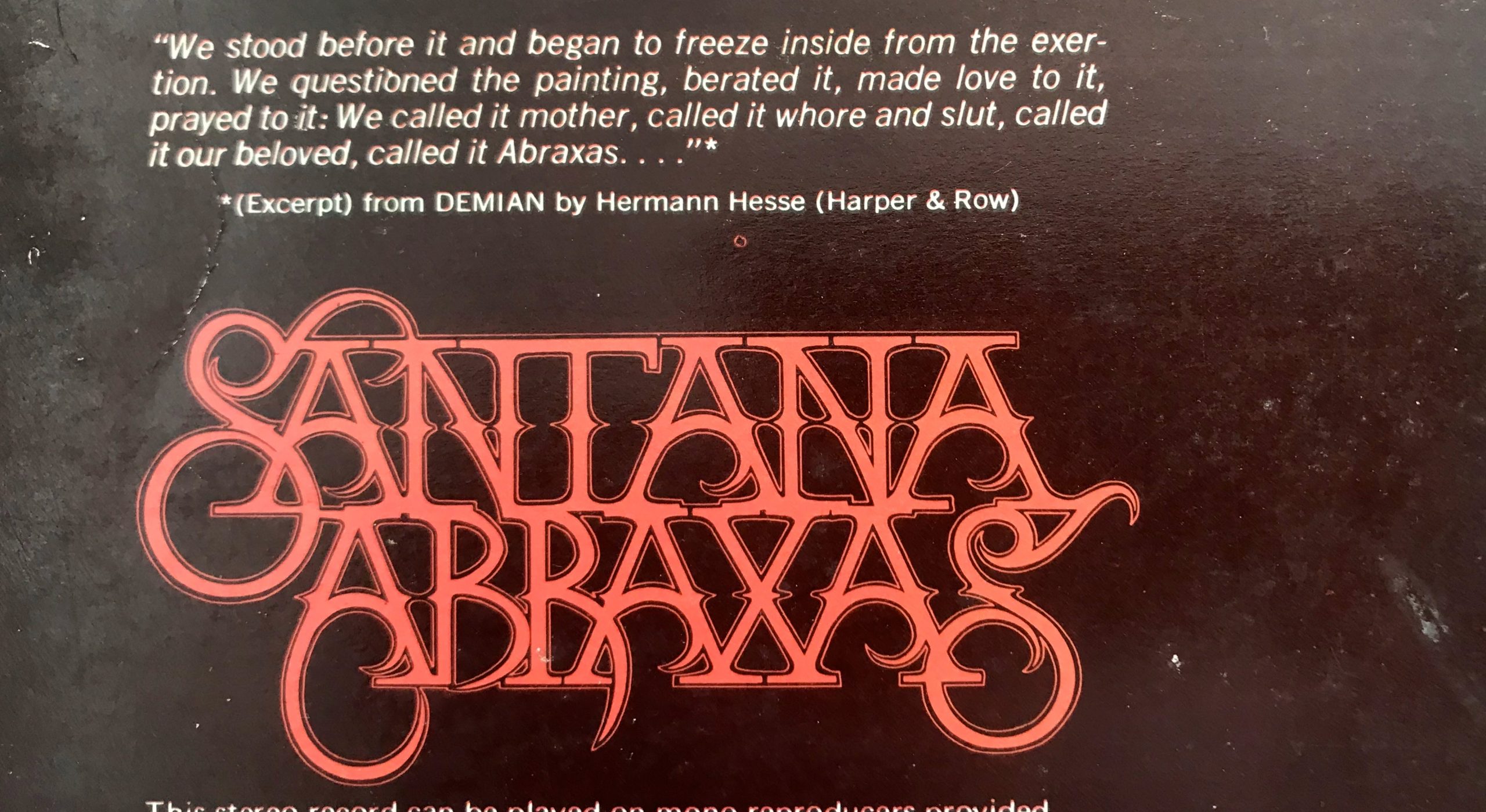 It comes from a Greek word abráxas, abrásax, abrasáx, of obscure origin; the combined numerical value of the Greek letters is 365, an important figure in Gnosticism and numerology and is such often found on charms, especially amulets, of the late Greco-Roman world and linked with both Gnostic beliefs and magical practices by the early church fathers. Either way, the track makes a suitable ‘sound off’ for my Blog written on Halloween. I thought about a version from 1970 – you can find it yourself on You Tube to compare to this version from the Montreux Jazz festival in 2011. Carlos Santana just seems to mature like fine wine – maybe Bulls Blood? Enjoy.

** “IEA” the company in Aba, Abia state where I was working. “Eze” a senior Chieftaincy title. From “Never Quite The Insider” Available on Amazon or on this website.

*** So, as we now know, after yet another U-Turn, a gruesome ‘Daemon’ came on TV and announced a full lock down starting Thursday. If ever there was proof that on both sides of the Atlantic as well as places like Brazil, Israel and India were are ruled by forces of incompetence as well as darkness, this is it. I don’t actually have a problem with the Lock Down but rather it should have been done nationally when SAGE scientists recommended it instead of wasting weeks persecuting Northern urban centres – in the same fashion that the Orange-wank-gibbon attacks Democratic States. Clearly, the Orange and Yellow slime crawled out of the same grave. I have already booked my last Raven Sunday Lunch for at least a month and discovered Home deliveries are all fully booked. I would like to think we have learned from the last lock down but I fear not. Anyway, this Blog will be called ‘Chiswick ReConfined’ from next week.

A version of this Blog has already appeared on The Chiswick Calendar.