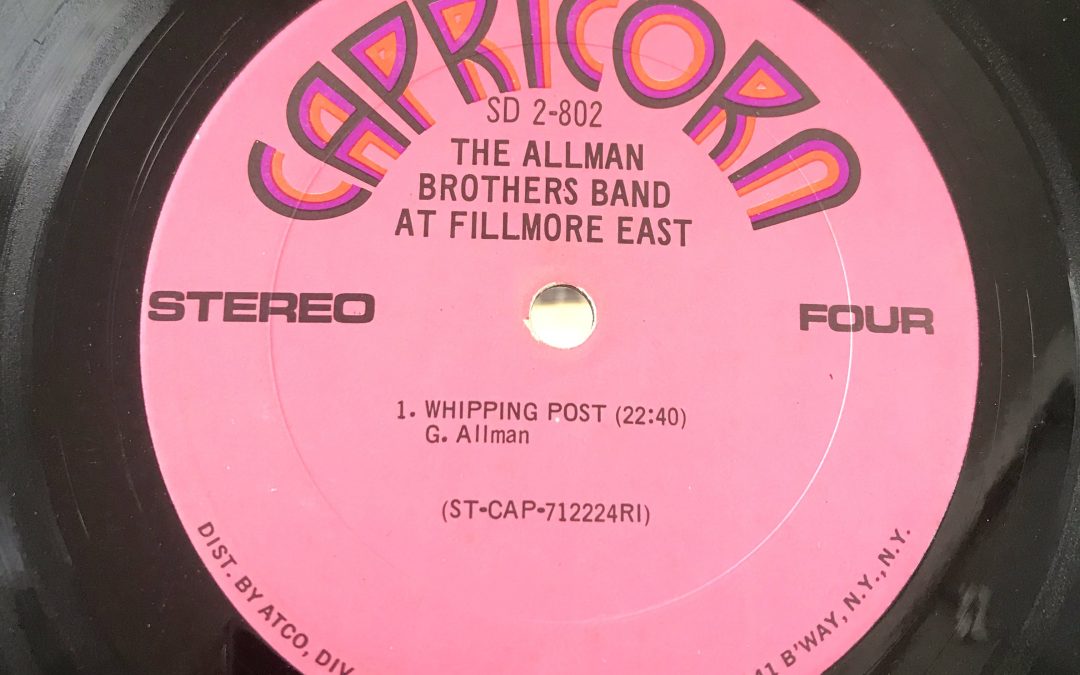 “Pity me not, but lend thy serious hearing
To what I shall unfold.”

I could still walk down to my local shops and wait patiently outside until there is room to keep a sensible distance or I could drive my four-wheel gas guzzler down to Turnham Green Terrace, move the inconvenient bollards so I can park on a double yellow line and push in the queue ‘scuse me mate, I am in a rush ‘cos I saw a traffic warden down there.’ 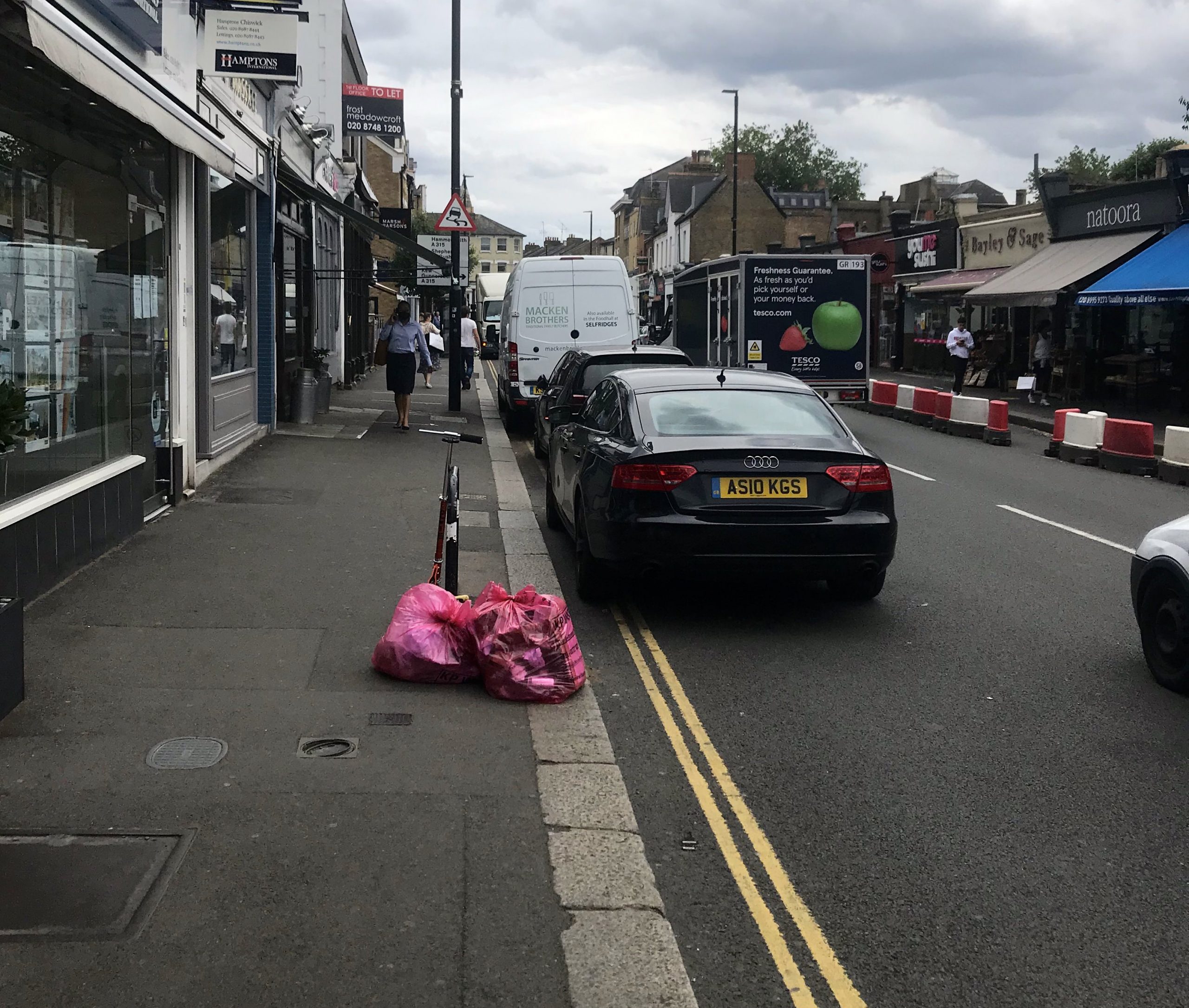 Just coincidentally, obviously. I mean I am not making allegations (*) but just how do Mackens get to park their vans seven days a week on a double yellow line and never get a ticket?

I could go for a walk along the river or in the park with close family or friends and then invite them into the garden for a few drinks and barbeque or we could all just stay in the park, smash a few tins and lightup the takeaway barbeque while getting hammered, ignore what the kids are doing, take a leak round the back of someone else’s drive way and then stagger home and leave someone else to clear up all our rubbish. 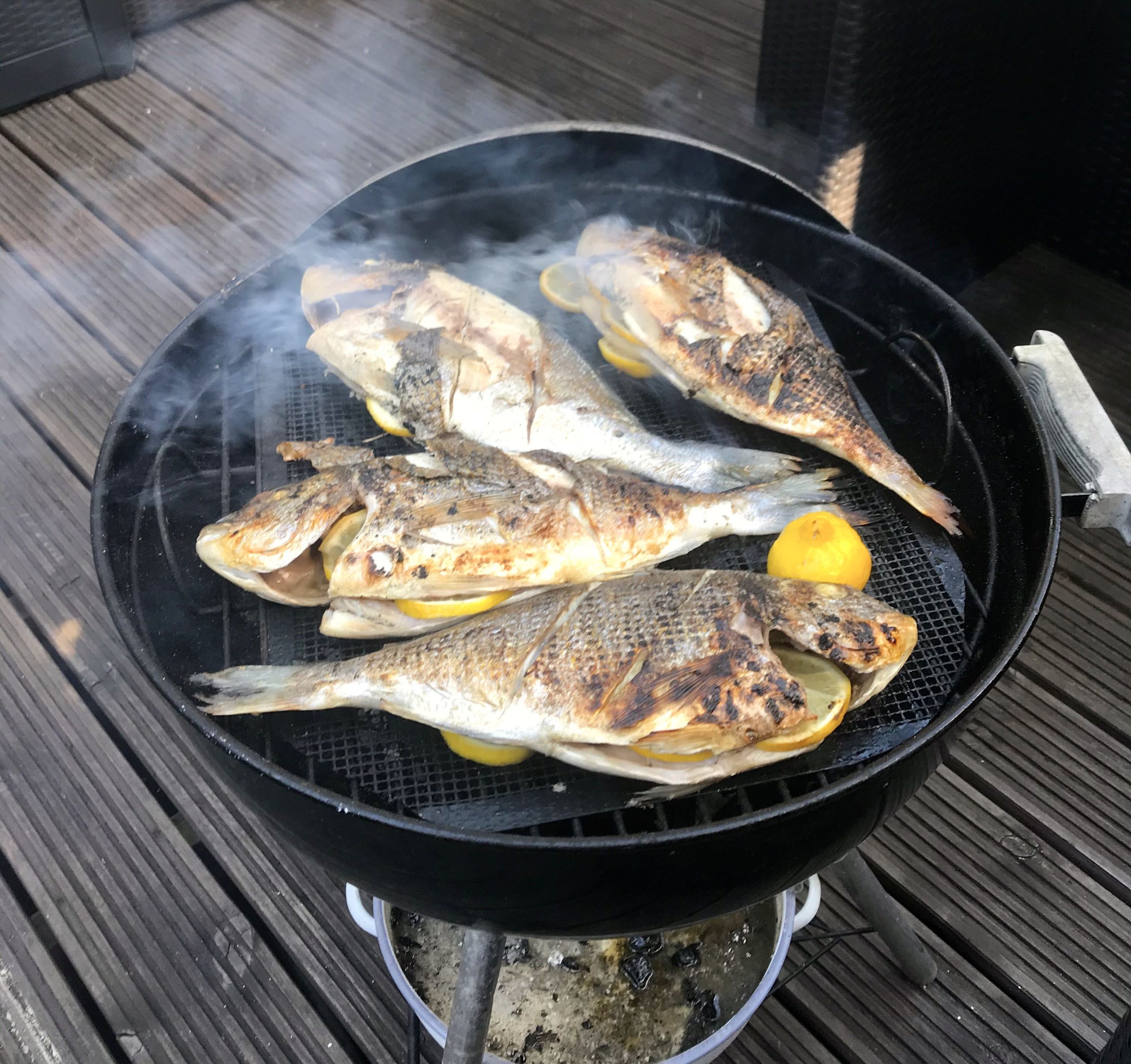 OK, now I am showing off – when I talk barbeque, I mean BARBEQUE. Fresh Bream from Covent Garden Fish Mongers on Turnham Green Terrace

I could stroll down my local and have a couple of relaxed pints in the garden while its not too busy or I could go to that popular boozer where you don’t have to register, where everyone pushes at the bar for service, have a skinful and put my arm round an uncomfortable stranger and tell him ‘this is fuckin’ great, in’it mate’?

Oh, Keith, you are such a grumpy old man exaggerating like that. Really, exaggerating, are you sure?

Anyway, I have enjoyed a couple of trips to local boozers and next week I will be interviewing Dave Finan, the landlord of The Raven about the practicalities of re-opening, whether the hospitality industry will ever be the same again plus asking him for a couple of appropriate musical recommendations. Anyway, after my much appreciated pint I came back home and put my feet up to watch another of the Royal Shakespeare Company’s streamed performances that have helped keep me sane during the lock down. Maybe I was dozing off but I could have sworn that the Prince of Denmark was struggling with the same problems we are having today…………

To socialise, or not to socialise, that is the question:
Whether ’tis nobler in the mind to suffer
Sitting at home in a grumpy mood,
Or to walk out against the risk of Covid,
And by distancing enjoy: a pie, or a pint;
No more; and by a sneeze, to say we spread
The virus, to a thousand extra people
That Flesh is heir to? ‘Tis possible
If no one gives a toss. I could stay in,
To sleep, perchance to watch TV; but there’s the pub,
and after six full pints, what dreams may come,
When I sleep off this hangover?
But give us pause. Was there respect
For proper social distance?
What about that prat in the bog, that breath’d on me
The Oppressor’s spit, the pissed man’s Contumely.
Then, down the shops, the Law’s delay,
The insolence of drivers and he who spurns
That patient merit of the new parking measures,
When he himself might his consideration make
For other shoppers? Who moves the bollards
Just to park their four by four,
Because they can’t be arsed to think of other people.
And Inconsistent quarantine, from whose bourn
No traveller returns, puzzles the will,
And makes us rather do staycations,
Than fly through airports we know not of.
But, thoughtlessness makes dickheads of us all,
And thus the native hue of inhibition
Is sicklied o’er, and after several pints
And inconsiderate behaviour in a public place,
With this regard the Covid’s second wave doth come
And waste the name of Lock Down. Soft you now,

Fair isolation? Nymph, in thy Orisons
Be all my sins remember’d.

At this point I normally come up with a Vinyl with a link to the topic of the Blog or with some local connection. 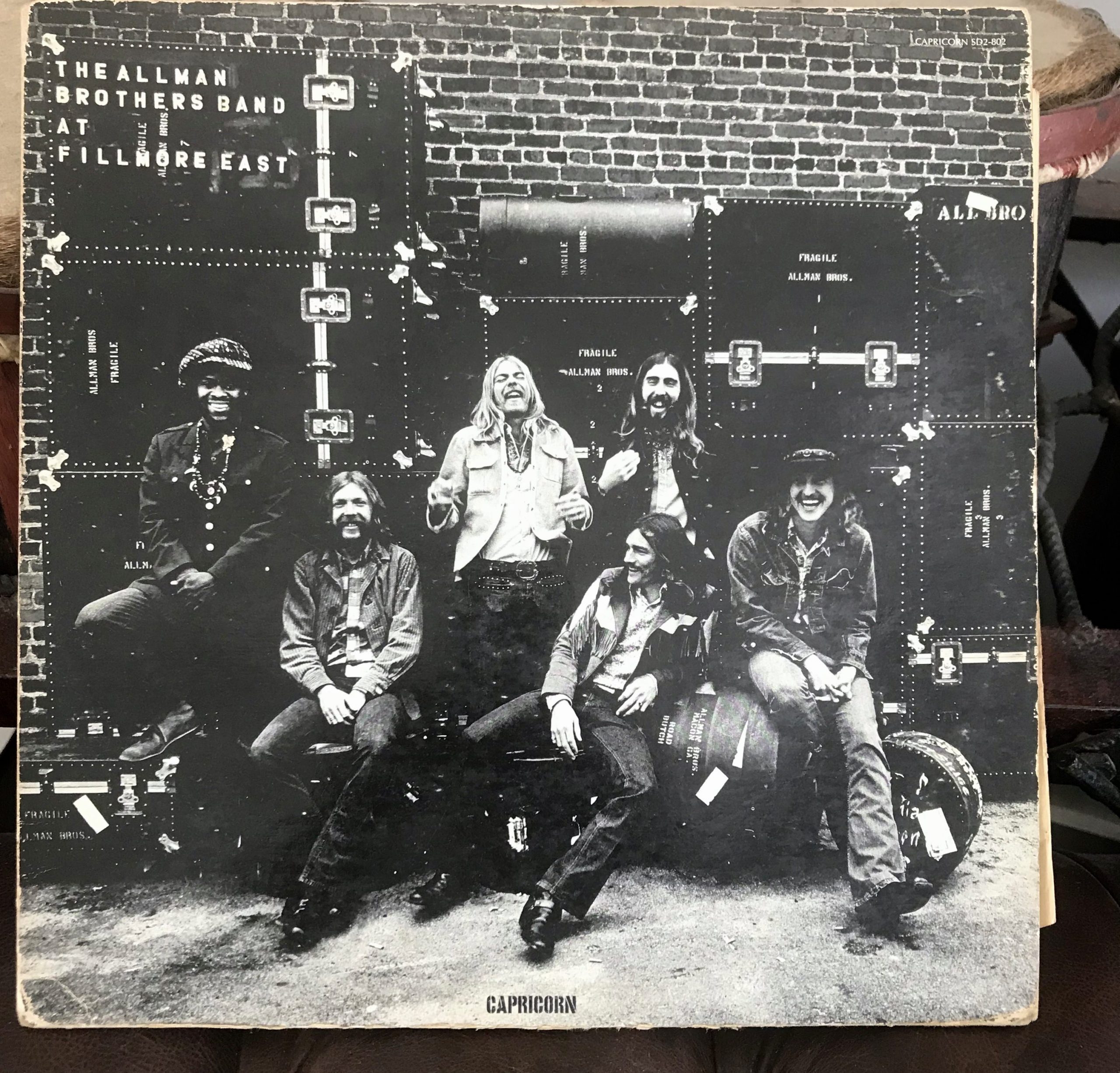 Cover story – when photographer Jim Marshall got the band up early for the shoot they were unimpressed and very grumpy. Just then Duane Allman’s dealer turned up with his stash. The band are laughing because Duane is hiding it from the camera in his lap. 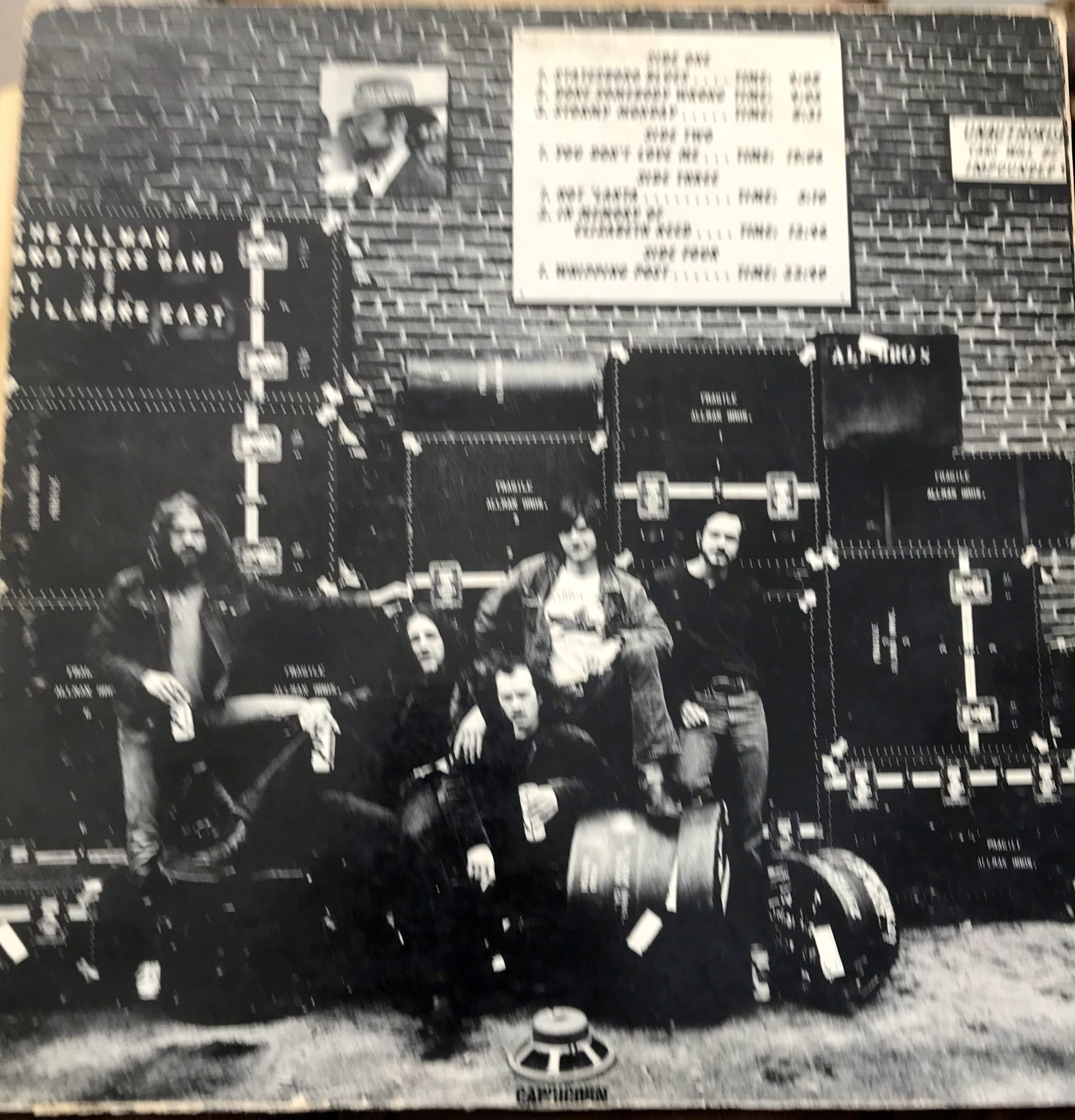 However, the crew were not so happy so Marshall had to buy them several six packs of Pabst Blue Ribbon Beer which they can be seen drinking for breakfast. Roadies !

I have been waiting for an opportunity to post “The Allman Brothers Band at Fillmore East” but it has been tough to find a link. Even though they have always been regarded as on of the great live bands and this as one of the great live albums, they hardly ever toured outside of the US so they clearly didn’t play anywhere near here. The closest would have been the Knebworth rock festival in 1974 that included The Doobie Brothers, Van Morrison and the Alex Harvey Band. I could stretch it and say that as today’s blog was one of my ‘angry’ ones this album does contain one of the great tracks to be angry to. “Whipping Post” is one of those songs for when you are in a bad mood, especially if you have just been jilted by a girl friend or sacked from a job. Cranking up the volume, strapping on your air guitar and stomping round your room while singing ‘sometimes I feel like I have been tied to the whipping post’ at the top of your voice is still a massive stress reliever.

Yet, weirdly there actually is a link, albeit a fine one: a ghost. (**) In 1972 I spent a year in red neck Wilson, North Carolina. I actually bought this Vinyl out there. It has Capricorn Records as the Label whereas in the UK it was distributed by Atlantic. My sanity in that southern bible bashing place of pick up trucks with shot gun racks was a bunch of long-haired musicians I hung out with who had a band called ‘Mass Temper’. They played mostly covers of Deep Purple and Led Zeppelin and their lead guitarist Jimmy was a massive fan of The Allman Brothers after they supported them on a couple of local gigs. He used to swear that after Dicky Betts died in a motorcycle accident on November 11th 1971, if he played any of Bett’s guitar licks his ghost would sit in the rocking chair in Jimmy’s room. He said the chair would start gently rocking to the sound of the guitar. Amazingly, after all these years I actually found one track of ‘Mass Temper’ playing a rather unoriginal song called ‘Gravedigger’ but it does gives some sense of how good a guitarist Jimmy was.  https://www.youtube.com/watch?v=R3x8jjQ1Ck8

This is said to be 1968 but I think it is a couple of years later than that.  They changed their name to plain ‘Temper’ and got a recording contract.  I went with them to Capitol Records in Atlanta and they recorded a couple of tracks. It never got released, I came back to UK and they eventually broke up but we do have some fun stories that might come out another time.As for the ghost, who knows? At least the story gives me an excuse to play this amazing track as a ghostly link to the past.  https://www.youtube.com/watch?v=FUvxRjYqjEQ&list=RDgB4pfNETfes&index=2  This is at Fillmore East but not when they recorded the album.  This version is just over 11 minutes and their normal set as on the album is over 22 minutes long.  Even playing air guitar that long makes your arm ache.