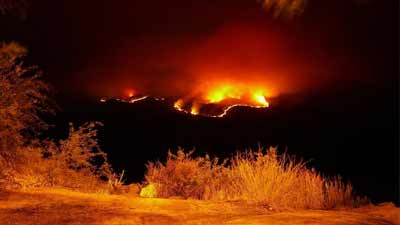 This was the epigraph I used at the start of last week’s Blog. Some of you correctly identified it as the start of Jimi Hendrix’ ‘Voodoo Chile’. Here’s another one…….

This, of course, is the start of his ‘Voodoo Chile (Slight Return)’, which given its apocalyptic message it is appropriate that it was the last song Jimi Hendrix performed live, at a festival at least *, at a concert in Germany on the 6th of September 1970, 12 days before his death.

I chose it because it fitted my angry mood and the content of the Blog about the Extinction Crisis with particular reference and the photos of the US west coast in flames. However, isn’t it strange that Jimi came to mind as I started writing that Blog on the 19th, one day after the fiftieth anniversary of his death?

I would have been about 13 when Dad brought home our first little record player. He also brought us 4 EP’s – mine was Beatle songs, a selection from the musical ‘Oklahoma’ for sister Anne, classical piano for our Mum and Opera Aria’s for himself. However, my first purchased single was ‘Purple Haze’, released in March 1967 and soon to be followed by ‘Burning of the Midnight Lamp’ in August. Looking at the photos of the singles from my old box, it is possible to see Anne’s initials from where she would have taken it to a party and my school nickname ‘Tiny’ in a loop with the year – what would be called a ‘moniker’ today or even a ‘Tag’. I used to write it all over the place and even carve it on school-desks during my rebellious teenage years. 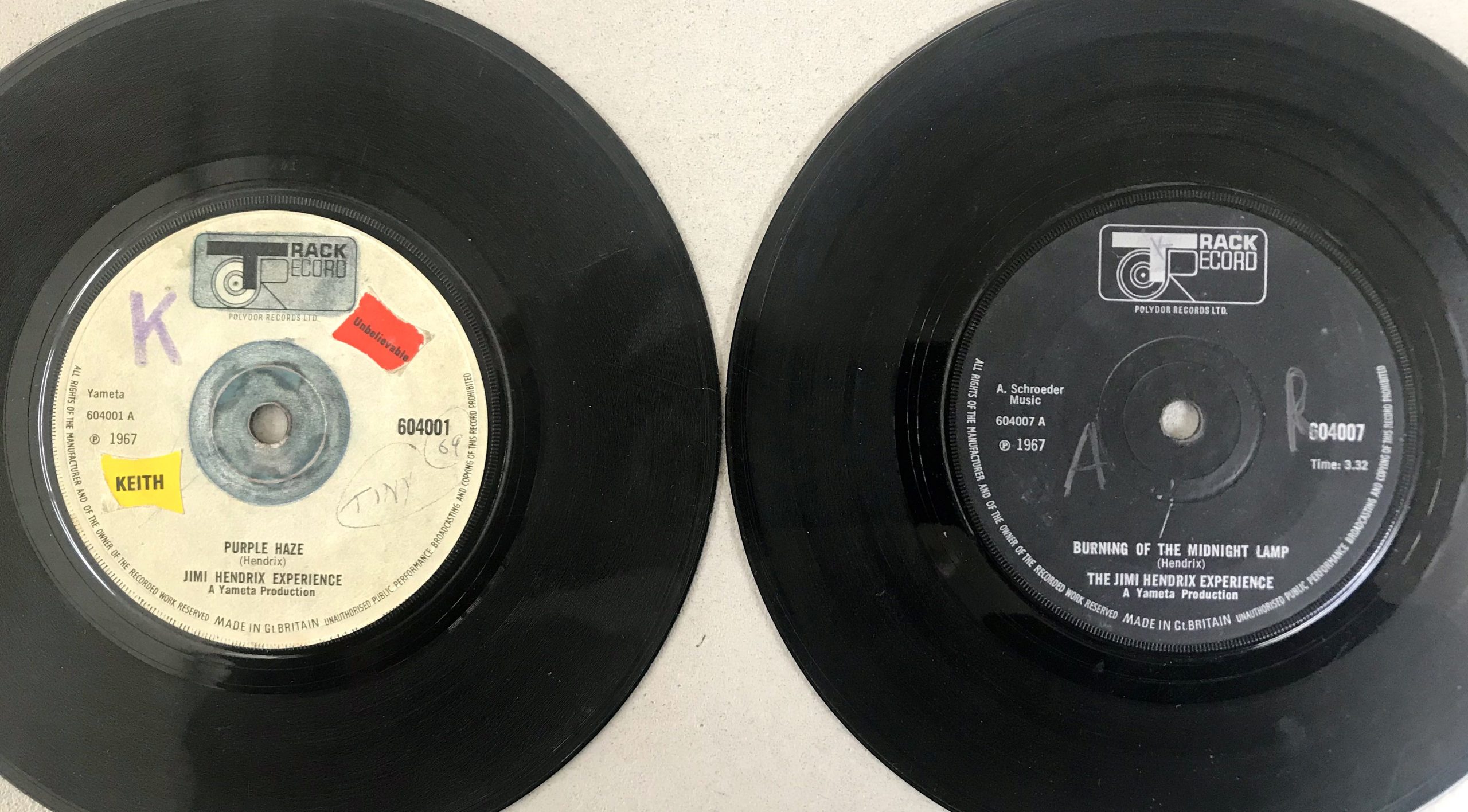 Cherished but well used – the initials show how they were carried along to parties. 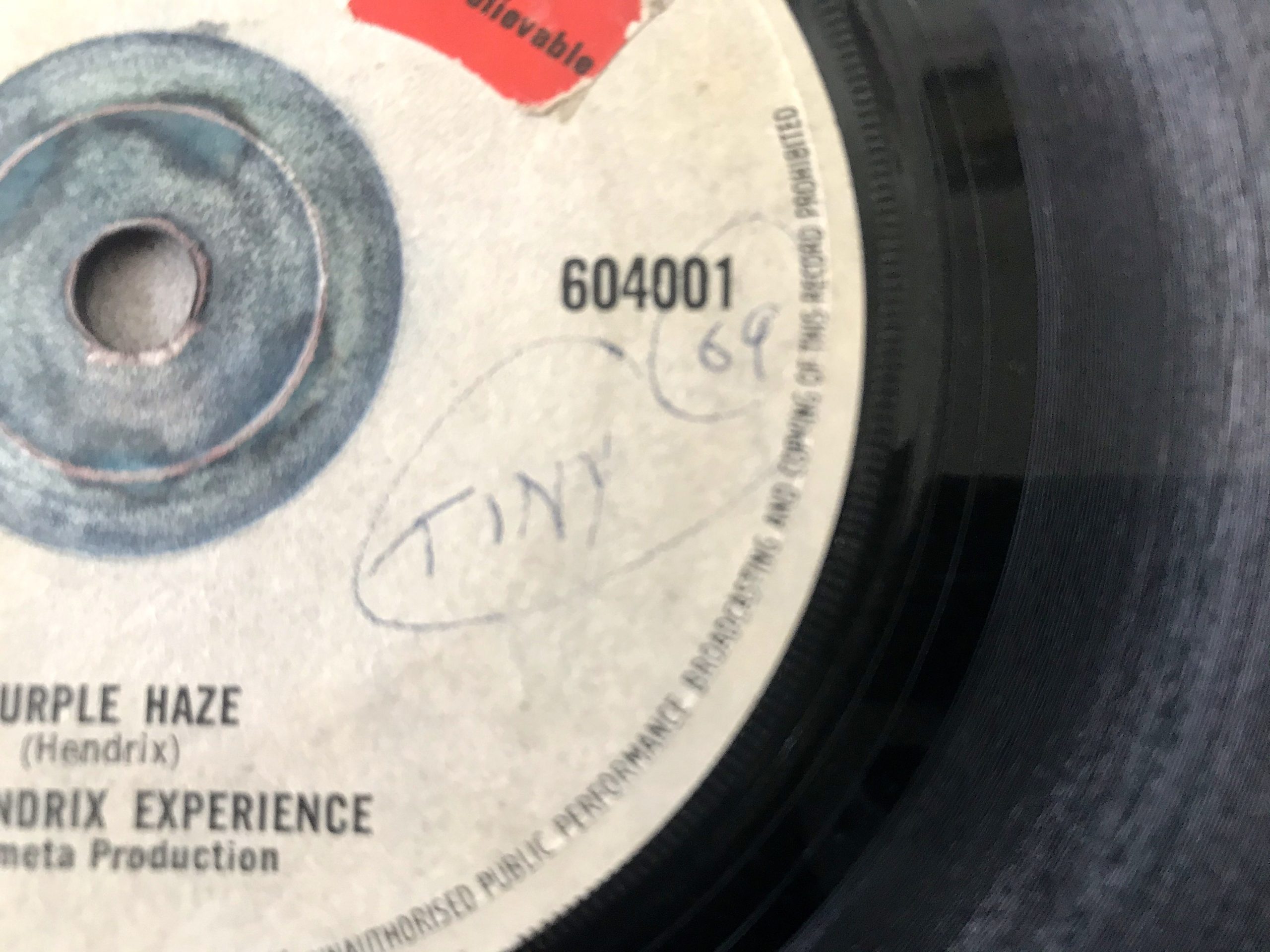 To old school mates and the Old Isleworthians Rugby Club I am still ‘Tiny’.

The album ‘Are You Experienced’ was released in the UK in May 1967. I first heard it in a listening booth in a record shop on Hounslow High St. My recollection was that there were three places to buy records in Hounslow then. It was very easy to ‘nick’ them from Woolworths because they actually left the record in the cover on the racks but I didn’t work that out until I was a bit older. There was a HMV store (probably still called ‘His Master Voice’ then) and another that I think may have been called ‘Melody Stores’ or something on those lines. They kept the actual records behind the counter and you took the empty cover to the sales person who would find the record to put in the sleeve when you bought it. They would also play it so you could listen to it in a separate acoustic booth, which, as I say, was how I first head ‘Foxy Lady’, my favourite track off the album. 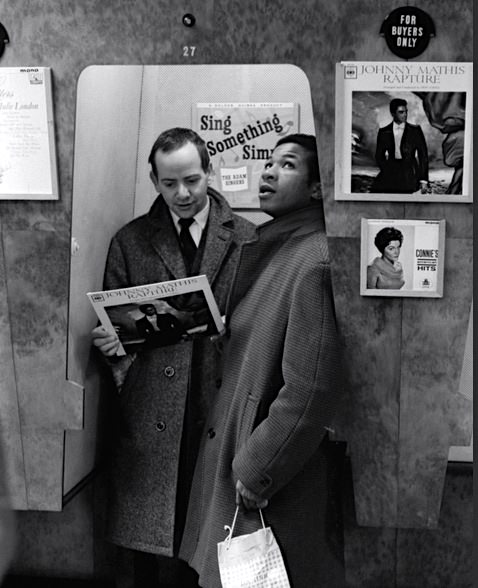 Some shops had full walk in cubicles. Others, like this one, just small booths that sometimes four or five of us would try to squeeze into to hear the latest albums that were seldom played on the limited radio available.

On the other hand I first heard ‘Axis: Bold As Love’ (December 1967) when Radio Luxembourg (or one of the pirate stations) announced they would play the whole album straight through on the evening it was released. In our ‘front room’ there was a big old wireless and I lay on the floor in the dark and listened to it. I was 14. As soon as I saved enough pocket money I bought it and I joined the Jimi Hendrix fan club. How I wish I still had all that memorabilia they gave back then as I guess it would be worth a small fortune now. I had two pen friends from the fan club – in Neasden and Stockport, not very exotic. I have long since lost the original albums and had to buy duplicates. 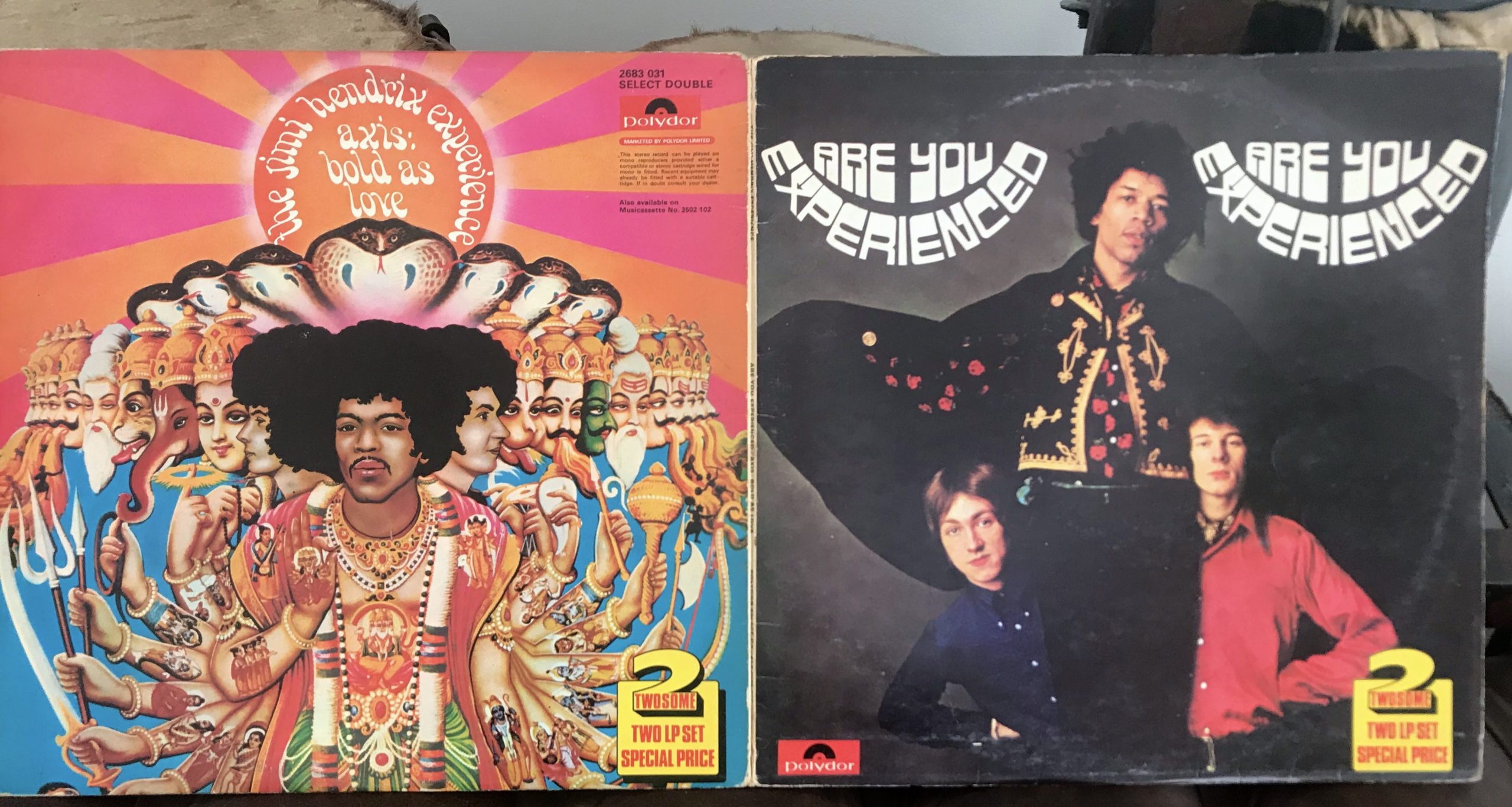 I don’t have my old copy of the third album ‘Electric Ladyland’ (October 1968) but we all remember the cover, right? It is regarded as Hendrix’ masterpiece and it is hard to believe it was his last studio album. Should it be regarded as one of the most influential albums ever? It certainly had some tracks that became, and I use this word sparingly, iconic: the two Voodoo versions, ‘Burning of the Midnight Lamp’, ‘Cross Town Traffic’ and even his rendition of Dylan’s ’All Along the Watchtower’. I would argue that it should and intend to demonstrate that with three clips.

The first is Jimi himself playing ‘Voodoo Chile (Slight Return)’. Interestingly, in the UK it was ‘Chile’ but on the US cover it was spelled ‘Child’. It is from a gig in Maui in July 1970 where he had gone to make a new album and an ill-fated film known as the ‘Rainbow Bridge’ project. Some sources suggest that a final compilation of clips of that visit is about to be released as a documentary in November this year. Of course, tragically it was only some two months before his untimely death. The video is named as ‘Jimi Hendrix Experience’ but I am not sure this wouldn’t count as the ‘Band of Gypsies’ as Noel Redding (and his slightly wooden bass playing) had been replaced by the more driving riffs of Billy Cox though drumming duties were back in the safe hands of (the underrated) Mitch Mitchell.https://www.youtube.com/watch?v=qFfnlYbFEiE

Now, one evening in the late 90’s I was taken back to his apartment by a Lagos based mate, Rod Nuttal, because after a long discussion in ‘Havana Bar’ (Ribadu St off Awolowo Rd and unfortunately no more) he wanted to play me Stevie Ray Vaughan’s version of Voodoo Chile. I didn’t really know SRF’s guitar at that stage but became a massive fan. Now, the crux of the matter lies in a comparison of the tightness and precision of SRV versus Jimi’s looser style when playing live. On this basis Rod would have it that his guy was ‘the better guitarist’ whereas I would still insist as the composer of the song and the creator of the riffs and licks that make it so great, Jimi is still the better artist. SRV’s recorded version was on his 1984 album ‘Couldn’t Stand The Weather’. You can also compare their renditions of ‘Little Wing’ as well. Anyway, in a way it’s a ridiculous argument, as they both remain absolutely at the top of the panoply of greatest ever blues-rock guitarists and were both taken from us too early. Though SRV died in a plane crash in August 1990 his struggle with booze and drugs was also well documented. As we just past thirty years since his death (27/8/90) and fifty since Jimi’s (18/9/70) we should be grateful for both of them.  https://www.youtube.com/watch?v=rb53-sDII0o

My third clip is wildly different but reflects how widely Hendrix’ influence is felt. Angélique (Kpasseloko Hinto Hounsinou Kandjo Manta Zogbin) Kidjo was born in Ouidah in Benin Republic in 1960 of Fon/Yoruba parentage but is predominantly based in the US.   I have been a fan for years but only managed to see her live last year when she appeared at the Albert Hall (with thanks to Andy for the ticket) and the Evening Standard had this to say….. “You don’t often see the Albert Hall on its feet jumping like this and rarely in the BBC Proms. From the arena and stalls around the stage to the gallery at the top everyone was dancing. And the cause of all this was the petite but power-packed Angélique Kidjo twirling, pacing and hollering on stage.” I was pleased to influence the makers of the Guinness sponsored film “Critical Assignment” (Michael Power. The Movie) to include more African music and a track from Kidjo’s 1995 album ‘Fifa’ (The Sound of the Drums) became the song over the credits. Kidjo recorded ‘Voodoo Child” on her 1998 ‘Oremi’. https://www.youtube.com/watch?v=FIZ38L-ALK8

Voodoo for the Planet

The song has nothing to with Voodoo (‘Vodun’ is the Fon/Ewe word for ‘Spirit’) as a religion though ironically it’s birthplace is Ouidah, where Kidjo was born. It has travelled right across the world, carried from its source by countless enslaved persons. Throughout South America and the Caribbean those communities kept it alive – even in parts of the South Eastern US such as New Orleans – where is still exists on its own or hidden inside the localised practices of Catholicism.

Various western attempts to define Voodoo tend to miss the point: that all aspects of the natural world are seen as having spiritual identity immune to physical death. Instead of a focus on exotic dance rituals it seems to me to be the perfect belief for those of us that mourn the loss of the planet that we live on. I chose the Voodoo Chile epigram as an illustration of the apocalyptic fires that have caused and continue to cause massive damage to the environment, not just in California but right across the world. From wild fires in the US, Australia and Siberia to deliberate burning down of forests in Indonesia, Brazil and parts of Africa the world is aflame. Voodoo or Animism (actually, most African religions) include belief, not just in a person’s spirit surviving the death of the body but in the continuity of the spirits of the forests, seas and mountains and the flora and fauna that live in or on them. Ancestors’ ‘spirits’ are called upon for inspiration, protection or other influences over the material world. It seems to me these (what Christians called) primitive faiths seem to have done a great deal less harm to the planet than some of the wold’s major religions I could think of !  We need some intervention by the spirits of our ancestors right now.

* Many sites claim this was his last gig but he did actually play one more small gig at the famous Ronnie Scott’s on September 16th – just two days before he passed away – almost exactly 50 years ago as I write.