From Chiswick Re-Confined to Kano Re-Imagined

From Chiswick Re-Confined to Kano Re-Imagined 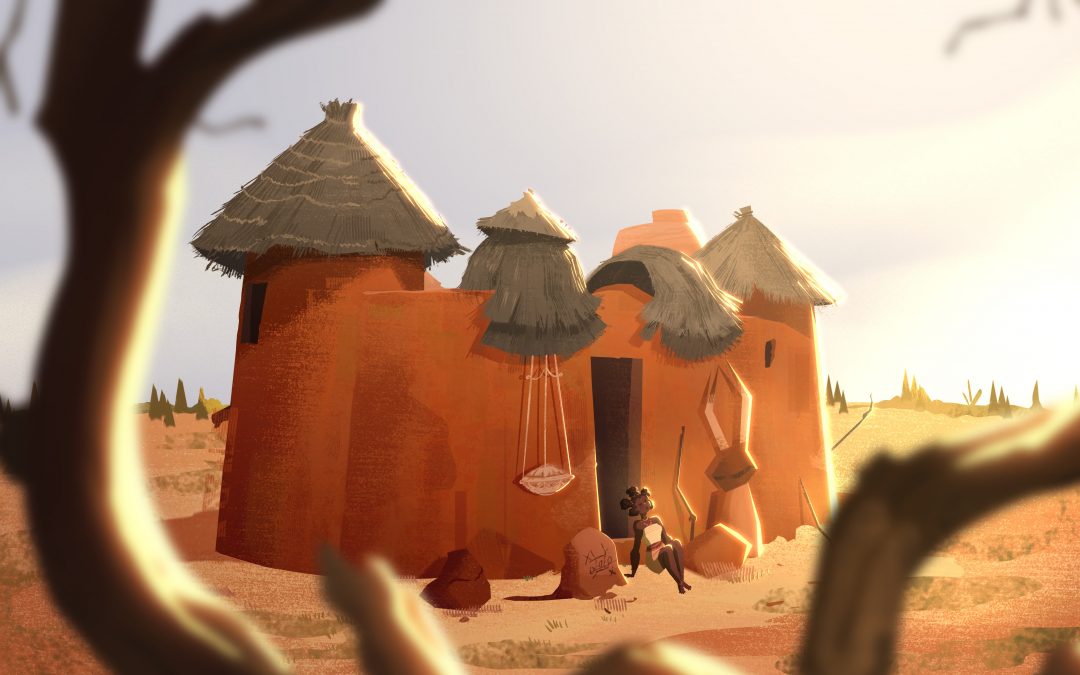 “Culture does not make people. People make culture. If it is true that the full humanity of women is not our culture, then we can and must make it our culture.”

More of Proud of Our Local Girls Made Good

Last week’s blog was on the theme of #proudofourkids and ‘local girl made good’ and this week’s is the same ……. But with a difference.

After all, what exactly is local in this modern world of connectability? At the moment I have friends just streets away from me who I only speak to on Zoom and less regularly than other friends scattered across the continents and separated by oceans. Social media and instant electronic communications have changed the meaning of ‘local’.

So, Umaimah Damakka is a visual development artist and animation designer from Kano in Northern Nigeria and falls under my definitions of #proudofourkids as well as ‘local girl made good’ and I am going to explain why.

From an Ancient Walled City

Kano is an ancient walled city. There is evidence of settlement sonce the 7th century and as early as the 12th century it was a powerful city state with trade relations with North Africa, the Nile valley and with what is today Iraq. It has only been in a country arbitrarily called Nigeria since the British decided to formalise the creeping colonialisation that stated with trading in the resource rich South (palm oil, rubber, ivory and not forgetting enslaved people who were the first ‘commodity’ that enticed the British to West Africa) and culminated in a number of military massacres such as the ‘Punitive’ desecration of Benin and the ‘Niger-Soudan Expedition’ that mowed down of thousands of sword bearing cavalry by the ‘weapon of mass destruction’ of its day, the Maxim Gun. Casual followers of western news sources might associate the modern city, with a current population of around 5 million, only with the ethnic and religious disturbances that are reported such as Boko Haram, school kidnapping and the recent toppling of the Emir in a palace coup for daring to espouse the most moderate criticism of the Nigerian Muslim elite. Yet despite what you may read in the papers or see on CNN the vast majority of people live their lives concentrating on the same everyday basics as any Chiswick parent does: making an income to provide for the family, striving for some work life balance and worrying about their children’s future.

Having first visited Kano back in the early ‘80’s, during my time in Nigeria I was a frequent visitor to the city’s huge markets that reflect those millennia old trading routes. At first I was selling soap and then, with Guinness. Although clearly the consumption of Arthur’s famous stout was low in a predominately Muslim society, the non-alcohol Malta was very popular. I can’t even try to describe the physical assault on the senses that the large African markets engender, particularly the food markets. The vibrant colours, the cacophony of stall holders calling out to customers or hooting with their neighbours, the smell of fresh spices being ground, even, not for the squeamish, the butchery section. For me the overwhelming memory, amongst the heat, flies and dodging delivery boys piled high with boxes, is sitting with our customers arguing about the latest price increase or what discounts or gifts our competitors are giving them but always with laughter and hospitality.

In my last job running a company with powdered milk, tea, coffee and food flavourings, that region was an important market so I was an even frequent visitor with the honour of calling upon the Emir to pay my respects and finally to be ‘turbaned’ as a ‘Sarkin’ (chief) in neighbouring Daura. What an incredible experience that was! As I moved towards retirement in about 2014 I was asked by a Kano based dairy business to sit on their board to advise on the commercialisation of their brands as they developed out of their family run farm. Their milk, ice cream, yoghourts and a wonderful traditional product called Fura da Nono * are produced from the small herd they maintain as well as collection from local Fulani cooperatives. When I was first asked to join them by a friend of mine who was investing, Mezuo Nwuneli, I enquired about the Damakka family. When I was told that they voluntarily paid ten per cent more for milk if the family had a girl child at school I knew they had the values of people that I could work with. Since then Muhammadu (usually just known as ‘M D’) and his wives Zubaida and Rakiya have become both colleagues and friends. During my trips they would invite me into their home or to the family run restaurant where I would invariably meet their children. When my son George was in Nigeria he was invited up to spend time with them too. Family is everything.

Umaimah was already away at school when I got to know the Damakkas. I was impressed by the pride shown by M D in a daughter that was already taking a path for herself so far out of the norm for their society. Inspired by watching cartoons from Disney, Cartoon Network and Nickelodeon and reading the Archie Comics supplied to her mum’s store she fell in love with art. In her words; “It was inspiring to know that people were responsible for creating a whole fictional world that viewers could relate to and fall in love with, I wanted to be part of a team like that.” At the same time, loving cartoons came with the awareness that many of the animated shows she watched did not reflect her kind of society and early on she saw a career as an artist who could reflect more of a life that was relevant to her and her background. 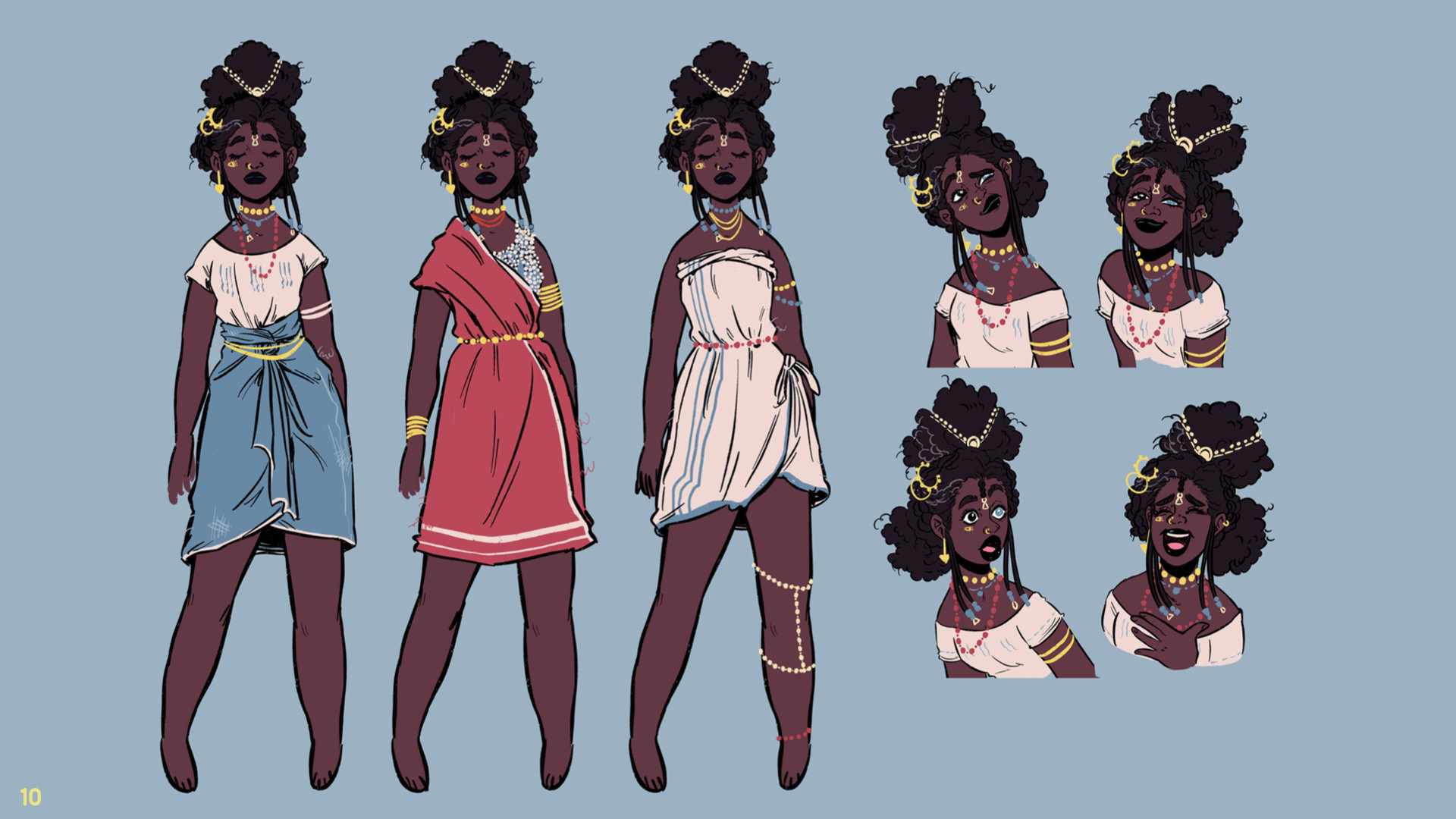 All the images are Umainah’s work and demonstrate her desire desire to reflect the lives of her own culture.

After school her parents were willing and able to support her career choice (when typically Nigerian parents would be discouraging their children to seek a life in the arts – pushing them toward law or medicine) and Umaimah was able to travel to Georgia USA where she studied and then graduated with a BA in Animation from Savannah College of Arts and Design. While there her work was noticed by award-winning director and actor Jordan Peele, and it was featured in a Universal Studio Gallery show. In her final year, she co-directed and was the art director of her thesis film Harvest, which is currently achieving recognition at a number of film festivals.   Since then, she has worked with studios like Cartoon Network, Sesame Studios, and Disney TV Animation and free-lanced for published authors under Harper Collins. She is still in the United States, working as a Colour Designer with Disney on a reboot for the award-winning show The Proud Family. This means’ of course, that she has had to use Zoom to keep in touch with her family – spending her Covid time reading and cooking some of the Hausa food she misses. 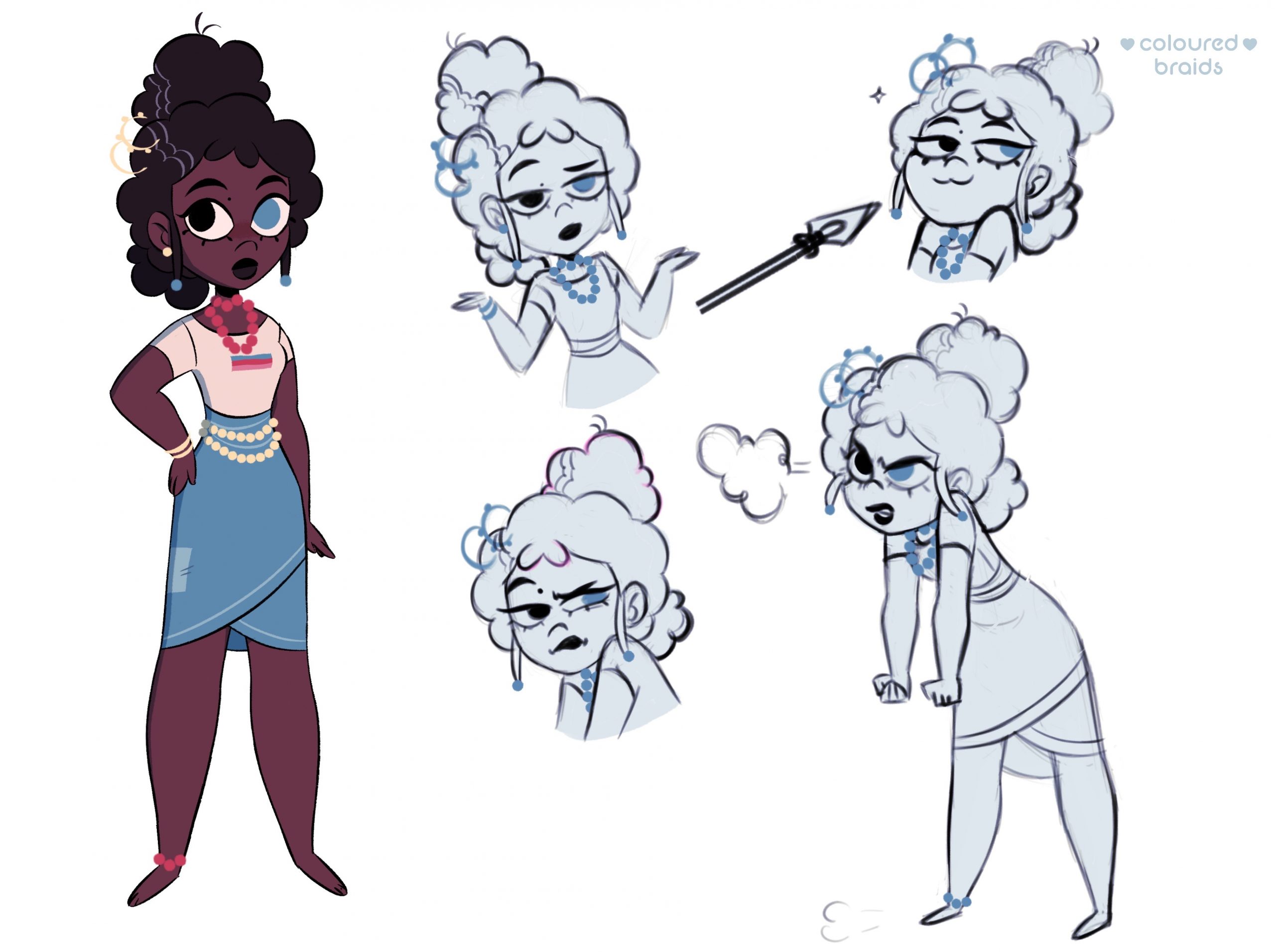 In Her Own Words

When her father proudly mentioned her work on one of our L & Z Farm Zoom meetings and sent me some pictures I was inspired to share her story. I emailed Umaimah to ask her directly how she felt challenging what is seen as ‘proper’ behaviour as a young woman in her society. I will let her words speak themselves.

“Being Hausa and having some differing principles values from those around you is not easy. It feels like you become the one person in your community that kind of goes out of what the norm is, and that can feel isolating; It’s even harder when you’re a female child since society believes girls have no right to question the rules. However, I recognize that I am in a situation where this was easier for me because of my family; we are very loving and supportive towards each other despite our differences. This made it easier for me to study art in the US and pursue animation as a career.” 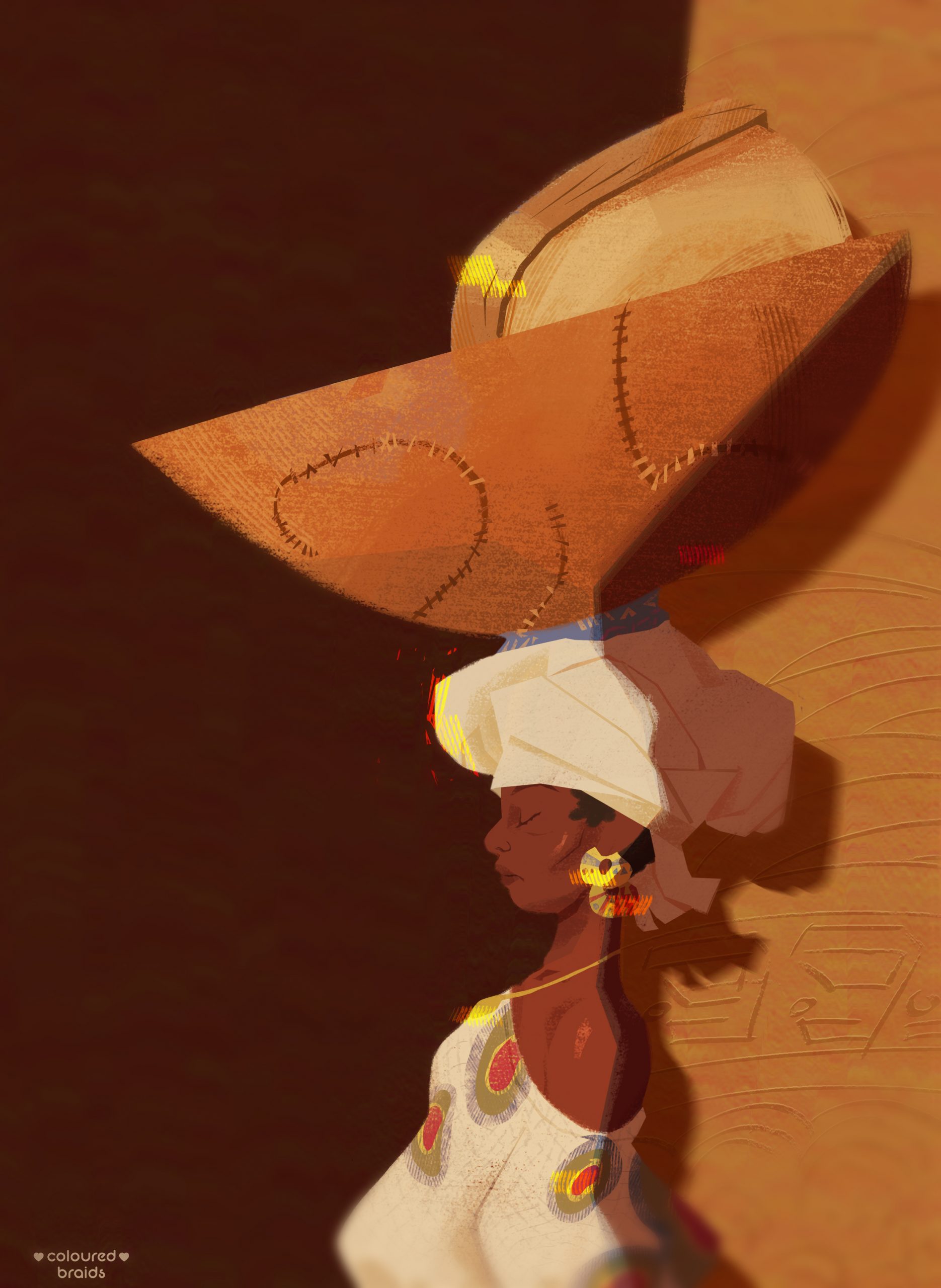 “My upbringing reflects my art a lot, especially how my art looks right now. As an artist, your style and inspirations change. My parents were particular about self-love, including loving the culture you were brought up in and not throwing it away. It made sense to me to put together my love for animation and my culture. A lot of my artworks are Fulani girls or local Fulani environments. I can’t remember seeing those subjects drawn in the style we see in animated films or shows…… I know it’s not the same for many girls in Kano. I can only hope that one day I’ll be able to give back to those girls and watch them grow out of the limits put on them.”

Here’s wishing her the best of luck with her aspirations as this blog’s ‘local girl made good’. #proudofourkids

Umaimah is making inroads into her career and is keen to expand her contacts. If you would like to see more of her work or reach out to her, her website is https://www.udamakka.com/about–resumeacute.html

I struggled to choose a piece of music to accompany today’s blog until I decided on the violin solo from Nicholai Rimsky-Korsakov’s ballet “Scheherazade”. Of course, the eponymous princess is the protagonist in the Persian “One thousand and One Nights”. I am not saying that Umaimah is Scheherazade but she is in her own way a story teller. Also, I have been fascinated by some of the history and pre-Islamic stories of what is now Northern Nigeria ever since at my turbanning the court historian of the Emir of Daura gave me an oral history lesson. I don’t have space to indulge myself here but several of the original peoples from that area were matrilineal societies and they had a history of strong women. Just maybe there is an echo of that in Umaimah’s determination. Anyway, here it is – and I thought this version with the cartoons was even more appropriate. Enjoy.

Finally, I leave you with an image some may find disturbing ……….. 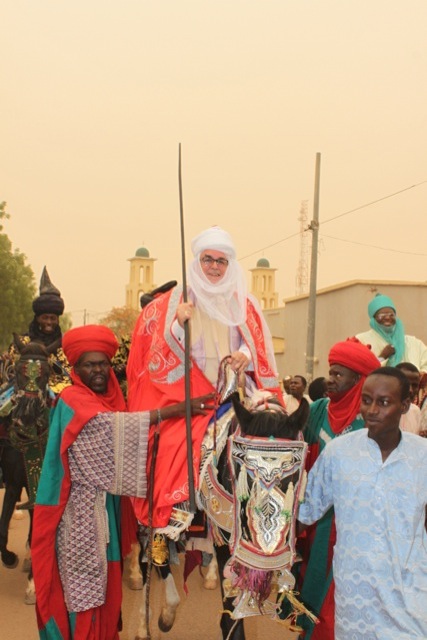 Turbaned as ‘Ganuwan Daura’ – a Sarkin (Chief) in another ancient walled city about an hours drive from Kano.

*Fura Da Nono (from the Fulani word for milk and millet) is a mix of fermented milk and ground millet, often flavoured with ginger and cloves. It is traditionally sold from gourds or calabashes carried by local Fulani women around the villages and ladled into household bowls with a wooden spoon. L & Z Farms’ version is obviously somewhat more sanitary and sold in sealed plastic yoghourt style containers and they sell all they can produce.

An earlier version of the Blog has appeared in the local news and views website https://chiswickcalendar.co.uk/