Grateful & mellow with a touch of funk.

Grateful & mellow with a touch of funk. 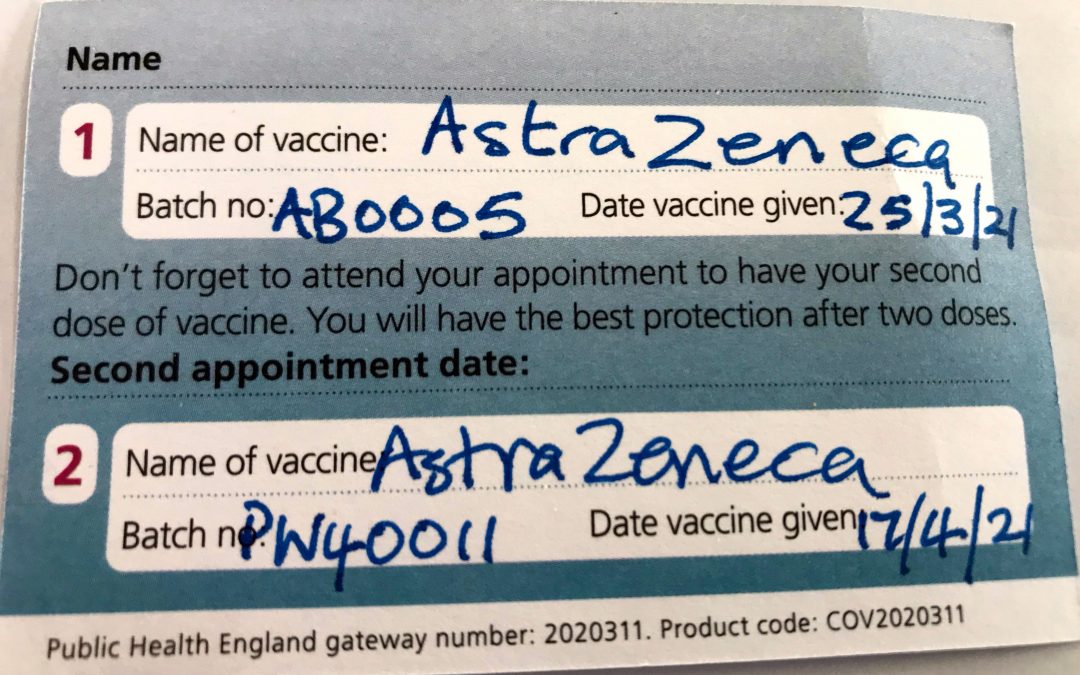 “A Joyful spirit is evidence of a grateful heart.”

I am going to start this week’s Blog with a simple thank you to the NHS staffers and volunteers who enabled my second AstraZeneca vaccine this week.

My jabs have been administered through my GP’s who are based in the Chiswick Health Centre in nearby Fishers Lane, soon to be demolished to enable a more modern, fit-for-purpose, facility. I have to say that the management, from phone calls to confirm dates, to well-organised queues and the jab itself, has been seamless. Both times I have been out on the street within 15 minutes of my allotted appointment time.

I did manage a brief conversation with the doctor who actually ‘gave me the needle’ about how much better the NHS & volunteer run vaccine programme had been than the out-sourced Serco and co ‘Track & Trace’ fiasco. She did tell me that in this area the testing regime had recently been handed over to the local Public Health England team but I could find no verification of this on-line. This could start me off on one but I am determined to stay chilled today.

Some of my friends and social media contacts have complained that the after effects of the second dose have been more pronounced with several feeling poorly for a day or two. However, as I write this some 48 hours after, I have not felt any symptoms that I can identify with the jab, though the glands in my neck seemed a little ‘up’ for a while. Yesterday, Sunday, I did feel a little more fatigued than usual in the evening but I suspect three pints of foaming ale and a massive Sunday lunch at my local, The Raven, may have had something to do with that.

So, this weekend I did my best to ignore all the negative aspects of current issues, both local and global and focus on affirmative emotions. I let myself float on a cloud of gratitude. I was determined to recognise and appreciate my great fortune to be living in a leafy suburb of a city where there are parks and green spaces a plenty and I have the health and resources to enjoy them.

As I came out of the health centre I cut across Chiswick Common, an open green space with a sports centre on one side, bathed in warm spring Saturday afternoon sunshine. The smiles of a population newly released from the worst of the Covid restrictions were obvious. The sounds of a group of children playing with their friends, possibly for the first time in many months mixed with the more urgent shouts: “space, space” or “down the line”, from the five-a-side football pitches. 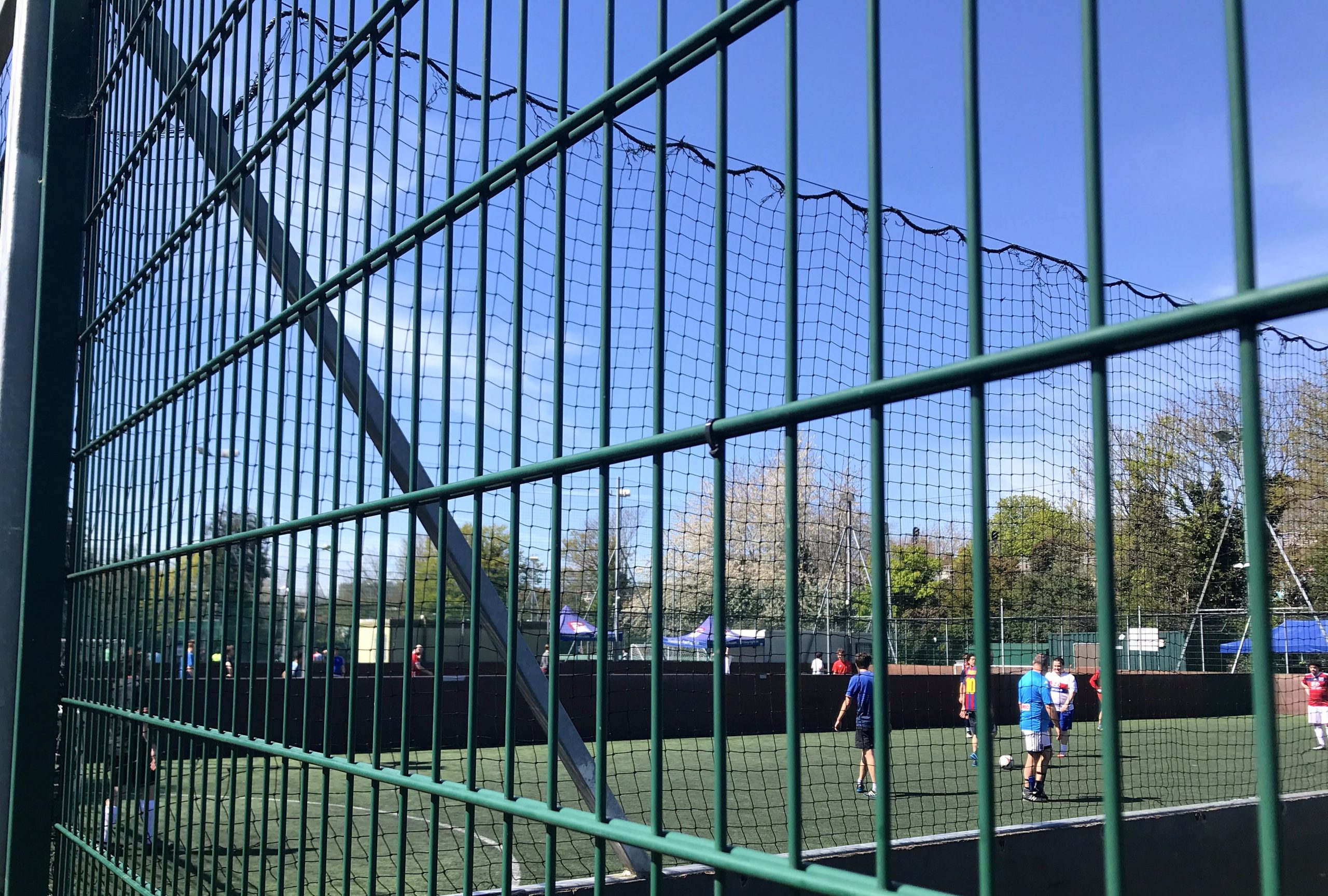 Enjoying the chance of a game of five-a-side football in the sun. 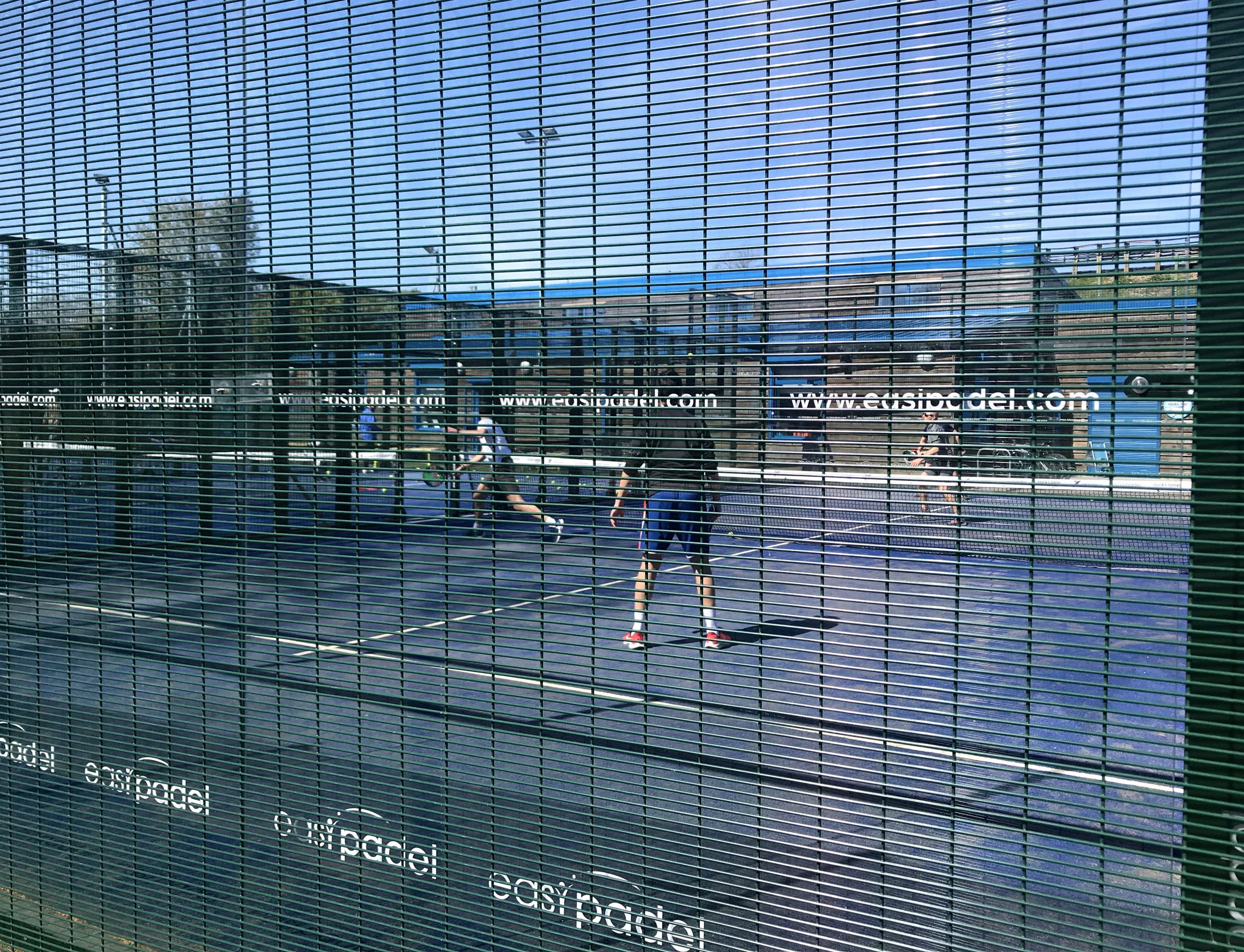 Padel Ball is a fairly recent addition to the pantheon of popular racquet games.

The Rocks Lane sports centre has courts for the recent phenomenon of ‘Padel Ball’ that were full with clearly competitive participants. I sat on a bench with my take away coffee as all the outdoor tables of local cafes were occupied and was able to have the kind of relaxed conversation with a stranger that would have been unlikely pre-Covid. Suddenly, we have a shared experience of a crisis that has lowered barriers – at least for a while. Oh, that it may continue!

The lady that I chatted with had a fluffy dog of some kind; I am not a doggy person so don’t ask me what breed, and the poor thing was clearly unsettled. She explained that this was its first experience of a busy environment after months of quiet solitary walks and it was obviously getting sensory overload. It struck me that, just as many people are struggling with a return to social activity, that pets too had got used to being with just their owners with all the attention that resulted. This poor thing had just been secluded for probably ten ‘doggy years’ and was now having to get used to noisy children, bikes and joggers all within a couple of feet of its face. Mind you, on Sunday in The Raven I noticed that Albert, the pub cat, was having no reservations and was clearly strolling around to remind everyone who was boss!

Knowing I was booked for my Sunday lunch the next day and in the knowledge that there was a chance I might have side effects that evening, my Saturday evening was a quiet one. Come the next morning I decided to take a detour to the boozer for a stroll round Ravenscourt Park and check on the Egyptian Geese and frog spawn/tadpoles I have been commenting on. One of the great joys in life is to sit in a café or in a park with a book. I find it easy to shut out the external noises and concentrate on whatever I am reading. It’s a particular favourite traveling holiday pastime. Alternatively, particularly in restaurants, peaking over the top of the pages is great cover for people watching. So, I sitting on a bench intent on reading a few pages, the opportunity to observe life unfolding was just too much to miss. 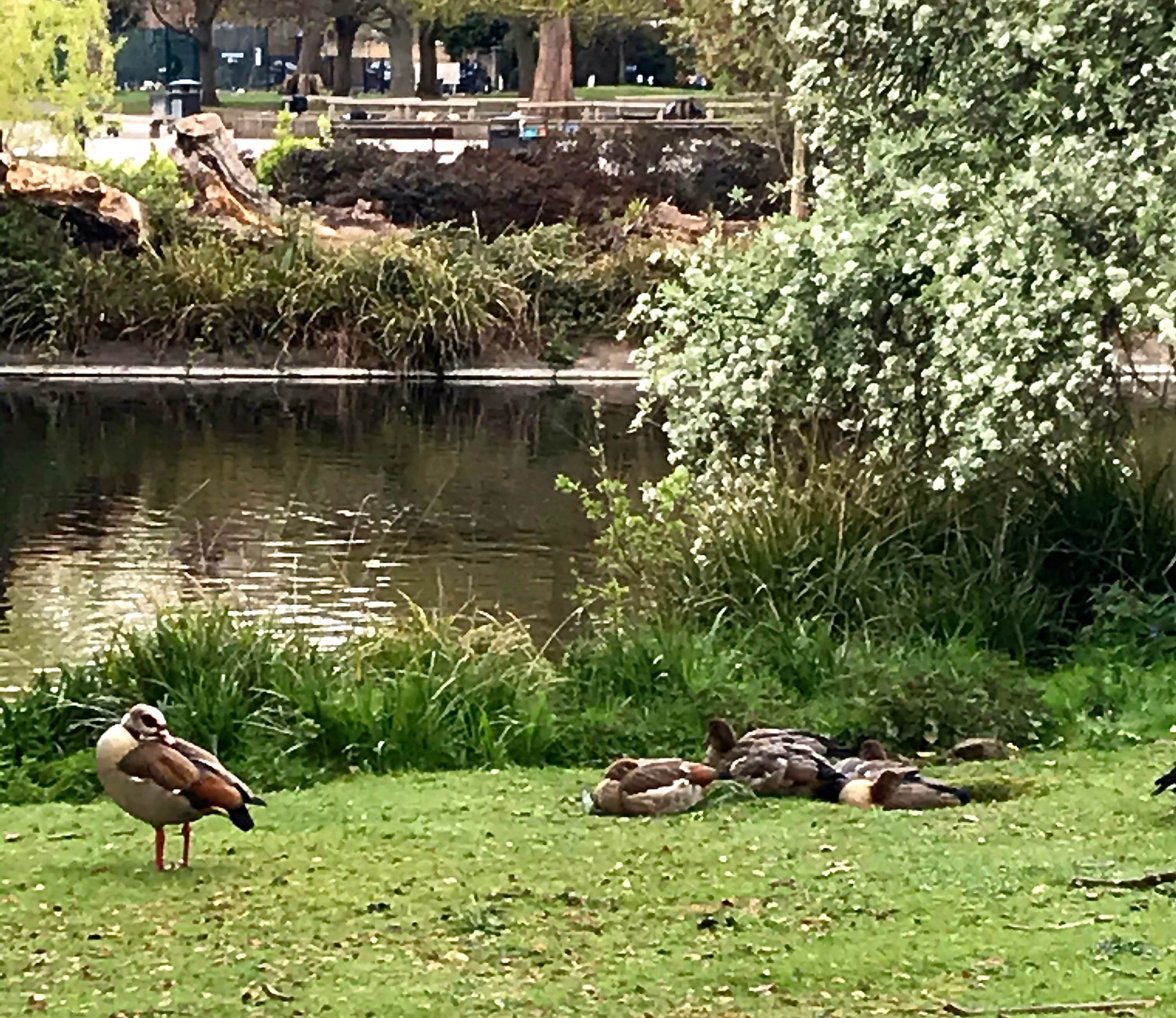 The Egyptian goslings clearly getting as big as their parents 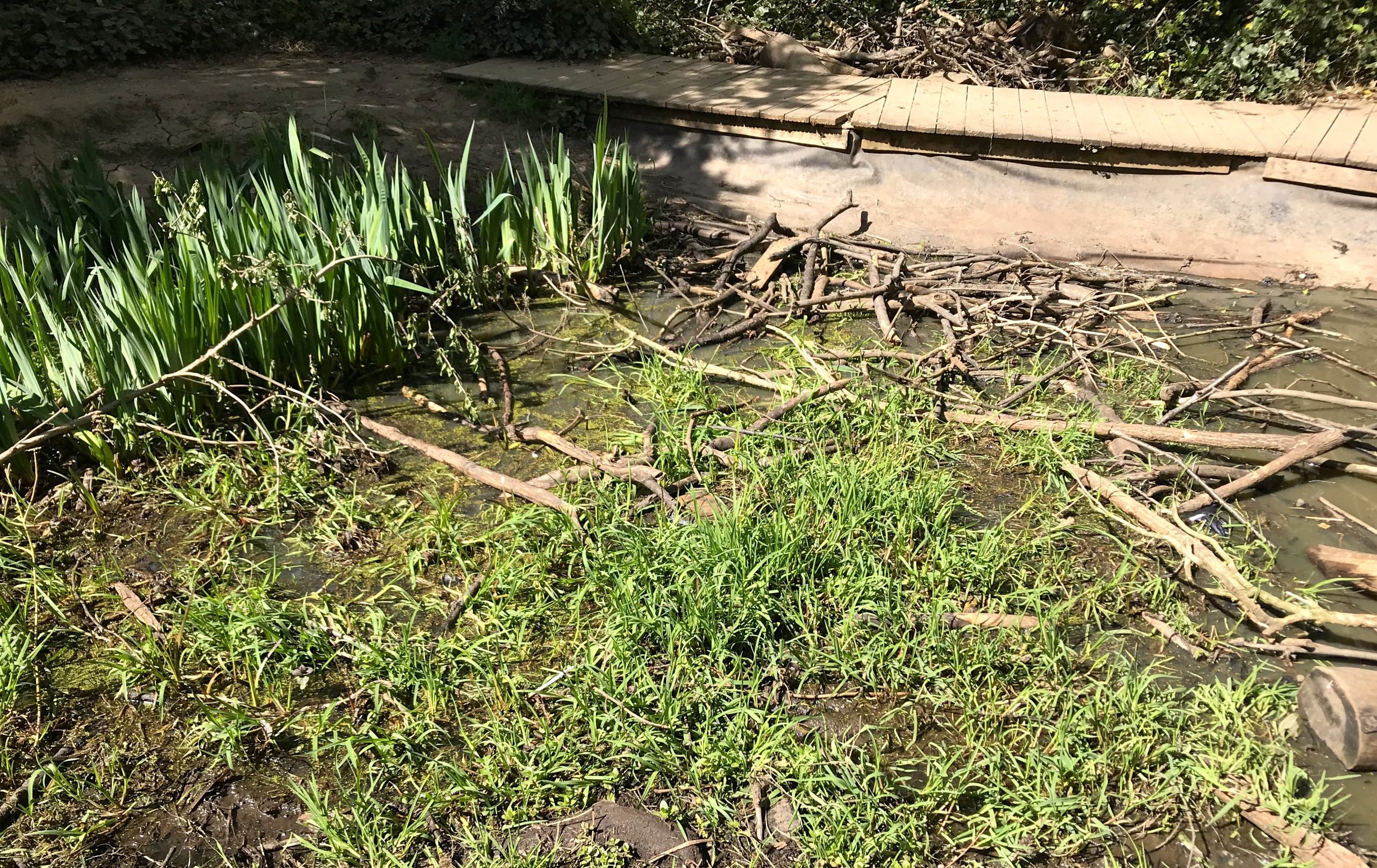 The pond is clearly getting dry with little sign of tadpoles in what is now mostly mud.

It struck me that many children would have had to forgo their birthday parties over the last year or so and clearly, there was now a chance to celebrate this or even last year’s birthday. There were several areas informally marked out with picnic paraphernalia and even bunting, with a parent organising some games for small children and others clearly catching up with the gossip. Some groups had dads clutching cans of beer and the mums their plastic cups of Pinot Grigio whereas others, possibly Muslims adhering to Ramadan, gathered talking but in abstinence. One of the joys of Ravenscourt Park over this year has been the wide diversity of people enjoying the facility in their own way. Looking across the various picnic groups I could see bikinis and shorts, saris and turbans, dreads and hijabs. Whatever the religion or ethnicity there is a shared humanity in having the kids let off steam in the fresh air instead of the living room. 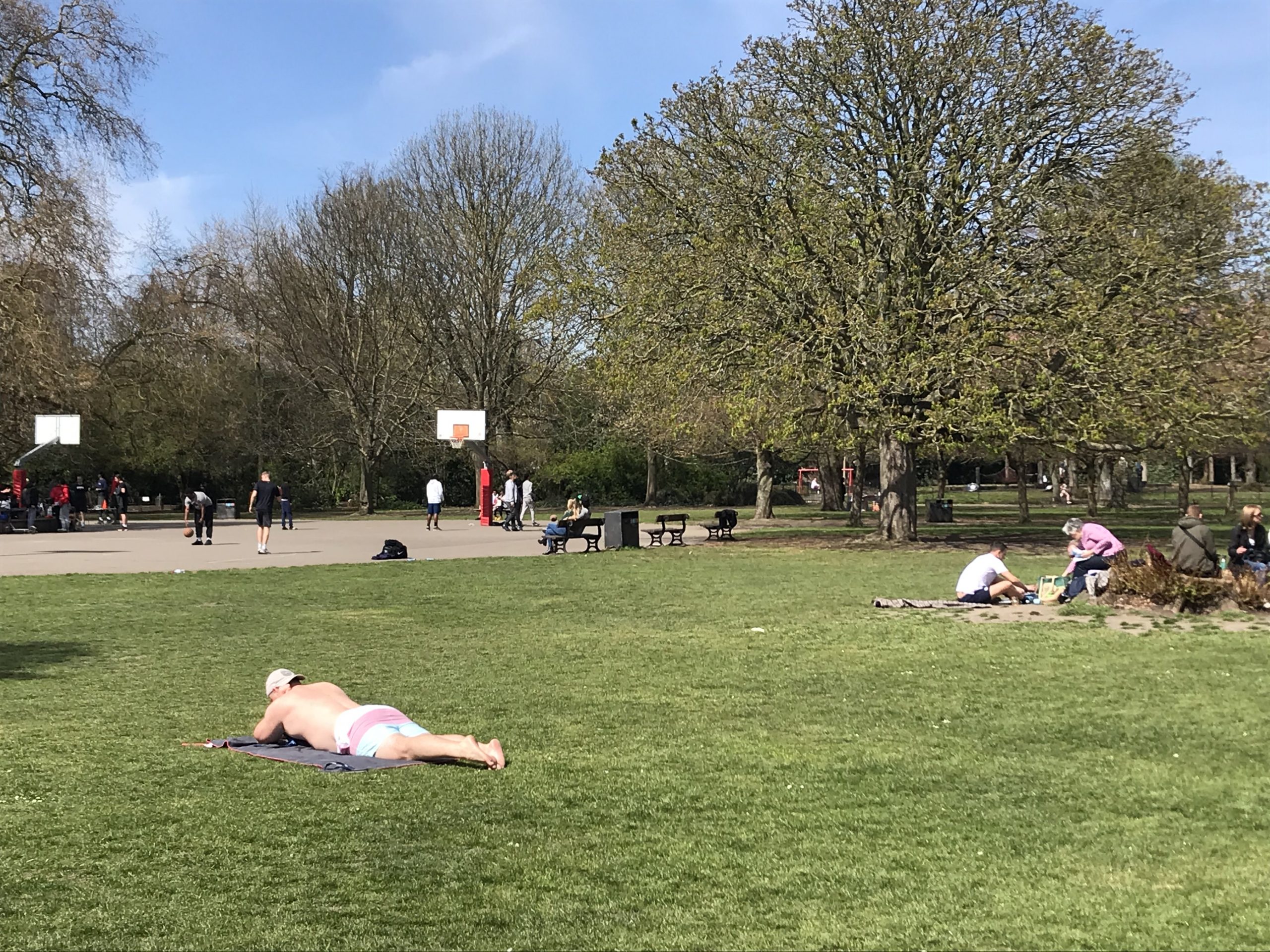 Different ways of enjoying the sunshine.

The work out groups and youths kicking balls were out in force, the tennis and basket ball courts were full and the joggers ranged from full lycra-ed trim twenty year olds to forty-plus-somethings in baggy rugby shirts that hinted at somewhat fitter times. The sun was warm enough that a few brave souls were either touching up the sun-bed tans or exposing alabaster white skins to the first rays of the year. There was a buzz of contentment that receded behind me as I headed for a proper pint. The rest of the day eased itself towards evening like a contented old geezer into his favourite armchair.

Is the crisis fully past us? I doubt it. Will there be Covid-idiots enough to kick off another wave? I fear it. I know when I switch on the evening news there will enough negativity to nag away at my sense of well-being but there are just times when you need to switch off. If you have got this far into the pandemic without losing a close loved one, if you live in a country with a health service that has already provided you with two vaccinations and if you have just been given extra gravy and roast potatoes without even having asked for them then you need to recognise your luck.

They’ll be plenty enough for me to rant about tomorrow.

Having shared my mellow mood I think I should shake you back up with a classic funk/disco song from 1979. I can’t really say that the name Al Hudson automatically springs readily to my mind. Much of this type of dance music from the late ‘70’s was probably past its best and highly derivative. This track has obvious echoes of earlier, more innovative bands like Kool and the Gang and Chic but it has a simple energy that makes even old geezers like me spring (well, sort of) out of that easy chair and strut some moves remembered from the days of revolving crystal balls. In this, should I say ‘one hit wonder’? “You Can Do It”, Al Hudson and the Partners had a new vocalist in their ranks, Alicia Myers. I think it is her soaring voice that helps this song stand out.

A version of the Blog has appeared in our local ‘views and news’ website – catch it here https://chiswickcalendar.co.uk/