I am Reading Again ! Plundered History. Stolen Culture. (Part One.)

I am Reading Again ! Plundered History. Stolen Culture. (Part One.) 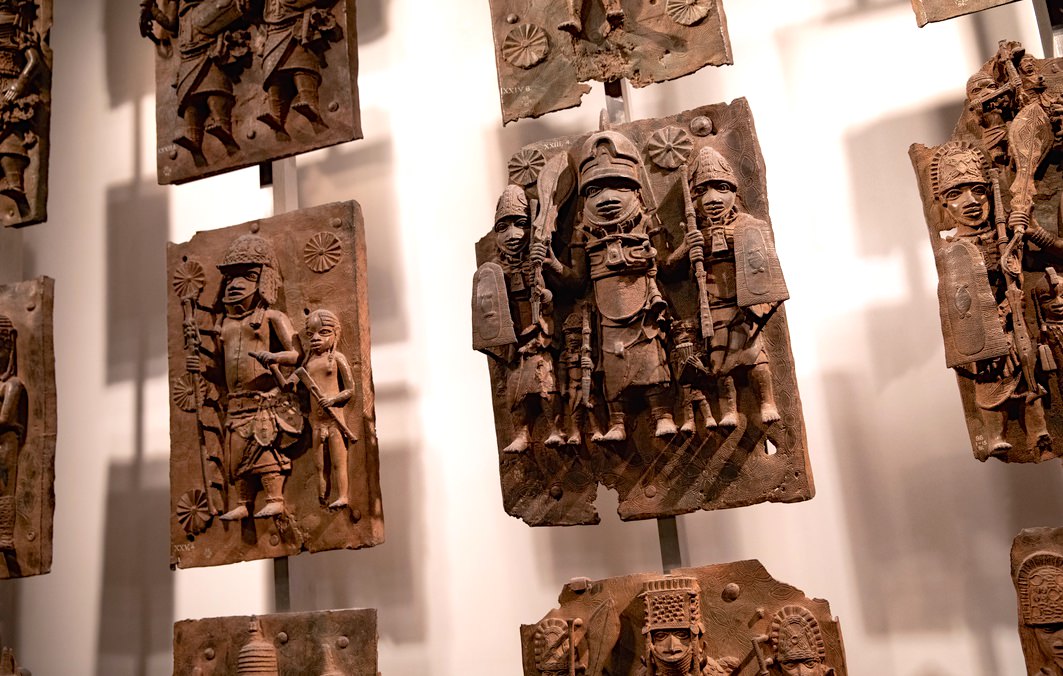 “A people without the knowledge of their past history, origin

With all the extra time available during the various Lock Downs of the past year or so, I had a fantastic opportunity for reading, which I utterly failed to utilise. Apparently in common with so many others, the ability to concentrate and read seemed to desert me completely me for several months. Hardly able to read anything for longer than three minutes, blogging became my replacement activity. So, recently it has been such a joy to rediscover my mojo and to see that pile of unread books, glowering on my coffee table with silent accusation, begin to diminish.

The catalyst for this change was that in the space of a few weeks, three authors I knew or knew of published a book on a connected topic and one dear to my heart.

Now, when I talk about my time in Nigeria in my blogs it is usually in generic terms. After all, most of the time I lived and worked in Lagos, a city that is broadly mixed culturally and ethnically. One that almost all Chiswick Calendar readers would have heard of without necessarily knowing anything about it other than it was once Nigeria’s capital city and has a superficially terrible reputation.

Lagos’ pre-colonial history has a foundation story from the Awori, a clan of the Yoruba people and has strong links to the once mighty city of Benin. The traditional name (Lagos, of course is Portuguese) is Eko. The traditional rulers are The Oba and his court in which the 13 White Cap Chiefs are paramount. The city’s rise coincided with its prominence as a trading port and then as the centre for the colonial administration. From the late nineteenth century the return of formerly enslaved people from the USA, the Caribbean, Brazil or from intercepted slaver vessels, usually via Liberia or Sierra Leone created another dynamic. It goes without saying that during this period there were outbreaks of British colonial violence, the most notorious of which was the shelling of the Oba’s Palace in 1851. Today, Lagos is the proverbial melting pot and is home to twenty million inhabitants; indigenes of every part of West Africa, let alone the colonial construct that is Nigeria. Not just the Yoruba, there are many thousands of Igbos, Hausas, Birom, Efik, Itsekeri and representatives of the more than 350 separate peoples that make up Nigeria who call them selves Lagosians, just as there are thousands of residents of London who call themselves Londoners whose roots are in other parts of the UK.

Before 2000 I knew plenty of Igbos and had travelled east of the Niger River but my knowledge of Igbo culture was pretty superficial. Most of my visits had been to the major cities of the oil producing areas: Port Harcourt and Warri. Like many people, my first shallow knowledge of the Nigerian-Biafran ‘Civil War’ (1967 – 1970) was that ‘the East’, the entire area that seceded from The Federal Republic and called itself Biafra, was Igbo. The reality, of course, is that core Igbo-land is a much smaller territory and that many other peoples of the South-South and South-East had been, not always enthusiastically, part of the Biafran independent state. So when, in late November 2000, I took up the position of boss of a soap factory in Aba, a fully Igbo city just a few miles from Umuahia (that for most of the war was Biafra’s capital), I was in for some serious education.

Aba is a commercial town. Everything is focussed on commercial activity especially the various markets. The city sprung up in the middle of the Palm Oil belt when in 1915 the British built a railway from Port Harcourt to collect agricultural produce: predominately palm oil and kernels. With the railway came trade and the uncontrolled growth of the city as a market town so that the infrastructure never caught up with the flood of people. Over time the availability of resources and location as a transport hub meant that Aba also became famous for small-scale manufacturing. Outlets for locally produced shoes and clothing, often sporting counterfeit brand names, are everywhere.

I lived in Aba for just under two years. I have to say, I never really gained an affection for the place, per se, but it did afford me a base for travelling around the area and learning more about one of the many cultures that exist outside Lagos from where few expatriates ever stray. It also gave me an insight into the massive marginalization of eastern Nigeria and the destruction of much of its original culture after the war. Infrastructure throughout the entire region, from roads to telecommunications as well as almost any social welfare has suffered from an absence of Federal investment. At the same time the failure of many of their own State Governments to channel resources meant for the benefit of their people into their own pockets has been shameless.

In case you are wondering what all this has to do with the resurgence of my reading habit……. Please bear with me. 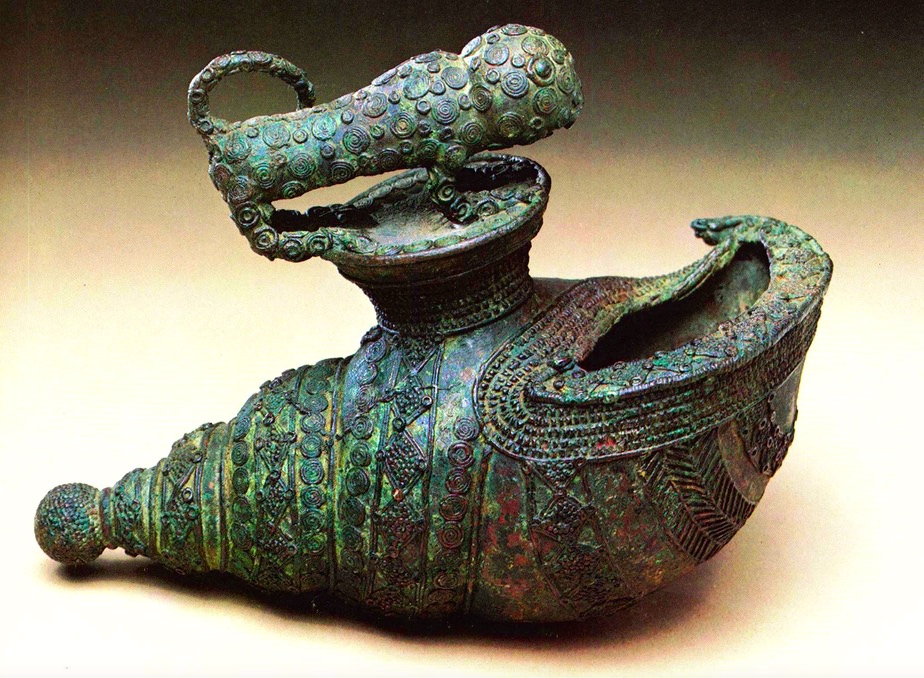 The Header picture is the famous Benin Bronze Plaques in the British Museum but this piece, also made by the lost wax process, is from the Igbo Ukwu site near Onitsha. There is evidence of settlement there from the 10th century. It is unclear how far it extended and research has been limited. If this had been in Europe there would have been funding for considerably more investigation. There are definite burial chambers, which this piece comes from. Much of the metal work was made locally but thousands of beads were found from what is modern day Egypt and the Nile Valley, Swahili speaking areas of East Africa and even India – showing that the people of Igbo Ukwu had a considerable trading network all of which pre-dated the arrival of Europeans.

At this very moment the debate is heated about the demand for the return of artifacts taken during the colonial conquests of Africa during the nineteenth century that currently reside in Museums all over the world. David Olusoga, the historian whose views have been prevalent concerning the Bristol Colston Statue protests and who has several documentaries on BBC iPlayer at the moment, has called for the return of the Benin Bronzes looted by the British in the punitive expedition of 1897. It is not just African cultural heritage, nor the British Museum, of course. Recent controversial examples range from the Elgin Marbles belonging to Greece, Indigenous American religious items, the recent return of Sri Lankan ancestors’ skulls from Edinburgh to Trojan jewelry in German Museums.

Yet auctions of African art and cultural artifacts are still going on and many of these were not looted from a century ago or even during the colonial era. There have recently been public sales of items of Igbo origin that would almost certainly have been plunder from the Biafran War just a few decades ago. There is even a market for the very wealthy of items pillaged from Iraq and Syria even more recently.

Learning more about these issues, fundamental to how we interact with items that have sat in dusty museum cases or on the designer walls of wealthy collectors, has challenged my own thinking on this subject. Discovering why it is such an emotional and powerful issue for the people whose religious and cultural foundations have been shattered, has been what has bounced me back into post-Covid reading.

In the second part of this Blog I shall share some of the incidents and the books that have recently catalyzed my thinking and helped me understand more deeply an issue that underpins much of the so called Culture Wars and cut through the superficiality of some of the noise there has been about the future of art, artifacts and statues in our public spaces.

A Voice of Honey covered Coal and Gravel

I have to thank son George for this blog’s musical closing. As the son of an opera fan I grew up knowing about Paul Robeson’s marvelous rich bass baritone voice on such songs as “Old Man River” and his performances in ‘Porgy and Bess’. However, George has been reading up Robeson’s incredible life as someone who challenged cultural and racial stereotyping. I hadn’t realised, for example, that he attended SOAS here in London and there is a Halls of Residence there named after him. Inevitably, his political views did not please a US in the thralls of McCarthyism and he suffered severe racism and FBI persecution. He was a prominent activist and was a considerable intellect as well as being a renowned performer – for all those things as a man of colour in immediate post war America he suffered. In this clip, very much of its time, his amazing voice is featured but I also chose it because the narration and editing show how far we have come in considering cross-cultural issues while illustrating still some of the broader points I am making in both parts of this blog.

Sorry, I can’t resist it. The British and Irish Lions squad has just been announced, captained by a proud Welsh man Alun Wyn Jones. Lions tours still encapsulate everything that we rugby fans love about the game and it is the one time when supporters from every part of the British Isles put aside differences and sing each other’s anthems with gusto. There has probably been no better rendition of Wales’ ‘Land of my Fathers’ than Robeson’s so you get a double treat. Enjoy.

As is usual a version of this blog has appeared on our excellent local News and Views Website Chiswick Calendar that you can access here.    https://chiswickcalendar.co.uk/