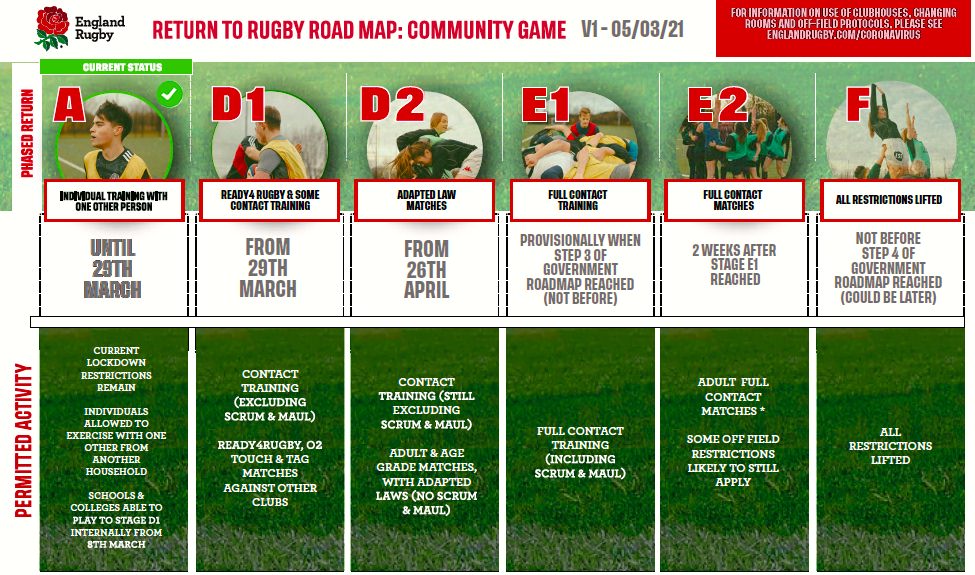 “We have not met before. If I hear you shouting for anything else again, I will penalise you.

This is not soccer.”

As this week sees many of us joyfully running into the open arms of the nearest publican, in my case far more of a priority than the barbers, probably the more important relaxation of restrictions for the Nation’s physical health are those around community sports. While flagship sporting events have been taking place, albeit behind closed doors and within tight ‘bubbles’, playing fields, sports grounds and even gyms have been empty. Two weeks ago the relaxation of rules on outdoor team activities heralded an explosion of community sports on five a side football pitches, tennis courts and basket ball courts. The latest popular fad ‘Padel ball’ has opened new courts at our local Rock’s Lane sports centre.

Yet, as I have written before, as Chairman of local, Old isleworthians RFC, the physical contact nature of rugby makes our sport the more complicated and our return to ‘normality’ the more cautious of most sports. Clearly running about is not an issue but tackling, what we euphemistically call ‘contact’ but which is really ‘bashing into each other’ and exactly what so many of the lads are gagging to get back to, becomes more problematic. Then there are scrums and mauls that represent real face-to-face transmission risks. As the government set out its timetable, England’s RFU released the Community ‘Road To Rugby’ Roadmap with stages timed to coincide with the easing of public restrictions.

So, that is what is now ‘legally’ possible for community clubs but during Middlesex Club meetings it was clear there were different responses. Some clubs/players were ready to move full on as soon as possible while others were more reticent. The County was ready to arrange short ‘Ready4Rugby’ and/or ‘Adapted Laws’ leagues or ‘pods’ of teams if there was demand and it was down to clubs to decide. It should be noted that I am talking Adult Rugby because the age group game has other protocols. Locally there is a wide difference between clubs in terms of their infrastructure and financial clout. The larger clubs may be able to do things that smaller clubs such as OIRFC cannot and our ground is far too small, nor do we have the resources to allow us to run youth programmes. One thing I should add is that outside the professional game, at county and club level, this work is all undertaken by volunteers. These are the kind of people keeping community activity right across the country going: more unsung heroes of the pandemic!

So, on our side, Club Captain Stu did some checking with players and we had an informal Zoom Committee. Among the issues we had to consider were: access to the full pitch when cricket starts, non compliance of our modest changing rooms & showers, when and how will the bar be able to open, when will players be ready for contact after a year with none and how can we be as inclusive of ages and skill levels as possible. In addition, OIRFC have a proud touring tradition; our last pre-Covid tour in September 2019 was the club’s 100th! Usually these are within the UK but every now and again are away to Europe or even to the USA. We would normally have an end of season tour and another pre-season even if these were just a couple of days and nights away. One or two matches with a local club anywhere from the Isle of Wight to Burton-on-Trent bond the guys across age ranges. In fact, one thing being Chair of the club has shown me is how community sports have such an ability to bring together generations that in the modern society have too little connection. That last tour included members from 74 to 19. How many activities see as wide an age range? It should be said that many of the 60 year olds take the opportunity to behave like 20 year olds for a couple of days and then need two weeks to recover – but that’s another story! The adage ‘What goes on tour, stays on tour’ is sacrosanct though we do have our own disciplinary committee and fine system. Let’s just say that one of the most frequent questions I hear are ‘When can we go on tour again?”

So, we, as a club have decided not to pursue the offer of a couple of ‘Adapted Code’ games or even full contact matches for the rest of the season. Rather we are focussing on including as many as possible in social ‘Touch Rugby’ and maximising the numbers that can have a run around and throw a ball together. The younger and potential first XV guys will start building up again as gyms re-open and later we will move to more focussed match related activity as we prepare for pre-season training. At the moment about 25 people are turning up for ‘Touch’ at 7 on a Wednesday evening but when the Association’s cricket teams start playing and the club bar opens we will have Saturday afternoon run arounds followed by that social pint. Different clubs will be taking different paths to re-energising and preparing for what we hope and pray will be a full and uninterrupted 2021/22 season. Most clubs are welcoming new faces and encouraging old faces to return so, if the warm weather (we live in hope) is making you ask yourself if your old boots or trainers are still in the bottom of the cupboard, do check out your local club. If you are in West London do come round for a run around or, when the cricket starts and the bar opens pop in for a pint. Feel free to enquire via our website or email directly.

Red Roses and the women’s game

Meanwhile, has anyone noticed how good Women’s Rugby is these days? In fact, International women’s rugby seems currently to have more skill to offer, certainly in the area of off-loads and linking play, than the men’s game that is attracting more and more criticism for its apparent obsession with bulk and collision. I was delighted that BBC announced that it would provide coverage of the year’s Women’s Six Nations competition that started the weekend before last. Yet instead of building up the game further – nearly two million viewers watched a friendly England vs France in the autumn – they have relegated it to iPlayer and not shown the first two matches against Scotland and Italy on the main network. Why Not? When the Italy match was on iPlayer, BBC2 was showing an episode of ‘Flog It! For its sixth repeat! That would have been an opportunity to watch an entertaining game that saw Italy dominating the first half only for England to poach two tries in a manner that had it been Johnnie May, would have had the media purring. In the second half England brought some serious talent off the bench and blew Italy away, running in 3-67 winners. England are currently seeded No 1 in the world, just marginally over New Zealand who beat ‘The Red Roses’ 41-32 in the last World Cup final (England won the previous World Cup in 2014 beating Canada in the final). With talent such as two recent World Players of the year on the pitch, Sarah Hunter and Emily Scarratt, England’s class shone out. When Poppy Cleall who is possibly the in form player of the year came off the bench with her twin sister Bryony it was game over! I am particularly impressed with scrum half Riley’s fast paced passing and Jess Breach the Harlequins winger who has an amazing turn of speed and fast feet to match. Having made her debut in 2017 I am fascinated to watch how she is developing her game and like the best wingers gets involved across the pitch and is strong defensively. 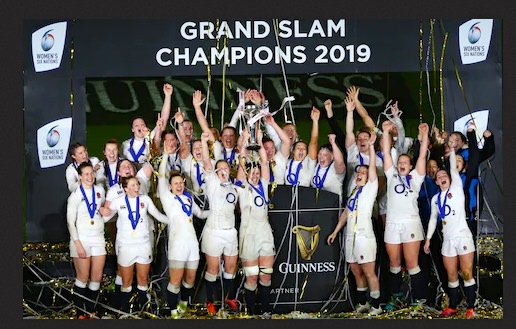 I also fail to understand how, with the exception of the Telegraph, the women’s game is practically ignored by the written media. The Guardian that is supposed to be a champion of diversity had a single article on the Scotland match and then was silent for the rest of the week. No analysis of the game or players’ performances or even announcement of the team against Italy. I find this disappointing. Yet it is noticeable how several women feature as analysts for the men’s game including England’s third World Player of the Year Maggi Alphonsi and 82 cap Danielle (Nolli) Waterman where they clearly demonstrate a technical understanding of the game to match most of the male commentators. At OIRFC we have a pride in Nolli because her father was probably our best ever player. Jim Waterman went to Isleworth Grammar and played for the Old Boys in 1961- 62 when he was still at school. (Many of us did in those days, even playing for the school in the morning and then – in my case – with the elders 3rd XV in the afternoon. Certainly not allowed now!) He also came back and took part in a couple of charity matches over the years. Jim went on to play over 400 times for Bath. He also played for Somerset and Western Counties where he took the field against Fiji and the Springboks.

So, there we have it. As I am finishing this I am aware my local, The Raven, opened its doors nearly three hours ago and I am still sitting at my living room table/part time desk! 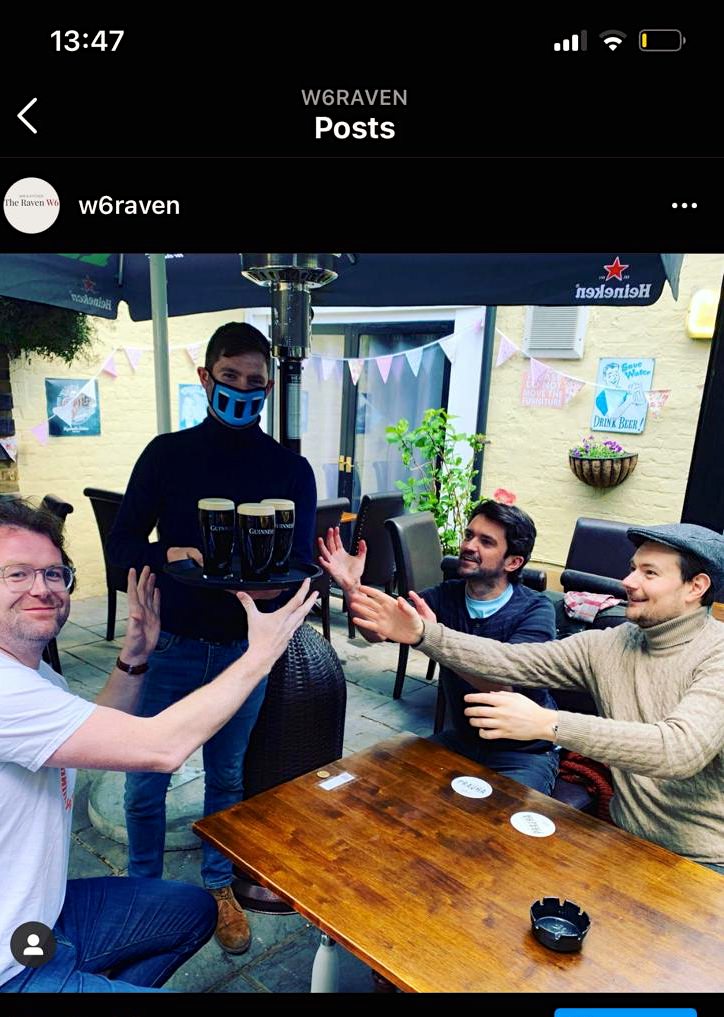 The first Raven pints for how many months? By the time you read this I would have sampled a few myself!

Although I know its cold outside the sun is shining. Normality, and some might say the recovery of mental health, will be complete when it is possible to run around with team mates of whatever sport and whatever gender and thereafter retire the bar to relive those moments of shared expression. I might even skip a couple of steps on my way down there – in about three minutes. Cheers! 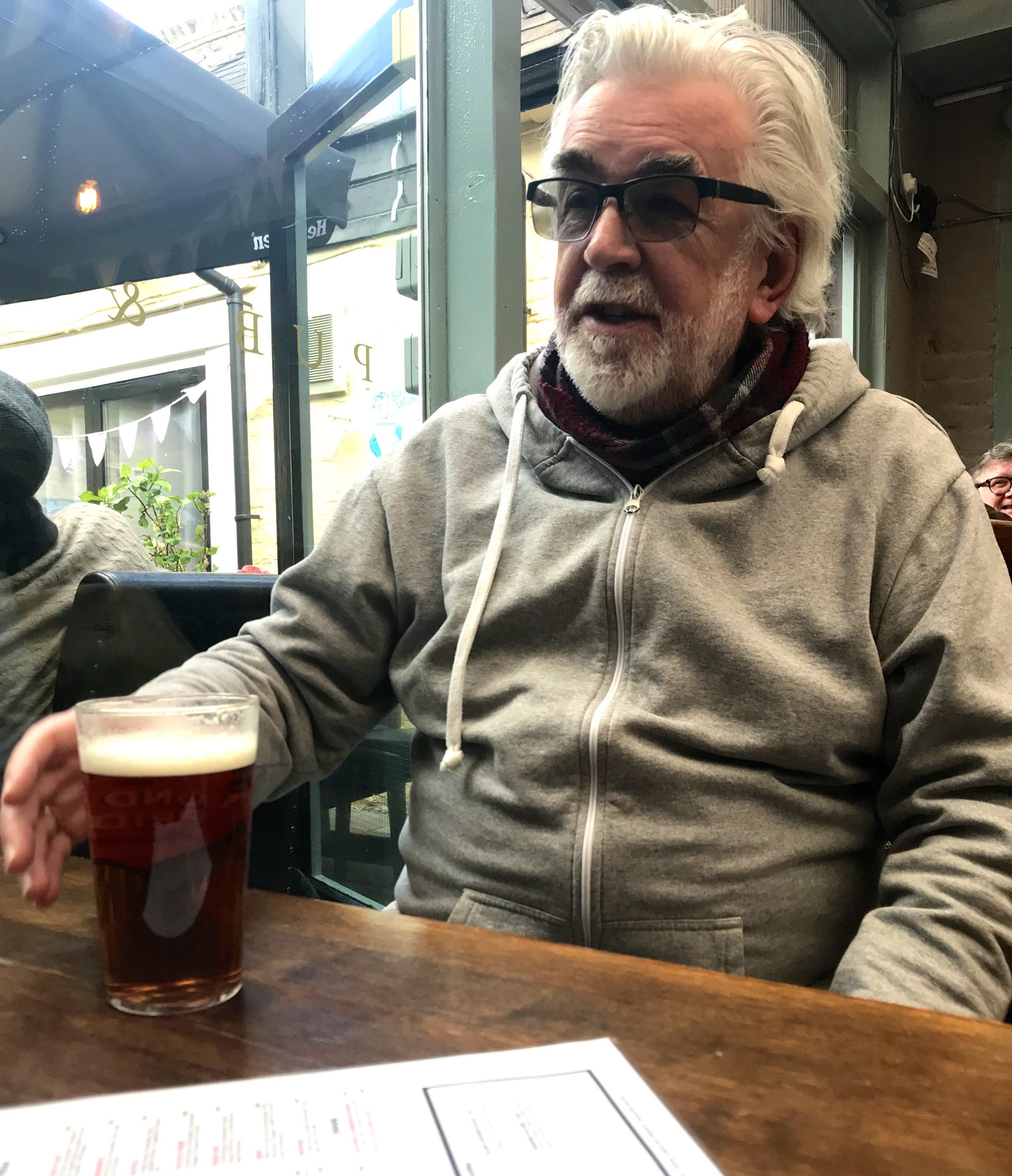 I leave you with the sound of that social side of rugby – from the grassroots community game to the highest level singing remains a core part of The Tour…….. as you can see here

A version of the blog has already appeared in our local “News& Views” website – https://chiswickcalendar.co.uk/