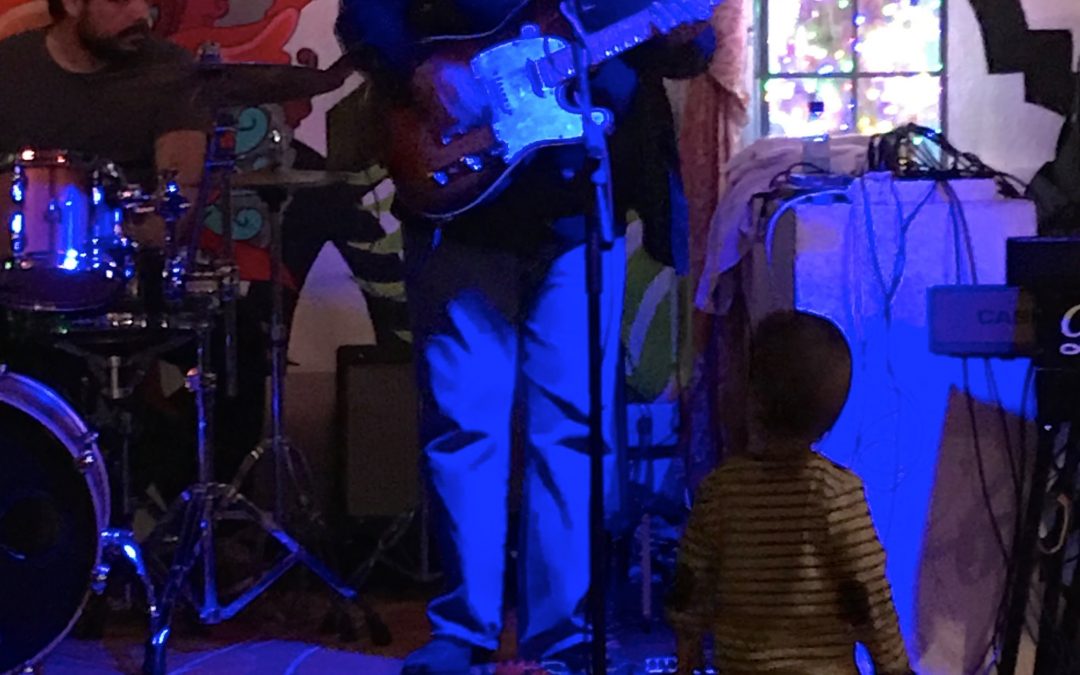 So, there is always an internal conundrum when writing or posting about a special destination and particularly so about La Herradura. Part of me wants to share the joy of the place and, of course, to support those friends I have made who run bars, restaurants and cafes like La Cochera, Las Maravillas, El Salon, Cupola and No.20. At the same time, this is ‘my little secret’ and if it became too successful it’s ‘specialness’ would be destroyed. I know Anne and several of her mates feel the same. I have brought quite a few friends to stay, in fact over 45 came from all over for my 65th, and they have unanimously and unequivocally loved the place too. Either way, there is so much special going on along this coast, out of the way of mainstream ‘Costa Del Sol’, that it deserves recognition.

Apart from the usual La Herradura venues the two most exciting gigs I saw on this, my most recent trip, in May were outside of the village. The first was a rather bizarre experience. Two of Anne’s friends, Barry and Barbara, had invited us to join some more friends to see an American Blues guitarist, Richard Ray Farrell. His pedigree was pretty impressive and he came with a strong recommendation from Mama Paula who told me he was one of the best harp-playing guitarists she had ever seen. Just a couple of years younger than me he has been kicking around New York, then Germany and Spain since the 1970’s and Anne was excited that we had a chance to see him play while I was around. The only slightly strange thing was that he was playing at a Spanish Hell’s Angels convention! Barry’s mate was an ex Angel from Redcar (Swinging Monkey’s Chapter – there’s a story to that so a prize for anyone who can tell me where that name comes from?) and was a supporter of the local ‘Malas Pulgas’ * Chapter. We were given Angels’ tee shirts to put on but to these strangers the 200 or so bikers seemed friendly and welcoming. The gig started badly as a high wind sprung up and blew some speakers over and, curiously, a symbol that as it fell its edge cut right through the microphone lead. This led to a somewhat of a frustrated Farrell having to quickly move his gear and squeeze into a corner of the small bar. However, it seemed his annoyance turned into energy and we were treated to a furious Blues set that, apparently, was a lot more aggressive than his usual style. Most of the Angels preferred to stay outside and admire each other’s bikes but in these rather ‘scrunched up close’ clips of Farrell playing there are glimpses of typical Hells Angels’ gear and insignia. I was mightily impressed with the set, particularly some slide and some harp playing though frankly, I thought the backing boys, especially the drums, were not up to Farrell’s standard and detracted from the performance. Nevertheless, take a look. I will certainly be hunting him out next time I am over there.

The first clip, squeezed in the bar features some classic electric blues and watch out for the Angels’ Insignia behind him. I kind of thought this was reminiscent of my west coast favourite Steve Miller but Farrell is not a particular fan apparently.

So, Anne had told me she was spending more time hanging out with a number of Spanish musicians in Almunecar. Her guest spots and the jams in la Herradura have become a little ‘same old’ and this change of emphasis and faces were giving her some fresh energy. The guitarist and music engineer Jose Montalvo Martin has been encouraging her to express herself and is pushing her to do some full sets with his band. Meanwhile, he hosts a regular Sunday Jam at Jaime Pelillera Playa, a bar along Almunecar’s front and we were able to catch it after having had a Flamenco lunch at Maravillas – see what I mean about spoilt for choice. Well, what a treat. For the price of a beer I was able to sit and watch a number of musicians play individually and collectively a medley of jazz, blues, rock and pure pop that was never less than fun or quirky to sometimes really impressive. Jose, as the ‘ring master’ has a light touch and was sympathetic to the differing styles on offer. In particular, he gave Anne room to stretch herself and it was clear singing with him she felt relaxed and confident – as you can see in a couple of these clips. Jose is no mean guitarist himself and I have been told he will be opening his own music bar in the next few weeks. Watch out for a slightly older guitarist Russel with an unusual sound and the outstanding woman Chrissy Quayle on flute/piccolo and sax as they deserve a mention.

Anne does a couple of Amy Whitehouse songs that have become a kind of standard at jams and as a guest. ‘Back to Black’ is probably her best and often sings in beach front bar jams in La Herradura with her mates Terry, Tony, Tijs, Fran and Candy.  This clip is at the same jam in Almunecar.

The last clip just highlights some of the musicianship – though as can be seen, this is a collective jam not a rehearsed band but the quality of some of the playing is clear.  Russel, a Brit, is the guitarist working out the riffs with Chrissy on the outstanding Piccolo and Billy with the cap (from the US) in his own guitar world.  Jose, as always, unobtrusive in the background.

Well, the jam was on the Sunday evening and Monday I flew back to London. As I mentioned – six gigs in four days, that included Flamenco, light jazz, blues and a general jam. I didn’t have to pay a penny entrance just buy a few beers and a lunch. No wonder it’s a secret that many want to keep for themselves. Hasta Luego, La Herradura. I will be back. 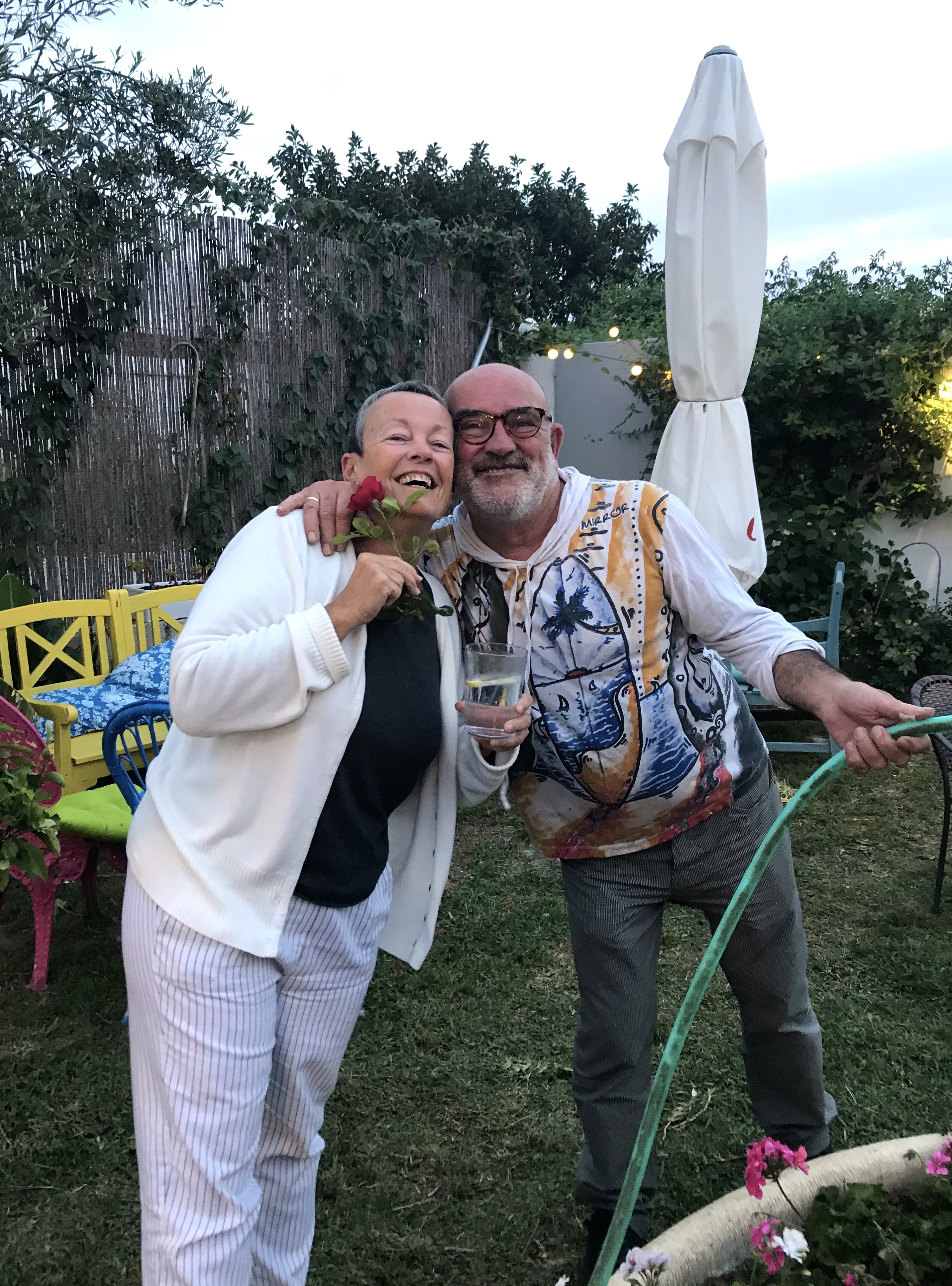 Anne helping her friend Antonio with the gardening – or sort of!

* I am told it translates something like ‘bad sore’ or ‘bad fleas’ but as its more slang than classic Spanish I can’t be sure.