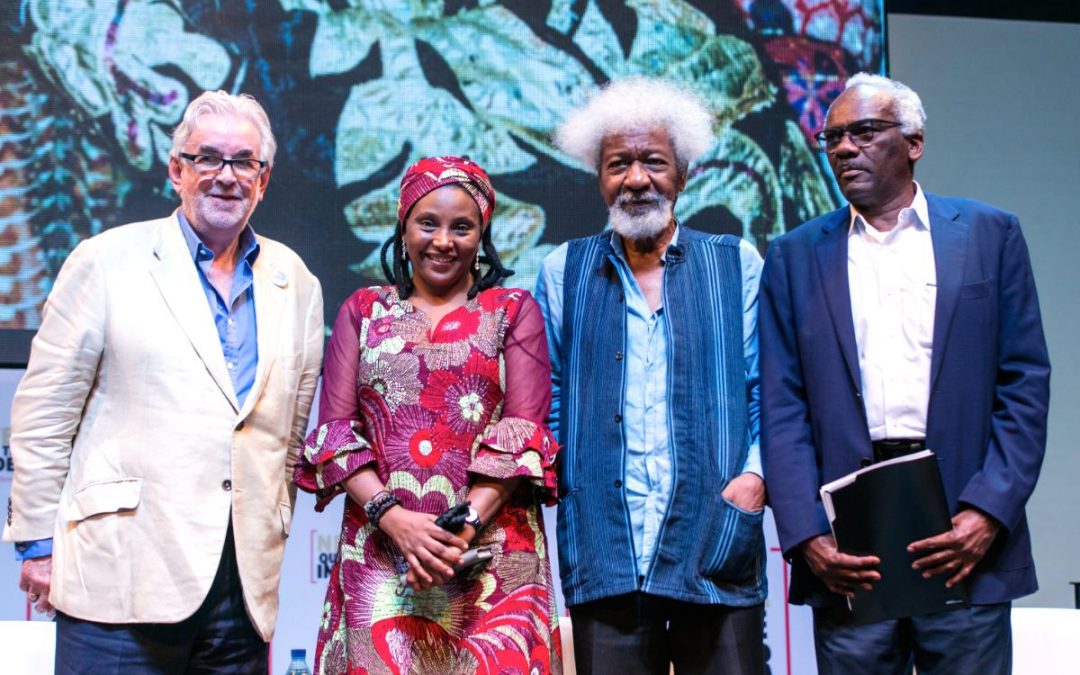 Excerpts from Prof Wole Soyinka’s review of
“Never Quite The Insider. A Nigerian Memoir.”
At TerraKulture 17th October 2019.

The second and concluding part of Prof’s Review……………..

‘A final word of commendation, and an inducement to such would-be film-makers: Keith Richards does not present us with stereotypes, just people. A truthful parade of individuals, groups, families, associates, consortiums – team workers as well as the conniving, loyal and disloyal, thieving and principled, self-sacrificing and self-promoting, egotistical and self-retiring, gifted and retarded, some oozing at the pores from overdose of integrity, while others conformed to former Prime Minister David Cameron’s description: fantastically corrupt! The designation of Corruption as uniquely Nigerian or indeed an African phenomenon has however always been a demonstrable distortion but Keith Richards contributes to that debunking by taking us through its refined operations in corporate culture. Here is our author’s commentary on that basically prejudicial categorization:

“A corrupt expatriate can make collusion and manipulation even easier and identification even trickier. There is still a general assumption that expatriates are ‘more’ honest: a major misconception as my John Holt experience illustrates.”

We hear a lot about whistle blowers these days – well this is one grandfather of all whistle blowers – indeed, his explosive indictments of his own expatriate colleagues deserve a totally different designation – perhaps ghetto blaster! We talk of some governors, even legislators blithely carting away government furniture and fleets of luxury vehicles – from assigned quarters, or selling such to themselves – and at rock-bottom prices? Well, just follow the career of some of Richards’ colleagues and their basement bargain approach to company property as they moved home on transfer, or simply changed residence! Most endearing of all, he is quite candid about his own perceived shortcomings – the road not taken, rational and productive options discarded, and avoidable failures incurred. One other book by a businessman comes to mind – Dr. Jibunoh’s own narrative of life in the murky world of business, with the same lament: the loss of developmental opportunities through the exodus of serious-minded business ventures, the abruptly curtailed productive life-span of enterprises that would have soaked up the swelling army of the unemployed – all thanks to that voracious bugbear – Corruption! With books like these, Nigerians had better sit up and take notice.

Failure to accede to that implicit cautionary is a nightmare scenario, captured so frighteningly in the following words, the narrative of his acknowledged most challenging posting, near literally a war zone. This happens to be Aba, but was applicable to many cities at the time of his biographical witnessing:

“About the time when I first arrived in Aba, the degree of lawlessness that Abians had to contend with had about reached its nadir. As the evening’s traffic flow quietened down by as early as 9.pm, the streets became quiet. You really did not want to be out and about after 9.30pm unless you were able to take a major risk, a risk so great that the police themselves refused to exit their station compounds after that time. This was seriously impacting on business and made traveling to and from the markets difficult.“

The Bakassi Boys were however no laughing matter, and their intrusion into Keith Richard’s purlieu, albeit clearly understated, is no stuff for weak stomachs. This work resurrects issues that have long been papered over, precursors to the current malaise that covers the nation like a blood-stained shroud. An outsider’s marginal intersection reminds us that some of those politicians and other respectable citizens of affluence and influence made their beginnings as certified killers, with a roll-call of victims as their sole Curriculum Vitae.

If you read nothing else in this challenging book, be certain not to miss this chapter that so off-handedly lays out the diabolical nexus of business, crime and corruption. Then, if you do find the courage, visit the famous Ore junction, that links Ondo, Ogun and Edo states. Speak to the normal denizens of that space. Ask them to describe what that junction was like even as recently as two years ago – the vitality, the bustling market and eating concourse of humanity, its Last Stop filling station for motorists before plunging Eastwards or northwards. Compare – then to now! Then ask, what has caused such a deleterious change? What has turned that concourse into a ghost junction? And so rapidly? And I am speaking of a time long before the daughter of a famous political leader was shot down in cold blood at that very intersection, a comparatively recent event. So this has nothing to do with that high profile, truly depressing assassination, an event that is still filled with unanswered questions. No, ask instead why the market women and men, the commuters, the food sellers and rag-tag mobile trolleys and head balanced trays of condiments, utensils and other bric-a-brac have turned their backs on that commercial hive of human activity, left it to ghosts and memories. Then see if you are not prodded into mouthing the words of that iconic singer, Pete Seeger and his memorable lyrics: “Where are all the flowers gone?”

What applies to Ore of course goes for a hundred such heaving commercial communities all over the nation. More may succumb. The nation is dying slowly, piecemeal. Keith Richards does not explicitly echo Pete Seeger, unlike my own variant on Seeger’s anti-war lament, smuggled out from detention during the Civil War and titled “Flowers for my Land.” Nonetheless, from Yobe, Maiduguri, Kaduna, from Benue and other axis of stifled human ferment, the anguished cry resurges:
“Where are all the markets gone?” ‘

Apart from expressing my profound gratitude to Professor Wole Soyinka for his kindness and generosity let me add my thanks to Kadaria Ahmed and Kate Henshaw for their professionalism as Chair Person and MC respectively. Throughout my career I have believed in surrounding myself with good people and that stage saw the denouement of that philosophy! Kadaria also kindly sent a camera team to video the event that will be available on YouTube and here after a while. 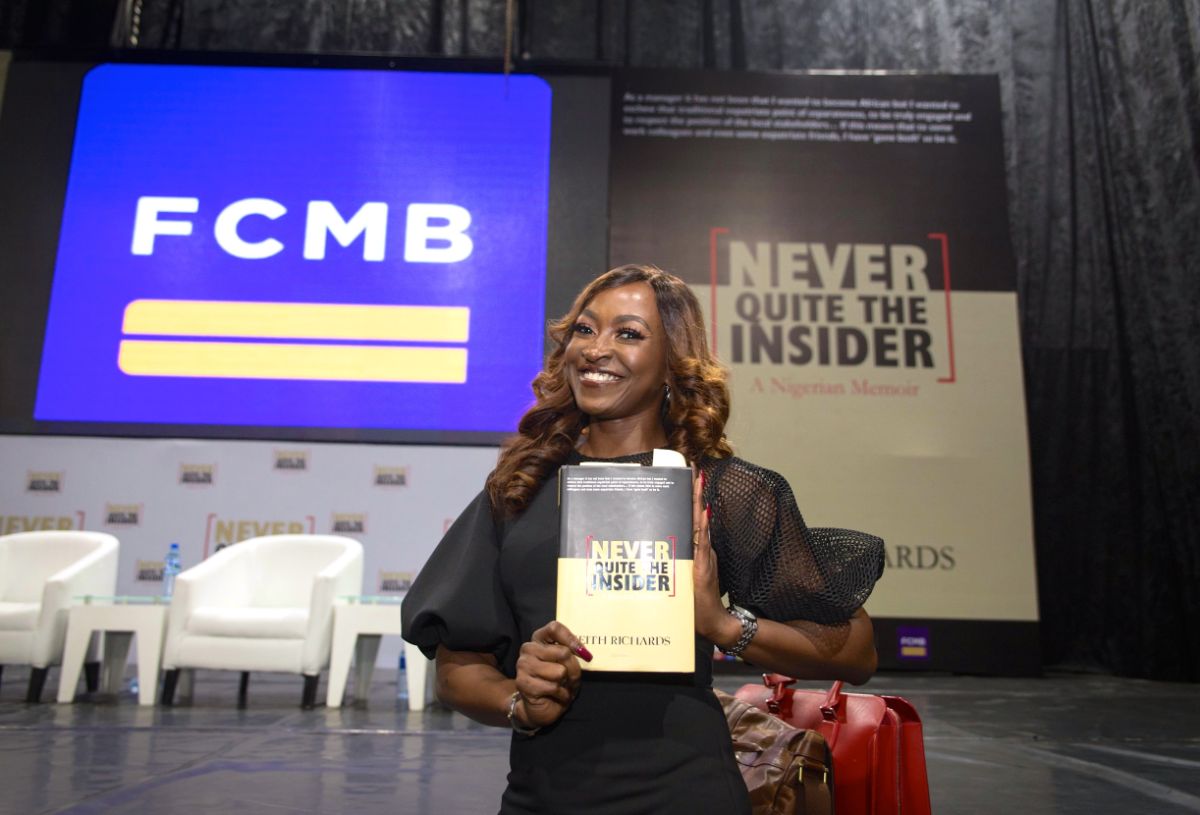 The special Kate Henshaw smile and thanks to FCMB

I would also like to thank Ladi Balogun, Group CEO of FCMB Plc. for their generous sponsorship as well as Marcus and Tim at AfricaPractice. Brian and Paul at Brian Munro Ltd were kind enough to support with the bar and Anders at Promasidor Nigeria Ltd for Top Tea and Cowbell Coffee and snacks. Toks Mudupe was also kind enough to co-ordinate media.

A special hola to Kachi, Vitus and Andrew – my friends and colleagues who were generous with financial support, logistics and, most importantly, with encouragement and inspiration. We are planning our own joint book together – watch this space. 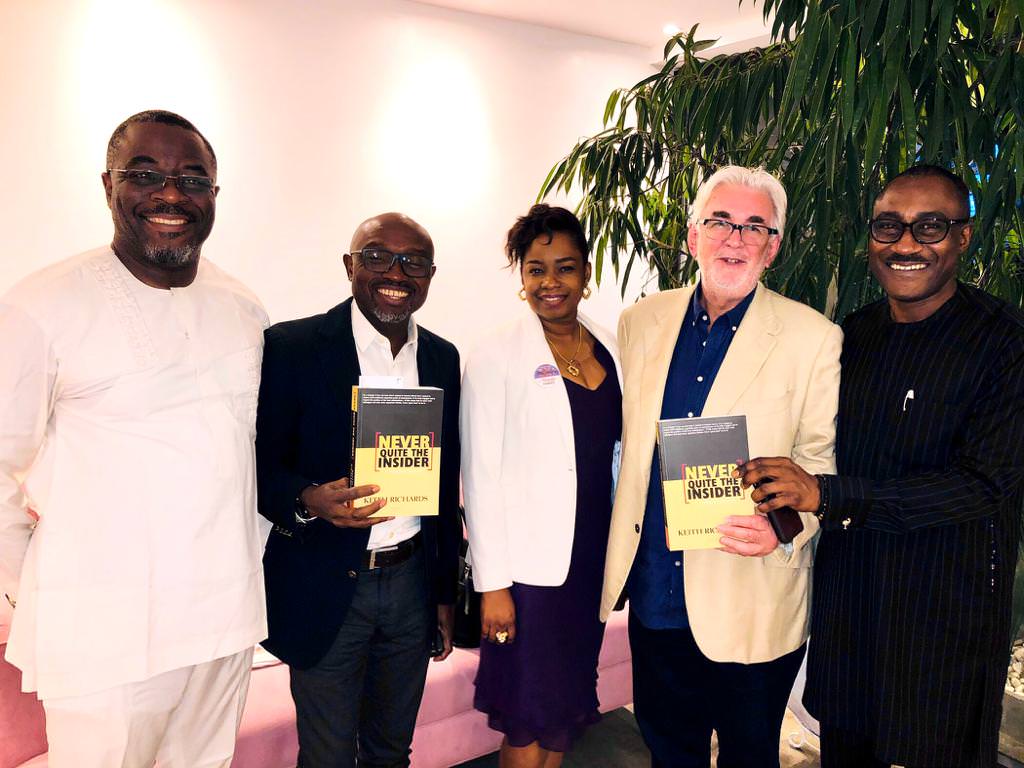 Finally, let me not forget my Publisher Bankole Olayebi and his wife Femi and their daughters plus the whole team at Bookcraft Ltd of Ibadan. It is such a pleasure to work with someone so dedicated to his art – not to mention the red wine.

Akomu “koko” Eigbe akomueigbe@gmail.com was the event organiser and can be commended and recommended! Cheers too to Bolanle and everyone at Terra Kulture.

I was looked after so well by Richard and Elda in their lovely home during my stay – Cheers as always !

Honourable mentions to Ugoma, Oti, Foluso and Rod for also hosting events and being there.