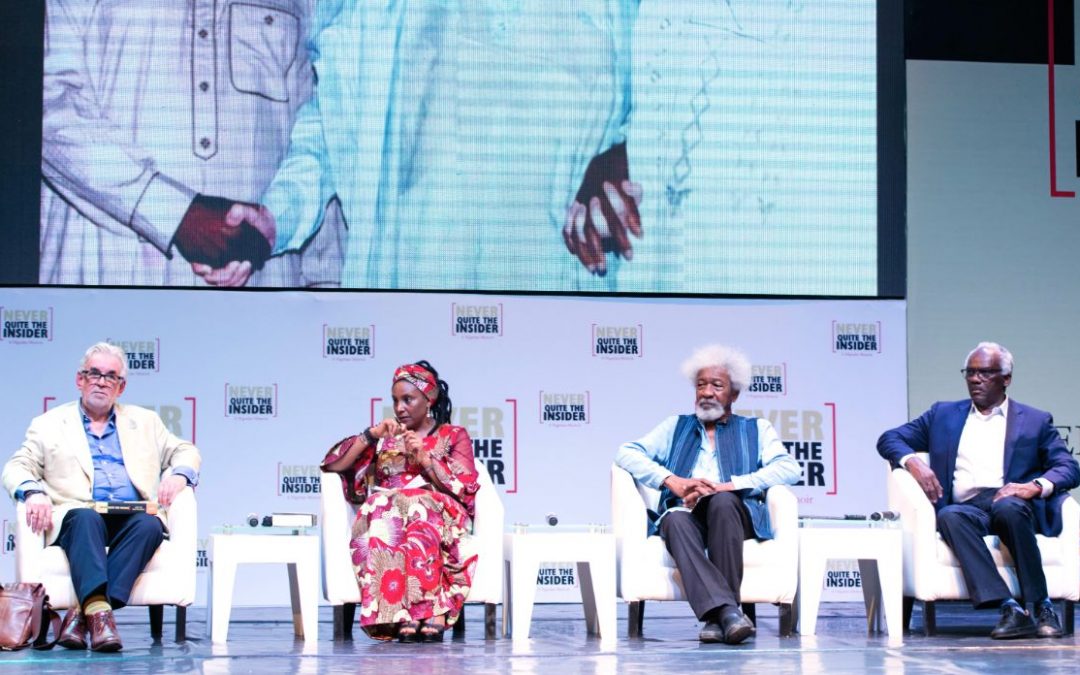 “Never Quite The Insider. A Nigerian Memoir.”

It would be hard to fully describe my feelings as I walked on that stage and turned to applaud Professor Wole Soyinka who followed me on. Some trepidation certainly: conflicting humility and pride, anticipation at what was to come and a recognition that I was indeed a fortunate human being. The room filled up quickly with so many friends and colleagues all eager to hear Prof speak. After professional MC’ing from Kate Henshaw, Introductions by Chairperson Kadaria Ahmed and Publisher Bankole Olayebi and a short reading by myself Prof strode to the lectern and for forty minutes held the auditorium spellbound. If you doubt me just look at the faces in the audience. This is an abbreviated version of his Review spread over two posts.

‘We mostly see that peculiar species known as the ‘expatriate’ – I mean, really see them as they are, or if you prefer –  “see dem as dey be” on festive occasions – a  wedding, a child-naming ceremony, a retirement party, chieftaincy conferment, funeral outing – simply, on social occasions. I rely mostly on the testimony of media photos when they are togged out in local traditional dress, registering varying degrees of adjustment, unease, discomfort, self-mockery and/or sense of duty and capacity for endurance. At such occasions, you can see it written on their faces: “wait until my pub-mates in Shropshire see me in this costume”. Actually, it is more likely to read: “if you ever again catch me in this Agbada or Babbanriga outfit, call me a so-and-and-so.!”  You can virtually read on their faces images of that longed-for release when they can get back into some rational office clothing or after-hours tennis shorts at the club, nursing a cold beer – or perhaps Guinness since we are in a largely Guinness territory going by this author’s business and bibulant affiliation. In or out of their comfort zone however, the word ‘expatriate’ at once identifies, and simultaneously alienates them in relation to their temporary or adopted home.  Here is our author’s take on that defining sartorial infliction:

As always – mildly buried within that seemingly straightforward ‘point of view’ of the physical sartorial torture is a sociological barb. Here it comes:

“The next ‘practical joke by gift’ is the full Agbada. This is the ubiquitous outfit worn by ‘ big men’ all over the west coast. Traditionally it consists of trousers with a chord (sic) at the waist, usually with a matching ankle-length long sleeved shirt but always topped off with the voluminous and free flowing Agbada itself…. The whole point about the heavily embroidered and open sided square of the Agbada  is that it is highly impractical . This is intentional, as ‘Big Men’ are supposed to have practical things done for them, not ‘by’ them. “

True or false? Well, we’ll leave it at ‘arguable’.   But that very comment stamps our author’s narrative and analytical temper which is – candour. Setting it down as perceived and as experienced. You can depend on Keith Richards not to miss a chance to put his colleagues, friends, antagonists and environment – on the spot, if not exactly through the wringer. Even within what appears to be a straightforward delineation of local colour and neutral seeming data, there lurks the hidden sociological barb to wipe the complacent smile off the reader’s face, dealing right and left, expatriate or local, without discrimination and without any pietistic concessions. Keith Richards does not subscribe to that doctrine that I often describe as one of moral flaccidity known as ‘Political Correctness’. I find that refreshing. I suspect that, even over and above the engrossing content, in turn dramatic, hilarious and informative, that that defining attitude contributed largely to my accepting to play a role in the promotion of these Memoirs.

I must however confess an even more personal input: I was riveted by the many parallelisms with  my own trajectory through a vastly different field – the Arts! How far back does one go? The Black and African Cultural Fiesta – FESTAC 77?  COJA – the All-Africa Games   for which I was Artistic Director Opening and Closing Ceremonies? Black Heritage Festival, Lagos, which I took through some five or six editions, culminating in LAGOS@50 Anniversary – over a year in preparation. Or shall we consider my brainchild, the Road Safety Corps – first on a state level, and then nation-wide? As I encountered episode after episode in Keith Richard’s tales of serial baptisms of fire, I felt engaged all over again with the same monsters over and over again, undergoing the same frustrations, the same menaces, the same occasional homicidal urges, combat weariness and energy surges. Different disciplines but identical saboteurs: identical cult creatures from covens of corruption. Thrill, but also therapy, relishing the eyeballing encounters, acknowledging to myself a frankly vindictive pleasure that this brutal reckoning comes from a distinct outsider. In any nation that is plagued by a bloated, collective ego, it is essential that the balloon of self-regarding be periodically lanced by the scalpel of outsider perception especially where cauterized in the flames of searing, personal experience.

Enough of that biographical digression. We must not abandon the theme of the expatriate persona just yet – as a study in its own right, and as a leit-motif of this no-holds-barred business odyssey – NEVER QUITE AN INSIDER. That very title provokes a closer looks at a condition that we tend to take for granted, albeit an ambiguity in itself. It presents in advance a creature of liminal existence who must however take himself or herself out of that limbo from which, paradoxically, he has to function, get to know, and be known by, people, and forge strategies for professional productivity and sometimes even survival.

This psychological fit of that title is the basis for all manner of interactions, and no matter the nature of the profession – from the pastoral and educational to the technological, from the academic to the commercial. It straddles the desk-bound to the gritty, hands-on and energy intensive, and sometimes even dangerous enterprises. And yet, applicable to whatever field of endeavour: never quite an insider? Well, accurate enough, but also never quite an outsider, either. Hovering as an in-between often provides unusual insights, no matter how controversial. The expatriate mission – whatever it is: is to edge his way inside even while left outside in the rain, to become a part of, a student of, entangled with, his or her peopled field of operations – some, evidently, much more deeply than others.

And so, in this case, we find ourselves in the business of ministering to tastes that you and I sometimes flaunt as if were born to them, or cultivated on our own, even before we had knowledge of their existence. That of course is a fallacy. The ’business’ in this narrative explodes that illusion, since that business not merely fulfils, but fabricates, taste. I find the process fascinating. We confidently discriminate between such – acquired – tastes! We pass judgment. We even become fierce partisans, even addicts of one brand or another of the same commodity, blithely unconscious of the wily processes and manipulative labour of outsiders, trying out variations, doing what they call “customer survey or research” etc. We remain totally unconscious of – or indifferent to – the hard-headed decisions that go into such partisanship, the experimentations, rivalries, cut throat one-upmanship and even espionage operations. We have been had! Take this speaker’s word for it, after reading Keith’s book, even your favourite brand will never taste quite the innocent tipple it was. I mean, it has become complicated by insider knowledge. That doesn’t mean that it will churn your stomach or enhance its flavour on your taste buds – it will simply have become a far more interesting commodity that only happens to be beer – or stout or whichever thirst quencher. It applies equally to even – soap. Creativity and imagination placed the service of the commercial and mundane. When I was in secondary boarding school, we were given a weekly ration of essential commodities – these included a bar of soap. I recall that brand – Key soap. It has always proved impossible for me to encounter that yellowish bar either in its full-length majesty or cut in squares, even without its factory smell – without an evocation of the educational rites of passage. Now it has also taken on a vivid dimension of history and a violent one at that!

Pity, one cannot tackle all the issues in this multi-faceted book, one that veers from absurdities to severe, testing, and challenging, throws one headlong into deadly zones of scheming, involves blackmail, back stabbing opportunism, loyalties and betrayals. A compendium of ‘Total Combat’ that includes fetish warfare, ethnic and micro-ethnic wars of narrow interests. The world of presentation, packaging and ruthless promotion that lie behind those suave boardroom manners take on a sinister aspect. I mean, some of us have been there, also on business, albeit of a different calling. Don’t forget that there is that redeeming aspect of business, even of the seamiest kind, that is known as corporate social responsibility, the adoption of ‘good causes’ etc. etc. – which is where you and I come in.’