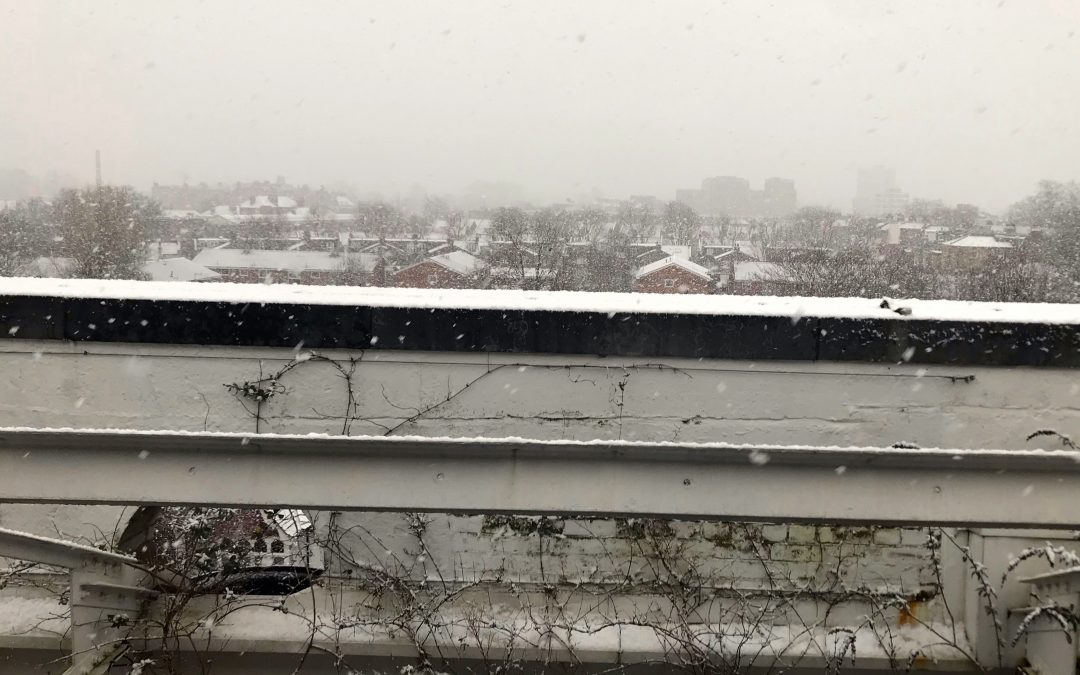 “A cold Ravenscourt Park was calling one day
Though the rain coldly poured down
I gazed at the bacon, as it greasily lay
On its roll, white, crusty not brown.
My memory took me to much warmer days
Of safaris not a West London glade,
Of a hippopotamus, no ignoramus
who sang me this sweet serenade

Mud, mud, glorious mud
Nothing quite like it for cooling the blood
So follow me, follow
Down to the hollow
And there let us wallow in glorious mud”

With apologies to Flanders and Swann

(and drunken sing songs over the years)

This rain and snow is hardly bloody helpful is it? A month on from my Hip Replacement and I am beginning to get those pangs of guilt from not getting out for as much walking as I should. There’s only so many walking up and down the stairs or balancing on one-leg exercises that you can do without going even pottier than Covid Lock Down is making me already. Over the last week the view from my balcony looking east is either snowy slate grey or dreary damp drizzle. Hardly encouraging me to spend half an hour struggling with my ‘Sock-Aid For The Elderly’. Socks are the final humiliating hurdle for the hip-impaired and it is far too cold for me to do the trendy shoes with no socks thing. What on earth makes an over 40 year old male think he looks anything but ridiculous in this weather with pale blue ankles? I can kind of see why sixteen years old girls are compelled to go out in bare legs and mini skirts on a January (non-Covid) Saturday night but surely there comes an age when the avoidance of hypothermia or chilblains becomes a key factor in clothing selection. Still, there are enough of those ‘no longer quite as cool as they used to be’ sights on the High Street to suggest that those Dubai based influencers really do have an impact. Or maybe they delude themselves that they could still swing it as a Love Island contestant? However, in my ‘Physio-by-Zoom’ real world, the message is clear: I need to be out there putting crutch on pavement and getting some proper exercise. *

There is another reason for my need to put arse into gear. There is only so much stimulation a blogger can get from introspection or recourse to the several small screens available to the modern isolationist. Someone told me this week my blogs were getting grumpier. Doh! It is hardly surprising is it? There is little cheerful stimulus to be had from TV or laptop and the repetition of Tik Tok and memes on my phone soon becomes an irritant. Few actually cause a genuine chuckle yet they remain weirdly addictive. I need to be out there like a W4 Chris Packham in the wild open spaces of Turnham Green Terrace in a lime green anorak, with the wind in my hair watching the migratory herds of white vans parked on double yellow lines for my inspiration. I need to inject something, anything, from away from the banal into my everyday life. Aside from the blogging, I find myself becoming a highly boring Zoom based conversationalist. After the usual “Keith, you’re on mute” routine you try to inject some bonhomie with a chirpy: “So, guys. Any news? What you been up to?” Only to be met with a pause and “I had a Waitrose delivery last week”. ** It is hard to say anything different than last week’s call. My recommendation for my own age group is to try and have at least one person on the call that is still actually working for a living. You know, just to vary the conversation. Even if he or she is working from home it means they have contact with the outside world. Actually, to be fair to those I am still zooming with, these calls help me maintain some social interaction whereas I note that many of the younger generation seem to have just given up on them completely. Having a set of zoom mates willing to at least pretend to listen to my regular rants is a major benefit for which I give thanks.

Anyway, despite my lack of natural enthusiasm, my sense of adventure and a pair of stretchy socks prevailed and I have actually made it out a couple of times over the last few days. As an aide to motivation, a kind of mental Boot-to Bottom, I prepare by picturing myself as Eeyore with Pooh dangling a carrot by a string from a stick. Except, instead of a carrot, my mental Pooh meditation, feet up on my couch while humming my mantra, visualises more sophisticatedly dangled incentives or rewards, for braving the elements. Pre-Covid, that was easy: a pint at The Raven. These days I have to be more imaginative. It could be a piece of the carrot cake and a beaming smile from the ladies in Parle Pantry or a ridiculously expensive brown wholemeal sourdough loaf from the nirvana of over-priced Deli treats at Bayley and Sage. That is, of course, if I head west. On Friday, as my weather App predicted a two-hour gap in the rain I decided to head east to Ravenscourt Park. There are sweetmeat opportunities in that direction too, including several excellent take-away coffee emporia, but there is one obvious winner. So eventually, I was to be found, posterior on park bench, munching on one of Ali’s bacon rolls from The Ritz Café.

I am an old school devotee of the classic bacon roll and have been known by some for my twenty-minute rant about the demise of ‘The Crusty Roll’ *** I do engage with my sons on their quest for the veggie holy grail, the vegan bacon that actually tastes and smells like proper bacon but some things have their limit. There are a couple of brands that are nearly there but they tend to either taste or smell like the real thing but not both. When someone cracks the duel boost to my endorphins they will have a winner on their hands. But not yet. 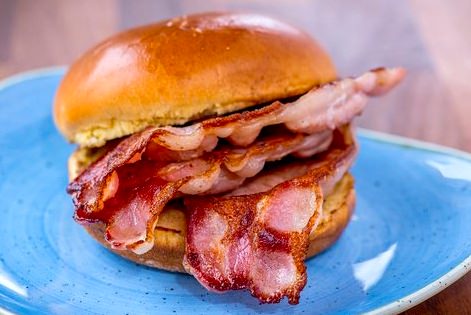 Not actually one from the Ritz. I should have taken a picture of the actual one. the bacon here is perfect but its not clear in this shot if that is a proper crusty roll – it may be (heaven forbid) a brioche which would be an aberration. It makes the point though!

So, this week’s blog starts and ends with a comment on how unhelpful the weather is to my motivation. The closing rain reference is to say that Ravenscourt Park was so wet (and it rained even more heavily Friday evening and Saturday so must have been a mud bath by Sunday) it was clearly scaring other folks off too as it was pretty much as quiet as I have seen it since the onset of Covid. Most of the benches had deep puddles in front of them and I would estimate a third of the grass was under water. In my rather poor iPhone photo you can just about make out a sizeable flock of seagulls bobbing about in the distance so deep was the flooding in that part of the park. However, this did not deter me from my few moments of reverie as I enjoyed my bacon roll. The fat was crispy and there was that flavour with a touch of crunch that comes from a proper ‘caff’ griddle. Ok, when it is warmer I will try to conjure up more healthy treats but I have a funny feeling that with more cold weather forecast a steaming bag of chips might feature in my next motivational visualisation. 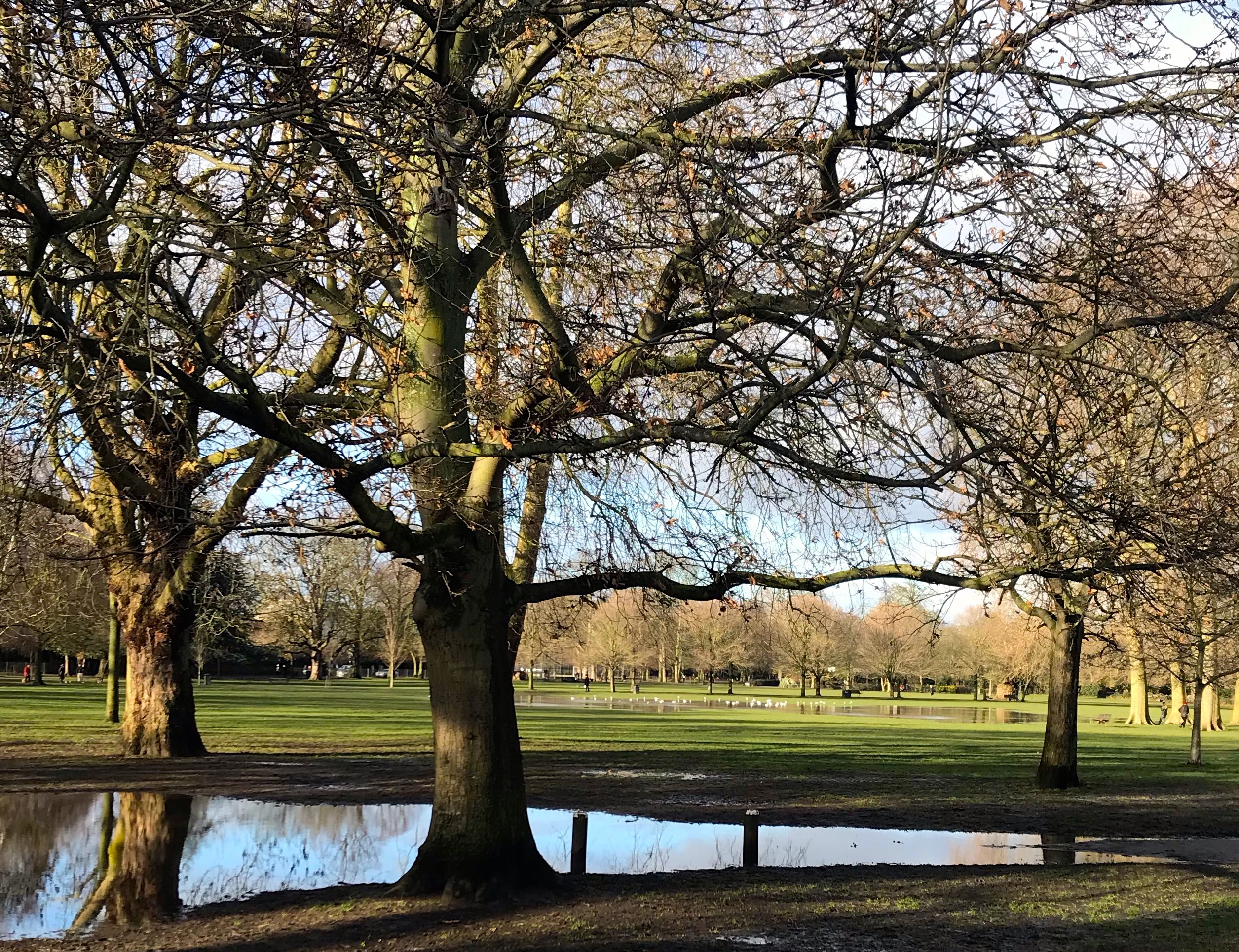 Damp and getting damper. My view from my bench, normally no water in sight.

As I leave you there is a serious point to my self-mockery that aligns with advice given concerning mental health in these trying times.. Getting out from those four walls for any kind of walk is a critical coping mechanism for surviving this winter’s version of Lock Down. Self-bribery is allowed. Treat yourself. You can lose those calories when the sun comes out so if the promise of a bar of chocolate or whatever takes your fancy gets you out, go for it. See you on the park bench. You can sit one end and I will sit the other and mine’s a Flat White.

Today’s musical closure is totally random. The lyrics just kept popping into my mind – for obvious reasons. My favourite version of this song was actually the edgier Vanilla Fudge but for pure class this is timeless. Written in 1967 (the single came out in ’68) by the legendary Holland, Dozier, Holland triumvirate the refrain is said to have been based on a morse code signal used on news assignments as heard by Lamont Dozier. The clip is from a Spanish TV show apparently and some of Diana’s miming is a bit sloppy but I might try out some of her moves as part of my Physio. I wonder whether The Supremes were physically in Spain for the show. Spain was still very much in the grip of the Franco Regime at that time. Racist and highly traditionalist the shot of Spanish fashionistas would be very much in contrast to the lot of the rural poor of the period.  I just think this makes the clip even more interesting though the fabulous music and the grace of Diana Ross, Mary Wilson and Cindy Birdsong is enough.

* That is using my walking aid, in case you ask. My legs have not got shorter.

** Don’t knock it – that’s how I get my stock of Timothy Taylor’s Landlord.

A version of this blog has previously appeared on Chiswick Calendar.