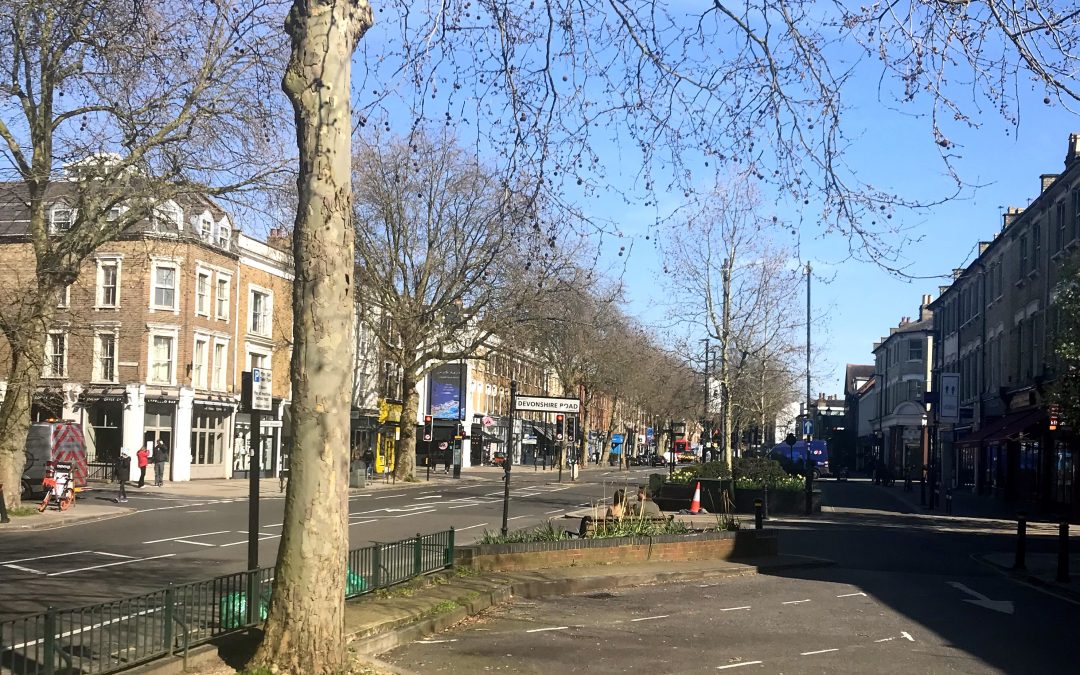 So, like most of you I am stuck at home – or at least we are supposed to be – since BoJo’s announcement of a semi-lock down yesterday evening. Or, if you are a Nigerian reader currently in Nigeria, you will likely be learning about the whole social distancing phenomena and wonder how you can apply it to a ‘face me, face you’ society (though probably not from your local pastor or iman – more rants about them later). If you are reading this from my sister Anne’s community around La Herradura in Spanish Andalucía this may also provide you with some balance away from the more sensationalist British media. I do not want to utter those words * because I have so many things I could and should be doing but, as is all too often the case, replacement activity is far too distracting and, yes, blogging counts as a replacement activity.

Even so, this is an interesting and, I guess, historically and social-behaviourally (is that a thing?) important time and worth documenting (along with the millions already doing it). This will be the record of my time here in Chiswick, West London: how I cope and what I see round about me. For the record I am a 66 year old male and since yesterday afternoon living alone. George, my 26 year old son, was with me but as of yesterday is staying with his Mother, Pauline. That makes sense as he can continue with his University projects while helping out in her garden or walking the dogs – Fortnum, Bentley and Willow. Oldest son Tom is living and working down in Bristol. I am a social animal so like so many of us – you – it is going to be interesting to see how we cope with social distancing, solitude, maybe loneliness, in emotional, psychological as well as physical terms. My normal day would be to leave the flat, just off Chiswick High Rd, at least twice a day, ostensibly to do daily shopping but inevitably to stop in one of my regular cafés/coffee shops either on my own or to meet up with the many friends that live locally. In the evening the walk would often end up in my local boozer, The Raven by Stamford Brook tube. I might take a book and sit quietly on my own to read or I might equally stay at the bar and chat with one of the fellow regulars I have got to know. Reading quietly alone in my favourite café or pub is still a social activity because I am surrounded, can observe and have the choice to engage with the people around me. Clearly, all that has now changed! Nevertheless, current guidelines are that we are allowed to walk out for necessary shopping and to take exercise and while that is still possible – because the shops are still open, the regulations still allow it and I am still free of symptoms – I intend to utilize that option – as I did today.

Up until BoJo’s announcement and despite his repeated ‘requests’ and ‘soft warnings’ Chiswick had been recognisable as itself. Clearly quieter than normal with pubs, cafes and restaurants closed for sitting in but mostly offering deliveries and take-aways but nevertheless busy enough to make physical distancing tricky. For example, the queues in some shops were standing a couple of metres apart but others were too crowded or badly organised. Today (Tuesday) I popped out around 1 pm as I wanted to buy bread and post a book. ( A Swedish PhD student has asked me for his studies!) There were very few people around, visibly less than the weekend. The pharmacy where last week I queued for 30 minutes was completely empty. Most non- essential shops were shut and had signs of varying quality and clarity taped to the inside of their doors. Obviously the many High Road Cafes were shut though some had tables outside selling their wares for carrying away and others had notices on how to order take-aways and whether they did direct deliveries. There were a few Deliveroo riders lolling around on their bikes in the weak sunshine though I imagine they would be busy later in the evening. It was a somehow ‘discombobulating’ experience to see the popular trendy places such as High Road House, normally always busy, so eerily silent. The few walkers were pretty focused on keeping a couple of metres apart as they passed and quite a few had masks.

So, I had two chores and they exhibited the best and worst of how traders are reacting to the challenges. As I approached the Post Office (on Heathfield Terrace) I could see a couple of people in front of a clearly shut door, straining to make sense of a square of white paper crookedly stuck on it. I kept my social distance until I too could approach the door and attempt to read, let alone understand the scruffy and tiny notice. Despite the website saying the Post Office was open with normal hours the notice was clearly saying it would only be open part-time. But what hours? I leave you to see if you can read it? Apart from being in a twelve if not ten point font the times have been badly scribbled over so as to be illegible. While I was there a pensioner came over and was visibly distressed and held her face just a few inches from the paper as she tried to read, let alone understand it. When I explained and offered to help she wandered off muttering. Many of the elderly still collect their pensions and allowances in cash from this Post Office and that notice was thoughtless and unhelpful. I have no problem with them reducing hours or taking steps to protect their staff but they need to communicate clearly. I already have a low opinion of the service from this Post Office and this confirmed it but several in the vicinity have now closed and my only alternative is down into Hammersmith’s King St. 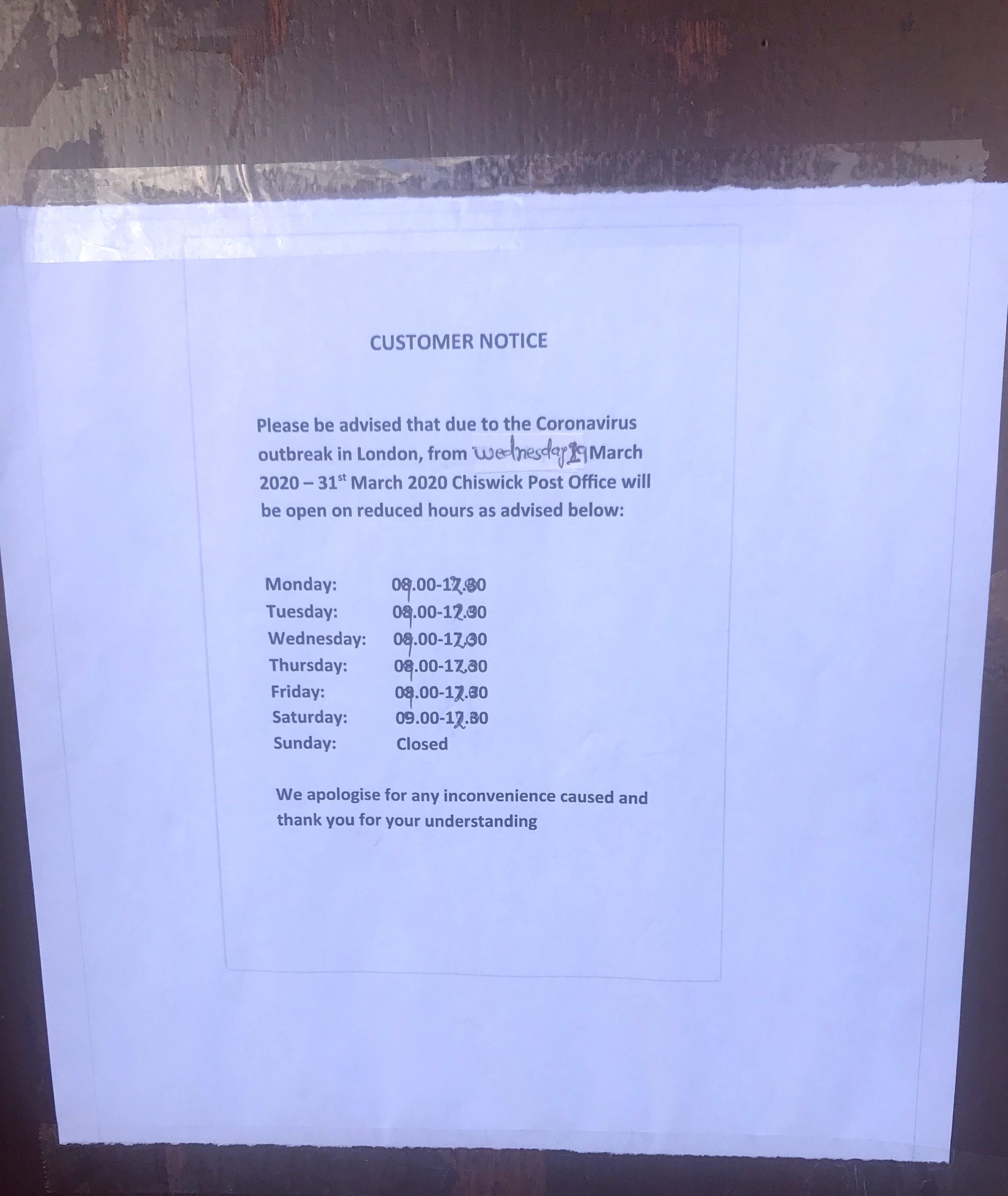 The scrappy note outside the Post Office – can you read their opening times ?

At the other end of the efficiency scale was my experience at Source – the slightly hippy, plastic free, eco shop where I re-fill various containers of product as diverse as porridge oats, olive oil and washing up liquid. This trip was for dried nettle leaves (a pleasant tea and a herbal anti-hay fever remedy – with thanks to Dhill for the recommendation) and my evening treat (if I am not allowed down the pub I need a reward) of broken slabs of various dark chocolate (in this case with a hint of sea salt). In contrast to the Post Office, Source had their act together. A sign saying they were allowing 5 people at a time in the shop with a member of staff enforcing a ‘one in, one out’ system with a squirt of hand sanitizer as you go in. That’s the way to do it! I felt like they knew what they were doing and actually gave a shit about their staff (and their customers) so credit to them.

One of the themes of this blog will be that we all need to remember those traders and services who did give a shit during the crisis and give them our patronage afterwards. Those that are not looking after their staff, that price gouge and take advantage should be boycotted thereafter.

So, I think that is enough for my first ‘Corona Blog’ – I suspect this will be a long season, assuming I have the energy and someone somewhere actually reads it.  Over the next few – days, weeks – god I hope not months – I will try to balance the external – what is happening here in West 4, how are my friends in Spain and Nigeria coping – along with my internal journey.  How am i coping and what am i doing to stay sane? I might even share some of my poems if things get really bad.

Please share your experiences too  – send them to me by email keith@outsiderinside.co.uk – or post in the comments section