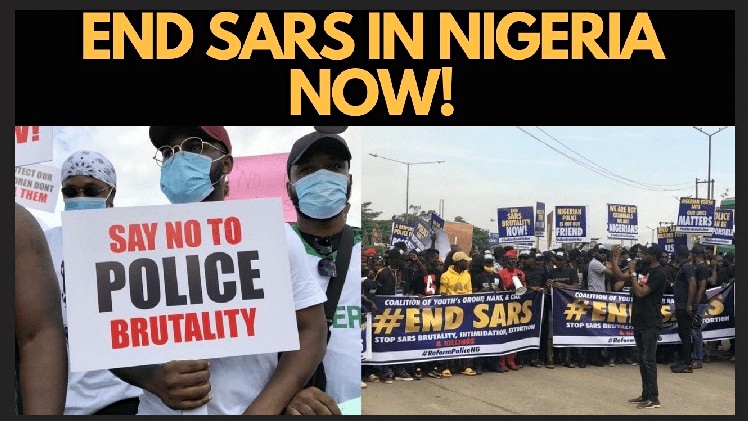 This Blog is specifically to stand in solidarity with the courageous youths who have been out on the streets across Nigeria protesting against police brutality.

Who cares About Nigeria?

Given there is almost nothing about these momentous events in western mainstream media I thought I would also provide some background to these protests and their place in the story of the response to colonial and post-colonial oppression. Nigeria and Nigerians tend to get a bad press and what there is tends to be negative and superficial. If these protests were in Istanbul, Cairo or even Johannesburg there would be some footage on the evening news and some sympathy for the legitimacy of the cause. The riots in Thailand and Hong Kong do get some airtime if not, as Brexit and Covid obsessed as we are, as much as they should, but what is happening in Africa’s largest, most densely populated country is equally, highly significant.

Social media videos and picture show youths taking action in several cities right across the country since the #EndSARS hashtag protests went viral about ten days ago. While footage of two SARS policemen dragging two youths into the street and shooting one was a specific trigger the real reasons for the protests are long seated and deep rooted. In part one of this Blog I will put them in context and in part two try to consider the protests themselves with the caveat that I am relying on unverifiable social media posts and some third party witness accounts via friends. The situation is also escalating almost hourly.

A History of the Suppression of Basic Human Rights

How far do you go back to describe state sponsored coercion and repression in Nigeria – indeed almost anywhere in Africa? Historical study of pre-colonial history of the kind that is so seldom available without real research shows that while there was inevitably warfare, domestic servitude and cruelty it was a fraction of the scale that exploded when Europeans turned up. Even before full colonialisation the communal and economic structures of centuries old societies were severely disrupted by the new levels of aggression brought by European traders – their commercial interests backed up by the better weapon technology developed by the constant conflict that Europe specialised in. The slave trade and ‘plantation agriculture by force’, including rubber, palm oil and cocoa, had already de-populated whole areas and destroyed long standing societal arrangements before the ‘Scramble for Africa’ formalised the arbitrary colonial structures that still define the political geography of the entire continent.

In British Colonies like Nigeria, the technique for controlling massive populations with just a small number of white officer/administrators was the ‘Indirect Rule’ system. This, in the shortest possible summary, was to ‘divide and rule’ by creating caste-like systems and an acquiescent elite (sometimes by hi-jacking existing structures and sometimes by creating their own). These elites would be rewarded by status and the opportunity for personal wealth if they collected British taxes, provided the overseeing classes and the low level military muscle required by a colonial administration to keep control over a conquered people. A belief that independence put an end to the colonial system is a naive and superficial one. There was no colonial power in Africa that did not attempt to ensure that they maintained influence and even some form of control when they ‘granted’ independence and ‘left’. Any African leaders that displayed genuine nonalignment and sought to achieve the objective best for their new nation was murdered or overthrown either directly by agents of the former colonial masters or by western sponsored members of their own elite who saw the prospect of their own power being eroded. Kwame Nkrumah (Ghana), Patrice Lumumba (Congo) and Thomas Sankara (Burkina Faso) are probably the three most obvious examples. In Nigeria there is clear evidence that the pre-election census and the pre-independence election itself was manipulated to ensure the Northern hegemony was maintained and a western facing government was in control. The constitutional and economic structures put in place by the British remained in situ and even later constitutions favoured the status quo.

The Response – Then and Now

So what protest, back-lash or revolt was there against what to ordinary Nigerians was a continuation of the elite centred system that they hoped they would have see the back of after 1st of October 1960 when the green and white Nigerian flag replaced the Union Jack? During the colonial era there had been regional actions such as the (so called) Aba Women’s Riots in 1929 and Funmilayo Ransome-Kuti’s ‘Abeokuta’s Women’s Union’ protests in 1949 that achieved limited local concessions. There was as a General Strike in 1945, inspired by the important Railway Union that had some success in obtaining limited improvements in working conditions. However, any serious threat to the authorities was put down brutally: such as the 1949 massacre of 21 striking miners at the Iva Valley Coal mine in Enugu by armed police under the orders of a British officer. After independence the struggle for control was broadly between different members of the existing political classes. This mostly continues today as so much of Nigerian politics is still dominated by the tribal ‘divide and rule’ structure left by the British. The Nigerian Civil War (also known as The Biafran War) was, in a way, an attempt to break out from that structure but can also be classed as a conflict between the same elites for the control of resources.

Nigerians have a reputation for being noisy and often argumentative but the reality is that in political terms, especially given what they have been through, they are submissive to authority. Major activists such as Fela Kuti bemoaned the passive attitude of their compatriots. Perhaps it is fairer to describe their response as subversive because direct protest could too often be fatal. The assassination by parcel bomb of journalist Dele Giwa by the Babangida regime was a case in point. The population’s hopes have been raised and dashed by successive military coups and by promises of change in the most recent ‘democratic’ constitutional structure: first by Obasanjo who wasted the opportunity he was given, then by the short lived Yar-Adua, the inept Goodluck Jonathan and now the geriatric Muhammadu Buhari presidencies. Every civilian regime since the return to democracy in 1999 has been fronted by an ex-soldier, (except Jonathan) each growing more corrupt and oppressive as time progresses. What every government has had in common is a violent and corrupt police force, supplemented by a paramilitary wing and backed up by the threat of the army. It is hardly surprising that the general response by ordinary people to constant political abuses, corruption and general government ineptitude has been to keep their head down and concentrate on ‘getting my own’: basically surviving day to day. The innate, often religiously inspired, optimism of many who persuade themselves that a miracle could happen any day soon prevents them from serious challenge. The middle-class, small for a country of Nigeria’s 200 million population, live in small enclaves in just half a dozen cities but are generally to be found on the island suburbs of the sprawling mega-city that is Lagos. The majority of the 20 million inhabitants of the city live in densely populated areas on the mainland or the original Lagos Island, often in ghetto like conditions. It is the militarised police system that just about keeps the lid on this teeming society.

Over the years I have been visiting or living there The Nigerian Police Force ‘NPF’ has been a constant presence. There are and have always been check points, choke points and extortion points whether on city streets or on the pot-hole filled highways between cities. Even as an entitled and protected ‘oyinbo’ there is always a frisson of anxiety as one approaches a roadblock, especially at night. The routine is to have one’s driver (expatriates and the middle class rarely drive themselves) slow down and switch on the internal light. Usually an exchange of pleasantries is enough but the new arrivals (‘fresh fish’) or the nervous will be intimidated into handing over some money. Maltreatment of an expatriate is rare but happens occasionally if those police are drunk or doped up but for ordinary Nigerians violence is commonplace. Bus conductors, taxi drivers, okadas (motorbike taxis), beggars, bukkas and street food vendors, traders, small businesses and local bars can not exist without a constant drip drip drip of petty bribes, or ‘dash’, to the police. There is a hierarchy of punishment for the failure to comply. For the taxi or bus it might be a tyre being burst or a wing mirror smashed all the way to the vehicle being impounded and the driver being beaten. Women traders or ‘Mama Puts’ (street side food stands) are not exempt from a slap or a rifle butt in the face or worse. Witnessing these routine atrocities is utterly commonplace and in the second part of this piece I will share some of my own experiences just to illustrate the truth of this protest. 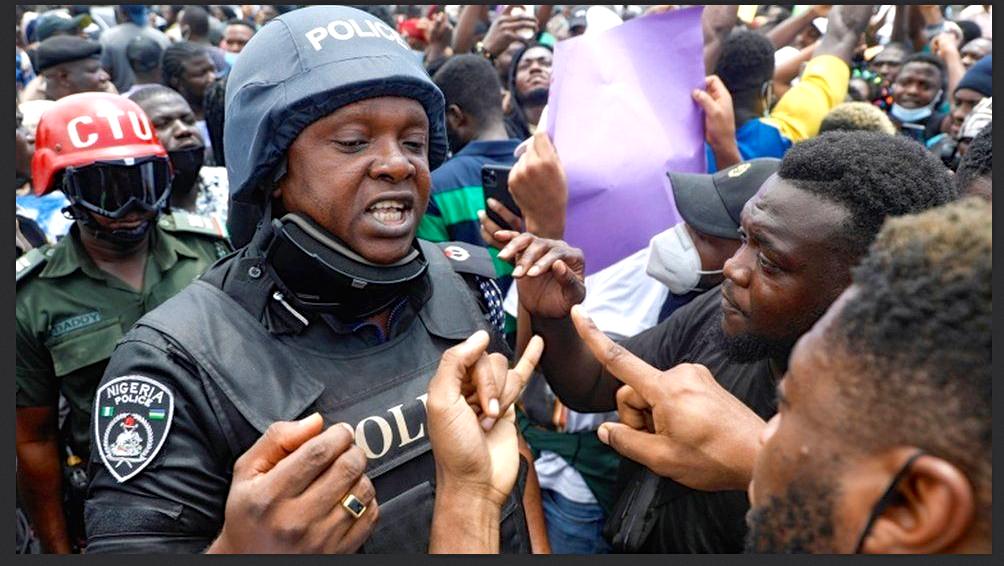 Now, the ordinary police are one thing but the more heavily armed paramilitary special units are another. The largest of these units, the ‘mobile policemen’ or MOPOL for short were set up in 1959 as a ‘strike force’ that could be deployed swiftly when the ordinary police were unable to maintain civil control. By the ‘80’s they built a reputation for arrogance and being above any semblance of Rule of Law, becoming so notorious for their ‘shoot first’ policy that they quickly became known as ‘Kill and Go’. Their violent status was enhanced during the repression of protests (that much later morphed into militancy) in Ogoniland and other parts of the Niger Delta during the Abacha era (1993 to 1998). In 2000 their viciousness culminated in the killing of 20 unarmed civilians during a drunken shooting spree in Suleja, Niger State. Over the last few years a number of investigations and ‘judicial reviews’, inspired as much my external pressure such as Human Rights watch and Amnesty International, as by local protests have seen cosmetic changes. In response the MOPOL has morphed into SARS. Ostensibly a dedicated ‘Special Anti Robbery Squad’ the unit has taken on the role of enforcer and extrajudicial murder squad previously undertaken by the ‘Kill and Go’ boys. The main difference is that cameras on mobile phones, the Internet and now widespread use of Social Media make it more difficult for them to operate in the shadows. As corruption and utterly incompetent management of the economy continue and Covid related frustrations have build up it seems SARS’ public brutality has finally ignited the fuse. More of that in the next day or two.

Certainly no people in Nigeria has represented the struggle against the forces of oppression or suffered from it more than the Ransome / Anikulapo Kuti family. As is my habit I leave you with a music video that represents what I have been trying to express.  I leave you with Fela’s ‘Sorrow Tears and Blood’, an excerpt of which is included as the Epigram.  https://www.youtube.com/watch?v=F4ZUnPWxgvc