Pre-Re-Re-Confined or is it Post-Unbound? Who the fuck knows or cares anymore ‘cos we got The Blues?

Pre-Re-Re-Confined or is it Post-Unbound? Who the fuck knows or cares anymore ‘cos we got The Blues?

“It was as though we were a picture, trapped in time: this had been happening for hundreds of years, people sitting in a room, waiting for dinner, and listening to the blues.”

A Gig before Lock Down

When you see a man holding out his little finger, his ‘pinkie’, it might suggest he is either a devotee of Audrey Harrison in ‘Breakfast at Tiffany’s” or that he is a slide guitar player. It was a delight to actually attend a live gig last week and, at that, one that featured some classic slide guitar. In fact, so delighted was I that my intended short review has become this week’s blog with an excuse to share some of my favourite Blues tracks with you.

I did not really know what to expect when I went, suitably socially distanced, with some friends to the event at local pub George IV and found John O’Reilly’s pinkie in action with Nick Payne as the ‘Blues Engineers’.  Musicians like John and Nick are the unsung heroes of the UK’s music scene. These are the quality gents (and it is a male dominated group) of a certain age who have supported more well known front men/women musically and technically, as Session Musicians or ‘Sidemen’, yet who go largely unrecognised. I must have seen Nick, for example, many years ago when I used to go and see ‘The Q-Tips” (later becoming more famous as their lead singer Paul Young rose to fame) or heard him on the many songs in which he played as a session man for artists ranging from Chas & Dave to Bill Wyman’s Rhythm Kings. In John’s case as a guitar teacher to what must be a very high standard – and critically incorporating a wide variety of styles, a point that was not lost on me as I shall discuss later.

I have to admit, the only time I feel a tinge of regret at the absence of smoking in public places is at certain gigs – the type that you might have once encountered down some steps into a pall of smoke as a saxophonist (maybe even Nick) was playing a solo. The kind often called ‘speakeasies’ where you could cut the proverbial atmosphere with a knife. Actually, the back room at the George is well set out and has ambiance but the necessary table distancing, masking and early hours makes it a bit of a struggle. Having said that, in these Covid times both performers and audience are so excited to actually be at a live gig that a connection is soon made. John, as main vocalist and on guitar is the Front Man, I guess you would say, but Nick’s interventions on flute, sax and especially harmonica took each song to another level. In fact, if there was one thing I would have asked for it would have been to hear Nick play a Blues Harmonica in ‘Train Time’ in the style of Sonny ‘Hootin’ Terry with John as ‘Brownie’ McGhee. If you have ever listened to Paul Jones’ radio shows or seen him play as a duo with Dave Kelly there is a kind of stillness as he talks through the history of each of their repertoire. John and Nick also have a long catalogue of Blues and R&B but there is more of a kind of restlessness in them as if they prefer playing with their larger 4 or 5-piece version of The Blues Engineers. Their twenty-song set fairly rattled by with nearly half the songs their own material but clearly in the style of various artists.

I was delighted that on the first few songs John played a steel resonator guitar, as I am a big fan. Often incorrectly generically called ‘Dobro’, just one of the early brand names, after the Dopyera Brothers when one of them, John, left the National String Instrument Co he had helped set up in 1927 to join his family in a new venture. The resonator was particularly popular with the Delta blues musicians as they were generally louder (before the days of electric guitar). National and Dobro continued as the main manufacturers but all resonator production stopped during WWII. The rise in the Blues’ popularity in the ‘60’s saw production starting again and the Dobro brand is now owned by Gibson Guitar Corp. Many serious aficionados still play pre-war resonators especially for slide and Delta blues. The early part of the set (on the resonator) included a number of songs that reflected how much the Blues influenced musicians on both sides of the Atlantic as well as the connection with that other working class Southern music – Country. ‘Honky Tonk Woman’ (Rolling Stones), ‘Come Together’ (John Lennon) and ‘Dixie Chicken’ (Lowell George /Little Feat) all reflected Blues Engineers’ ability to flex their style.

The second half also featured songs that were made famous by later recordings. The Stones’ version of ‘Little Red Rooster’ is possibly the only ‘pure’ Blues song to have reached No 1 in the UK Charts (1964) and, in my mind, demonstrates Brian Jones’ love and technical skill for strict Blues whereas Jagger and Richards were more open to wider influences. A difference that later led to Jones’ separation, depression and early demise. (The afore mentioned ‘Honky Tonk Woman’ was written by Jagger & Richards on holiday in Brazil and has influences from that trip, just as an example). ‘Red Rooster’ is often credited to Howling Wolf and it is his version John and Nick play though Willie Dixon has the song writing credits.

The first Video I have chosen because it reflects the influence of the greats of Delta and Chicago Blues on the rise of British rock and pop in the ‘60’s. It is from a TV Show recorded in Hollywood in 1965 showing a great Jagger swagger on ‘Little Red Rooster’ (and how good a Blues band the Stones actually were) followed by Brian Jones’ obvious veneration of Howling Wolf who then performs his own 1951 track ‘How Many More Years’.   https://www.youtube.com/watch?v=CSkgdT3J1Sk

In those early days artists shared and stole each other’s work and the actual original version can be hard to pin down. Another of my favourites was Elmore James’ ‘The Sky is Cryin’’ given profile by the amazing Stevie Ray Vaughan. For some reason, possibly because he hated touring, Stevie Ray seems not as known in the UK as he should be. So, I can’t resist throwing in a version of Stevie Ray even though the one played at the gig was closer to Elmore James’ style.  Just to make the link of old and new even closer in this he is introduced by B B King, duets with Albert King and it has Blues legend Paul Butterfield on Harmonica. https://www.youtube.com/watch?v=Yj5kg_TTUrs

The set also included T-Bone Walker’s ‘Glamour Girl’ and I got a buzz when I recognised his distinctive guitar style.  Of course, finding live video performers of the greats is tricky as many were in their twilight years by the time the ‘60’s revival came around. T-Bone Walker was born in Texas in 1910 and is generally reckoned to be the earliest popular proponent of the electric guitar. Invented in around 1932 and first patented in 1935 the electric guitar was created for Jazz guitarists who wanted to be heard in big Jazz bands and T-Bone was reckoned to be the first Blues player who adopted it. B B King and Chuck Berry both acknowledged that hearing him play electric inspired them to do the same. He must also have been a showman because several people including Jimi Hendrix cite him as the man who taught them to play using their teeth. So I have gone for an audio version of the song Blues Engineers covered, ‘Glamour Girl’, because it is a great example of his playing style that John emulated so well.  https://www.youtube.com/watch?v=VoHmbwSsNp0

Even for an amateur such as I the different playing styles of many of the Blues greats are often obvious, with their own tuning and other idiosyncrasies. Funnily enough, one of the songs that went down so well with the audience that, for a distanced bunch, we even managed to build up some volume on a sing-a–long. ‘You Are My Sunshine’, one of Nick’s few vocals’, dates from 1939 and has become a bit of a cliché having been covered by artists ranging from Doris Day to Gene Vincent and is now actually the official State song of Louisiana. It is not normally one of my favourites but here the boys brought it to life.

They played several of their own songs – some of which are available on Spotify, (I think all written by John) and they finished off the evening with two. ‘Shakin’ Hands With The Blues’ is on the album of the same name albeit recorded with a full band and dates back to 2009, showing how long these guys have been kicking around. The final song, the eponymous ‘Blues Engineers’ is on the album too, and I thought was redolent of Walter Becker of Steely Dan. The audience, me included, accorded their pleasure with requests for an encore, which was the rousing and off covered Willie Dixon classic ‘You Can’t Judge a Book by Looking at the Cover’. It was fitting way to send us off, early Covid doors, into the pandemic winter of discontent with the question, ‘when will be allowed to have this much fun again?’ whispering in our ears. The answer became clear this week – not any time soon. With London hitting Tier 3 and threats of January being a post-Christmas Lock Down across the whole of the UK I may well be living off the memories of this gig for some while. 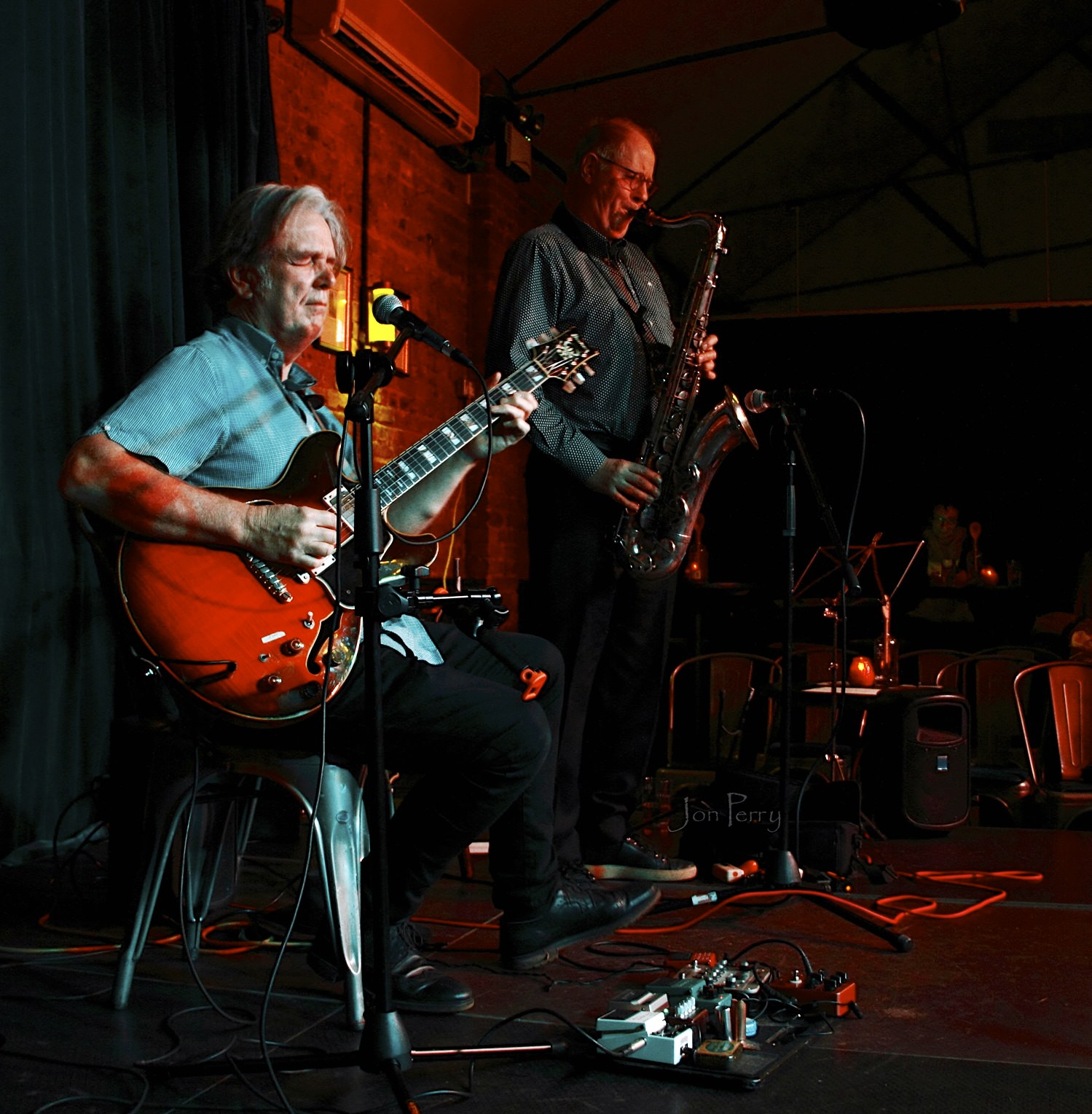 So, a strong recommendation to catch Blues Engineers either Live or to check them out on Spotify where Nick’s Sax playing that I haven’t really had space to cover in my review also comes into its own.

A version of this Blog has already appeared in Chiswick Calendar who were also the promoters of this event in conjunction with Larry Pryce. Pic Jon Perry.