So, how many were there at Saturdays’s Stop The Coup protests ?

So, how many were there at Saturdays’s Stop The Coup protests ? 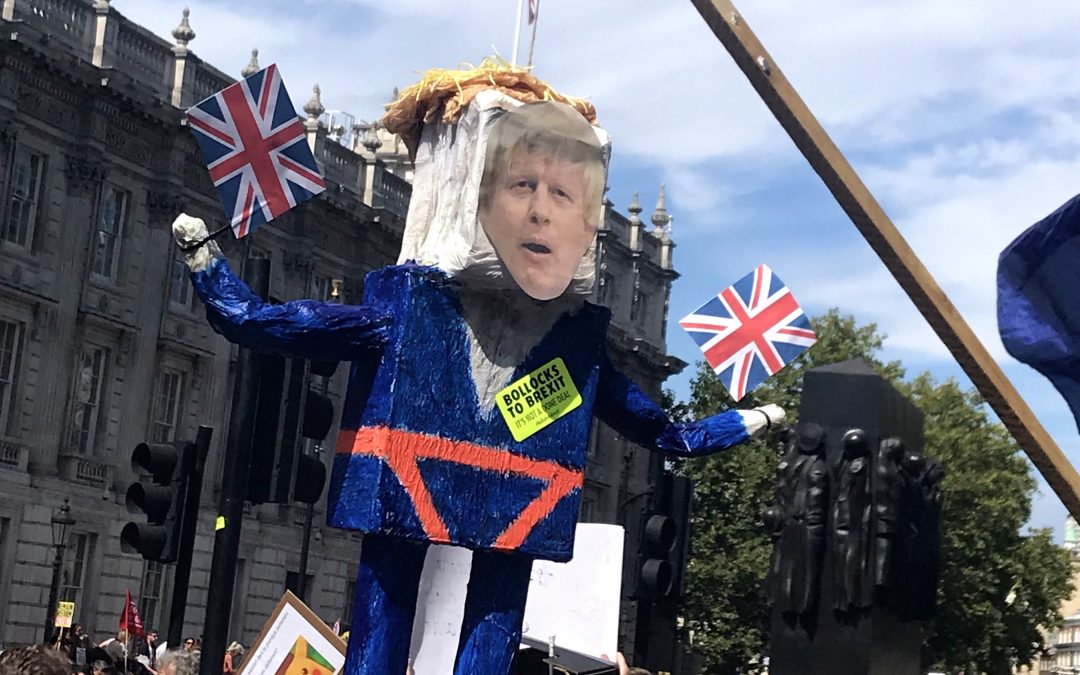 Oh No, Keith’s Blogging about Brexit !

Well, not exactly. True, yesterday, in disgust at the utter disregard for any semblance of respect for the electorate and frustration at the total disappearance of reason in our political discourse, I took to the streets in support of “StopTheCoup”. However, today’s piece is not about the rights and wrongs of Brexit and Pro-rogueing, it is about what numbers the press were reporting.

It is difficult to assess the size of crowds (as Donald Trump will attest) especially if you are in the middle of them. Nevertheless, I do have some experience of crowds as most years I attend Six-Nations Rugby at Twickenham (80,000 people), I was at U2 at Twickenham (120,000 people) not to mention various other stadium gigs and was at recent protests including Extinction Rebellion. Now, the Guardian which some of you may know I have fallen out of love with as it has declined in quality substantially over the last few years, reported 40,000 in total in London and mentioned several other cities. BBC (don’t even get me started on their coverage) quoted ‘thousands’ with no specificity and mentioned some other cities, which is the same term used by The Telegraph and Mail. The highest I could find was 100,000 quoted by Novara media (check the ‘Resources’ button for a link to their excellent site) that seems closest to the mark for me. All of the above were clearly guilty of under reporting events outside London apart from the odd comment and some coverage of Jeremy Corbyn in Glasgow though the Guardian did indicate the spread of the protests and picked a few places to comment on. However, many, many more towns across England did hold protests of variable sizes – my mate Trevor, for example, was protesting in staunchly conservative Chichester where he estimated a couple of hundred. Multiply a few hundred in small communities such as that and the numbers soon creep up.

So, the protests were called to start at 11 am and I arrived at Westminster via the district line at just after noon. At least a couple of dozen other protesters alighted there and others on the train said they would stay on until Trafalgar Sq. Basically, I joined the crowd at that end of Whitehall and squeezed my way down, stopping deliberately only to take a few pictures and for a while to listen to part of Owen Jones’ speech. 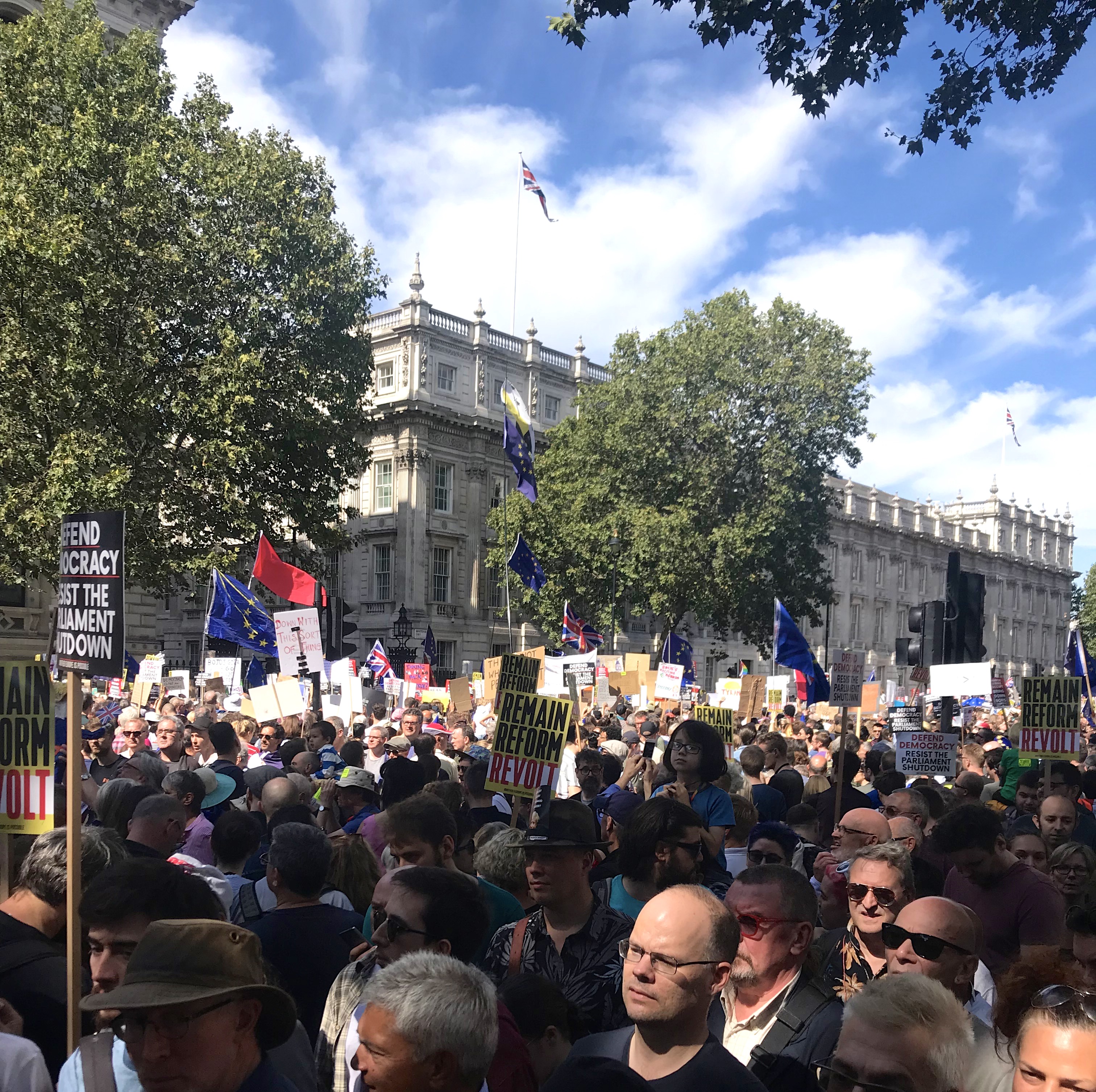 Not far from where I entered Whitehall before Downing St

It took just short of two hours. As can be seen by the photos that track my journey, the crowd was dense all the way down, which is why it took so long to walk what Wikipedia says is a journey of less than 650 metres. At some points a few people were clearly getting claustrophobic. There were families and even some with dogs that had clearly underestimated how many people were going to turn up and how intense the crush would be. Generally, people were good-natured though the pressure was causing some tension and there was a great deal of humour. Unlike some protests where one particular section of society was dominant this was a truly broad church. The protests were not organised or dominated by a particular group but seemed to just be from a shared concern about the direction of current UK politics focussed in on Johnson’s utter disregard for the intelligence of the wider British public. 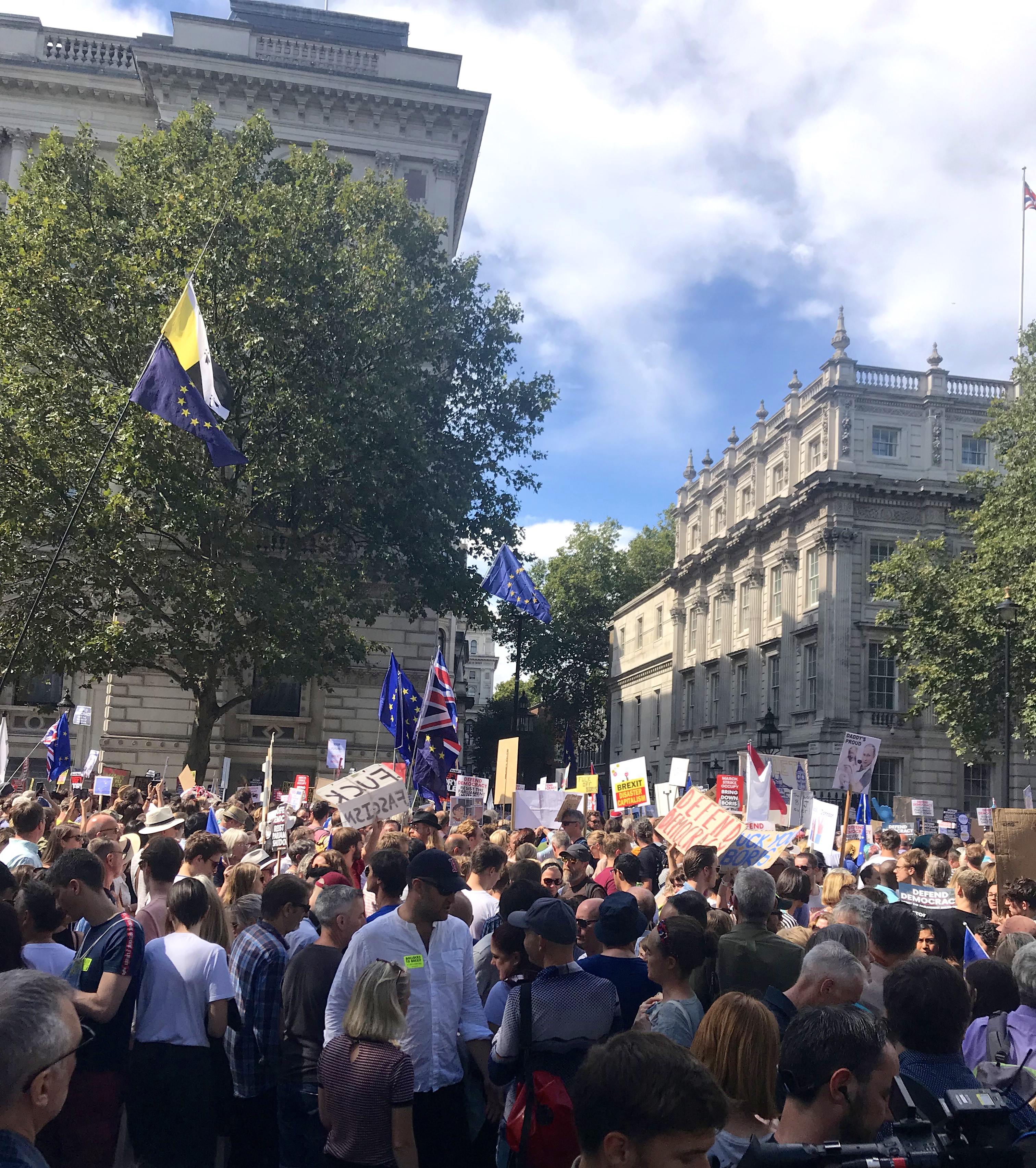 Just at the entrance to Downing St.

Once the speeches were finished the announcement was that for safety reasons it was suggested people should move in the same broad direction. 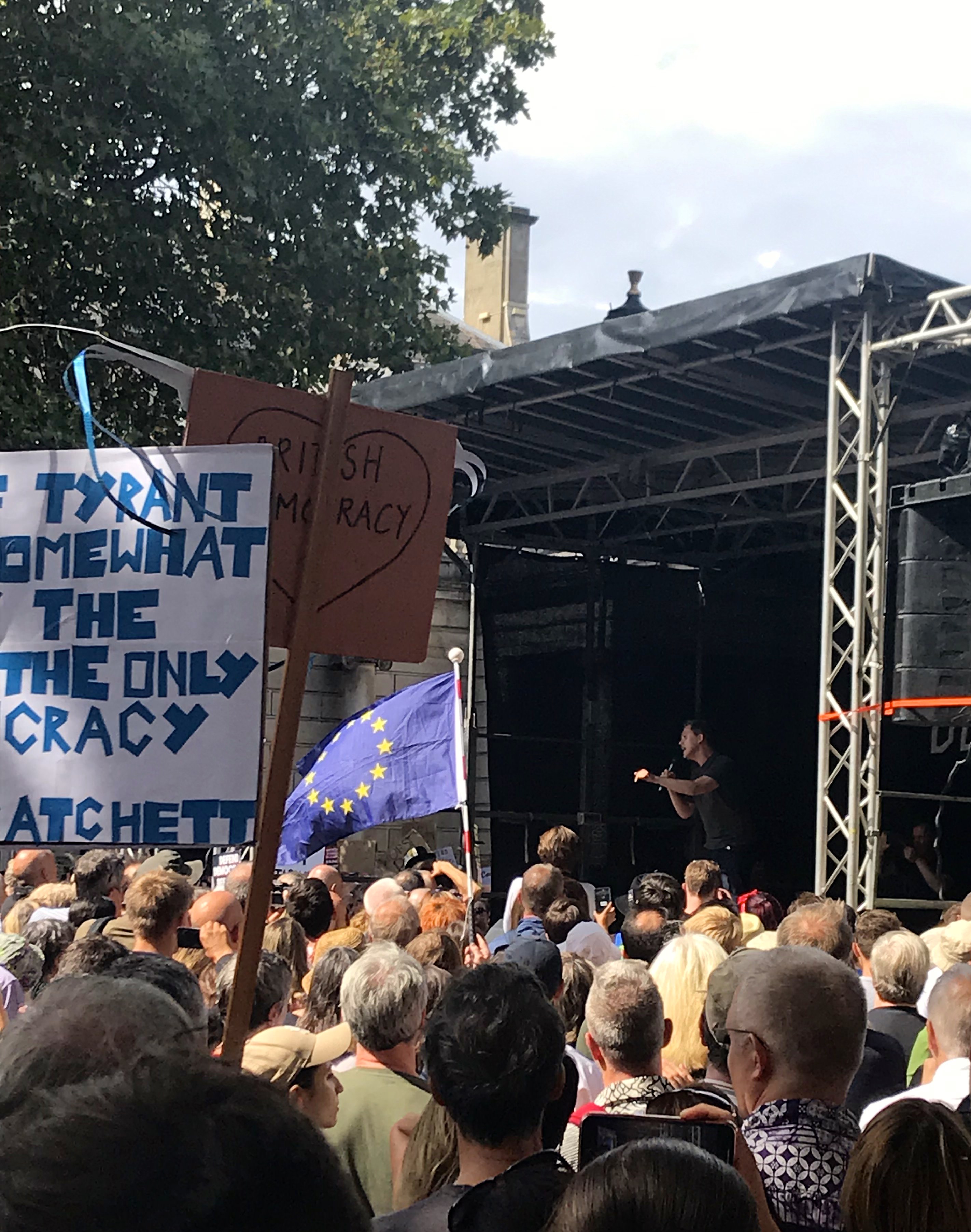 Owen Jones speaking on the stage about halfway along Whitehall

As I was already moving towards Trafalgar Sq., I was with the vanguard and paused on the corner of Whitehall Place just before Great Scotland Yard down which the police directed the lead protesters. 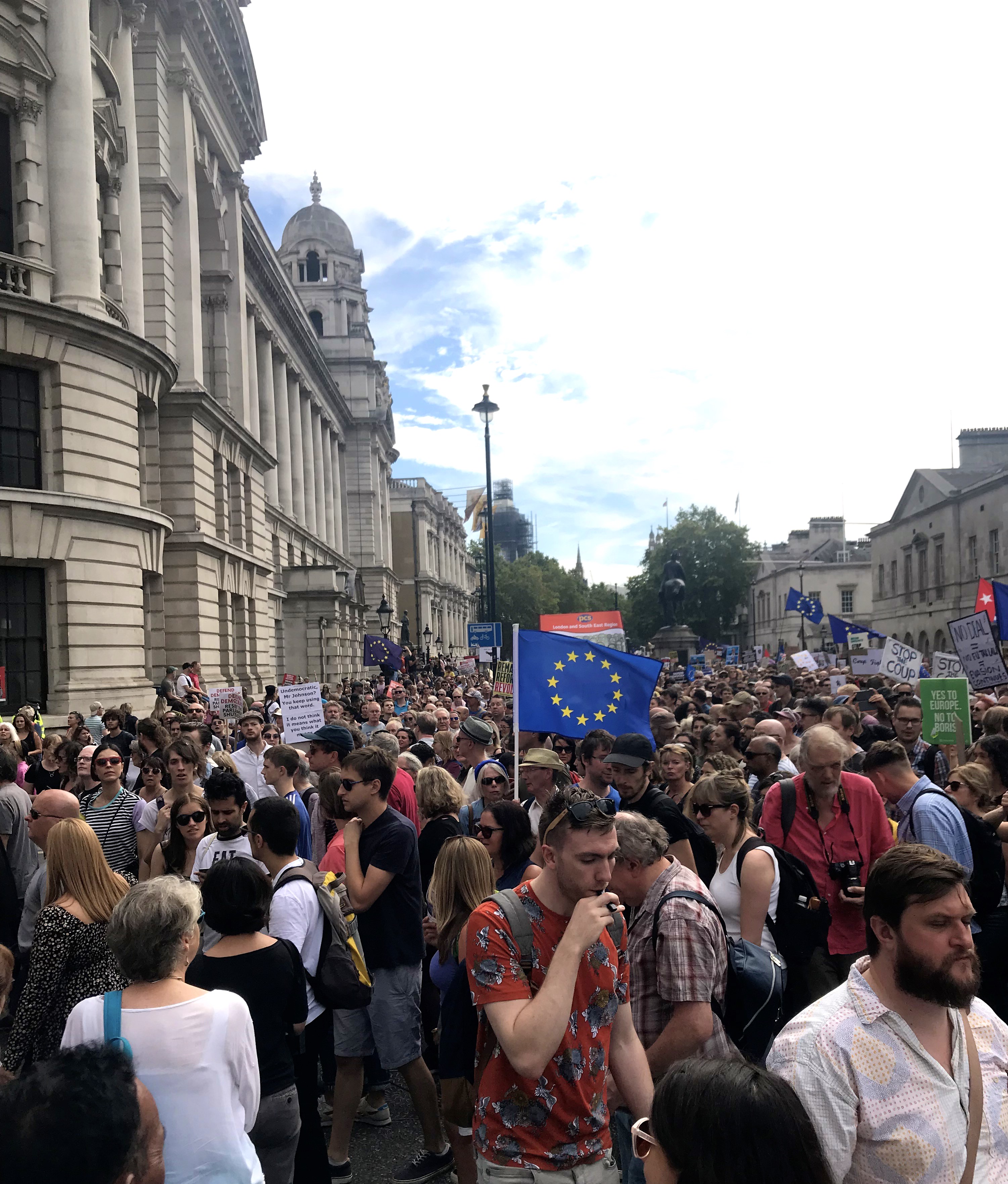 This seemed to be to ensure no confrontation with the tattooed, shaven headed right-wingers who had been drinking in the Weatherspoons pub next to Trafalgar Studios Theatre, The Lord Moon of the Mall. It now seems to be a standard practice that the usual motley collection of middle-aged ‘skinheads’ pick a pub on the potential route of the march but then get ‘bottled’ in by the police, which allows them to shout abuse behind a protective ring of constabulary. It can be a bit intimidating if you inadvertently get stuck in one of their chosen pubs though! As the crowd turned right I walked past the pub where there was some verbal jousting separated by a wall of police (who were otherwise fairly relaxed from what I could see) and paused on the corner of Whitehall and Northumberland Avenue. At first, random groups of protesters were just crossing the square towards public transport but suddenly, immediately in front of me, three women just sat down in front of the traffic. It took a fair amount of courage as for the first 3 or so minutes they were on their own with cars and a bus just two or three feet in front of them revving up and leaning on the horns but quickly other protesters joined them and very quickly Trafalgar Sq. ground to a halt.  As I left, other groups were heading off to protest outside Buckingham Palace and I saw on Social Media that others went on to block Waterloo Bridge.

So, how many were there? My experience tells me that the Guardian’s 40,000 had to be light on the total. Coming out of a Crystal Palace game, for example, at average home gate of circa 25,000, the crowd moves much speedier and disperses much quicker than this. Leaving Twickenham after a home international around 50 to 60,000 head towards Twickenham Station and the Stop The Coup crowd felt denser and was slower to progress. Remember too when assessing numbers that there were demonstrations in other parts of London and many people would have come for an hour before heading home or off to do some shopping! Certainly, the tory media, as one would expect, are well short of the numbers, and for my view this supports criticism that the BBC constantly under estimates any kind of demonstration in favour of left wing causes or climate change. In fact, I am firmly in the camp that BBC news is now utterly biased towards the establishment and deliberately understates any movement against the status quo.

I leave you to judge whose estimate of the crowd size is more accurate.

Finally, where ever there is a crowd, there is humour and I leave you with some of the more amusing images of our dear prime minister and how some 100,000 people felt about him in London on Saturday 31st of September. 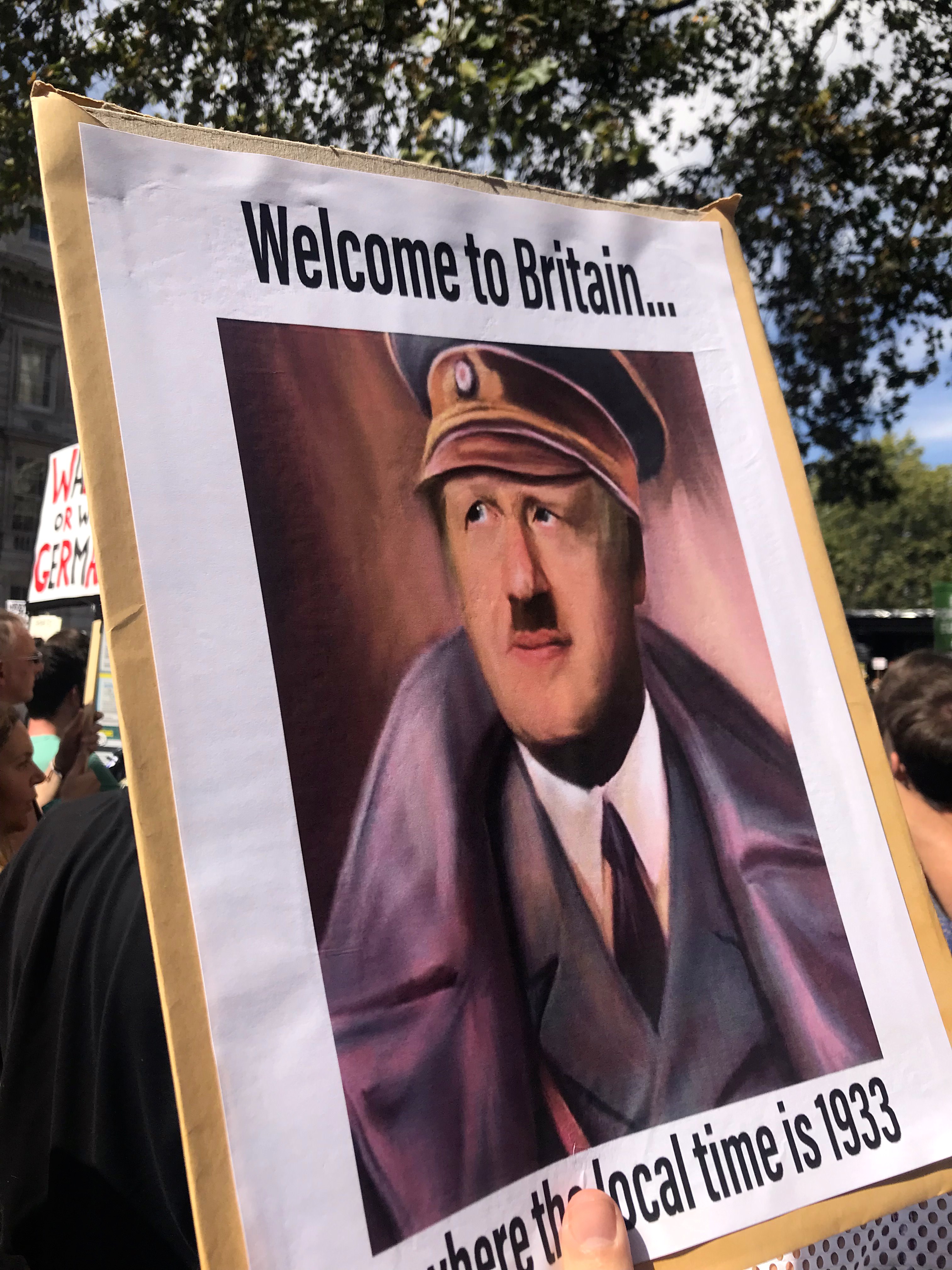 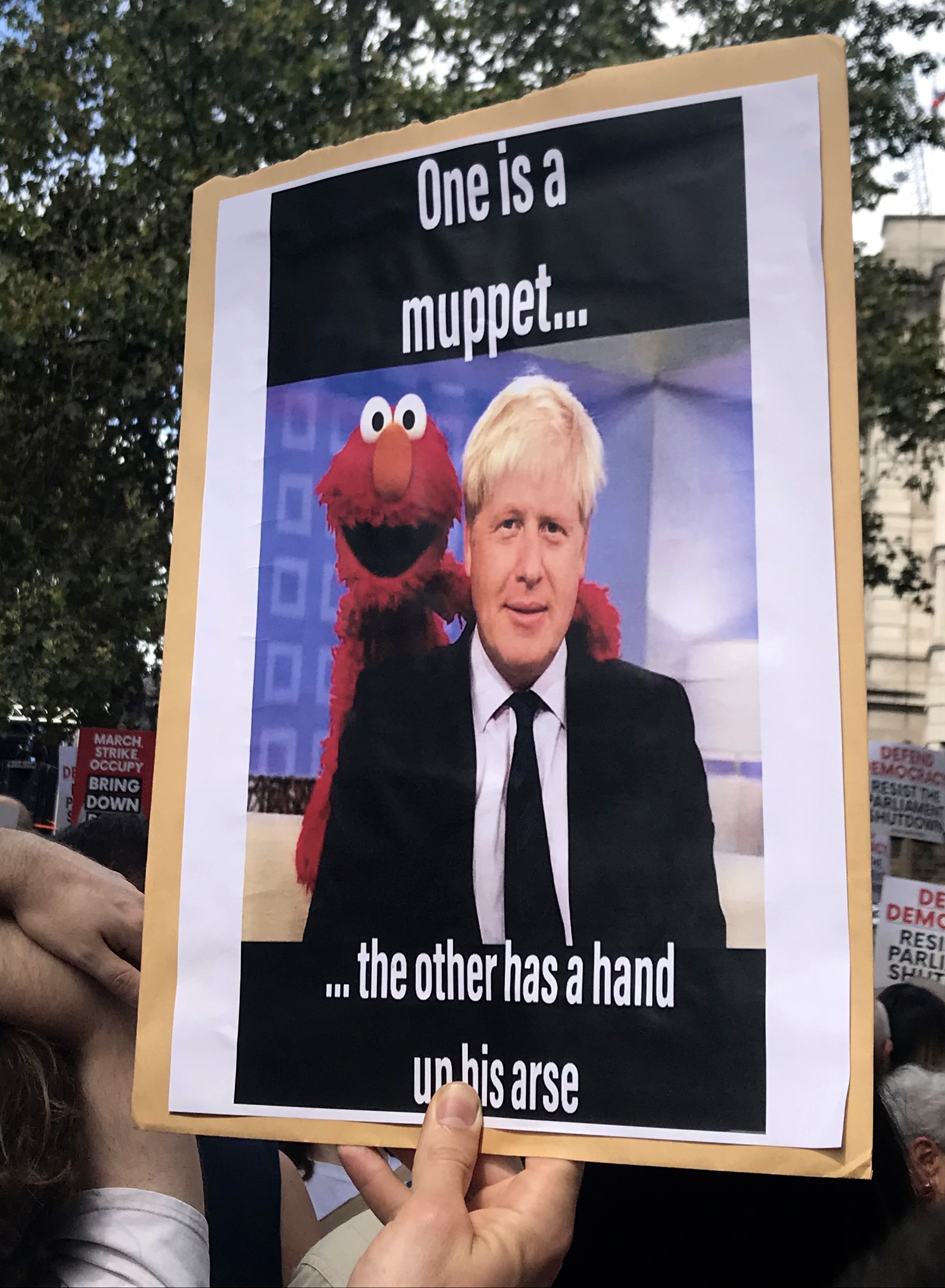 BoJo and a member of his cabinet – pick which one !